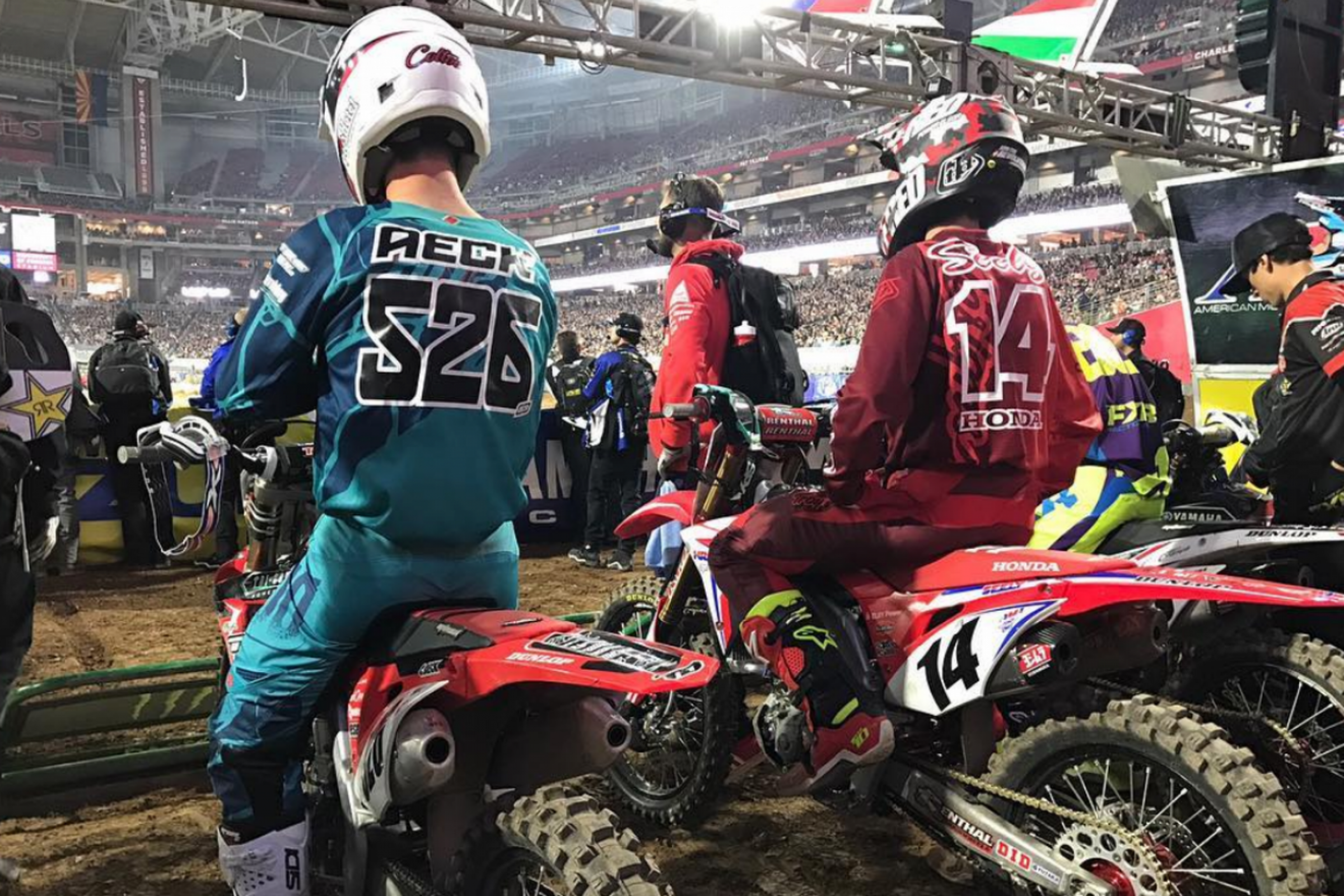 During his heat race at the Arlington Supercross in February, Colton Aeck experienced maybe the worst nightmare for many supercross riders. Aeck was forced to double-single a triple to avoid a rider in front of him. The rider behind him went for the triple and landed on squarely on top of Aeck. They both went down in a heap, but Aeck wasn't able to get up as he immediately lost feeling from his waste down. That didn't last long, though, as his feeling came back about an hour later while he was getting a CT scan to diagnose his injuries.

Aeck is now walking again, albeit he's a little more stiff now that is L2 through T11 vertebrae are fused, but he's walking. We caught up with the privateer to see how his recovery is coming along.

You seem to be recovering really quickly. Is that something that was a surprise to you and your doctor?
Yeah, it really is. You know, there’s so many guys that have had similar injuries and they never walk again. It’s been just over two months since I had surgery so to already be walking and getting around as well as I am, it’s been pretty shocking for everybody I think. I don’ think anybody expected it to go so fast.

Just wanted to give everyone an update and let them know how I'm doing. Had a brutal crash where I got landed on last night in Arlington. I ended up breaking 2 vertebrae, a few ribs and my shoulder. For about the first hour after my crash I had zero feeling from the waste down, I'm slowly getting some feeling back and am expected to make a full recovery. Going in for surgery tomorrow to have rods put in my back. I want to send a huge thank you to everyone for all the love and prayers. You guys are awesome! I'll be trying to catch up on all my texts and missed call in the next few days. I'm in pretty rough shape, but extremely grateful it wasn't worse. The lord was definitely watching after me last night. #glorytogod

Thinking about how serious this injury could have been, how relieved were you when you were first able to feel your legs again after the crash and then when you were able to stand up a couple days later?
It was the biggest relief of my life, man! It was incredible. I remember I was in a CT scan when I first started to be able to move my toes and I was freaking out and rolling around. [Laughs] The guys are telling me, “Hey, you gotta sit still.” I’m like, “Dude I can’t! I’m so excited!” At that point, it was kind of one of those things where like … okay I can move my toes, we’re gonna be alright. It’s gonna take a while but we’re gonna be alright. I’m gonna walk again. That was a huge relief.

What was your mentality when you realized you couldn’t feel your legs when you were laying on the track and then going to the hospital?
This is going to sound weird, but I wasn’t really surprised when I was laying there on the track and I couldn’t feel my legs. I never lost consciousness, I was awake for the whole thing so I knew exactly what had happened. I knew that it was going to be pretty serious no matter what happened. Getting landed on like that … it never ends good. It wasn’t necessarily a surprise, but man, it was scary. All the things that run through your head, all the things you’re probably gonna miss out on not being able to walk again. At the same time, that’s something that when you throw a leg over a bike you accept that risk and you kind of have to come to terms with it. It was super scary, but it didn’t last very long so it wasn’t as scary as it could have been.

Did you have a hard time watching that crash or was it something that didn’t bother you too much?
I never had a hard time watching it. I was actually excited that somebody got it on video because I wanted to see exactly what happened. [Laughs] I’m expected to make a full recovery and I’m planning to race again, so…. The thing that scares me is ever having to roll a triple again. I lay away at night thinking about rolling triples. It’s funny because I used to be scared to jump triples, now I’m scared to roll them.

So what’s the timetable looking like for you to make a return?
Well, as far as my spine goes most of my bones are healed at this point. I kind of get cleared to do pretty much whatever I want in another month. It’s just a matter of getting all my strength and all my coordination back, because it was a solid month before I was able to walk without crutches or without a walker or anything. I had to relearn the whole thing. My coordination and my balance is really bad … my legs are just super weak. It’s just gonna be a matter of time, you know? My goal is Anaheim 1 next year, but we’ll see what happens. Just gonna play it by ear and see how well I recover and see how quickly I can get my strength back.

After an injury like this, some people might question why you would want to race again. What’s bringing you back?
Man, it’s hard to explain it. I don’t know what it is. It’s just a passion, it’s just a drive I have. For the first week or two, laying there not being able to move my legs much and not having a ton of feeling, I had thoughts were I was like, oh I’m not going to be able to ride a motorcycle again. As things start to come around and you start feeling better … I don’t know. There’s just something inside me where I feel like I’ve got unfinished business. I haven’t accomplished what I want to accomplish in racing and I feel like I need to give it another shot.

I guess what they say is true, you never forget how to ride a bike. Today was great

Will there be any uneasiness when you come back?
Oh, yeah. For sure. Uneasiness from me, uneasiness from my family, and everybody involved. I know my parents are supportive, but they’re definitely scared to have me ride again. Same goes for me. I’m scared about it but it’s one of those things I feel like I need to do it.