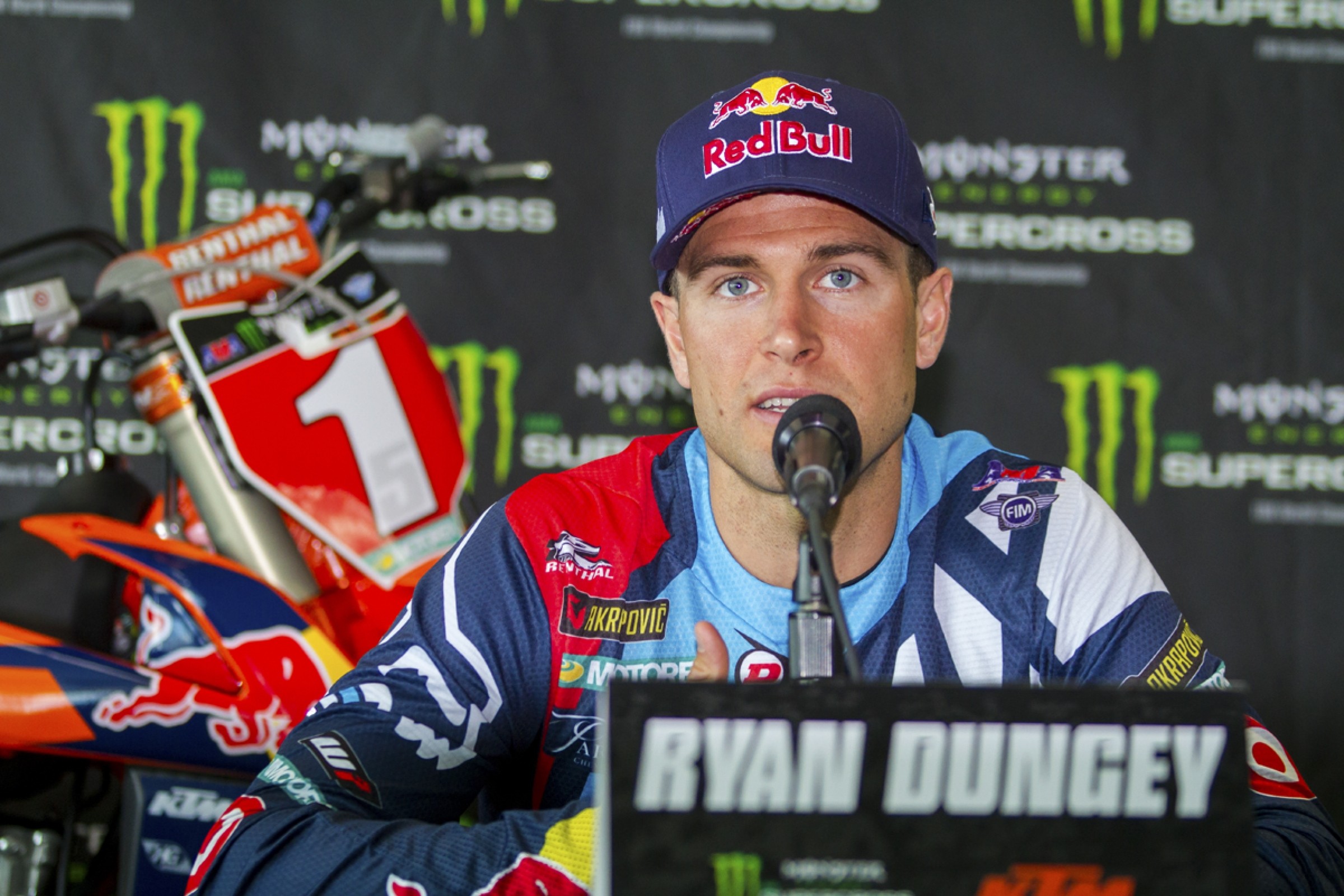 Red Bull KTM’s Ryan Dungey and Monster Energy Kawasaki’s Eli Tomac enter Round 15 of Monster Energy Supercross tied in points. Following the pre-race press conference yesterday at Rice-Eccles Stadium in Salt Lake City, Utah, we had the chance to talk with one of the 450SX co-points leader.

Racer X: You mentioned in the press conference you kind of had some time to reflect on everything. What’s kind of going through your mind?
Ryan Dungey: I think just the biggest thing is just we didn’t take time off as far as the riding and training. We’re still doing all that, the maintenance and everything that comes with it that we we’re doing. But I think just mentally kind of taking a step back. You know what it’s like. You’re there at the races a lot. So you’re on a plane Friday. You race Saturday and then you’re low on sleep back Sunday. So you kind of get in that routine. So it was good to just be able to know we got a weekend off. We can relax a little bit. We got started on some outdoor testing, which is always a nice change. It kind of switched things up a bit, get out of the normal. Then for myself just mentally to kind of get that break. Reflect on the season, where I could have been better, what I can do better these last three and just try to execute that. I think for the team as well all the personnel; we were able to try a couple things this week with supercross and the testing. It was a plus. It was small, little changes but things that can add up. If I can be a little bit more comfortable on the bike, and what we learned in outdoors we can maybe be able to apply a little bit that will help with supercross too. So it was a positive on all areas. You know Easter weekend, it’s a time with family and your friends and loved ones. When I’m always on the go I don’t really get to enjoy stuff like that. A lot of us riders don’t. That’s not an excuse, but it’s nice to just be able to enjoy your family and really just spend time with them and friends.

Speaking of enjoying things, you’re obviously under a lot of stress with the whole championship. Are you enjoying this process? Is this fun for you?
Yeah. Honestly, not that I want to say I brought it on myself but this is a moment in my career that, I don’t want to say I knew it was coming, but I was in the stands in 2006 when Ricky [Carmichael] and James [Stewart] and Chad [Reed] were all—this was the last race, and they were all within five points. I’m thinking, man, to be in a position like that and to be able to stand up to that pressure and to have the strength to not cave… I always thought, man, that tests a person. When all the eyes are on you and what everybody’s doing. So for me in this position, is it stressful? Yeah. Not to say it’s weighing me down. I’m still enjoying it, but there’s work to do. You’ve got to execute. The teams don’t pay you to get second—they pay you to get the win. Knowing this, and my goal lines up with theirs, but at the same time it’s like, this is a moment I need to embrace and realize and have the confidence and the courage to chase after it. We’re going to have tough competitors. Eli’s riding really good.

You had a lot to overcome last race with the first turn crash. Can you kind of just talk about that a little bit?
Yeah, I was actually feeling really good in Seattle. Things were kind of clicking. Practice felt good. We got 10 minutes. I adapted to the track really quick. The heat race was good. I was like, let’s get a good start and just go. Marvin [Musquin] got the start and you seen he rode flawless and came out with the win. I was hoping that we were going to be up there. Well, it didn’t happen like that. We had a tip-over. But I came back. I said, look, these are the moments I need to make the most of it right now. Pick as many riders off as we could, and I got up to fourth. So I think there was some good damage control. Going into the off weekend it was nice to know you’re not at a deficit. At least we’re tied. For me I was like, hey, that’s a positive. We’ll move forward. We’ll take a break and we’ll hit it harder these last three races.

Does your mindset change at all? Obviously you want to win and everything, but now that you guys are tied does anything change mentally with all that?
No. That’s where I think a lot of riders make the mistake of is putting all your focus and energy on… It would be wrong of me to put all my focus and energy on Eli, the championship, where he’s at on the track, what am I doing, what he’s not. Where I need to just do what I’ve been doing—focus on myself, the track, execute. Eli’s his own person. I can’t control him. All I can do is myself. These last three races, like I was saying there, it’s just like what I meant taking them one at a time is just living in the moment and getting the most out of each and every individual race. With that, I should be able to give it my best.