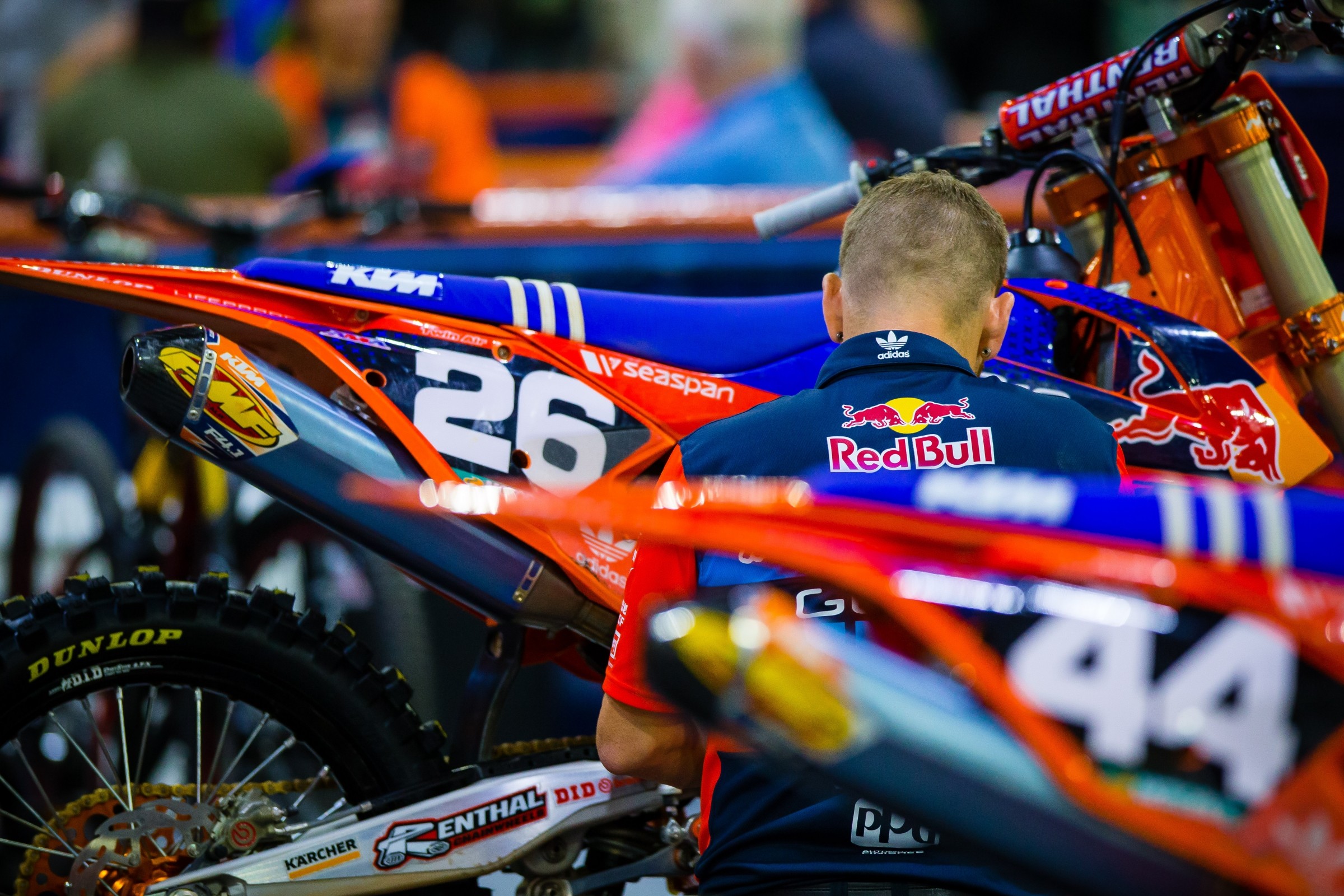 During KTM’s renaissance period, which dates back to Ryan Dungey signing with the brand for 2012 and delivering the first-ever premiere class wins in Monster Energy Supercross, nearly everything the brand has touched has turned to gold, including the white gold over at Husqvarna. KTM has added titles it could never previously even contend for—Dungey and Ken Roczen delivering 450 championships in the U.S.—while also continuing a stronghold on its traditional power bases in off-road and the FIM World Motocross Championship (Jeffrey Herlings and Antonio Cairoli certainly representing the brand well). Through it all, there’s only one thing the brand hasn’t been able to accomplish: it has yet to bring an American talent all the way through the amateur ranks, into the pros, and produced victories on a 450.

This has become a proven and repeatable formula for other brands, starting with the legacy of Kawasaki Team Green, which provided the factory unit with names like Ricky Carmichael, James Stewart, and Ryan Villopoto, to Team Honda HRC riding the GEICO Honda wave with the likes of Trey Canard, Justin Barcia, and Eli Tomac (and also Cole Seely from the Troy Lee Designs Honda 250 team), or even Yamaha, which rebuilt its farm system under the Blu Cru banner and now has Cooper Webb competing at the top level. KTM’s 250 program has used a different set of rules, mainly by importing big talent from Europe (Roczen, Marvin Musquin) to do the winning.

The brand took a big step two years ago when it convinced Troy Lee to switch his program from Hondas to KTMs, and it made an immediate impact when Jessy Nelson won Anaheim 1 in 2015. Deeper down, though, there was a longer-term plan in place. Red Bull had never had an official pro spot to stash the amateurs it helped bring through the ranks, and that’s a major reason why Webb, who Red Bull believed in deeply, got away. There simply wasn’t a place to put him; at least not in the same way that Monster Energy has a direct tie in with Kawasaki, and Rockstar Energy Drink has connections with both Star Yamaha and Husqvarna.

They won’t get fooled again. With Red Bull’s KTM connections now starting with TLD and going all the way through the full 450 factory team, the next Cooper Webb won’t get away.

All those connections come further down the line, though, starting with Sean Cantrell, who will make his pro debut at Hangtown later this year. First, TLD KTM had to overcome some adversity. For 2016, Red Bull KTM became a 450-only unit, and it was up to Troy’s squad, led by team manager Tyler Keefe, to handle all of KTM’s 250 activities in the U.S. Last year was a struggle, though, and Keefe admits that he was under some pressure from the bosses to perform. Through all of last season, the team didn’t produce any race wins. [Update: Justin Hill won in Toronto. We incorrectly stated TLD KTM did not get a win last year.]

Keefe says the biggest problem was that his two best riders—Jessy Nelson and Shane McElrath—were hurt nearly all season. Nelson took second at Anaheim 1 last year, then crashed a few days later and missed the rest of supercross. McElrath broke his wrist during the off-season and barely made it back in time for the 250SX East Region, and he struggled getting back to race shape.

Only by the halfway mark of Lucas Oil Pro Motocross did McElrath finally find his regular speed, and he was battling for podiums for a few weeks until a huge crash at Southwick ended his summer. A few weeks later, Nelson was back following more injuries, but then his season ended tragically with a back injury at Unadilla. Yes, a tough season for the team all around.

This season started much better, with a healthy McElrath winning the first two 250SX West Region races. A mechanical problem while leading in Arlington and a crash during practice in Seattle have likely sapped his chance at winning the title, but his wins and podiums have certainly put the team back on the right track.

Meanwhile, in the East Region, the team has found a big puzzle piece. Jordon Smith was a prospect for someone else—GEICO Honda—but he and that team chose to go their separate ways at the end of last season. TLD snatched him up, and it now appears he’s figuring things out, winning the last two East Region races. On the record, Smith will only say of his old Honda and his new KTM that he “likes having electric start” but no doubt he’s stepped up his consistency so far this year. That’s the thing about the young talent in the 250 class—they can suddenly find “it” at any time, and every team just wants to have that rider when it happens. The roll of the dice played out in TLD’s favor this year, just in the opposite way that it worked with Nelson and McElrath a year ago.

By the way, they’ve got a tail gunner in Mitchell Oldenburg, who has now clawed his way from privateer to podium guy. The team is bearing fruit from all of its branches.

Now, will it finally get that 250 title KTM has entrusted it to get? Will it become the same haven for American fast kids that Monster Energy/Pro Circuit Kawasaki, Yamalube/Star Racing Yamaha, and GEICO Honda can claim to be?

Certainly seems like things are trending in the right direction.