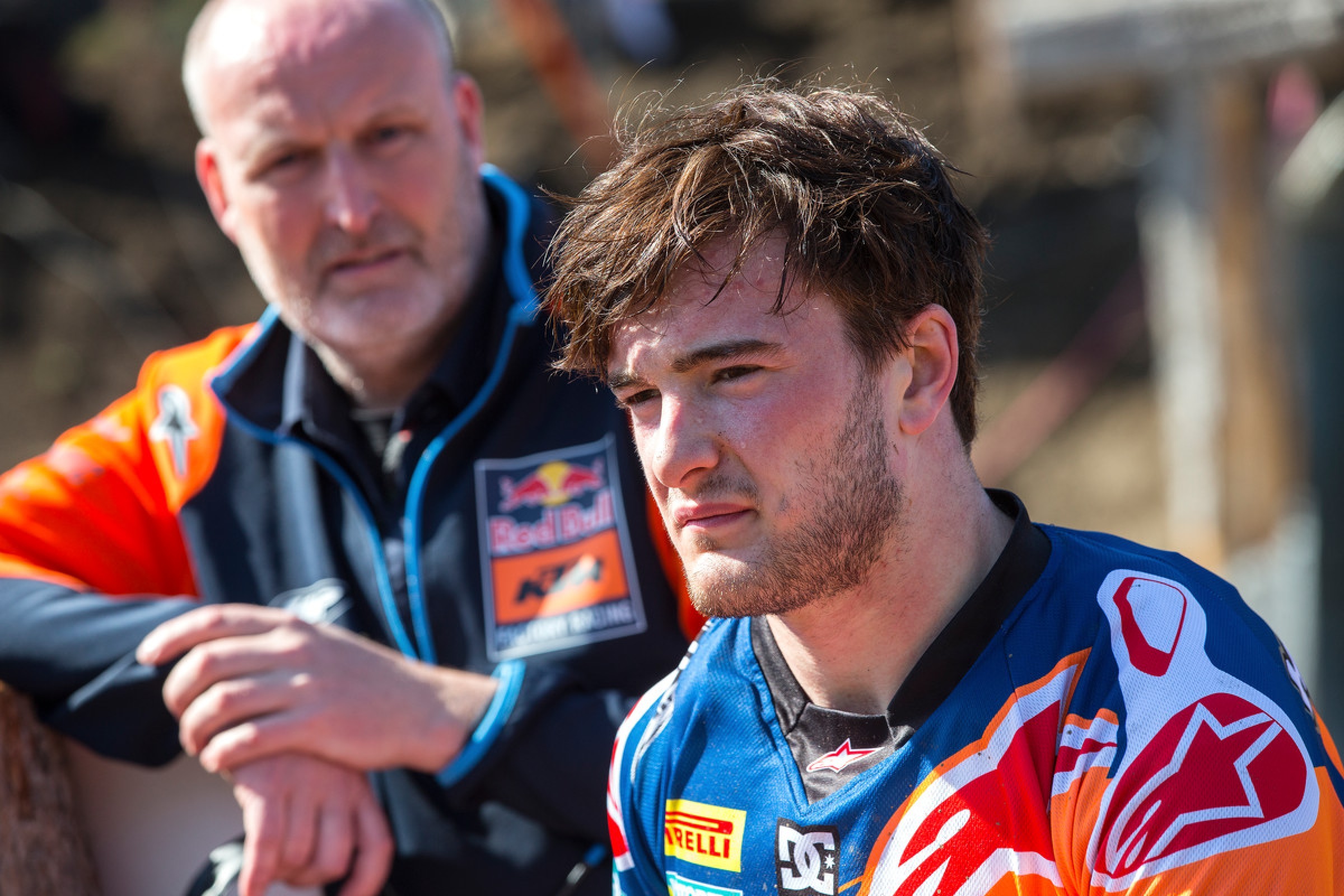 Strange times for one of the most prolific motocrossers on the planet. On Sunday in Italy for the Grand Prix of Trentino and round five of the FIM World Motocross Championship, Red Bull KTM’s Jeffrey Herlings saw a small ray of light in a debut MXGP campaign that has tested the 22-year-old’s confidence and belief in his once formidable abilities. A positive start in the second moto across the slick Italian hard-pack led to a fourth place finish which is the best finish so far for the Dutchman who claimed three world titles in seven MX2 seasons and lost another two due to injury despite point leads well over 100.

Herlings entered 2017 on a high—his drive to finish second and help the Netherlands to a memorable podium at the Motocross of Nations hinted at swift adaptation to the KTM 450 SX-F. By all accounts his speed was superior during pre-season tests but then a bout of wrist tendonitis and a broken hand only days before the first Grand Prix in Qatar cast him to a dark place. We chatted to him just before the Trentino motos.

Racer X: Jeff, are you in crisis?
Jeffrey Herlings: Actually, I don't know—that’s the worst thing! For some reason it is all going wrong for me with the starts. I haven’t pulled a start inside the top 10 and in this class—it doesn't matter who you are—it is hard to go from 20th to first. I don't know why it is happening but [Antonio] Cairoli and Glenn [Coldenhoff] are on the same bike and are pulling holeshots. I think once I am at the front at the beginning [of races] then I won’t be winning but we’ll be closer to the podium and get in positions where I am more comfortable. Now it is eithth to 15th and that is not where we want to be. It just takes time.

You are so used to winning—ever since you’ve been in GP—is this a different taste of racing?
Erm, it’s different. We’re used to winning for five-six years straight—really dominant—and now we are not even close. It is more of a mental shock. I think once I get back to the pace where I need to be and have a few good motos then I’ll be back. I am waiting for a few good results in a row.

What about your confidence then?
It’s gone. Confidence goes really quickly but it also comes back pretty fast. I’ve had a few sh***y races, but after a few good ones then it’ll be back. When I dislocated my hip I was over racing and I came back and kinda won everything again and the sky was the limit for my confidence. It’ll come back once the results come. This is just a learning year. The championship is over and we just need to get better and better, learn the bike, learn about the competition.

Saying the championship is over must be a very new experience for you. Even with a broken leg in Mexico for the last round of 2014 you were still in contention.
It was a different situation because there was one race to go and we still had the points lead. Now we are 100 points down and we’re only four races in—and not looking that good. There is a lot of work to do. It is not the team or the bike. The bike is perfect and for sure there are still some adjustments to be made, but the team is very capable of winning. The only missing piece is me at the minute. But we are close to the top five, and then we can look at the top three and think of winning. I am very convinced we will get there.

You may have shone at the Nations but the season-start was difficult for you—broken hand, much hype, and pressure to be another rookie winner. Did people underestimate how tough it has been for you?
That’s for sure, but I also underestimated [things]. I only had a couple of weeks on the bike after breaking my collarbone I was second at the Nations and then looked at things too easily. I underestimated the class, the bike, the competition and I’m paying for it now. All winter I was thinking “I’ll do this, do that” [winning] but I quickly realised I was on a 450 program now and it is tough. All those years winning in 250s … it’s different here, man. It’s hard. Different guys, different attitude. It will take some time. I don't know a date when it will happen.

Home GP next weekend and you’ve never been beaten there….
That's a date. It feels like a make-it or break-it for this year. If I’m not on the podium or top five there then it will be a very long season. When I crash then it is different, but if I start okay and don’t make the top five then something is missing. Nobody really knows what is going on. We have turned the bike upside down and back again and have been trying new things and analysing things. On the 250 we didn't analyse anything. We just went to the gate and frickin counted on a holeshot or top five start and dominated. So it shows weakness, but the stupidest thing I could do right now is clean myself out and end up with an injury. It is better to accept my situation and work on it and keep growing. You see it with [Eli] Tomac, man; for the first rounds that guy was really off but turned it around and started to dominate and smash the rest of the field weekly. You can see how fast things can turn around. [Ken] Roczen is another example. Things can change in this sport so quickly. I was so dominant and now I’m not where I’m supposed to be.

Is it hard to enjoy racing at the moment?
Definitely. After winning for so long to go to a race and be seventh or 12th. It doesn't feel like how it used to. I used to roll up and think “Lets go racing, let’s go win.” Now it is like I am just competing. I know it [his form] is there. The results I showed before and the talent to do that—it’s not gone. I know that. It is just a matter of time and when it comes together then it is go time. In the meantime I think I’ve been mature about things and not done anything silly on the bike. This is probably the only positive thing this year so far. To go crazy, close you eyes and see if you can survive a moto is not a solution. We just need to be smart because I know I have a great team and bike behind me. I just need to bring the final touches and get those starts dialed-in.