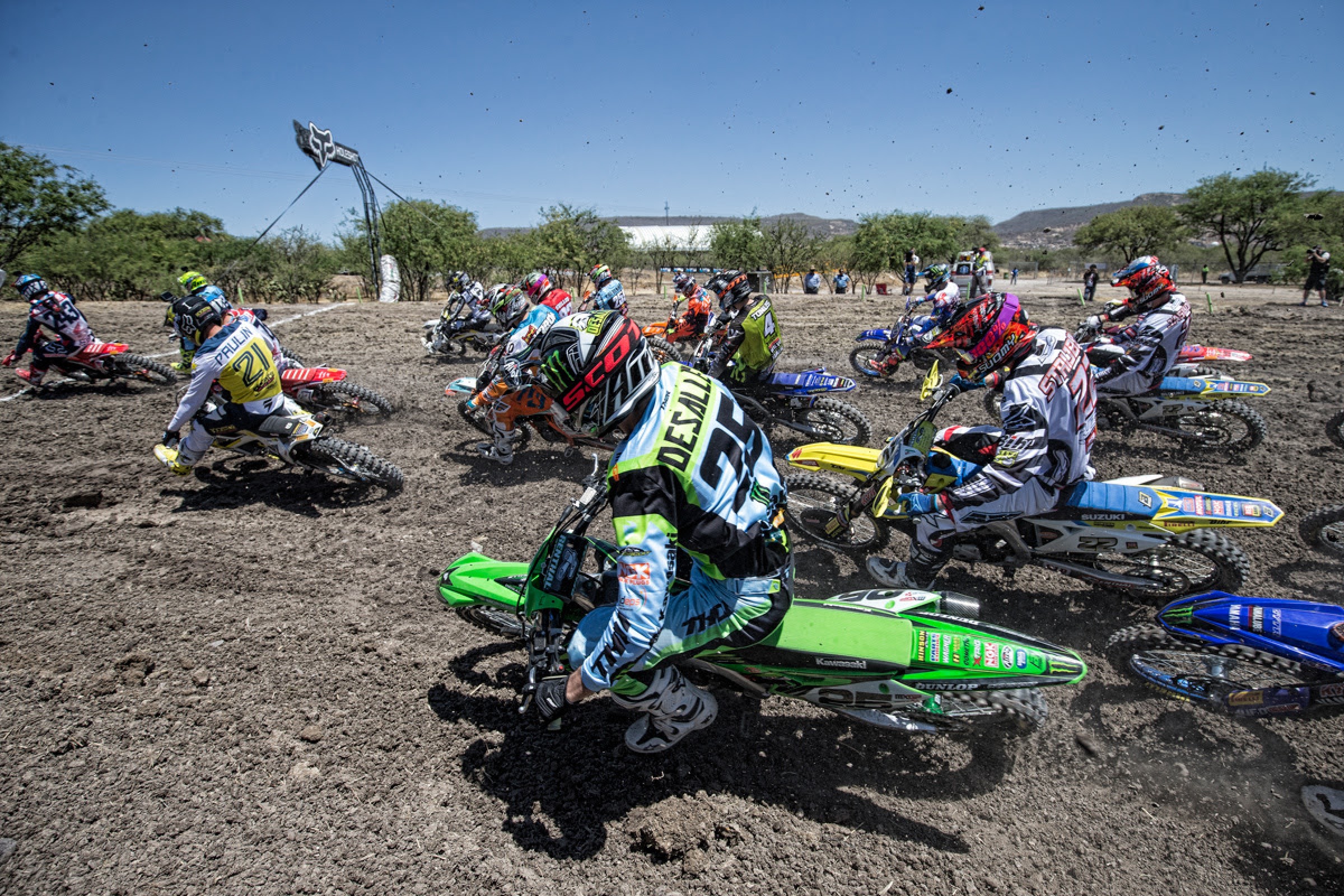 MXGP World Champion Tim Gajser extended his form from a 1-1 finish in Argentina two weeks ago to rule the fourth Grand Prix of Mexico at Leon with a similar type of sweep: pole position, a set of motos, and a formidability that is proving unmatchable, even for an athlete like Red Bull KTM’s Antonio Cairoli.

For American fans—even some that made the trip over the border—there was joy at seeing the rebound by Rockstar Energy Husqvarna’s Thomas Covington. The 21-year-old had previous success at Leon with an unexpected maiden win back in 2015 with Monster Energy Kawasaki in rain-hit conditions. But a second moto triumph on Sunday underpinned this latest success and could thrust the Alabama native into the fray at the top of the standings in the coming rounds.

The surroundings of the circuit in the Metropolitan Park, deep in the city of Leon, might not be too inspiring, but the track itself is a curious creation. A mix of dirt made for long and deep ruts and combined with slick hard-pack, meant the riders almost ebb and flow between the speed of the flatter sections and technicality of scarred corners. On Saturday some overzealous watering drew some withering comments from the riders, and crashes for KTM’s Glenn Coldenhoff and Monster Energy Yamaha’s Romain Febvre were two newsworthy incidents. Coldenhoff in particular was extremely lucky to walk away with just a tweaked left shoulder that hampered his riding for the motos, as the dismount could have had far worse consequences.

Better work on Sunday produced more lines and options, but grip was still at a premium. Warm temperatures helped bring the crowd through the gates of the park, but it was a windy day and the altitude of the Guanajuato region continues to catch teams looking for refined engine set-up and performance, and riders coping with the thinner air. Cairoli, an asthma sufferer, felt the effects as did Yamaha’s Jeremy Van Horebeek in the second moto—the Belgian was fifth overall and couldn’t run the same pace as he did in Argentina two weeks ago when he was on the podium.

Mexico saw another virulent outing by Gajser. The Slovenian has shaken off the virus that plagued him in the first two rounds, as well as some of the pressure in knowing that an overbearing No.1 was hidden somewhere in the distinctive #243 on the factory Honda. The 20-year-old’s synergy with the new CRF450RW cannot be understated either. The bike seems to track well to his demands: punchy exiting corners, stable, agile, and it rasps out of the gate with impressive consistency.

Last year Gajser was an MXGP debutant but with plenty of laps under his belt with a stock 450 as the bike was a preferred training tool, even in his MX2 tenure. This year he is the picture of maturing potency: new bike, new form, new motivation. Mistakes will undoubtedly come but as is the case with Maverick Viñales in MotoGP, Eli Tomac in SX, Jonathan Rea in World Superbike, someone has to up their game to put pressure on the championship leader and give him a proper test. In Leon he coasted to victory by 15 seconds in each moto. Although he claimed that Cairoli kept him on his toes in the second outing.

“I need to find a good start to stay with him because he is always there one, two, or three and this is a really big advantage in motocross at the moment,” Cairoli said in the paddock and in reference to the roughening natures of the new-build tracks at the flyaway races.

Third on the podium was Gautier Paulin. Usually one of the most hyped riders in the class, the Frenchman has been the epitome of steadiness on the Rockstar Energy IceOne Husqvarna so far and this was a deserved first podium with the FC450. Gautier is fifth in the standings and 44 points behind Gajser and just 20 from Cairoli who is in second. Rather than blazing away at the front—as he was expected to do in his high-profile union with HRC for the last two years—Paulin seems to be building into the season and that attempt at a calm, long haul approach could prove shrewd for a rider that normally struggles to make the end of the calendar.

Second HRC rider Evgeny Bobryshev was one of a small band that elected for 10 days of riding and training in the United States after Argentina as opposed to flying back to Europe and that sharpness was evident with a strong performance to second in the first moto. Several crashes and mistakes in race two proved to be the Russian’s downfall and left him in sixth. A worthy mention to Wilvo Yamaha’s Arnaud Tonus who came through strongly to fourth in the second race for the same ranking overall and in just his fourth MXGP appearance—the technical and jumpy demands later in the day finding the Swiss in a promising zone of speed.

Leon might have been in a far drier state compared to when he won the race in 2015, but Thomas Covington still ripped through the clayish mud with renewed purpose. It’s fair to say that results of 16th, 13th, and 14th were not what he expected in the first fixtures of 2017 and the start of an MX2 campaign in which he had been the sole winner in the class. Covington benefitted from some days at home to get focussed for Mexico and the brief stay paid off.

“It helped me being at home for a little bit and around the family; it put me in a good place mentally,” he said.

He shadowed Red Bull KTM’s Pauls Jonass and moved past the Latvian (racing with stitches in a nasty open wound in his left arm courtesy of a crash on the last lap of warm-up that morning, and the effects of the anaesthetic meant the Qatar and Argentina GP victor struggled for feeling) to scratch off a confidence-boosting first win of the year. Covington had proven himself on familiar ground and gave Jacky Martens’ Lommel-based team reason to cheer as well as another victory for the prolific MX2 squad. His speed has rarely been in doubt, but Covington will face the microscope at the next two rounds and two quintessential European tracks with the scratchy and compact Italian hard-pack at Arco up next and the Dutch sand of Valkenswaard to follow. It’s vital he continues a front-running attitude and performance level in order to creep into what is a very open dice for the MX2 crown in 2017.

“I’ll keep following the program. The problem in the past hasn't been my training or anything [like that] but just my race pace, so I just need to keep on getting those good starts like I did this weekend and I’ll be alright,” he said.

Sitting on the throne momentarily is Suzuki’s Jeremy Seewer, who attacked the Mexican lumps with gusto for the first moto checkered flag. His fourth place at the second time of asking meant that he ceded Grand Prix honours to Covington despite the same scorecard. The Swiss has an eight-point gap over Jonass, but then the picture starts to spread and Covington needs to work on a 70-point deficit down in eighth place.

KTM privateer Julien Lieber just edged out Jonass for the final podium spot, for what was his third podium appearance of the season to-date. There was some sympathy for Kemea Yamaha’s Benoit Paturel who went 2-8—an early mistake in the second moto ruining another push for the champagne and a slice of misfortune similar to his experience in Argentina.

Back to Europe then. Aside from a haul to Russia in early June, MXGP won’t have to worry about major miles until the Monster Energy GP of the USA in September. The first Grand Prix for fans on the mainland will happen in the vast shadow of the Italian Dolomite Mountains on Easter weekend.