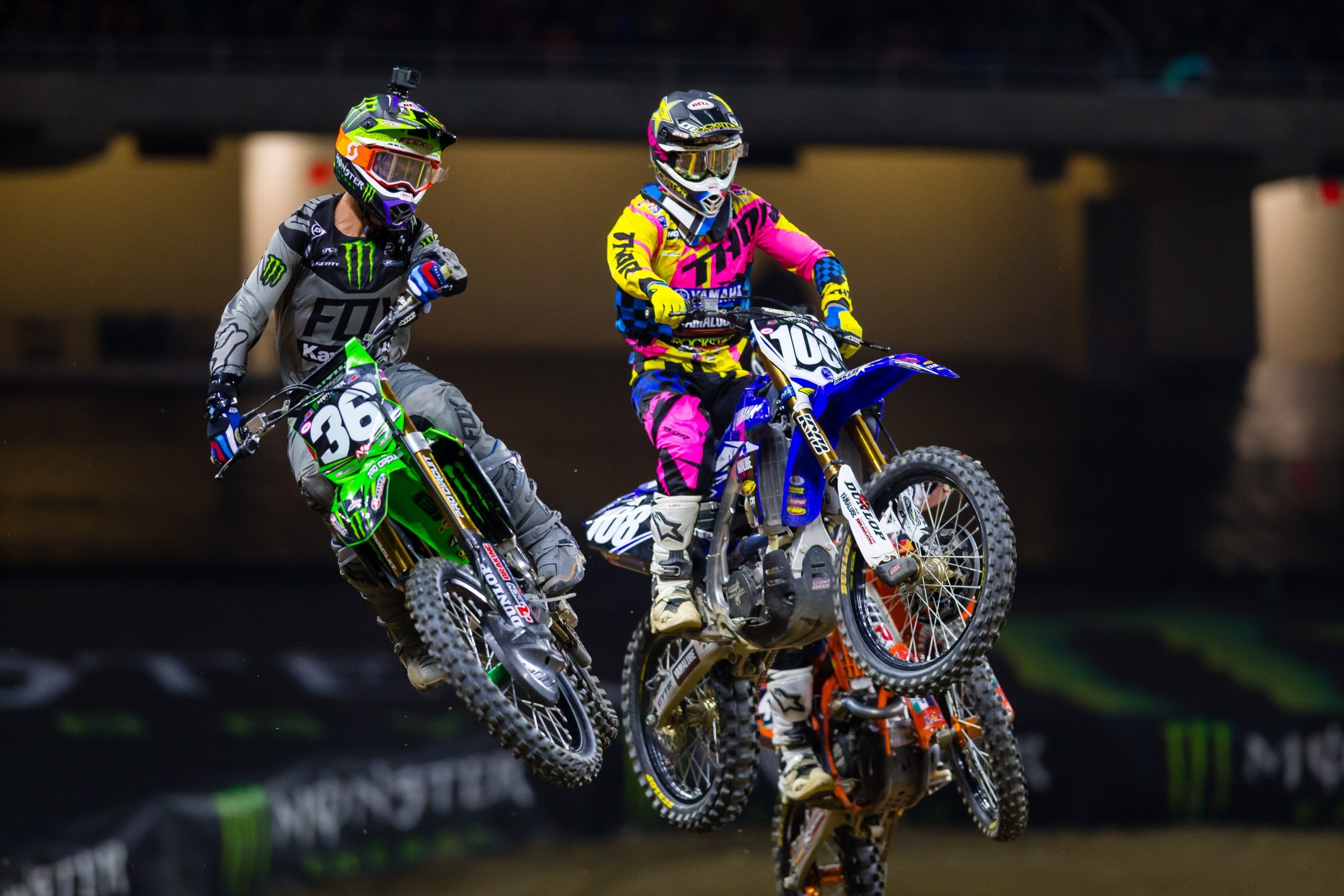 Watching these 250SX East Region races has been something, hasn’t it? We have gotten a little bit of everything. We’ve seen big get-offs, take-outs, heated podium altercations, fines and penalties, and even a pit stop by the points leader. It has been must-watch entertainment with no predictability whatsoever. Every time there seems to be some pattern developing, fate flips that on its ear. Whether it’s practice or racing, these 250 boys are showing their age and inexperience each and every week.

Pre-season favorite Joey Savatgy jumpstarted his championship with a win in Minneapolis, but leaving Minnesota, it was apparent that Zach Osborne was inbound. His pace was clearly a step above the pack even though he finished third. Wacko Zacho made good on that speed a week later in Atlanta, winning his first ever 250 supercross and further backing it up with another win in Toronto. Behind him, Savatgy and Adam Cianciarulo were all over the map. They both had huge crashes in Toronto and were lucky to leave unscathed, but then Cianciarulo won Daytona, followed by Savatgy no less. Adding to the chaos was dark horse Jordon Smith who seemed to be ready to shake up the championship until Dylan Ferrandis chauffeured him right off the racetrack and into the Toronto soil. Ferrandis would prove to be the downfall for several riders, and he’s not making any friends on the track during his debut season in America. And what about the other pre-season favorite Christian Craig? Christian seemed to suffer from can’t-get-right syndrome. In other words, everything he did in his main events seemed to be wrong.

For all of these guys, they’ve had ups, downs, and everything in between. Amid the chaos, Osborne looked like he was on his way to a championship going into Detroit. He bounced back from a tough Daytona to win Indianapolis and pushed his points lead back to nine. Once again though, the script was ready to flip again. Osborne crashed on the start and needed a new front wheel, putting him a couple of laps down and out of any serious points contention. Smith, who had never won a main event before, took advantage of a Savatgy crash to take the victory. Even with the fall, though, Savatgy would re-take the points lead with Osborne, Cianciarulo, and Smith all within 11 points.

I wrote all of that and I’m still not even sure if I understand the twists and turns we have seen thus far. It has truly been chaos defined and any attempts at predicting the next U-turn have proven foolish at best.

Even in practice, drama has been high. Osborne and Cianciarulo had a nasty Indianapolis run-in, leaving AC with a knee injury to deal with. Osborne would further up the tension with an aggressive pass on Savatgy in the main event. Savatgy and team were at DEFCON 1 near the podium, clearly frustrated with SX going full contact. They haven’t been alone, though.

This past weekend in Detroit, Christian Craig lowered the boom on Alex Martin in qualifying practice. Craig was frustrated with Martin after interrupting his fast lap and sent him careening onto the start straight. It was a wild crash made worse by the clear footage showing undeniable intent. Troy Lee Designs/Red Bull KTM team officials were livid and rightfully so. In a clear message by the FIM to calm these tumultuous East Coast waters, Craig would walk away with a $3000 fine and last gate pick in the main event. Poor Alex would miss the night’s racing after his big crash. He is also out for this weekend in St. Louis.

The interesting thing about all of this has been the most obvious fact: It has all been avoidable! There are so many aspects of supercross racing that are simply left to chance. Riders make split second decisions that turn out poorly, but there is usually no one to blame. Racing incidents just come with the territory. All of this 250 craziness, however, falls into a different category. This has all been a result of poor decisions and lack of patience. The Osborne/AC incident was born from both riders trying to lead practice. Yes, I said lead practice. Newsflash, guys, no points are paid for leading practice. When was the last time you saw Eli Tomac jockeying for position and putting himself at risk on the opening lap of practice? That’s right, the correct answer is never.

Even more absurd is that the fastest laps never come from the opening laps of practice! The 250 riders are beating on each other, taking big chances, and it’s not even accomplishing anything. Similarly, Craig ruined his night by going for the jugular on Martin in practice. He let his frustration get the best of him and it cost him any chance at success, along with $3,000. Painful for A-Mart, costly for Christian and his team, and worse yet, completely avoidable.

I’m no genius, but I think there are lessons to be learned here. Wise decision-making is a learned art. Champions Ryan Dungey and Ryan Villopoto both had their own wars with Jason Lawrence in their 250 days. Marvin Musquin and Cooper Webb also aimed their front tires squarely at each other more than once before moving up. These are silly mistakes that they all would look back on and probably shake their heads at. Dungey’s inability to rise above J-Law’s antics cost him a title in 2008 and nearly cost Villopoto a front wheel at Hangtown that same year. Maturity comes at different times for everyone and as these 250 riders continue on in their own careers, the quick learners will reap the benefits. Eli Tomac and Ryan Dungey are embroiled in a world-class battle, yet they have learned that getting involved in high risk scenarios is a losing play. They don’t give other riders reasons to retaliate. They don’t waste their time trying to win practice. They have learned to focus on the important tasks at hand and leave the games to the kids.

As for me, I am nothing more than a fan sitting back with my popcorn and watching the fireworks unfold. I have no dog in the fight so if the 250 riders want to start a fight every weekend, who am I to complain? But as someone who raced this series 16 times, I also enjoy seeing these 250 riders grow and evolve. I was around Ken Roczen when he was a 12-year-old German prodigy and watched his rise into super stardom on a world stage. I have watched Ryan Dungey, a B rider making an improbable jump to the pro class, blossom into one of the best racers ever. These current 250 riders are in the midst of that rise. They are learning the lessons that will mold them into wise, seasoned 450 champions. For now, though, they are rough and tumble youngsters with far more exuberance than wisdom. They truly are the youth gone wild.