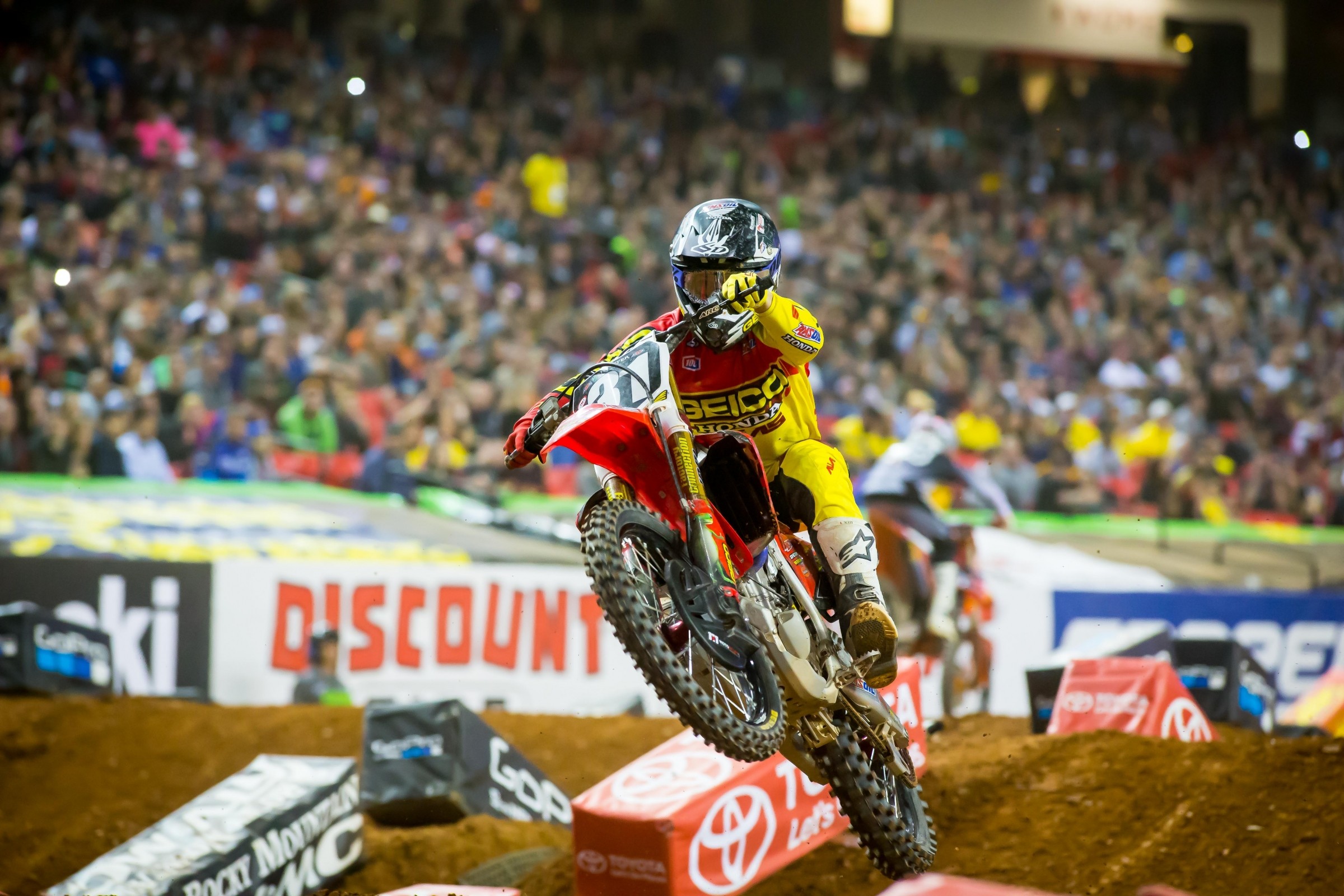 Comment: Aeck is working on being ready for 2018 after sustaining two fractured vertebrae, some broken ribs, and a broken shoulder in Arlington.

Comment: Albertson sustained a number of injuries in Daytona including: fracture of the manubrium and body of the sternum (posteriorly displaced by 1cm), fractured T5 through T7 vertebrae, compression of the T4 through T6, epidural hematoma at T5 (epidural space is the outermost part of the spinal canal), bilateral patchy lung contusions, and a left metacarpal fracture. Jimmy is back home in Oklahoma after undergoing one surgery in Daytona and is expected to make a full recovery.

Comment: Catanzaro went down in spectacular fashion in the LCQ last week when Cade Clason got into the back of him right before the finish line. On Instagram Catanzaro said he had some holes in his arm from his footpeg, but would be ready to go for Detroit.

Comment: Peick had his cast removed on Wednesday and is expected to be ready for the beginning of Lucas Oil Pro Motocross.

Comment: Roczen is out indefinitely after a big crash at Anaheim 2 left him with injuries to his wrist, elbow, and radius (forearm). We recently talked with Ken at his home in Florida and got an update on his recovery.

Comment: Webb will return to action this weekend after sustaining deep bone bruising in Minneapolis.

Comment: Archer crashed in his heat race in Indianapolis and sat the night out. In an Instagram post he said he was taking the steps to be ready for Detroit.

Comment: Bisceglia broke his leg while practicing at Glen Helen. There is no hard timeline on his return, and Kyle Cunningham will fill until then.

Comment: Bloss is expected to return for Lucas Oil Pro Motocross after dislocating his shoulder and fracturing his humerus bone in Minneapolis. Dakota Alix is filling-in for the remainder of the East Region.

Comment: Bowers is working toward being ready for Seattle after fracturing his right femur in Glendale.

Comment: Gaines broke his collarbone in Minneapolis. He had it plated and hoped to be ready for Daytona, but wasn’t 100 percent. The team said on Instagram this week that he is expected to return for the last two rounds of the East Region.

Comment: Hampshire should be ready to go for Lucas Oil Pro Motocross after fractured his tib/fib in Toronto. He provided an update on Instagram this week.

Comment: After missing the last two rounds due to a cut on his hand, McAdoo will return this weekend in Detroit and make his GEICO Honda debut.

[Update: GEICO Honda has announced that McAdoo will miss the next two rounds and hopes to return for East Rutherford.]

Comment: Nichols tore the MCL off his tibia and suffered a small fracture to the tibia while practicing. He’ll miss the rest of Monster Energy Supercross.

Comment: TiLube/Storm Lake Honda's Fredrik Noren is also out for Detroit. He hopes to return in St. Louis."I'm sad to say that I will not be racing today, last weekend at Indianapolis I took a bad digger and I am pretty banged up, thankful to God it's nothing really bad and should be racing next weekend again at St. Louis!"

Comment: Nicoletti dislocated his ankle, shattered his heel, and fractured his lower fibula on press day in Arlington. He’s in therapy but is unable to put any weight on his heel for another month. The team says he may be able to return to racing toward the end of Lucas Oil Pro Motocross.

Comment: Taft is expected back for Lucas Oil Pro Motocross after suffering a concussion before A2.