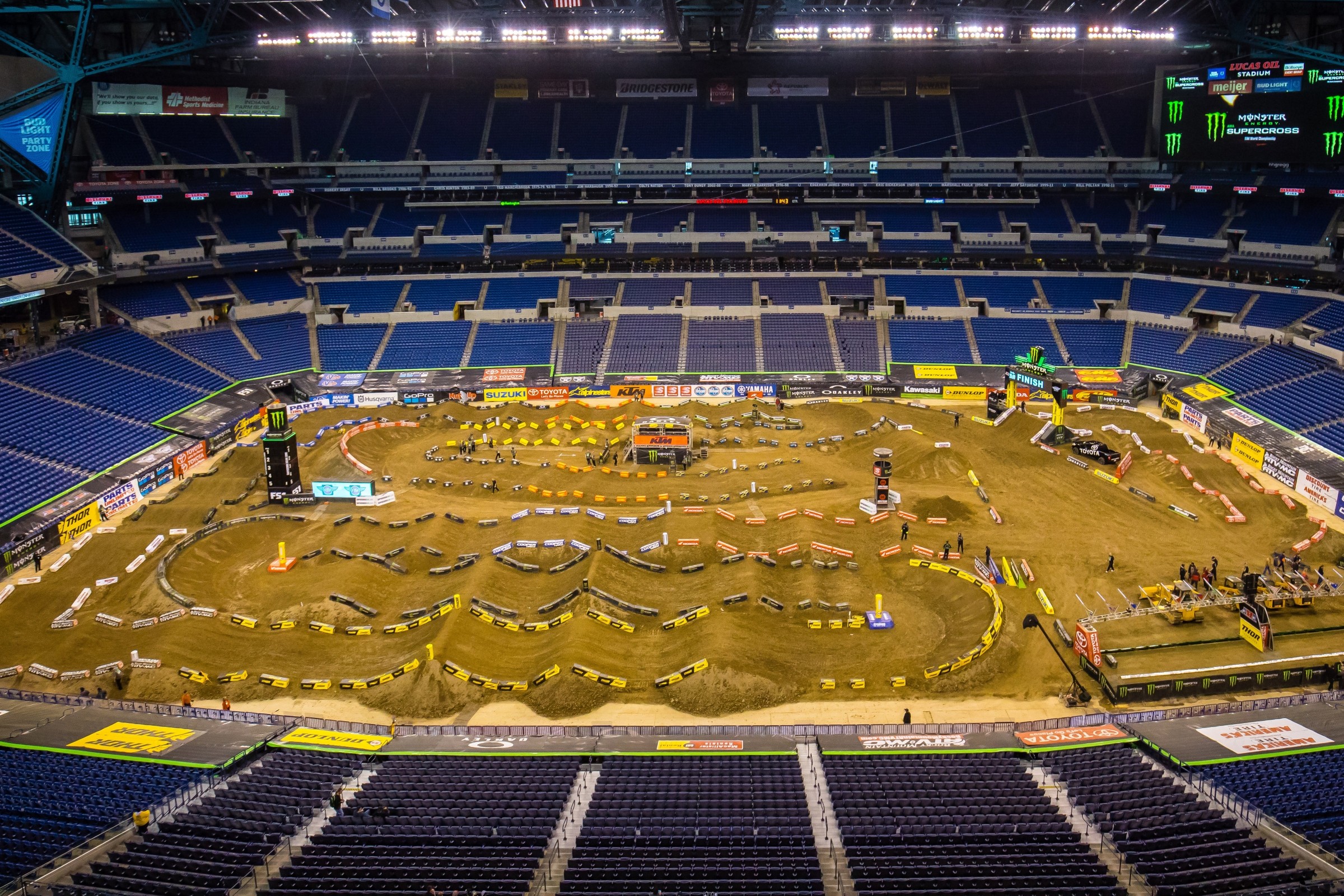 Indy has come and gone and there were plenty of storylines. From Eli Tomac cutting Ryan Dungey’s points lead down to 12 points to Zach Osborne’s eventful route to a win in the 250 main event to Cade Clason and AJ Catanzaro almost knocking down the scoring tower to Ryan Dungey’s interesting post-race comments, Indy had much to offer. All of those could be the subject of this column, but I want to talk about something a little more technical and riding specific. There was a section on the track that caught several riders in exactly the same way throughout the day and night. Alex Martin crashed there three times on Saturday, Justin Barcia crashed there in the semi race, and Blake Baggett crashed there in the main event. The interesting aspect was that their crashes were almost identical and due to the same factors.

The section in question came just after the finish line. There were seven jumps with a bend to separate the first three from the last four. The first three were pretty basic. Most riders either wheel-tapped or tripled these and then set up for the final four. The fastest way to get through those last four was to jump them all in one swoop. Most of the elite riders were doing this. The problem arose when braking bumps started forming on the landing, and that was caused by everyone trying to stop for the berm.

Riders had to hit the quad jump at high speed in order to clear it, so to stop, the riders had to brake hard, specifically with the front brake. Braking with the front brake is paramount in stopping. The rear brake is helpful but too much rear brake will do one of two things, cause a slide or a stall. To stop quickly, both brakes must be used but of those, the front brake is much more efficient, because with so much weight shifting forward under hard braking, the rear tire often doesn’t have enough weight on it to get good traction. Further, the front brake is more progressive due to a much larger disc and more proactive application with the front brake lever. After so many riders it the brakes so hard so many times, the soft dirt began to give way and become uneven, disrupting the suspension and also the front tire’s contact with the ground. Add in a hard lean angle and you have a very difficult task for the front tire. Pro riders learn to trust their front tire more than most amateur riders. As those bumps form, the front tire intermittently loses touch with the dirt and begins a slide-then-catch routine before slowing enough to pivot. Most times, riders can control that and carry themselves into and out of the turn. When things go badly, though, that front tire will either slide and cause a low side crash, or slide and catch far too much traction. That slide/catch was the root of all of those crashes.

As those riders put more and more pressure on the front end, it caused the front end to slide across those bumps and then with a violent reversal of momentum, grab traction and high side the riders into the berm. Most of the time, a high-side crash is typically experienced with the rear tire when accelerating. The rear tire spins up as it loses traction, then catches traction quickly and flings both bike and machine violently in the other direction. The momentum that the engine and rear tire built during that spin has to be released and when it does, bad things happen. This is more common in road racing, but most have experienced it on hard packed motocross tracks,.

This is the exact same dynamic, only with the front tire. Riders get that same slide (the same physics as the rear tire spinning) but as the equipment catches back up, if too much brake is applied, all of that forward momentum has to go somewhere. That momentum explodes the rider upright (high side), and into the berm. I watched it time after time, all day and night. On the TV broadcast, they showed Alex Martin in slow motion as well. There is a very pronounced slide, slide, and uh oh…. High side we go. Blake Baggett lost his chance at a podium with the exact same issue.

Now, how do you avoid that? Well, that’s a difficult question to answer because riders much better than me were experiencing it. The simple answer is to slow down, right?  But this is racing, so that’s not an option.

One of the techniques I saw was to find a smoother landing spot/entry into the turn. That smoother landing kept the front tire planted and provided a more predictable braking pad. That’s easier said than done when quadrupling into a berm off of a rutted, two foot take off ramp.

Another factor was body positioning and finding a sweet spot for how much body English to apply to the front end. Staying over the front end helps add traction but too much and you lose any ability to save a near crash. The most effective method seemed to be awareness of the issue. Even without crashing, several riders had near misses in this same spot. Davi Millsaps came very close to crashing in this same way just before Baggett went down but was able to save it. Exercising a tiny bit of caution may have been necessary in this particular spot but as most could probably understand, riders battling for a podium aren’t prone to making caution a priority.

Crashes happen. That’s just a part of this sport at every level. How and why they happen is interesting to analyze, though. These crashes happen in the blink of an eye with physics pushing and pulling so many different ways on both the rider and the motorcycle. It’s actually incredible that riders don’t crash more when you really stop and think about what the top-level riders are doing lap after lap. Scrubbing jumps and blitzing across the top of waist high whoops and seat bouncing through rhythm sections are all things that just don’t make logical sense. For the world’s best SX racers, however, defying logic is just another day at the office.