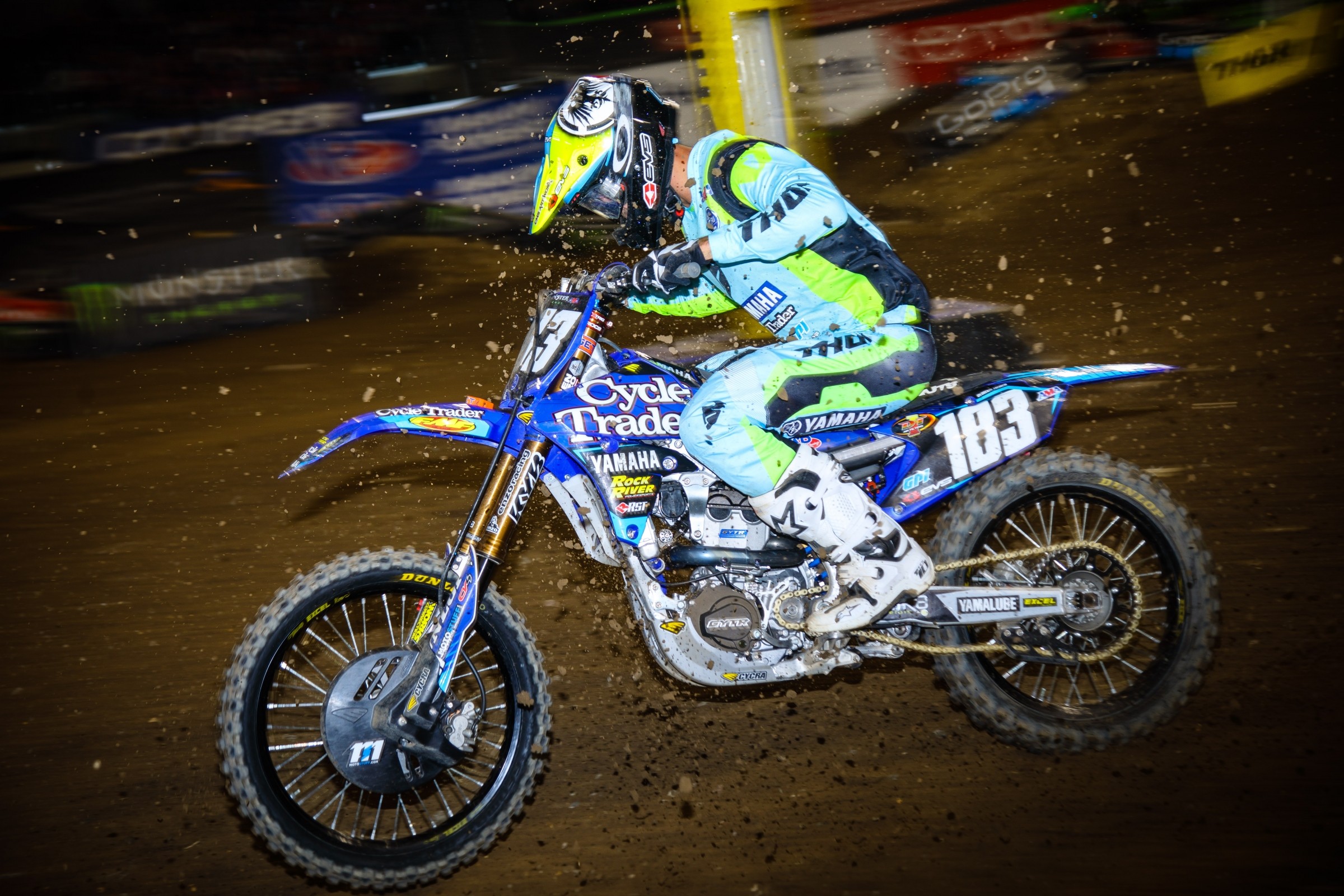 When Lorenzo Locurcio was growing up riding local tracks in Venezuela with his dad, he never thought he would be riding supercross in America. But here he is, with a factory supported ride on the CycleTrader.com/Rock River Yamaha team. From racing locally around Latin America, to making a few trips to the U.S. a year, and finally moving here full time, Lorenzo’s path through the amateur ranks and into the pros has definitely been different than the average pro.

We caught up with Lorenzo to see how he got hooked on motocross while living in Venezuela, what it was like when he finally made the move to America full time, and how he thinks his rookie supercross season is going so far.

Racer X: Growing up in Venezuela, how did you get interested in moto?
Lorenzo Locurcio: My dad [also named Lorenzo] used to ride when I was younger. He used to do it as a weekend hobby and whenever I was born he bought me a PW50 and it was all history from there.

So you have been into from basically the beginning then.
Yeah, I’ve been riding since I was four years old.

And what’s the motocross community down there like?
It used to be big. It used to be good, like good riders and all that. As the years went and the economy kind of went down riders stopped racing and then some people went to school. The people right now riding there … they’re still good but it’s not enough people. They do a championship there and it’s only maybe like 60 riders total in all classes. So it kind of went downhill. Their government has a lot of problems with the dirt bikes and stuff. But they’re still riding down there I guess. [Laughs]

When did you move to the United States? I know your first year at Loretta’s was 2008, did you come here before that?
Oh, no. I actually moved in here full time in 2011. September 2011. I used to just come and go for Loretta Lynn’s. That was my first year [2008] I qualified for it and that was the first year I tried to. I would come do the qualifiers and then go back home, train there, and then we would come here like a week before and travel and race and then go back home.

And when you moved here, did you move straight into MTF [Millsaps Training Facility]?
Yes, I moved in straight here.

And was that pretty much the reason you decided to make the move here full time?
Well, from ’08 a friend of ours was like, “Hey, I’m gonna take my kid to race in America. Are you interesting in coming? The motocross there …” he told us motocross here is like, awesome and all this. So my dad decided just to bring me and try it out and see something different. I’d been to Latin American before that time, but never outside Latin America. I would just come here to Disney and stuff. But we decided to give it a try. We did the Winter Am series and from then they mentioned Loretta Lynn’s so we’re like, “Alright, let’s try to do that.” And then we started doing nationals and stuff.

When you moved to MTF, did you come here alone or did your dad come with you?
Well, we were coming before that for camps and stuff, but it was always my mom and sister. We would come for like weeks at a time. Whenever we moved in here full time, my mom and sister moved in with me.

Was there a little bit of culture shock when you moved here full time? Or had you already been adjusted to it because of your visits?
Yeah, we spent months at a time here too so we kind of got used to it. We knew what to expect. But, it was definitely hard leaving the family and everything behind just to live in a trailer. [Laughs]

Happy birthday to the women that brought me to life ! I could write so many wonderful things about this human but I rather tell her In person! Thank you for all you do for me and my sister you the best !@ingridlocte83

Are they still with you now or has everyone moved back home?
They come and go now. But my mom has actually been with me since January and my dad got here a week before Minneapolis. Then my sister is actually getting here today, so she’ll be here for Daytona.

When you were a kid, did you always look at American motocross and supercross as the goal or did you more look up to the local guys around you?
As I was growing up we would follow supercross, but it was kind of like, you know … I never thought that I would have the opportunity or chance to ride supercross or ride in America. I wasn’t really … I mean, I would follow it. I watched every race, I knew everyone from back in the day until now. I’ve been a big fan for a long time, but never thought that one day I’m gonna race there, I never thought it was possible. I did follow some people from here [America] and then I did follow some people from home too. But then as I was growing up and I started riding here in America and stuff, I started following it more and more and more.

Fast forward a little bit. Looking at your Loretta’s results, it looks like your first break out ride was in 2013. When did it first click for you that you were probably going to be able to race as a professional.
I’d say that year in 2013. After 2012 I kind of got upset with myself and I was like, “Man, I really want to do this for good and I want to make it as a career.” That’s whenever it kind of hit me and then I started training harder and harder. I just put everything into it everyday, so it started paying off there. In 2014, I had a really great year in Loretta’s and from then on it’s been like, “Okay, I’m gonna do this and I’m gonna do it right,” so I put everything into it.

So how do you think your rookie season is going?
It’s been going good. I’ve made every main, I progress every round, but I’ve crashed every main. I really haven’t had the results I want to, but we progress. We made progress with the bike, I made progress with myself in confidence and all that. I was able to show speed this weekend in my heat, last weekend in Atlanta in my heat too. But I’ve just had bad luck in my mains. So it’s been good, I’ve qualified straight out the heat all of the three rounds so far, so that’s been good there. I really want to put the main together without crashes and see where it leads me to.

Now that you’ve had some time on supercross tracks, which do you prefer, supercross or motocross?
Oh, man. I haven’t really done an outdoor national here in America yet, so I don’t know yet. But from amateurs to supecross, hands down supercross. It’s way better. I’m just really blown away with how cool it is to race in a stadium with all the fans and stuff. I think it’s really cool.

What surprised you the most about racing supercross so far?
I’d say the intensity. How fast everyone is and how close everyone is. In amateurs there’s usually two or three guys that you got to be worried about, and here it’s the 22 riders that’s on the gate that you gotta be worried about. It’s definitely crazy how fast the guys are and it’s definitely crazier how much you gotta work to be in the speed and that environment.

Since you’ve done the Daytona Amateur Supercross a couple times, do you think you’ll be more comfortable in Daytona this weekend?
Yes, and no. I mean I’ve rode the dirt, I already know what it is, but the layouts are so different. I guess it will help me because I’ve kind of been already in the situation, I’ve been there already in the speedway, I’ve been through the same gates and stuff, but it will be different for sure.

And what do you like to do during your free time when you’re not riding?
In my free time I usually just hang out. I used to do all my bike work until this year and I finally got a mechanic. So now I’ve got too much time to spare [laughs]. I either hang out with them or I just pretty much go out and hang out with people here from MTF. Mostly I like to rest a lot. So if I’m not in the gym or I’m not riding or I’m not doing something dirt bike related I’m either watching TV … I do a lot of videos; YouTube is probably my number one page to go. Just races and videos and all of that.

What’s your favorite YouTube channel?
Racer X! I like watching the bike build stuff, especially the two-stroke ones.