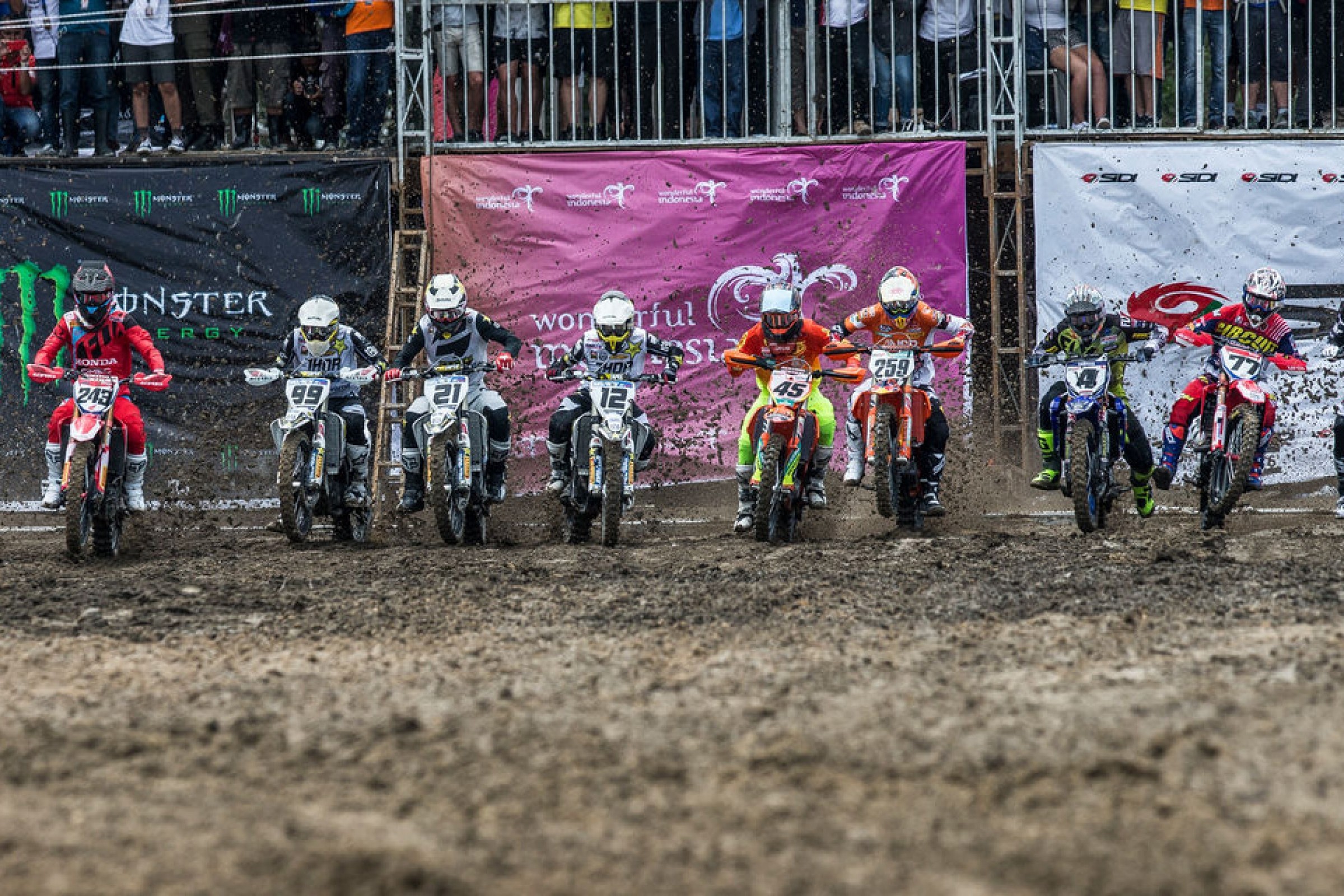 From time to time motocross throws up one of those races where the scope of the drama feels too vast. So, here are the immediate facts from the latest installment of MXGP: the series returned to Indonesia and one of the biggest bike-crazed nations in the world for the first time in 20 years at a new track on the island of Pangkal Pinang. Round two of 19 took place in high temperatures and humidity … and also with showers battering the course to the extent that a single session served as timed practice for both MXGP and MX2 on Saturday. In addition, the second MX2 moto was cut short by seven minutes on Sunday and the second MXGP race was cancelled altogether.

Seven days earlier, when MXGP assembled in Losail, Qatar, for a strangely damp start to the season in the desert, there were already reports that the first Indonesian Grand Prix since 1997 (Yves Demaria—now mentor to Julien Lieber—was the winner that day) being under threat from bad weather. The teams jetted from the Middle East to Asia and endured a week of intermittent tropical downpours: you can imagine the effect on the compact facility at Pangkal Pinang. Practice was barely manageable on Saturday (causing a lot of anxiety and discussion amongst the riders) and although the rain mercifully stopped, only a handful of laps were necessary to carve the terrain into a nightmare of ruts, sticky clay holes, and unpredictable patches of grip on Sunday.

The heavens again opened after the first motos and during the second WMX race. MX2 was a lottery of incident and accident. The layout had already been cut to remove the boggiest section and a quagmire that claimed the likes of Romain Febvre, Jeffrey Herlings, and Tim Gajser in MXGP only an hour before. Access to parts of the track was becoming difficult and some riders seemed to be loosely interpreting the boundaries of the racing course.

“The rain shower turned the MX2 race into a total disaster and people were cutting the track and safety was being thrown up in the air,” said Simpson. “The right decision was made at the end to cancel our second race because it was an absolute mess and it felt surreal to be up there on the podium without a second moto, but a win is a win.”

On this busy stage—and Pangkal Pinang was undoubtedly the best attended of the recent adventures to Asia and four previous attempts in Thailand—it was hard to keep up with the progress and pitfalls. Simpson bizarrely confessed to enjoying the track on Saturday and launched off from Pole Position. In Qatar, the Scot could only manage a 16th after suffering from a virus, and crashes cast him deep into the MXGP leaderboard. On this slower, more technical and distinctly British surface the 28-year-old was at home. Red Bull KTM’s Glenn Coldenhoff set the pace as Simpson used a shrewd approach to pass the likes of Gajser, Febvre, and Antonio Cairoli to harass the Dutchman and take control.

The Indonesian soil was starting to become perilous for those who picked the wrong line. “It was rutty, deep and with a lot of choice, you had to have your thinking cap on and see where you could make up time and carry speed through the ruts,” he said.

Febvre was caught out from a top-five finish and Herlings—still dealing with a broken right hand—was also stuck and needed several people to retrieve his KTM. Max Nagl’s Rockstar Energy IceOne Husqvarna seemed to merge with the ooze and his FC450 was wedged fast. Simpson himself was almost swallowed in the same zone on the very last lap. “It was a bit heart-stopping as the bike got caught in that section,” he said. “Every time I was coming through, keeping my speed up, believing in my technique, and just going for it. I kept my feet up and kept it pinned. Some laps it was easy, other laps you just had to wade through. In the end I was so motivated not to lose the race that I got the bike out of there.”

The adventurous Coldenhoff held on for second (his second podium with the works 450 SX-F) and the cautious Monster Energy Kawasaki’s Clement Desalle was third; the Belgian earning his second podium finish in a week and moving up to second in the MXGP standings. His old Sicilian foe, Qatar winner Antonio Cairoli, played it smart to finish fourth. Full props to Rui Gonçalves for his best premier class result since 2013 in fifth place on the 8Biano Husqvarna and the significance of four superlative sand riders in the top five won’t be lost on any observers.

MX2 arguably had it tougher by opening the race programme and discovering the softer and more treacherous segments of the track. Jeremy Seewer profited from Qatar winner Pauls Jonass’ failure to get through the same problematic swamp after leading most of the first race (the Latvian then had a poor start, crashed, and had a bike problem to finish outside of the points in the aborted second race) to clinch his first moto victory. The Swiss only had to find his way through the lappers, fallers, and desolate remains of half-submerged motorcycles to become the second first-time winner in a week.

Perhaps the big news aside from the misfortune to befall the pacesetters from last week (Benoit Paturel taking seventh and frying a clutch in the second moto) was the miraculous and attacking display by Samuele Bernardini to take the factory minnow TM to a very first MX2 win. How the Italian stayed on the fast blue 250 at times defied belief. He was over a minute ahead until red flags called an end to the race while Seewer judged the race admirably. “Once your wheel stops it is over,” the Swiss said. “They put out the red flag and I think that was the right decision; the track wasn't rideable anymore.”

Julien Lieber went 3-4 and from the 36th gate pick after a sluggish day on Saturday. The Belgian now carries the red plate on his privateer KTM and could not have come out of the injury-wilderness with much more conviction.

In the first of six rounds in the FIM Women’s World Championship Courtney Duncan was awarded the overall as the FIM jury had spotted outside assistance given to Nancy Van Der Ven, who had won the first moto, but had crashed repeatedly in the second as the rain crashed on Pangkal Pinang once more. Livia Lancelot was again the definition of unlucky as her races were ended by a technical problem and a multi-rider jam in the middle of the track while Kiara Fontanesi’s Yamaha was planted firmly into the goo on Saturday. Indonesia couldn't have been a tougher initial outing for the girls, but Duncan will be happy with her precious points over Van Der Ven, Fontanesi, and Lancelot in what is expected to be another close chase for the title.

MXGP now finishes two weeks on the road, so the teams and riders will have a week in Europe to prepare for a western trajectory. Round three will take place in front of another enthusiastic crowd and on one of the best tracks of the season at Bariloche, Neuquen, for the third Grand Prix of Argentina this decade.