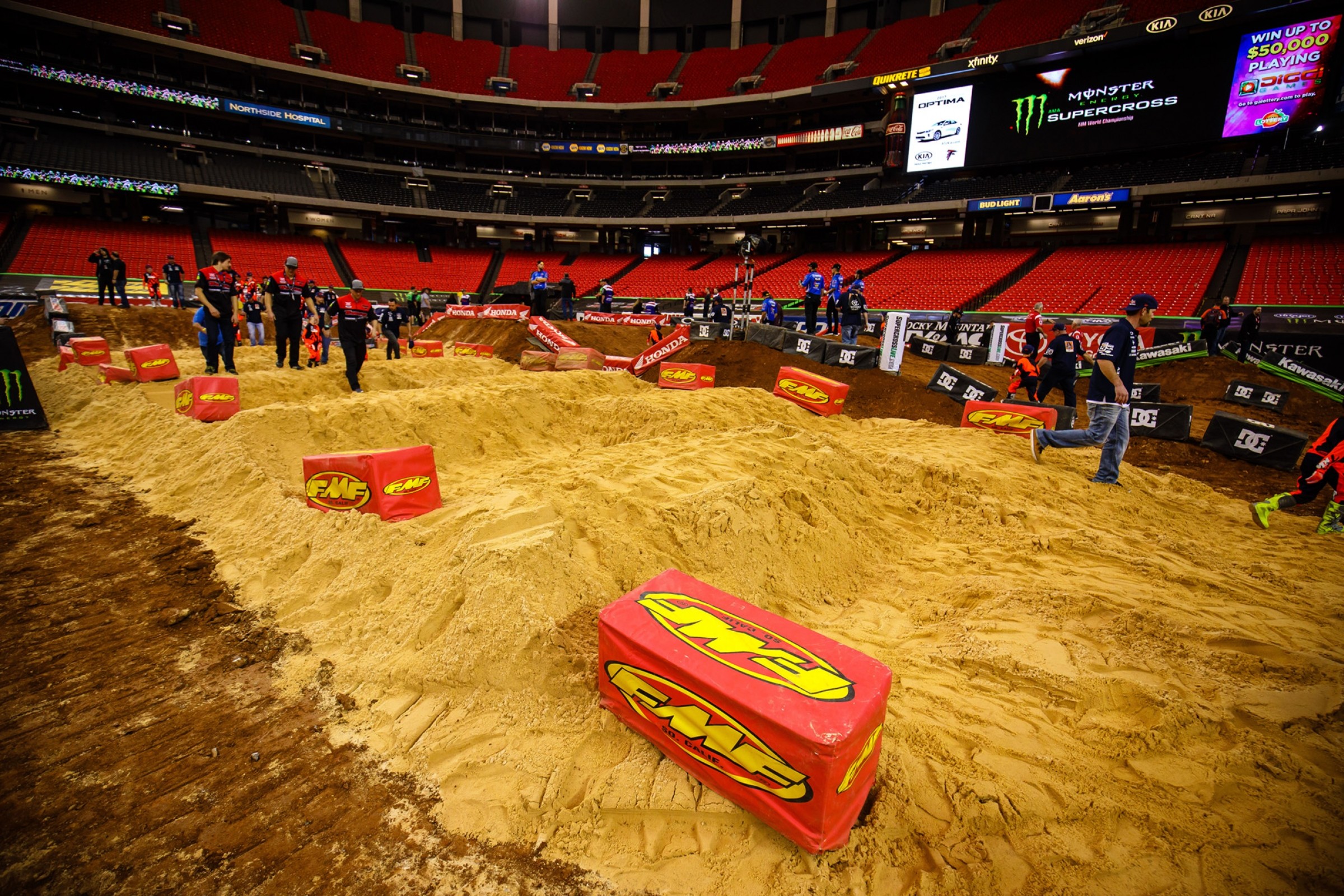 3 on 3 Questions After Atlanta

1. The Ryan Dungey watch continues. He won, but Eli Tomac closed in from way back. Is Tomac just on fire? Is Dungey still slightly off compared to previous years? Or is there no problem at all?

Jason Thomas: I will say yes to both of those. This is the best supercross version of Eli Tomac that we’ve ever seen. He is the fastest guy in the series. The fastest guy doesn't always win, though. Just ask James Stewart about that. As for Ryan Dungey, he may not be as polished as the 2016 edition, but he is certainly good enough to put 25 points into his nearest rival. I don't think he is quite as good as his peak level but he is so smart and so equipped to maximize his opportunities, he just doesn't give the other guys any room to breathe. He gave up nine points to Marvin Musquin at Arlington and Minneapolis and then with one bad start, Marvin hands back those nine points in Atlanta. So, three races are checked off with Marvin and Eli both turning in great performances, and the status quo remains. There can be no missteps in a battle plan against Dungey.

David Pingree: I don't think Ryan is as sharp as he was last season early on. I also know that he and Aldon Baker are very good at managing a series and they will make the adjustments necessary to keep the points lead. Check the point standings if you still aren't sure about that. However, Eli has found a level in his supercross riding that he’s never had before, at least not with any consistency. The contender that Kawasaki thought they hired last year has finally arrived. Until last month Eli had never shown that he was capable of winning a 450 supercross title. Now, I would say it’s just a matter of time.

Steve Matthes: I will say that at least Weege rebounded with his questions this week—somewhat. Dungey won the race fair and square and extended his points lead. That's the bottom line. But, he only had the fourth fastest lap of the main event, Blake Baggett was catching him for a few laps, and then Eli Tomac caught him from way back. But I'm sure RD was marking Eli and had it under control. Yeah, but still, you know? More than ever with this new timed format the starts are SO important and Dungey nailed it. The riders are more concerned with staying upright and out of the way of lappers than worrying about going forward. Dungey and Baggett got starts and did well, but Tomac was the fastest rider in the main event. Does that make sense?

Thomas: There has always been much debate about Aldon Baker and his program. I have heard both sides and argued both sides dozens, if not hundreds, of times. When word got out about Zach heading down to the Baker’s Factory, many wondered if Aldon would in fact work wonders or if it would make little impact in the same way it did for Tyla Rattray or Jake Weimer. Of the short sample size we have, the results seem to be overwhelmingly positive. He was easily the fastest rider in Minneapolis, even with a third place finish. Then he backs that up in Atlanta with a dominating win. He's leaner, faster, and appears more mentally prepared than ever before. Advantage: Baker.

Ping: He's always been fast enough. For Zach the improvement is mental. Aldon has him believing he can win and it showed on Saturday. This weekend should carve out the title contenders for this series, but Zach and Joey Savatgy are two of the players.

Matthes: We wrote and talked all last week after his third how he's the guy. So there's a bit of vindication for all of us that Zacho passed two guys and took off for the win. He's in tip-top shape, he rides and trains with three of the best 450SX riders in the world every day, and his bike/team are top notch. He's got everything you need to finally get over the hump and I admire him taking this huge financial plunge to go with Baker, move his family to Florida and chase after a goal. That's something that his 250 teammate, among others, should have looked into over the years. How bad do you want it? Osborne got tired of not having all the pieces of the puzzle in his program and so far, it's paying off.

3. Blake Baggett gets Rocky Mountain ATV/MC-WPS-KTM on the 450SX podium for the first time. Can he get the team a win? Maybe at Daytona? Outdoors?

Thomas: First, that was a huge step for that team. Forrest Butler [team owner] has spent far too many sleepless nights wondering if this would ever happen for him. Now that the pressure from that has been lifted, a win is the next goal. With the way this season has gone, I do think it's possible. Blake kept Dungey in his range for a while last weekend before Eli was able to take over second place. Even then, the gap from first to third was not big by any means.

As for where he could win, of course Daytona jumps off the page as an opportunity. The other side of that is Eli Tomac and how great he is at Daytona, too. Ryan Dungey and his three 450 outdoor championships may also have something to say about that, but I feel Eli will be the odds on favorite to win Daytona. If Blake could get the holeshot and find the right situation, though, it's definitely possible. As for outdoors, I think that's going to be a possibility every time the gate drops. He was an outdoor national champion in his own right, so this is not a new scenario for him. Staying healthy and coming into the series with full momentum will be the key for success this summer.

Ping: Blake is definitely capable. He's riding better in supercross than he ever has, including when he was on a 250. Still, he is better outdoors and I would say he has a better chance of winning a National this summer.

Matthes: Great work for Blake, Forrest and the guys to finally get on the box (although I give Butler crap about his team sweeping the podium in Toronto at one of those World Supercross rounds and him not acknowledging it) and Baggett's been fast all year. So it's finally paying off. Winning Daytona, though? Whoa, whoa ... slow your roll Weege. He's certainly fast there but so is Eli Tomac. In fact, Tomac has been on fire the last month AND Daytona is right around the corner. I'll go with the #3 being the heavy favorite down at the speedway (Gord!) unless the track is garbage again and the start is all that matters. Then I'll go with Dungey.