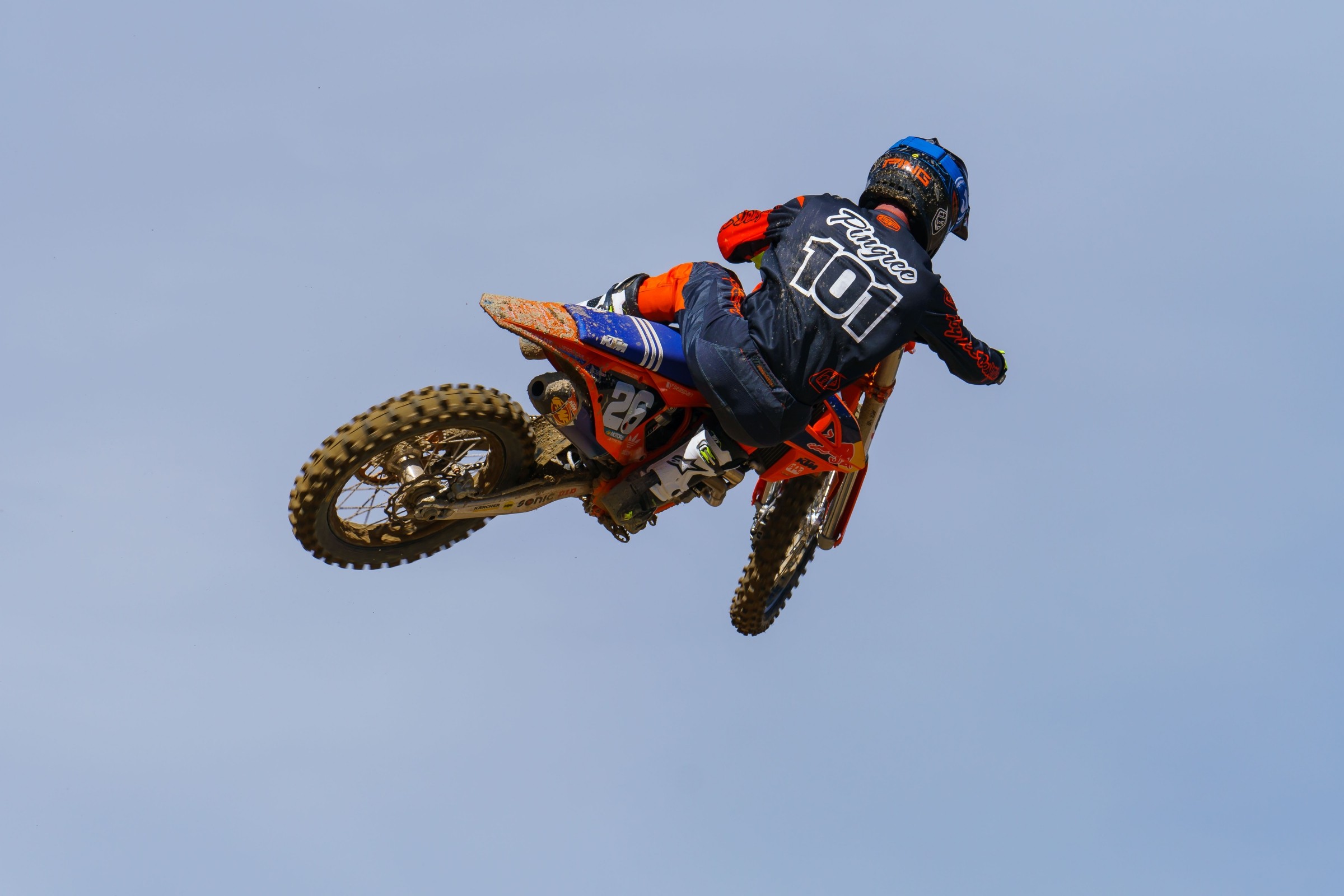 My dad says I can get a puppy if I can get a question in your Friday Ask Ping. My question is: I see old pictures of riders wearing baggy clothes like pants and that go over the boots ... Why doesn't anyone do that anymore?  Did you ever do that?  What should I name the puppy?

My name is Gus

Name your new puppy Booger—your mom will love it. Yes, Gus, there was a very strange time back in the 1990s when companies called LBZ, Flesh Gear, and Stiffie tried to turn the racing industry into one big pimp-and-hoe party. Crushed velvet suits, huge shirt collars, and Goldschlager shots were all the rage and for a brief moment it looked like their over-the-boot pants might actually catch on as a legit trend. And then the SMP Freestyle Team had a really dismal showing at the L.A. supercross that included sparklers and riders not being able to clear the triples, let alone perform any kind of tricks. Larry Linkogle embraced the style, which turned most folks with any self-respect away from it. And as quickly as they showed up, baggy motocross pants with a belt became part of motocross lore. Not the good kind either, like epic races and works bikes.

This is more along the lines of racers piercing their nipples, growing goatees, and getting tattoos of themselves, all things that happened in that era as well. And, no, I never joined the baggy pant circus. For the record, there are still adventure pants and snowbike/snowmobile pants that run the over-the-boot design, but they have a functional purpose. Enjoy your new dog, little man.

It would be awesome if after the main event, fans had like an hour to go down and actually check out the track. It would be awesome to see up close how deep the ruts are, whoops, steepness of the jumps, lines, etc. I doubt it would be a mad rush, but it would be awesome. Also, anymore with the coverage so good, lame point battles, stars getting injured, I’d rather just watch the supercrosses on my flat screen. I'd be more motivated to drop the 400 bucks (beer, hotel, tickets, etc.) if I could walk the track. Also, maybe I'm weird, but I love to walk tracks before and after riding them if I get a chance. I like to see my lines and how the ruts developed. Anyway, what do you think Sir Pingaling?

I couldn’t agree more. True fans would love to see how chewed up the track gets and to be able to stand on the battlefield that their heroes were just racing on. The casual fan, if they took the time to go down, would be blown away at how big the jumps are and how deep the whoops are when you are standing on them; the perspective from the stands is deceiving. The problem is that some little snowflake would trip and roll their ankle on the track. They would sue Feld, Dirt Wurx, and likely the stadium for allowing such dangerous activities to exist. I love this country, but our legal system is really broken when it comes to frivolous lawsuits. This is one thing that makes the Nationals cool is you can stand five feet from where the riders are coming through and get a front-row seat to the racing, and sometimes get roosted in the process. I wouldn’t hold your breath waiting for a chance to walk a supercross track.

How are you? I’ll get right to it ... Girls with flamethrowers are quite possibly the dumbest and scariest thing I have seen in a while. With all that hair spray what happens if one breaks a heel, falls and lights one of the other girls up? Talk about a hot chick. Or one of the girls catches another talking to her boyfriend: Fooove there goes 2 people up in smoke. This is Ask Ping so my question is, who thinks up this dumb crap and why do we need girls with flamethrowers? Do promoters really think SX fans are Neanderthals and degenerates? We shouldn't have to be subjected to this idiotic and pathetic forum of entertainment. Put the flamethrowers down and walk away. And fire that idiot.

The sad part is the flamethrower isn’t the lamest thing they try to pass off as entertainment. In what world is watching a couple of moderately overweight middle-agers pulling on pants and jerseys from the JGR riders interesting to watch? Or what about the gimmick where they have two guys running Tuff Blocks from the start straight to the back of a Toyota Tundra? I know we have to take care of our sponsors, but I can’t believe this is the best stuff they could come up with. When wiener dog racing is one of the better halftime shows you know the bar is set pretty low. Monster girl mud wrestling? Barrel racing featuring retired pros versus horses? Bobbing for apples? Things can’t possibly get worse when it comes to killing time between heats.