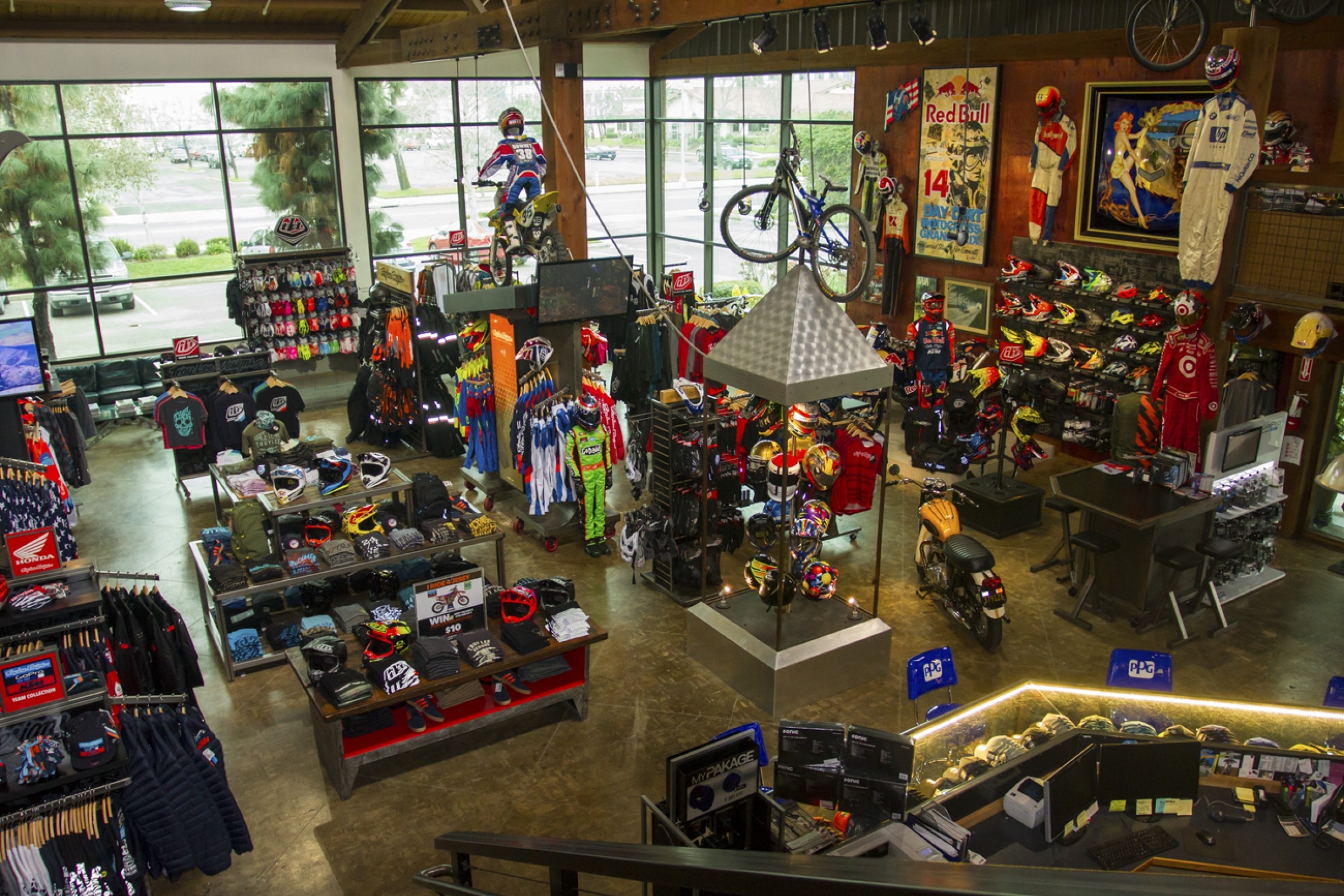 A few weeks ago I toured the Troy Lee Designs headquarters in Corona, California. Dave Casella, TLD’s global marketing manager, led the tour and took us through their store/museum, Troy’s office, the paint department, Troy’s paint booth, and to Troy’s son Max’s race shop, where he and his buddies were hanging out getting ready for his Loretta Lynn’s qualifier. If you didn’t catch the Facebook Live video (which actually worked from beginning to end this time!), you can check the video out below.

This is an amazing operation and building, and further, it's not even the whole scene, because the actual TLD/Red Bull KTM race team now works out of a separate shop next to the regular KTM race shop. Overall, a big operation, which is pretty amazing considering it started with such humble roots.

Troy got his first job painting at just 12 years old. For $15, Troy was tasked with painting a Christmas scene on a NAPA Auto Parts store in Nevada City, CA.

“We painted anything that wasn't nailed down. Lunch pails, mailboxes, and turtles,” said Troy. “We'd mask off the shells and paint numbers on them.”

Troy rose to prominence as the helmet painter to the stars. Once a one-man show painting helmets for motocross athletes such as Jeff Ward, Danny “Magoo” Chandler, David Bailey, and Jeremy McGrath, Troy has ventured into other sports and painted just about every type of helmet—including college football, IndyCar, and more. Troy has taken his artistry from painting helmets and applied that style to what is now a global brand.

From helmet painting, to sportswear, to motocross, mountain bike, and adventure gear, to professional and amateur motocross teams, Troy Lee Designs is quite the operation. In fact, an investment group recently bought into the company to help the brand take its next steps. Troy will still be the majority stakeholder in the company, but with these new partners, expect to see even bigger things from TLD in the future.

Not only is the company itself growing, but so is their professional racing team. Troy started a supermoto team back in 2003, which our own David Pingree raced for. (Ping also managed the TLD supercross and motocross team, which was formed in 2008, from 2009-2010.) In 2015, TLD took over as the factory 250 team for KTM. That same year, the team would race both the West and East Region in Monster Energy Supercross for the first time. This year, their second as the official KTM 250 factory outfit, Shane McElrath won his first supercross at the season opener in Anaheim this year and carried the red plate as the series points leader until round five in Oakland. At the East Region opener last weekend in Minneapolis, Jordon Smith finished a career-high second. The team has certainly become a force in the 250 Class with a bright future on the horizon.

If you ever find yourself in Corona I suggest checking out the TLD headquarters. Although you may not get the tour we did, their lobby is also a store/museum that is open to the public. From a collection of Jeremy McGrath helmets from his heyday, to historical motorcycles such as the one Travis Pastrana jumped into the San Francisco Bay at the X Games in 1999, to a funny car hanging on the wall, to custom painted guitars, to Notre Dame football helmets, this is a place that should definitely be on your bucket list of places to visit.