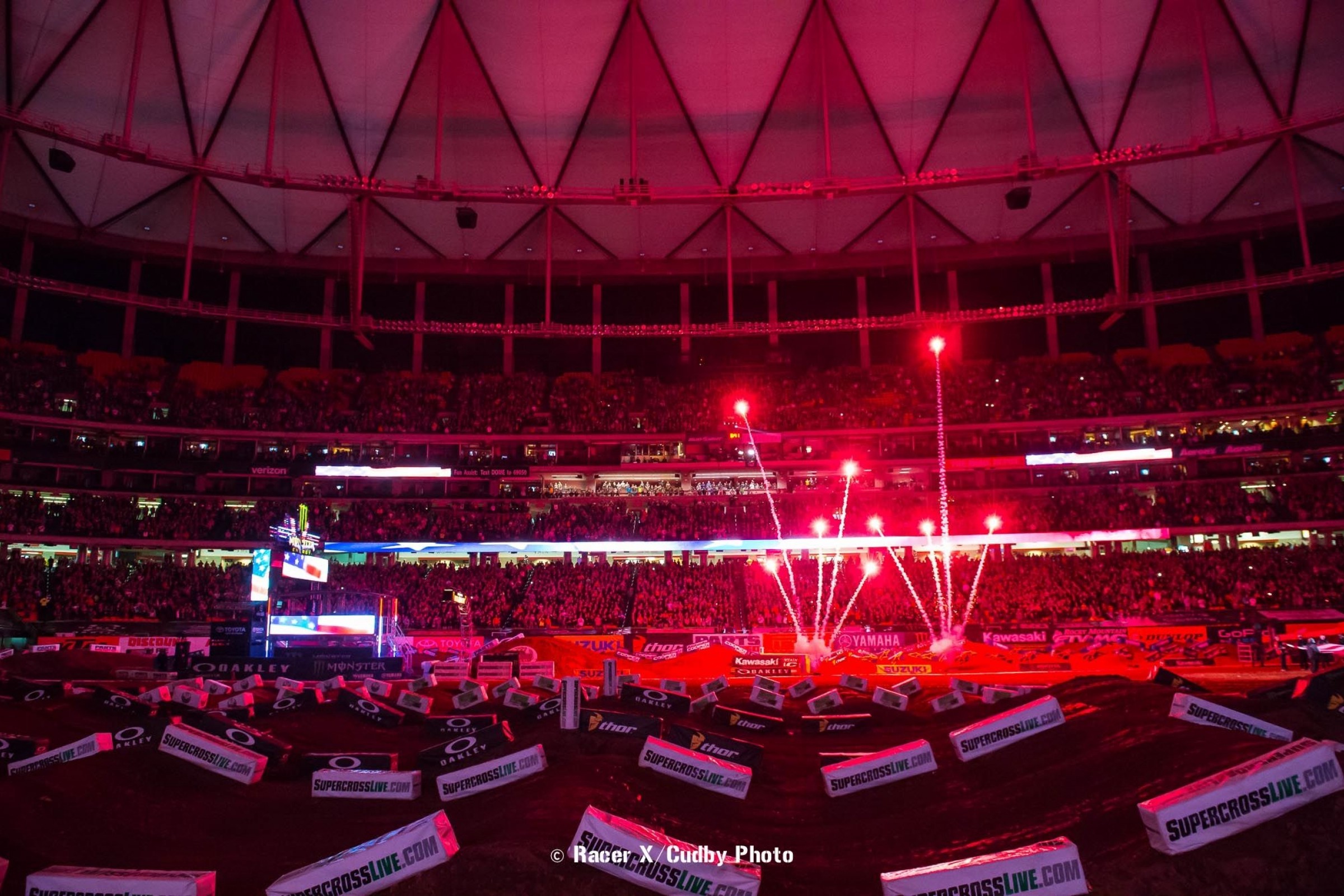 By Aaron hansel and Chase Stallo

Last week Christian Craig looked great on his way to third overall in qualifying and absolutely crushed everyone in his heat race, indicating he’d be a force in the main. He must have somehow angered Mike LaRocco though because GEICO Honda obviously locked Craig in the bathroom and sent someone else to the gate wearing his gear. Whoever it was got a horrible start in the main, crashed early, continued to struggle, and got lapped on his way to 12th place. Hopefully the team lets the real Christian Craig race in Atlanta. –Aaron Hansel

Kicking the season off with a podium finish ain’t a bad way to do it, but at least a small part of Zach Osborne had to be a little bummed with third place in Minneapolis. The Rockstar Energy/Husqvarna Factory Racing rider was fastest in qualifying, and despite not getting a great start, set the fastest lap of the main and found himself reeling in race leader Joey Savatgy with plenty of time left to make something happen. Instead he hit neutral and crashed in the corner after the sand section all by himself. We’ll never know what would have happened had he actually run Savatgy down, but if Osborne keeps it on two wheels in Atlanta we’ll hopefully get to see the duo battle in the Georgia Dome. –Hansel

The list of European riders who have struggled in supercross is much longer than those who have excelled, so we weren’t quite sure what to expect from Dylan Ferrandis’ Monster Energy Supercross debut in Minneapolis. Well, if the Frenchman’s first race is any indication, he’s going to do just fine. The Yamalube/Star Racing Yamaha rider was second fastest in the first qualifier, ended up eighth fastest overall, and earned sixth in the main despite a dreadful start. Hopefully he gets a good start in Atlanta so we can get an idea of his true potential. -Hansel

If you’re Alex Martin, you’re wishing the AMA had a throwaway rule—the Troy Lee Designs/Red Bull KTM rider experienced the definition of a disastrous night in Minneapolis. After going to the LCQ, Martin didn’t even complete a single lap before crashing out of the 250SX main event. We know he’s much better than that, he’s been podium material before, but we’ll have to wait until Atlanta to get an idea of where he fits into the overall picture in the East. –Hansel

If you like watching riders on the rise then you’re going to love what Adam Enticknap has done so far. Last season the 450SX privateer only made it into a single main event. But this year, with less than half the season down, he has already made it into three mains. He even transferred to the main in Minneapolis without even having to go to the LCQ. That’s amazing progress! If you like cool stories about nice guys, this is one to keep an eye on. –Hansel

Head of the Class

Aside from a crash in Arlington, which was reportedly caused by damage to his front brake, Monster Energy Kawasaki’s Eli Tomac has been the strongest rider in the class over the last four rounds. Since Glendale, Tomac has led 50 laps (most in 450SX) and won three of the last four races. His average lap time a week ago would’ve ranked as the fifth fastest lap in the class (!), ahead of Cole Seely, Trey Canard, Davi Millsaps, and more. While he’s certainly made it look easy at times, Tomac admitted there’s no relaxing when battling the likes of Ryan Dungey and Marvin Musquin. ”I can’t back off when I have these two guys sitting next to me,” he said post-race. “This was by far I think on par with Oakland for being one of the tougher tracks of the year, because of the shorter lap times.” Tomac still trails Dungey by 24 points heading into the weekend. We’ll see if he can cut into the lead with another win. –Chase Stallo

The Georgia Dome has been hosting AMA Supercross races since 1993, when Damon Bradshaw, from nearby North Carolina, beat Jeff Stanton and Mike Kiedrowski in what was then the 250 class at the inaugural event. This will mark the final race in the Dome before heading next door to a new stadium for 2018. Since that night, Atlanta—easily the most attended round—has always had a special feel—from Chad Reed vs. James Stewart, to Ricky Carmichael’s epic rides—and a flare for the dramatic (not to mention all the classics from the old Atlanta Fulton County Stadium). The most dramatic race of them all though may have taken place last year, as Red Bull KTM’s Marvin Musquin led until just a few turns, when he was trying to pass James Stewart who was a lap down and made a mistake, which allowed teammate Ryan Dungey to take the win. Musquin finally got his first career 450SX win in Arlington two weeks ago, and is certainly a favorite again this Saturday as the track fits his style. Can Musquin get redemption at the last race inside the Georgia Dome? –Stallo

This past week was supposed to serve as a productive one, as Jake Weimer was expected to spend the week testing at the AutoTrader.com/Monster Energy/JGR Suzuki facilities in North Carolina. Instead, Weimer tweaked his lower back in Minneapolis and wasn’t able to ride. The team said he’s been undergoing treatment at the JGR NASCAR physical therapy program and has looked better as the week progressed. We’ll see how Weimer’s back holds up in Atlanta. -Stallo

If you haven’t been dialed into the last two rounds, you may not have noticed that Red Bull KTM’s Trey Canard had returned from a shoulder injury that sidelined him since Anaheim 1. It’s not a slight against Canard, who’s had solid 11-8 finishes in his return. It’s just the way things work in this sport when someone isn’t battling up front. Also, maybe it’s a good thing Canard can ease back into things without the pressure of being a front-runner. We’ll see if Canard can start making his way toward the top-five on Saturday. –Stallo

Dating back to last year’s 250SX West Region, Monster Energy/Pro Circuit Kawasaki’s Joey Savatgy has won three of his last five races. Despite his win at the opener last weekend, Savatgy said he didn’t feel great. “I didn’t really feel awesome all day. I struggled with bike setup,” he said post-race. “Even in the main event I kind of struggled with getting something together.” Maybe Savatgy has a point, as he wasn’t able to pull away from Jordon Smith and Zach Osborne, and won by only 1.4 seconds. With the first round nerves gone, most riders will be more comfortable—including Savatgy. We’ll see if it translates into another win. –Stallo