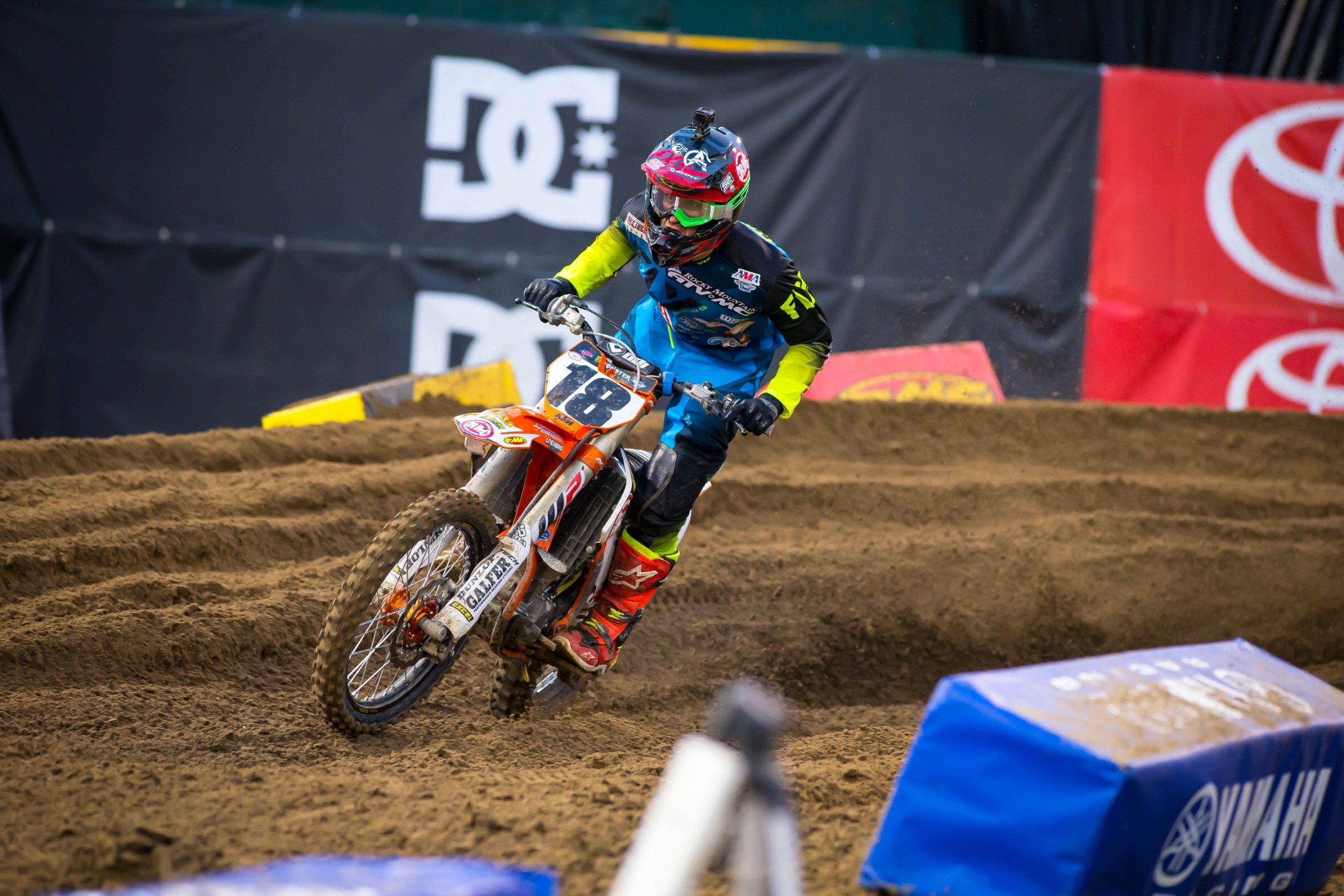 Redux News and Notes From Oakland

“It wasn't in the cards for me tonight,” said Honda HRC’s Cole Seely, who battled with Jason Anderson (for what seems like the 900th time) for fourth but ended up fifth. “The soil is super tricky here: sometimes I've ridden here and it's gone well and sometimes not. The line changed throughout the day and between the heat rounds and the main event I thought I had my lines picked out. But it changed and that changed my night. Mentally I feel like I'm stronger than I've ever been. The bottom line is that I want to win and we’ll see what happens in Dallas.

“Cole improved throughout the day, but line choices in the two big rhythm sections were where he was inconsistent and probably cost him his podium spot,” added Seely’s mechanic, Rich Simmons. “Overall, there were some positives. He’s shown that he has the speed to run up front and if he is more consistent in decision-making and confident in himself he’ll get there. Heading into the main event we were all confident and he was confident. He got a great start but he didn’t pull the trigger on those rhythm lanes that gave him the speed he needed.”

Davi Millsaps is quietly putting together a solid season on his Rocky Mountain ATV/MC KTM, notching a come-from-behind effort to grab sixth, putting him fifth in the points. Millsaps’ night started rough with a hard crash in his heat race, but he got a good start in the main and battled with fellow KTM riders Marvin Musquin and Blake Baggett for a while. Musquin crashed and Millsaps got the better of Baggett to net the sixth, with Baggett right behind him.

As for Musquin, he’s followed three-straight podiums to start the year with two ninths. He was really fast in Oakland, though, falling as far back as 18th on lap six after a crash. He was fast down the stretch, though. Remove Musquin’s bad lap with the crash, and he had the third-fastest average lap time of the 450SX main.

"It was tough! It was really tough, and honestly, at one point in the main event I was pretty excited for the race to be over," said Smartop MotoConcepts’ Justin Brayton about the track conditions to our Steve Matthes. "Just because one lap you’d hit everything good and the next lap you try to hit it exactly the same and you’d be flying into the Tuff Blocks or whatever. First practice I felt pretty good, second practice I struggled, and then just kind of struggled for the rest of the night." Brayton finished 12th.

Brayton was in the battle with the lead pack last weekend in Glendale, when he got a good start and finished sixth. This time he says he got pinched into the Tuff Blocks in the first turn, which buried him in the back of pack, and he couldn't jump the triple on the first lap. Instead of battling with the likes of Ryan Dungey, he ended up getting lapped by him. "That’s the last thing I want to do is get in their way—I’ve been in their position before where I’m like ‘Lappers, get out of the way.’ So I didn’t want to upset their race, and the crowd was going nuts so I knew that something was going on, that they were having a good race. When Eli went by me he was on Ryan, I don’t know exactly what happened from there. When I’m in 12th I don’t want to mess up the guys in first."

Meanwhile Brayton's teammate Vince Friese got a much better start—the holeshot. "It [holeshot] shows how good our equipment is," Friese said to Matthes. "I couldn’t hang on very well, I was sick this week and was having trouble breathing. The track was gnarly but I kind of like that, the slower pace and the ruts when it’s kind of more technical. But I was sick all week and I couldn’t breathe. After a while your body starts shutting down and then your mind starts shutting down. It gets frustrating and it’s hard to find a flow when guys are going by you. But I’m learning and I love being up front like that. I feel like that’s a good key to why I‘ve continued to progress, because I can start up there. I feel like two, three years ago I could maybe stay up there for two laps, now I can maybe stay up there for five.”

The RCH Suzuki team has had some struggles this year, with just one top-10 finish courtesy of Justin Bogle at round two in San Diego. Bogle returned to action in Oakland after missing last week with bruised lungs, he looked fast in his heat race but a crash in the main held him back. He finished 22nd, but at least he got out healthy enough to regroup and head to Dallas. “It’s definitely frustrating,” said Bogle in a team statement. “I had a solid heat and a really good semi so I felt good going into the main. I had some trouble in the sand when I was going to make a pass, went down and hit my chest again. It’s tough to swallow but we’ll keep working hard. We’ll get it.”

The rutted conditions usually work in favor of Bogle’s teammate Broc Tickle, but it didn’t click on this night. He took 11th. “It was a tough night but overall, I feel pretty good,” offered Tickle who now sits 14th in points. “I had a really good heat race, started up front and pretty much stayed there. I got a bad start in the main and had to play catch up the rest of the night. We’re getting ready to head east so we’ll work hard this week and be ready for Dallas Saturday night.”

Austin Forkner finally showed signs of being a rookie on Saturday night. Following four rounds with only a few small mistakes, the first rhythm section caught the rookie in his heat race and main event. In the main, he clipped an on-off jump and crashed on the first lap, collecting a number of riders with him. The Monster Energy/Pro Circuit Kawasaki rider would get up under his own power and per a Kawasaki press release will be ready to go this weekend in Arlington. “Today wasn’t easy,” said Forkner. “I struggled to find my groove and get a clean lap in. Once I made it through the heat race in one piece, I made a mistake in the main and it ended my race. I have to take the good with the bad and just move on. We’ll go to Texas and give it another shot before the break.”

If u happen to be an attractive female in the Oakland area a massage would be greatly appreciated after this one https://t.co/Up4sccduRJ

Josh Hansen was one of the riders collected in the Forkner melee, and he had nowhere to go and literally rode straight over Forkner’s head before flying over the berm. After collecting himself, Hansen was making his way through the pack before landing on AJ Catanzaro, after the BLUE Buffalo/Slater Skins Yamaha rider hit neutral on the face of the double before the sand section and had to roll the jump.

“Had a great night going, and was coming through the pack in the main event. Hit neutral on the face of this double and had to roll, Hanny had nowhere to go,” wrote Catanzaro on his Instagram page. “Thank God there's not a scratch on me, bike was just mangled. Josh got up and walked away as well. All in all, tonight was a HUGE step in the right direction for me.”

It was a sour ending to an otherwise spectacular day for Catanzaro. The veteran qualified second overall from the C Group (he was aided by a relatively dry track) and finished third in his heat race. Catanzaro finished 19th. Hansen was credited with 21st.

The move down to the 250 class for Phil Nicoletti and Kyle Chisholm has certainly had its speed bumps, but in Oakland, the two veterans put in season-highs. Nicoletti matched a 250SX career-high fifth on Saturday. The last time he had a top-five in the class was 2012, when he finished fifth in Arlington and Houston. Meanwhile, Chisholm’s seventh was his best finish in the class since a fifth in Salt Lake City in 2010.

The conditions in Oakland seemed primed for Yamalube/Star Racing Yamaha’s Aaron Plessinger. The former GNCCer looked strong in his heat, winning over points leader Justin Hill. But in the main event, Plessinger got caught in Forkner’s crash and had to work through the field again. He fell later in the race and finished sixth. He’s now 16 back in the points chase.

A lot of moving and shaking amongst 250 satellite teams prior to Oakland. Noah McConahy left the JMC Motorsports team to fill-in at 51FIFTY Energy Drink Yamaha for the injured Tyler Bowers. McConahy didn’t have much time on the bike prior to Saturday, and it showed in qualifying. He turned it around in the main event, though, and captured his first-ever 250SX top-10 with a ninth.

"Everything with the bike and the team has been spot on," said McConahy in a team statement. "I've been improving every time I'm on the bike and the team has helped every step of the way. I struggled in the qualifiers but we stayed optimistic and focused on the main. From far back in the pack, it was one of those races when I just concentrated on the next rider in front of me and did whatever I could to move forward. I'm ecstatic to land a career best in my first ride with 51FIFTY and I only expect to improve from here."

Justin Starling, who was previously with Slaton Racing, moved over to JMC Motorsports and scored his first-ever top-10 with an eighth place finish.

Okay, deep breath, there’s more. Heath Harrison, who is filling in for the injured Bradley Taft at CycleTrader.com/Rock River Yamaha, also placed inside the top-10 for the first time in his career with a 10th. Former Troy Lee Designs KTM amateur Justin Hoeft made his pro debut with IBCorp Yamaha, which is managed by Ryan Hughes. Hoeft made it in via the LCQ after Bradley Lionnet crashed on the final lap. He finished 17th in the main event. And finally, Barn Pros/Home Depot Yamaha got Chris Alldredge back from a collarbone injury, but the former Monster Energy/Pro Circuit rider failed to make the main event.