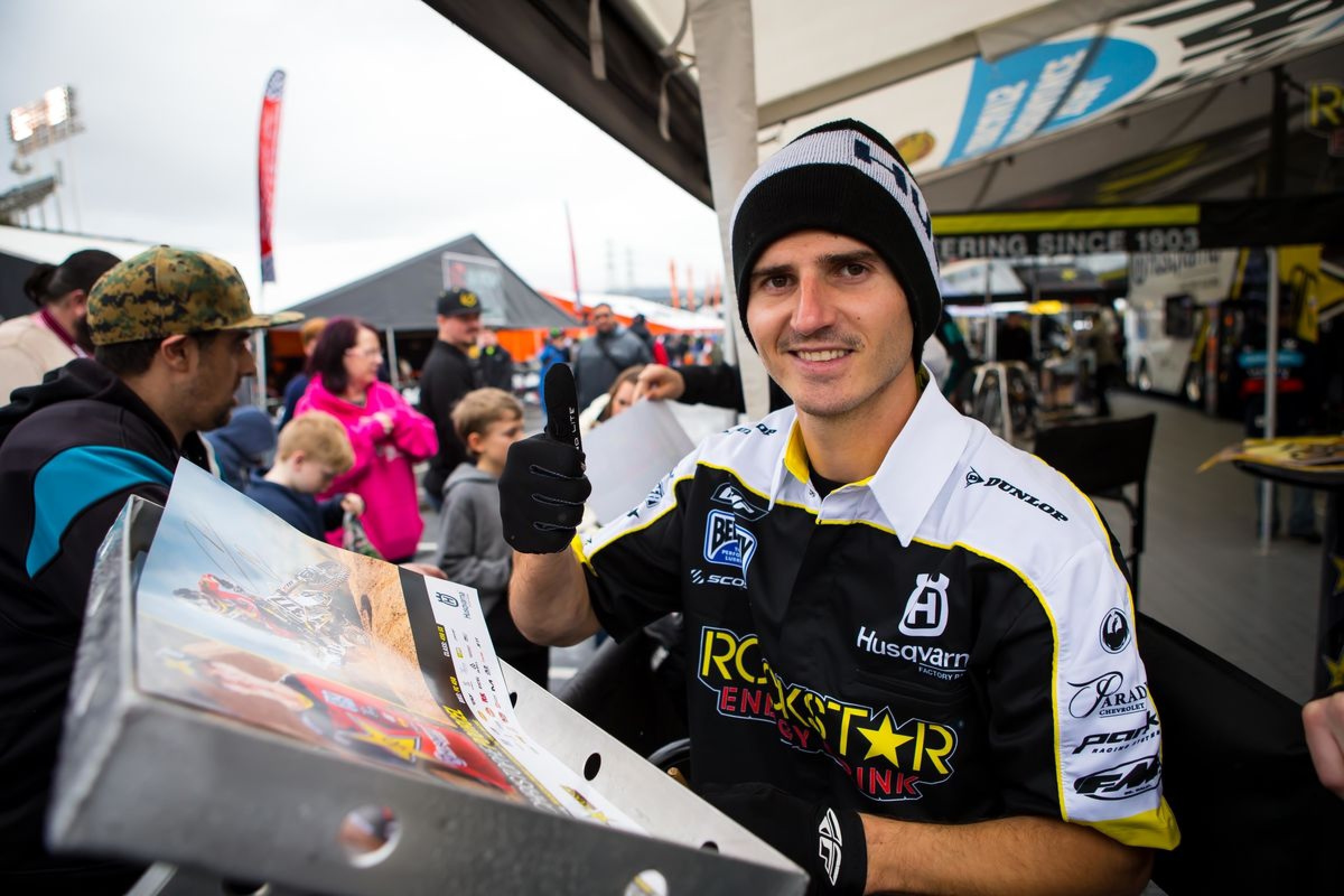 Last week Rockstar Energy Husqvarna Factory Racing announced Dean Wilson would be joining the team as Christophe Pourcel steps away from supercross to focus on the next stage of his career in Canada. The news came as a bit of a surprise—while Pourcel wasn’t getting the results he was capable of so far he’s always been a guy who can seemingly turn things around with the snap of a finger. We caught up with him in the pits, and it turns out there’s more to this story than we thought.

Racer X: So you’re headed to Canada, eh? What led to this decision?
Christophe Pourcel: Many things. There was already talk, if I remember right at the end of 2015, there was talk with [team owner] Bobby Hewitt about it. Then at the end of last year, when I broke my neck, we were talking about if we were going to go to Canada this year. We talked about it again two or three weeks before the season. I’d started to ride in November after the neck injury and we thought, “Let’s just see how it goes.” I went to California and everything was going pretty good, but there was a little soreness in my neck. It’s always tough to have inflammation on the neck—I’ve had two breaks.

Were these problems stemming from that crash you had at the Washougal National last year?
Yes, that was the second time. I broke my neck, my C3, right after Daytona so I had to take the rest of supercross off and come back for motocross. Then I broke my C6 at Washougal when I crashed. That was a couple more months off, and still today, it’s sore. Bobby and I talked, and I asked if we could get the program ready, could I go to Canada? He said yes, and to let him make some phone calls. Everything was ready to go. They’ll move the second semi to Canada, and Rockstar is big there—they’re a series sponsor. I wanted to do this series for a while, it’s just sad that I’m leaving supercross, but sometimes you have to make a decision and move on. I’ll take some time to heal a little more and try to move on to something else.

So these are plans that have been in place for a while but are just happening early because the timing is right?
The time is never right. You never know when exactly, but with my injuries and with the program being able to go there for me right now, then yeah, the time was right. I’m going to get better eventually, but I don’t want to struggle with my neck. It’s tough with the crashes I’ve had. I don’t want to crash again, I want to get to 100 percent and I think I need a couple more months for that. We all know supercross is more dangerous and has more risk than motocross.

Especially on a day like today [Oakland] with all the ruts and mud.
Yes, especially today, but last week we saw guys get hurt too. Tyler Bowers, Jeremy Martin, Weston Peick, many guys. You really have to be on your toes.

So depending on how things go is there a chance we’ll see you back in supercross in 2018, or 2019?
No. We’re moving on to Canada, and we’ve talked about doing some EnduroCross as well. I’m not doing EnduroCross right away this year because it’s so fresh and I want to focus on Canada. But I’ll probably do some eventually because it’s a lot of fun. I think it’d be fun to go that way as well. But there are other races too, like snocross—Rockstar is there as well. There are many things I want to be part of.

"I’m safe, I’m good, and everybody is happy. The team is making it happen. I’d rather try to win there than be scared riding supercross."

So you’re wanting to branch out into all sorts of other sports. You might even be racing snowmobiles!
Probably no snowmobiles, but as long as it’s on a bike and I can do good and represent. I don’t want to go to snocross and finish last and represent Rockstar that way. The goal is, as long as I can go somewhere on the bike and represent them well and do well for myself, that would be amazing.

It’s too bad Husqvarna doesn’t make watercraft!
[Laughs] Yeah, jet skis, boats, we can race anything! But going back to supercross, you won’t see me back. The plan was to go in 2018 and not come back anyway, and we’re just taking that step right now. My results have been so-so and I’ve been sick. I can make the main and get a top 15, but is that enough for me? I don’t think so. Not after winning so many races and winning two 250SX Championships here. Last year and the year before I was top five outdoors, and even that’s still tough. As long as you can fight for the podium, anywhere you can compete, it’s rewarding. We went to Bercy two years ago I think and I finished second and won a main. I talked to my wife and I was like, “It’s been a while since we won anything, and it feels good!” Even though not everybody was there, at least we won something. We did something right, and that felt good.

Your struggle with injuries hasn’t been easy.
No. Being paralyzed and coming back here and winning, then breaking my neck twice last year and almost getting paralyzed in the second injury last year, it was pretty sketchy, right next to an artery. That’s why I made the decision to go to Canada. I’m safe, I’m good, and everybody is happy. The team is making it happen. I’d rather try to win there than be scared riding supercross. I didn’t want to move on, but at some point you really just have to make the decision. I feel like everyone in this sport that’s been there for so long, they love it. A good example would be Mike Brown. You can see he stayed and stayed stayed. It’s tough to get away from this sport because we all love it. It’s the same thing for Chad Reed. We know he’s still good, but at one point he’s going to have to leave.

Is there a side of you that’s relieved to be leaving supercross?
Risk wise, for sure. I’m relieved on the injury side; I’ve been talking about that for a while. Every weekend we see people crash, and nobody wants to see that. The tracks are not what they should be. They should be a little safer I think, and it’s sad to see when they go fix the track right after everyone crashes in the same section. It’s sad to see good guys train so much, then they’re not there. If I was a fan I would love to see my rider out there, but then he’s not there. Every fan has their guy, and sometimes he’s not there. At the end of the season, in the last five or 10 years, a lot of those fans don’t get to see their guy. I wish they could find something that’s a little more safe.

You’re racing a 450 in Canada. What’s the goal?
To be on the box and try to get the title for the team. I’ll have my factory bike, the semi will be there, I’ll have everything I have here. It’ll be the same. I’m very happy to have all of that up in Canada.