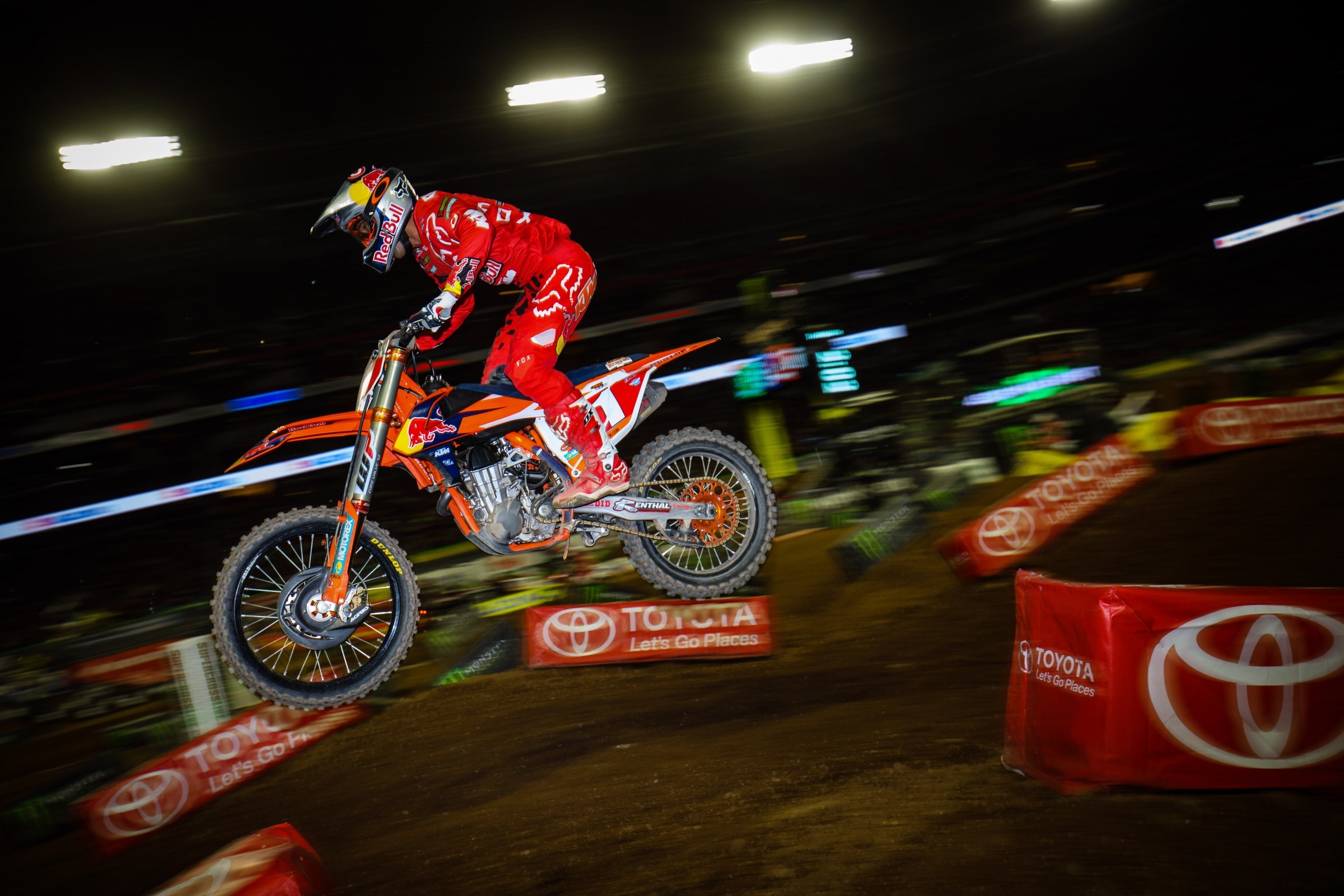 3 on 3 Questions from Phoenix

1. Why did the Phoenix track lead to such good racing?

Jason Thomas: There were several different jump combinations that could be pieced together on the Phoenix track. Riders could make up time and move through the pack if they perfected a section. The tough jumps also led to mistakes which always creates excitement. When the track is too easy, riders put in perfect laps and it's incredibly hard to pass and move forward from a bad start. Easy tracks make the racing robotic and boring.

Jason Weigandt: It's a darned miracle the jump combos worked out the way JT described. Every track is built with rhythm options in mind, but the best riders figure out the best way through each section, and the game is over. The triple-quad at Phoenix was a thing of beauty. Just hard enough to where most couldn’t do it, but just doable enough that a few guys, like Chad Reed, Eli Tomac, and Justin Brayton, could. Watching it in practice, I thought for sure the quad would not be used by main event time. Really impressive that a few (three) did.

Unfortunately, that magical combination won't come around often, no matter how hard the track crew tries. I like the start situation and think that's repeatable in other designs. The two turns connected to the start—turn one, and the turn after the whoops, allowed multiple options for cutting underneath and making passes. In fact, every good run through the whoops created a pass, then another rider getting back underneath, and then a side-by-side drag race down the start and into the next corner, which also had two lines. I'll take that section and that action in every single supercross track for the rest of time, please.

Also, this had to be the only sand section with two real lines and plenty of passing, right? What was going on with this track?

David Pingree: I think it was a combination of a large stadium floor, some awkward obstacles that broke up the flow, and technical sections that forced mistakes. More floor space lets the builders offer faster sections and unique obstacles, like the sandy loop before the over/under that created a bunch of passing opportunities. The longer straights gave riders more time to get past another rider. The technical rhythm lanes that were rutted caused mistakes and let riders make or lose time that they otherwise wouldn't have. We need more big football stadiums in our lives.

2. Wait. This season isn't just going to be a Ryan Dungey romp?

JT: I do think Dungey will win this title, but it won't be 13 wins in a row a la Carmichael in 2001. He is going to take his wins when he can but stay on the podium and rack up the points. That's what he does every year. The only way to beat Dungey is to win races. He won't make the big mistakes that allow massive points gains. Winning is the only option.

Weege: I love, love, love this time of the season. First of all, most riders are still healthy. Yeah, Ken Roczen and now Weston Peick are out, but if you look at the top 10 from Phoenix, man, this field is still stout. Second, everyone still believes they can win. Did you see Cole Seely attacking Dungey and trying to fend him off? There isn't an established pecking order this early, everyone fights for position against everyone. Third, you often see big changes in the early races while dudes get bikes sorted, and that's magnified this year with all the rain on the test tracks. Look at Tomac, Reed or Brayton’s massive gains in one week. This stuff isn’t going to happen at round 12. This time of year is the time for unpredictability.

I didn't expect Dungey to make all of the 14 remaining races boring. Other stuff is going to happen. But even though Dungey yelled “There ain’t no crown” to say no one has been crowned champion yet, he still looking as good as ever for this title. Just saying.

Ping: Slow down, Skippy. Last weekend was one race and I think Dungey is still going to be the guy to beat. It's great that Eli came around and I think he will continue that momentum moving forward. Still, he has about a million points to make up on the champ and Ryan is still going to do some winning.

3. Chad Reed. Talk about that dude.

JT: No one believes in Chad Reed more than Chad Reed. He could finish in ninth place at every round of the series but still tell you he will win the last round on that morning. That's just how his mind works. So, when he gets a good start and things are clicking, he is able to turn it up to a level that most aren't able to reach. His win in Atlanta 2015 was similar to that. He finds another level when the opportunity presents itself. The tough part for him is when he starts 10th, to still have that intensity and pace that will bring him to the top five. Age plays a role in that but he also gets trapped in the pace around him. When he starts up front, being trapped in that pace can be a great thing, though. One thing's for sure, it's always a bad idea to count him out.

Weege: Man, just when you think this dude is finally going to be proven wrong he comes through again. Reed’s results at the first three rounds were okay, but I have a suspicion he was especially frustrated because he was battling Weston Peick in every race and couldn’t get him (by the way, Peick and Cooper Webb were retroactively penalized for jumping during a red cross at Angel Stadium. The FIM penalized them a few points. Technically, Reed can say he might have gotten Peick had Peick not jumped, but, the bottom line is Weston crossed the line ahead of Reed at the first three rounds). Why would this matter? I have a feeling Reed is okay battling with dudes like Dungey, Roczen and Tomac. But Peick is not only an animal, he’s a different animal, and he flies against Reed’s feelings that some riders are just born champions. Peick was once a privateer, he was once a lapper. I think a few riders still carry that old stigma of “I should be able to beat that guy” and based on a few bits of information I’ve picked up through the years, I think Reed is one of them (never mind that Peick was a strong fifth just last weekend and has long proven he belongs).

Anyway, maybe this is just where Reed is this days? Maybe age has finally slowed him and the podium will be a big reach? Nope. He just needed to get the bike changes he’d been asking for, and he’d prove himself right again. You know what? In the press conference, Chad said with a better start he thought he could throw down with Eli, and Tomac himself nodded yes. Everyone knows better than to ever tell this guy he can’t compete.

Ping: What an animal. I don't know if supercross comes so easy to him that he doesn't consider the consequences of crashing or he just has bigger balls than most men. Either way, 99.9 percent of all humans don't see the rewards of racing being worth the risk when they are in their mid-30s. Maybe the truth is that Reedy is a little nuts, and you know what? I dig it. I'm pulling for this crazy, kangaroo punching bloke to get a win this season and after last Saturday night I don't think that's a stretch. Let's do this, Reedy, you crazy sonofabitch ... Oakland is all yours. You twist the throttle and I'll bring the lithium and the straight jacket.