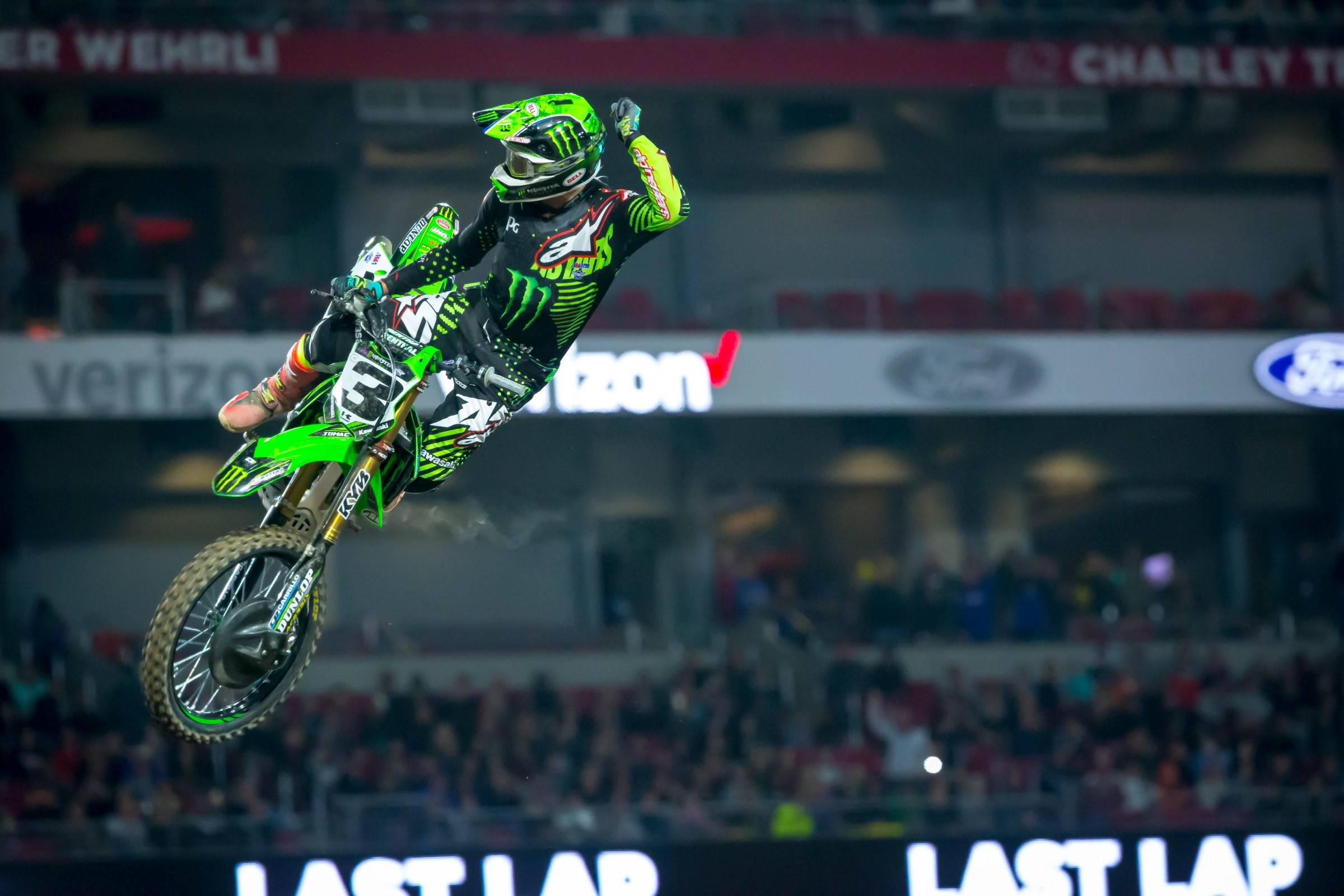 Eli Tomac is back! Last weekend in Phoenix we saw a very different Eli Tomac than the three previous rounds. Tomac had been in some sort of arm pump-induced funk. He had been starting fairly well and running up front in timed qualifying and heat races but when it came time for the main events, things were unraveling. Not only was he unable to maintain the lead pace in the second half of the races, he was moving backwards in a big way. The sponsors and people involved in his team effort had to be scratching their heads. After all, Tomac was tapped by Kawasaki to fill the huge hole left by Ryan Villopoto and his four consecutive supercross championships. That appointment brings big money, but also big pressure. To say he wasn’t meeting expectations in the first three races of 2017 would be putting it as mildly as possible. Thankfully for everyone in that camp, Phoenix was a whole different ball of wax.

Tomac came out swinging in both timed qualifying and the heat race. He was second fastest overall in the practice sessions and then won his heat race in convincing fashion. This wasn’t shocking, though, as we’ve seen this same level of performance all season. It wasn’t until the main events that things went awry. There seemed to be no warning for it, just a sudden and noticeable change in his lap times and the lack of aggression in his riding. That’s the tell-tale arm pump signature as riders are simply trying to get around the track instead of aggressively pushing the envelope. It becomes dangerously tough to keep dexterity in your hands when arm pump sets in. Applying throttle, feeding the clutch, and also using the front brake are all compromised. This is a concept that almost all racers know and understand (if you are one of the lucky few that don’t get arm pump, I hate you). Once the arm pump talk surfaced, Tomac’s struggles made sense—his rides had all the classic signs of it. So, what exactly happened in Phoenix?

Kawasaki has tried some new components in recent weeks, switching clamps, forks, settings, etc. They have basically thrown everything at his bike in a flurry of desperation. Something had to change quickly. Apparently something worked. That main event ride was nothing short of incredible. They didn’t show much of Tomac on television but trust me when I tell you that he was riding the wheels off that Kawasaki. He was more aggressive than anyone else and finding traction where others couldn’t. The last time I saw him on that level was Hangtown 2015. That May afternoon was remarkably similar to last Saturday night in Phoenix. He got out front early and if he knew Japanese, would have said sayonara. He dropped a 59.1 second lap time right out of the gate and backed it up with the quickest times that anyone would post all night. His gap to second-place Cole Seely was jumping by multiple seconds each and every lap. He finally pushed the gap up to 18 seconds before pulling back the reins. For those who aren’t as familiar, 18 seconds on a supercross track might as well be a full minute. He was so far ahead, he was on a completely different section of the track than the rest of the top-five riders. I actually wondered if Chad Reed thought he was in the lead when he got around Ryan Dungey because Tomac was nowhere in sight. It would have been an understandable mistake. Tomac was simply gone.

Just like Hangtown, he simply rode on a different plane than anyone else. Chad and Ryan and Cole and Davi were all putting in really good laps, pushing the pace and each other. None of that mattered on Saturday night. Even when Chad and Ryan got a clear track and were able to push their limit, they were still over a second slower than Eli. That’s not normal. Supercross lap time gains are usually measured in tenths, not seconds. It was a very impressive performance and at the most unexpected time. His corner speed and aggression were both on a level that most of the supercross elite will never reach.

The most important question is, what now? Is that the new normal for Eli? If so, he is going to win a lot of races. Ryan found Ken Roczen’s pace after an incredible round one ride at Anaheim. Will he be able to do the same with Tomac? That’s an interesting proposition. He wasn’t able to find that pace in 2015 and it wasn’t until Tomac’s huge Colorado crash that the series turned. On the other side of that coin, though, is the fact that Dungey didn’t have the night he wanted and yet still improved his points lead from seven to 15.

That’s the magic of Ryan Dungey, isn’t it? He has a night that he probably wasn’t thrilled about, loses by over 10 seconds, and still almost doubled his points lead. As Ricky Carmichael used to always say, championships are won on your bad nights. Minimizing the damage is the most valuable tool in the arsenal. Tomac’s bad nights were ninth place struggles. Dungey’s bad nights thus far still saw him on the podium. Will that continue or will Tomac be able to rack up the Ws?

That’s what this title will come down to. Can anyone win enough races to overcome Dungey’s onslaught of podium consistency? He’s only missed two podiums in the last 38 races, folks. He doesn’t give anyone a chance to capitalize. The only way to beat him in a championship is exactly what Eli Tomac’s predecessor, Ryan Villopoto, did. Simply go faster. He did just that last Saturday.

Tomac sits 20 points down with 13 rounds left on the schedule. Marvin Musquin is 15 down. The path is clear. To take this title away from the reigning champion, someone is going to have to wrangle it from his grip. Winning races is the only way to do it.