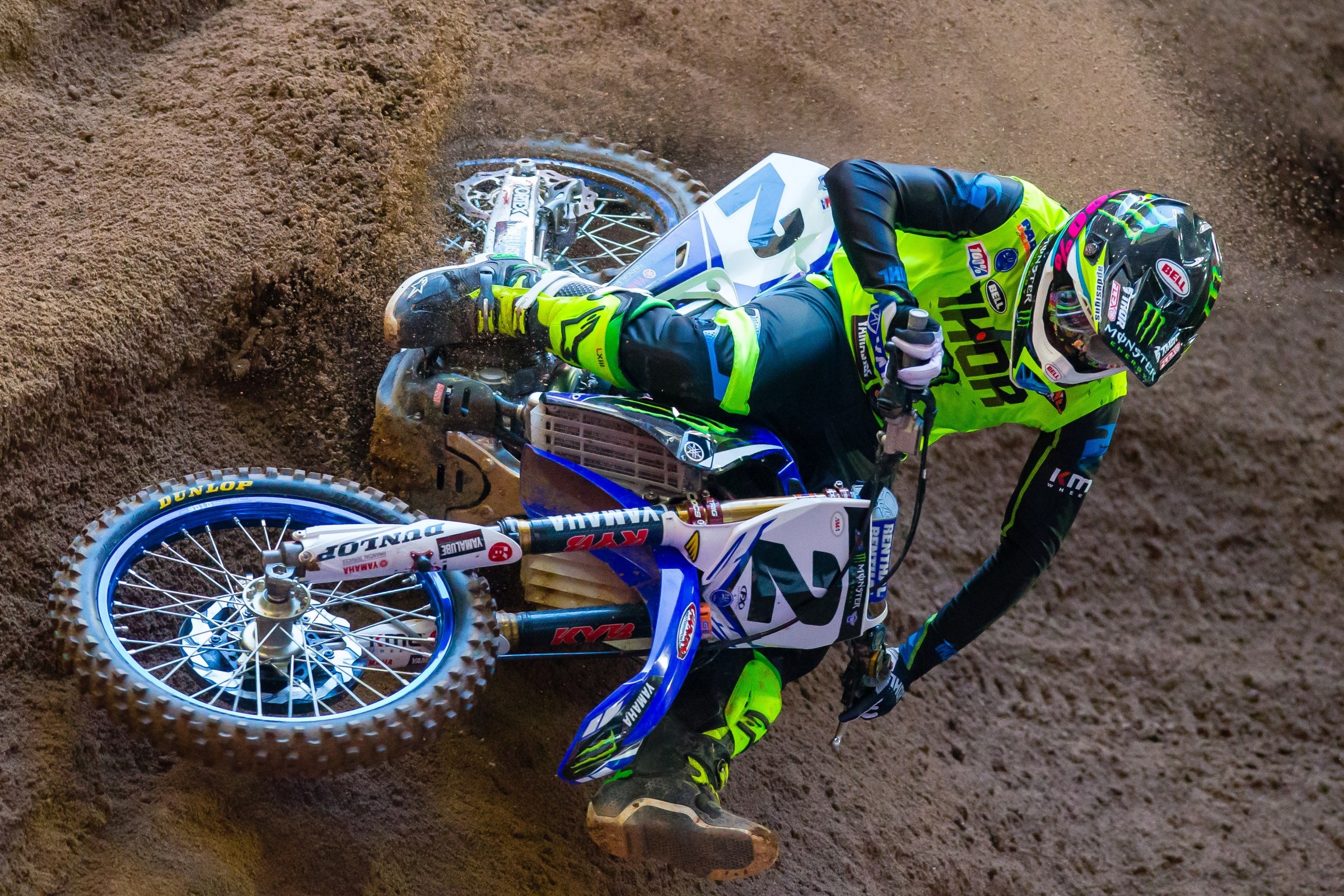 Between Webb and Seely

Cole Seely is now the lone soldier for Honda HRC with Ken Roczen out due to injury, and he and the team and are trying to hold it down. Seely was in a podium spot for most of the race, but eventually Ryan Dungey and Chad Reed out battled him and he landed in fourth. Afterwards, Seely told us it wasn’t his best day.

Racer X: How was your day?
Cole Seely: It was okay. Not the day we wanted but still fourth and still in a good position for the series.

I felt like you rode quietly today. You were kind of all by yourself a lot of the racing today.
Yeah, I struggled. Actually the semi I felt really good. I was really stoked on my bike. I just couldn’t put it together in the main. The track broke down and was really slippery. Just really, really hard to ride and be safe and be consistent on. It’s tough for sure.

What was it like the first weekend with your new teammate not being there? Did it kind of affect the whole vibe? I’m sure the whole team is pretty down in the dumps right now.
Yeah, we all are. We love Kenny. He’s such a blast to have around and so much fun. We were just starting to get really, really close. We’ve been FaceTiming each other and Snapchatting each other all the time and texting and all that stuff. He’s a little loopy right now because he’s going through some pain for sure, but it’s super good to talk to him. It definitely makes me happy knowing that he’s not down in the dumps completely bummed. He’s got good people around him for sure. Shorty [Andrew Short] stopped by and saw him, and obviously his girlfriend Courtney is awesome. She’s there with him the whole time. But it sucks. I got a little bit of grief from some fans because I didn’t say anything publicly, but it’s a different relationship. I’m texting him. I know what’s going on, how he’s doing. I’m personally telling him, “Hey bud, I’m so sorry what happened,” and all this stuff. I didn’t even expect a response from him. But it’s a different level for me. I don’t feel I need to make a show out of it.

I saw that on your bag tag, 1494.
That’s funny because two weeks ago when we came out here we were on the phone with each other like, “Hey, are we going to Phoenix? Let’s book a flight.” We were texting back and forth like, should we get this flight, this flight, this flight? We fly out and we got all the way out here and we were putting our bags in the van and we were like, “Dude, flight 1494!” It was kind of like the ongoing thing. Like, no way! What are the chances of that? So when I had to fly out here again I flew out on the same flight. I bought the same flight and sent him a picture of it. It’s kind of a little inside joke.

Cooper Webb finished eighth after winning a race-long battle with his old 250 rival Marvin Musquin. And while the Monster Energy Yamaha rider did finish fourth last week in Anaheim, he actually thinks he rode better this time, and struggled only with his start. Well, the gate pick didn’t help, since Webb was looking to transfer out of his heat race until Jason Anderson took him out on the last lap trying to take the position. You know Webb—he’s not going to be intimidated by that stuff.

Racer X: How was it today?
Cooper Webb: Weekend was good actually. Qualifying went really well. Both sessions I think I was second, so that was pretty cool. We went to the night show feeling good, confident, ready to go. I made my way up to fourth in the heat and thought I had the transfer and then kind of got blindsided by Jason [Anderson]. That was a bit unfortunate. Kind of a bonehead move I felt like. But I went to the semi and got a holeshot and won that by a good bit, so that was nice. Main event I just got a bad start, but I rode really well. I made a bunch of passes and got into about eighth or ninth. Me and Marv actually battled the whole race. I ended up getting him with like three to go, but we passed each other at least four times each. It was pretty fun. Obviously you want to be up there but I felt like this weekend was the first weekend that I’ve had the confidence. I felt like I belong up there. I went to the line knowing that if I got a good start I could podium. That’s always nice. I think I’m back.

You rolled down to that semi with an ice bag over your hand. Just so you can answer it now—just bruised up? It’s not like you re-injured anything?
No, just a bruise. Nothing major at all. Just the impact, it kind of swelled up. So just trying to get some swelling down.

These last two weeks have been a big change. Is it just more of a relief from stress or have you guys done a lot of stuff on the bike?
We’ve changed some stuff on the bike, but also it’s mainly me. The bike was good. Obviously we’ve been working, we’ve been making it better. I think the biggest thing is just going racing. Practice days are so much different. For me I think it was just clearing my head. I was caught up in all the bullshit and kind of went back to my old ways and kind of started doing things a little differently. I’m sort of enjoying it again. So I think that’s what’s contributing to my racing and my riding. I’m motivated. I got beat pretty bad those first two. It’s a pretty big eye-opener and motivator. We’ve got a long season and I’m glad where I am after round four. Plenty of racing to go.

So how did Jason come up on you? Were you expecting that? Did you know that he was in there? He came up on you pretty quick.
I actually didn’t really know he was there, but I wasn’t too pumped on it. I think it was a move where both of us were going down, or really that was the only outcome. It kind of sucked. It affected us both. He’s known to do stuff like that, so it’s a little shitty. There’s nothing you can do but accept it I guess. But it was nice to beat him in the main.

That semi you were pulling a wheelie and grabbing gears.
Yeah, I was pretty ticked off in the semi. I felt I got a good start and it was a nice holeshot, actually. That was a nice refresher after a heated moment like that. Unfortunately I didn’t get that start in the main, which kind of sucked. But my starts are a lot better overall this year so it’ll be good.