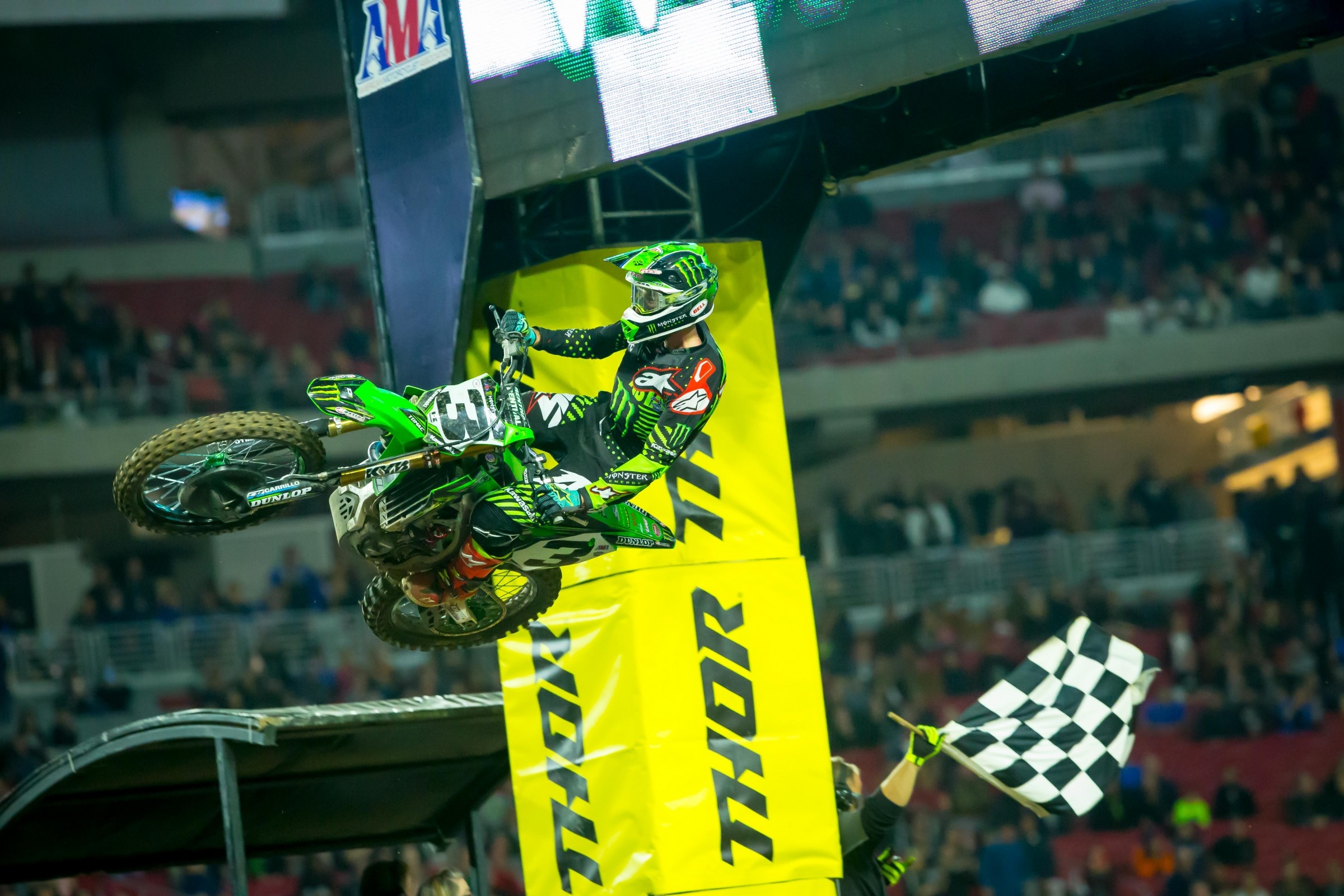 Rumors of this championship’s demise have been greatly exaggerated. A week ago, Monster Energy Supercross took on a familiar tone, as Ryan Dungey won and a main championship challenger, Ken Roczen, crashed out of the series. When Dungey left Anaheim with the points lead, too much of the rest of this year seemed like a foregone conclusion.

That, my friends, is why they run the races. The racing looked totally different tonight in Glendale, Arizona, as Dungey looked mortal and Eli Tomac took on the role of the super human, dominating the night and flipping the script on his season completely. The Monster Energy Kawasaki rider had struggled mightily to start the year, but this week he and his team made bike changes, and Tomac found the balance he couldn’t find at the first three races. He also nailed his starts. Tomac jetted off with a big holeshot and pulled away at an alarming rate in the main event, building a lead as large as 18 seconds. Most importantly, the arm pump that plagued him at the first three races was nowhere to be found. Tomac said he was embarrassed the way the first three races went, and his team went to work. He wouldn’t elaborate on what changed besides the balance of the bike. In addition, rain forced Tomac to ride in Arizona this week instead of California, and the tracks there are a little less groomed and a little bumpier than the regular test tracks. A change in conditions during the week might have helped him get things rolling.

Also rolling, and also taking his first podium of the season, was Monster Energy Yamaha’s Chad Reed. Yes, never, ever, ever count out Chad Reed, who also struggled at the first three races only to find his groove here. Reed was, as always, blunt in the post-race press conference, saying he told the team what changes he needed to have made when supercross ended last May, but the changes didn’t happen. Only after struggling at the first three races did he get what he wanted, and now that his bike is “in the window” he can ride like he wants to. Reed was impressive, crushing the whoops and also nailing a tricky triple-quad rhythm consistently, which most riders struggled to do. Cole Seely and Dungey were battling for second early in the race, and Reed followed them, and then passed them both when they tangled. From there he steadily pulled away from Dungey to log second.

Dungey admitted he was a little off all night, and he couldn’t get the triple-quad down like Reed did. Still, the champion scored a podium on an off night, which is what Dungey does.

The action was fast and furious throughout the pack, besides Tomac ruling things out front. Dungey and Honda HRC’s Seely went back and forth several times, but Dungey finally made it stick. Meanwhile, Rocky Mounatin ATV/MC KTM’s Davi Millsaps and Blake Baggett, and Smartop/MotoConcepts Justin Brayton were in the mix also. From Seely running second early all the way back to Baggett in seventh, the racing was good. It helped that the track turned out amazing. For the first time in a while, there were rhythm lanes that were tough for everyone to nail every lap, and the whoops were gnarly. Plus, the sand turn actually offered passing. It was good!

In the end, Seely held on for fourth ahead of a charging Millsaps, who almost caught him on the last lap. Millsaps said he’s still trying to find out how hard he can charge, as after a rough off-season of injuries and recovery he’s starting the mains a little slowly to figure out how much energy he has. This time he had plenty left in the tank, so he knows he can go harder, earlier, next time.

Then came Brayton, much improved this week on his new Honda. Baggett was seventh, and then came a torrid battle between old 250 rivals Marvin Musquin and Cooper Webb. Those two passed each other over and over, with Webb finally coming out with a hard-earned eighth. Musquin was ninth, and Jason Anderson 10th. Musquin’s start was terrible and he sliced through traffic until he got into the battle with Webb. “The main event was good, actually, I feel like I have the confidence to just start riding like myself for the first time this year,” said Webb. “I think if I had gotten a better start I could have been up on the podium, which is good.”

Anderson said he was still hurting from last week’s bang up with Vince Friese, and wasn’t even sure if he’d feel good enough to ride. From that, he was happy to grab the 10th.

The track offered up some good race in the 250s, also. Troy Lee Designs/Red Bull KTM’s Shane McElrath dealt with his first adversity of the season when he crashed in his heat race and had to make it through the LCQ. But from a bad gate, he nailed a good start, took the lead from holeshooter Austin Forkner, and started pulling away. Then Forkner’s Monster Energy/Pro Circuit Kawasaki teammate Justin Hill rose to second, and started putting in hard laps just as McElrath hit lapped traffic. Hill cut McElrath’s 3.7 second lead down to nothing. Then the duo did some battling, but Hill won the fight, taking his second-straight win. It was a close one. Forkner held on for third, his first career podium in supercross.