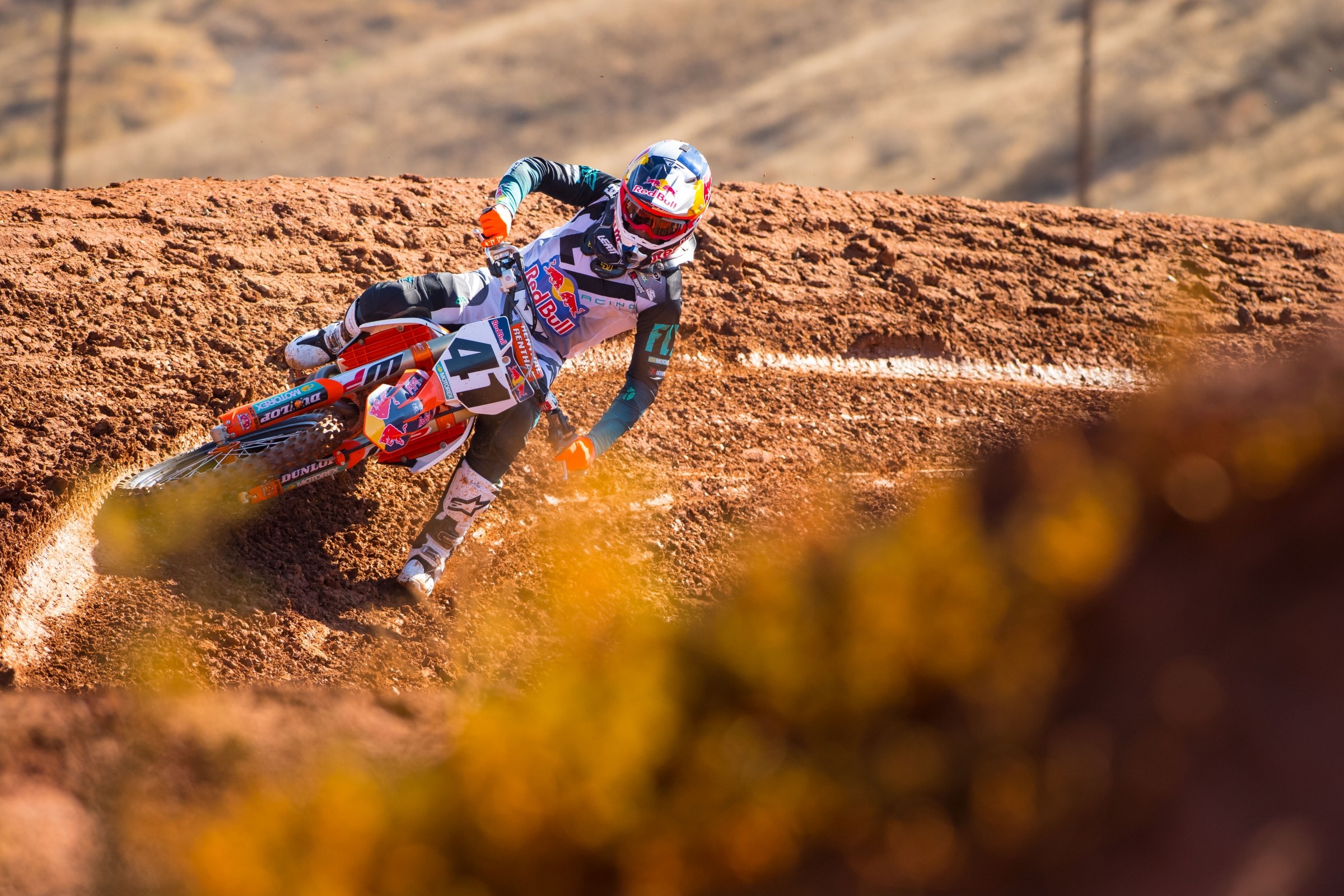 This off-season might be forever known as the year of “too many riders and not enough rides.” As Thanksgiving looms—which is very late—2016 250SX East Region Champion Malcolm Stewart doesn’t have a ride, Dean Wilson doesn’t have a ride, and we’ve still yet to hear official confirmation of RCH Suzuki for 2017, although it should have Justin Bogle and Broc Tickle on board. (Some rumors ripped through the industry this weekend that RCH was shutting down this week, but a source within the team told us yesterday that’s untrue.) The RCH fluctuations could also impact Jake Weimer, who rode for the squad last year. James Stewart appears to want to get a deal of some sort, too.

Rides are highly coveted right now. Knowing that, here are some riders that will be very thankful this Thursday, knowing they’re set in a world where nothing is guaranteed.

Baggett was in a particularly bad spot. The team he was riding for, Yoshimura Suzuki, was shutting down, and he couldn’t pad his resume due to a 2016 season littered with injuries. He found an escape route via Rocky Mountain ATV/MC-KTM-WPS (formerly BTOSports.com-KTM-WPS), taking a full-time 450 spot once held by Justin Brayton and Andrew Short. Baggett was willing to jump on a deal early at a low price instead of holding out for more later. Sometimes that gamble results in getting underpaid, but this time it paid off. Plus, KTM knows he has podium potential outdoors, and that value keeps him on the board.

Baggett told us a few weeks ago: “I knew one of my stocks was going to crash, so I knew it was time to sell. So, yeah, I did a short sale on it and bought something else.”

Millsaps was in career exile at the end of 2015. He was released from Monster Energy Kawasaki during that supercross season, and needed a life line. Rocky Mountain ATV/MC-KTM-WPS team owner Forrest Butler gave him one, and Millsaps was willing to ride for free last year and take bonuses just to get back out on the track. He only made it to Daytona before crashing out for the season. Still, in those eight races, he showed good speed, enough for Butler and KTM to bring him back.

Bisceglia was supposed to have a 250 deal through 2017 with MAD Racing Suzuki, but he left the team after supercross. It seemed strange at the time, but he ended up with a Yoshimura Suzuki 450 replacement ride when Baggett and James Stewart were out with injuries. He kept his name out there by scoring top-10s, and kept his relationship going with the Yosh gang. Then MAD Racing closed down, and when Suzuki finally re-organized their 250 efforts under the JGR tent, Bisceglia was first in line for a spot. He’s not mad at all.

A year ago Reed was in limbo, hoping for a factory Yamaha revival after being forced to shutter his own TwoTwo Motorsports team. It took until literally a week before Anaheim 1 for this team to come together. He told Eric Johnson before the Monster Energy Cup last month, “I feel better about where we are today as opposed to rewinding a year ago, that’s for sure. And then, man, I can sleep at night now! This time last year I didn’t know if the Monster Cup was going to be my last race as a professional. I didn’t have a job and I was unsure whether I could get a job. It was like, shit man, am I going to retire? Is this it? Is this my going out race? My future is now signed, sealed, and delivered and we’re happy and sleeping at night and just working toward the future.”

A year ago Grant was without a ride. TwoTwo Motorsports shut down, and while he filled in for Monster Energy Kawasaki with some solid rides, the team had already added Eli Tomac and re-signed Wil Hahn for ’16. So Grant sat and waited, eventually getting yet another Kawi fill-in spot when Hahn went down, and then signed a full deal for ’17. Grant debuted as a pro during the 2004 season. He’s been on a long ride, but still finds himself in a great spot.

Honda HRC was bringing Ken Roczen on board for 2017, which left Trey Canard and Cole Seely battling for the second spot. Canard had some early-season struggles, so Seely got the nod. Trey then didn’t know where to go. He started talking to the KTM folks, and they gave him a spot. Red Bull KTM is the only factory 450 effort with three riders. Good for Trey.

Pourcel knows what it’s like to be rideless. In 2010, he was coming off of two-straight 250SX East Region Championships and two-straight “coulda, shoulda, woulda” 250MX National Championships, but ended up without a seat for Anaheim 2011. He bounced around at a few spots after that, but didn’t find a real home until Rockstar Energy Husqvarna hooked up with him midway through 2015. His 2016 season was only so-so, but he has a two-year deal, so he’s sitting pretty for 2017. Let’s see what he can do in a contract season.

Tommy retired before his brother Wil, but now Wil is retiring and Tommy is back and still out there! CycleTrader.com/Rock River Yamaha has a 450 spot, and Tommy had it for 2016 and keeps it for 2017. Nice landing spot for him.

Hey, Wilbur didn’t get a 2017 ride, but that’s okay because he found a good post-racing job with GEICO Honda as a test rider and mentor to the amateur riders. Better than digging ditches!

Big Ben picked the wrong time to go really fast on a 450 outdoors. As a pro rookie, he was showing great potential, but we know all about “too many good riders and not enough rides.” Plus, his lack of SX experience means he kinda needs to race 250SX for a bit. Luckily, Rocky Mountain ATV/MC made a spot for him, on a 250 indoors and back on a 450 outside. Forrest Butler’s team is a job creator!