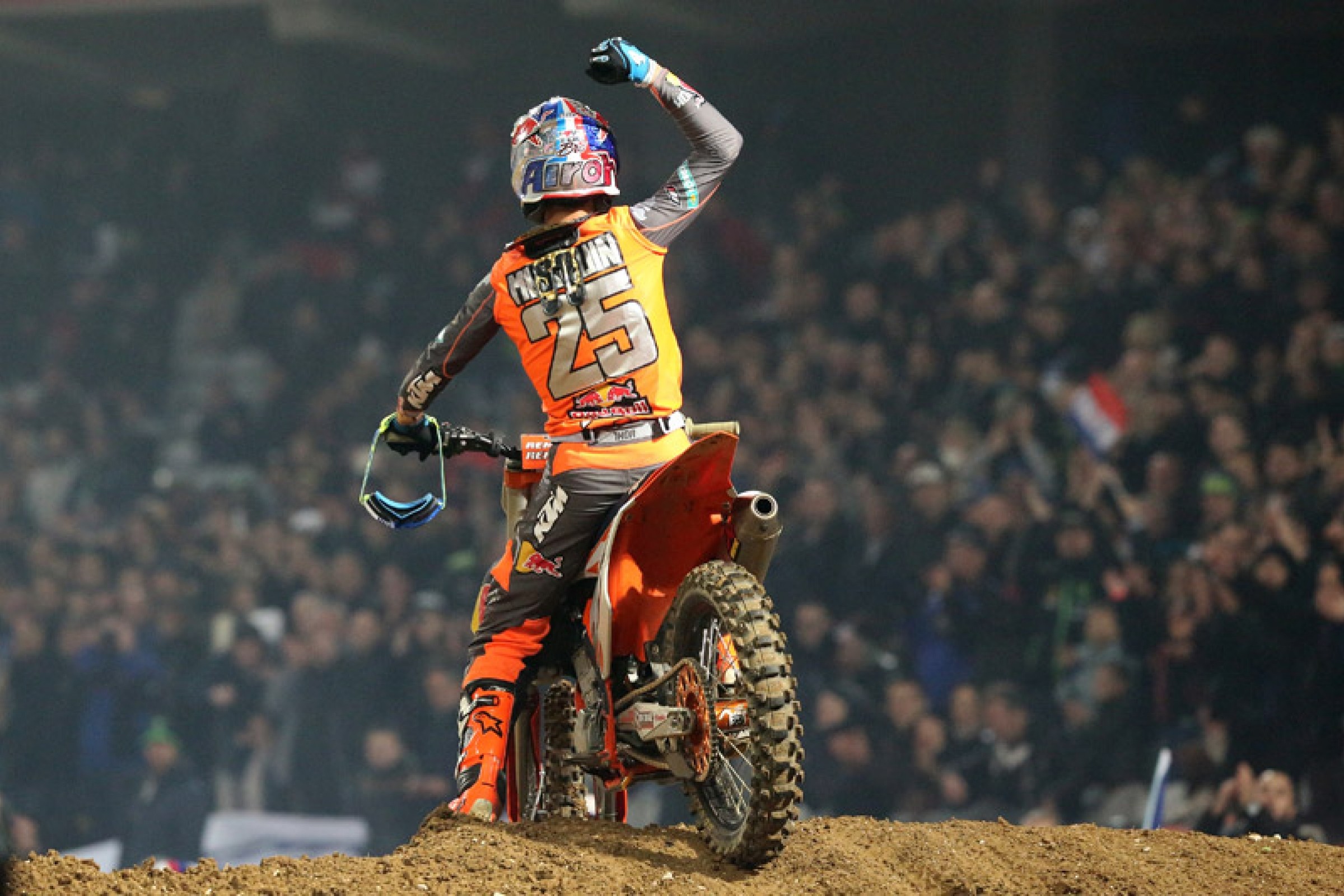 Our man Steve Matthes caught up with Musquin after the race. We also have interviews coming from Down Under at the AUS-X Open later today.

Racer X: First of all, did you make a mistake all weekend? Did you do anything wrong?
Marvin Musquin: Maybe in the whoops a couple times. The track was awesome. They built a really nice track. I really enjoyed it. Always the dirt here in these stadiums in France is so tacky, so rutted, soft, but it makes it very technical. We had some nice rhythm sections where we could go over table-tops, one quad over there, or on-off. Different options. It was not like everybody was doing the same thing, so that was really nice.

You’ve been on a bit of a roll here. I thought your Monster Cup was pretty good, SMX Cup, Red Bull Straight Rhythm. Just kind of a real nice off-season for you.
Yeah, exactly. Training went good in the off-season. It’s only the beginning. A month and a half to go until January and Anaheim, but it’s important to do good results like that. It brings a lot of confidence. Today was not Anaheim, but still it’s important to put in some good laps and for the confidence. For the mind it’s really good.

You and Mookie [Malcom Stewart] were the only guys who were able to quad that thing consistently in the last main. Maybe he did it a little bit more than you. What was the secret? I know it was soft and rutty, but was it a bit sketchy every lap?
Yeah, the little double triple before, you had to be really precise on the landing to make sure you negotiate those ruts perfectly to go off the quad. It was nothing huge but with this sticky rut you don’t want to case the jump and put the frame on the dirt. It would stop you. It was getting rutted but at the end I had a lot of confidence and it was a good test for the bike and the suspension. Everything was going actually really well off that lip. Good practice.

Starting off the gate at Monster Cup, and here, they had a metal grate behind the starting gate. What’d you think?
I think it’s good. I kind of like it. It’s actually technical.  We practiced a little bit. Except that heat race on Saturday, the main yesterday and the two motos today was all holeshots. Really happy about it.

King of Lille, King of Bercy … you’re French. First time since [Christophe] Pourcel in ‘06 a Frenchmen has won it. Fans loved it. It has to be a great feeling.
Exactly. It was definitely the goal. I know Justin Barcia was on it, Malcolm was on it, and Christian Craig. It was good to have those guys here today in Lille. It was good practice. But to win definitely is awesome.

You’re in the record books with JMB [Jean-Michel Bayle] and DV [David Vuillemin] and [Jeremy] McGrath and all these guys.
Exactly. It means a lot. I used to go to the Paris-Bercy when I was a kid for many years and to be able to win right now this year it’s something unique. I’m really happy about it.

When Vuillemin was beating McGrath and he was like their best guy here, was he cool or was he not cool to little kids like you?
No, actually he did something like super cool. He gave me his jersey and I gave him mine. We both put on the jerseys. Obviously his for me was super, super long and mine was super tight for him. But it was so funny. We had a picture of that. He was actually good. I try to be good for the fans too. Sometimes it’s not easy but those people are great.

You were the class of the field. Awesome ride this weekend. There was no race. You made it no racing.
I know. For the crowd it was maybe not very interesting, and maybe the guys behind, they were bothered, but I’d rather be in the lead like that.