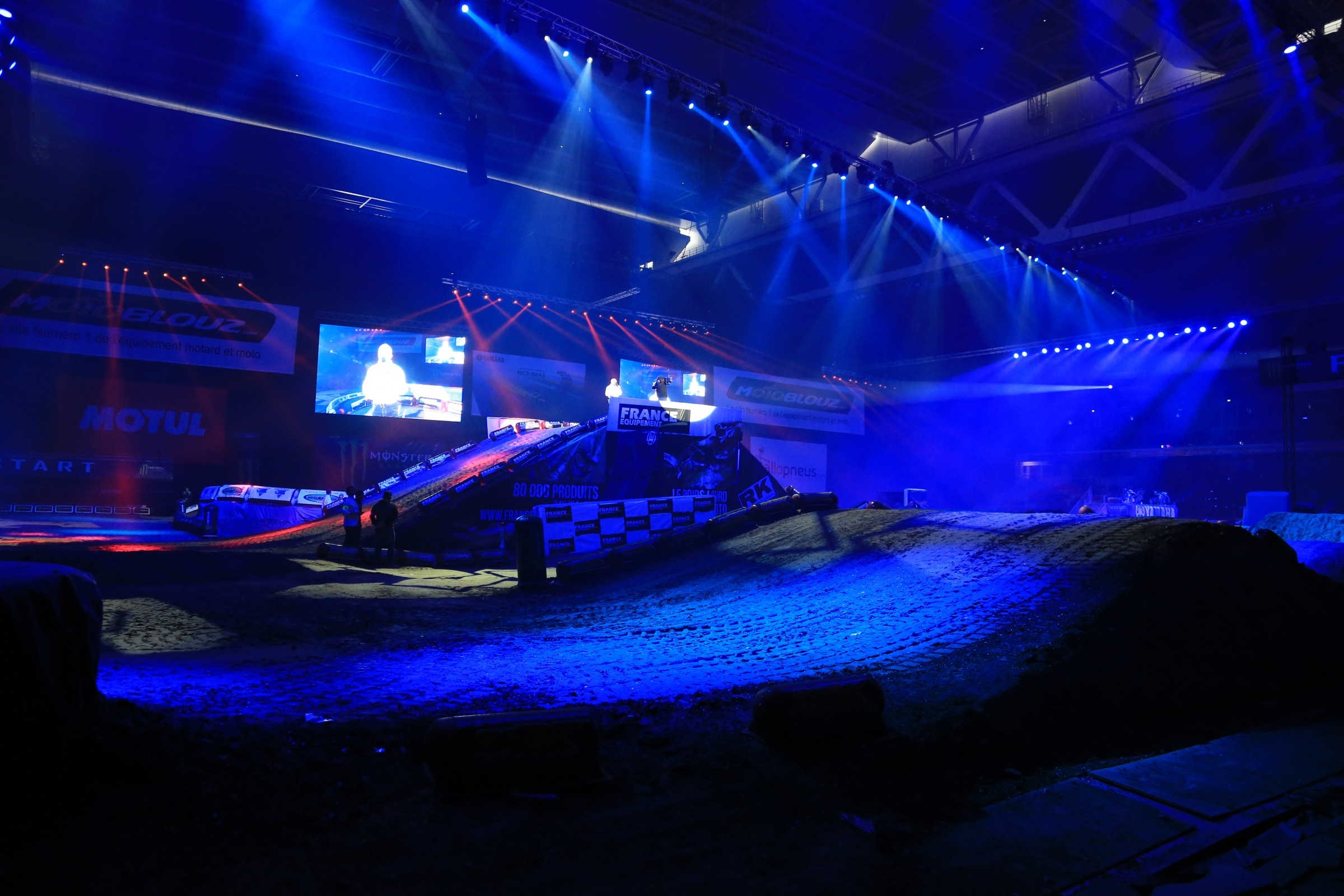 Redux Back to Racin!

When we reach the dregs of the off-season like this, we wish very hard to find some races to cover. In fact, we probably over-cover some off-season races because they’re the only water we can find in the vast desert of November and December. Then this weekend comes in like monsoon season. There’s a double bill featuring the two biggest off-season internationals on the calendar, the Lille Supercross (a new location for the venerable Bercy SX) in France, and the AUS-X Open in Sydney, Australia.

Bercy is the original off-season supercross. It’s been around for over 30 years and nearly every top rider has raced it until recently, when the Baker’s Factory types (sans Marvin Musquin) have skipped. It’s still a big deal, though. It runs Saturday and Sunday, and lives by the tag line “100 percent supercross, 100 percent freestyle, 200 percent show!”

You know what? Lille-Bercy lives up to that level of hype. The race does a good job getting the riders out there for the fans as much as possible, with match races, a superpole qualifying lap session, and then main events. The track has gotten bigger with the move to Lille, and it always does a good job challenging the American-tuned SX racers while still being raceable for GP riders who don’t race indoors as often. The opening ceremonies are legendary, but it seems like the craziest stuff happened back in the RJ/Wardy/Stanton/Bayle days. Bercy is part tradition and part what’s happening right now. It’s pretty cool.

The AUS-X Open is only in its second year but brings in huge names. I have no idea where they got the funds to pay the start money demands for Ryan Villopoto, Chad Reed, and Cooper Webb, but the bikes are shipped and the riders are on the way, so it appears the checks will clear. The star power gives this race an instant spot on the map. It takes place on Saturday and Sunday and features standard main events on each night. The AUS-X Open will also feature a Best Trick event, as well as a special Australia vs. USA race. Australia will field Chad Reed, Dan Reardon, Dean Ferris, Hayden Mellross, and Jackson Richardson, while team USA will consist of Ryan Villopoto, Cooper Webb, Justin Brayton, Gavin Faith, and Justin Hoeft. There’s also a Lites class at both Lille and AUS-X, but these races are really billed for the star power at the top. So … here’s a rundown.

In addition, AUS-X is the final round of the Australian Supercross Championship (which Brayton and Hahn are competing in) so it will also feature top Aussies like Dean Ferris and Dan Reardon (go here for the latest SX standings from over there).

Bercy-Lille has always packed plenty of top European-based riders. This year includes Febvre, the French native and 2015 MXGP World Champion, as well as Tommy Searle, Jordi Tixier, and more. Here’s the full list of what the French call pilotes. You’ll see this is kind of a who’s who of, “Dudes whose names you saw in the Anaheim results one time and had no clue who they were.”

Now, let’s look at the Lites classes. Australia’s 250 division features some names you know, like current AMSOIL Arenacross Champion Gavin Faith (who is practically a fixture running up front Down Under) as well as Aussies Hayden Mellross and Jackson Richardson, who are top-10 250SX dudes in the U.S.

Bercy-Lille features a round of the French SX2 Championship, featuring future members of the “Dudes whose names you saw in the Anaheim results one time and had no clue who they were” list. Also, there are three wildcards listed: Ryan Surratt, who will be racing in Europe for part of 2017, loveable amateur standout Jake Masterpool, and Brian Hsu, former factory Suzuki rider and owner of one of the strangest last names ever. The FIM’s Wolfgang Srb must be proud.

It’s key to realize these races are really just there for fun. The big names make their cash through start money as opposed to purse, so there’s no reason to win or die trying. Of course, racers will race hard anyway, but don’t be shocked if one of the big names is just off the pace, takes fifth place and still goes home happy. Being slow at Anaheim is cause for freaking out, but a bad weekend in France is still a good weekend (when you’re getting paid). Also, do not use these races as a bellwether for what’s to come in 2017. Every rider is in a different level of preparation when they come to these races, and also, some riders excel on foreign turf more than others. Brayton is probably the best example—he’s a former King of Bercy and has been lighting it up Down Under this year. Brayton is really good at one-off races on tighter tracks. He could win the AUS-X Open over Webb, Reed, and Villopoto and it wouldn’t be a shock.

But, wait. Villopoto is racing? Indeed. No one has any idea how RV will do, including him. A few weeks ago we ran an interview with him and he said, “I’m not going down there to win. If I can race with the guys for a couple laps and be inside the top-five, I’d be happy with that. I mean I haven’t raced in two years. Anybody out there that has any expectations of me coming out there and winning, they must be smoking something strong.”

Well, we’ve seen some of these videos of him riding again and he looks the same on the bike as he always did. RV was the reigning Monster Energy Supercross Champion just two years ago—no doubt he can still go very, very fast. Endurance? Willingness? Hard to say where he is in those categories, and that’s what makes this so interesting.

Reed and Webb put on a great battle last year in Sydney, so that should be good again, especially now that they’re teammates.

Over in Europe, Barcia’s appearance will mark the first race with a JGR Suzuki, but don’t get too pumped up because this bike is far from the one Barcia will have at Anaheim. It’s early in the process for the JGR boys right now after a late switch. But Barcia always bring the chance of some Bam Bamming and controversy—one time he practically had to be escorted off the track he made the French fans so mad. Yet he’s come back several times since. The promoters here know what they’re doing. When you’re aiming for 200 percent show, it’s good to have some fireworks.