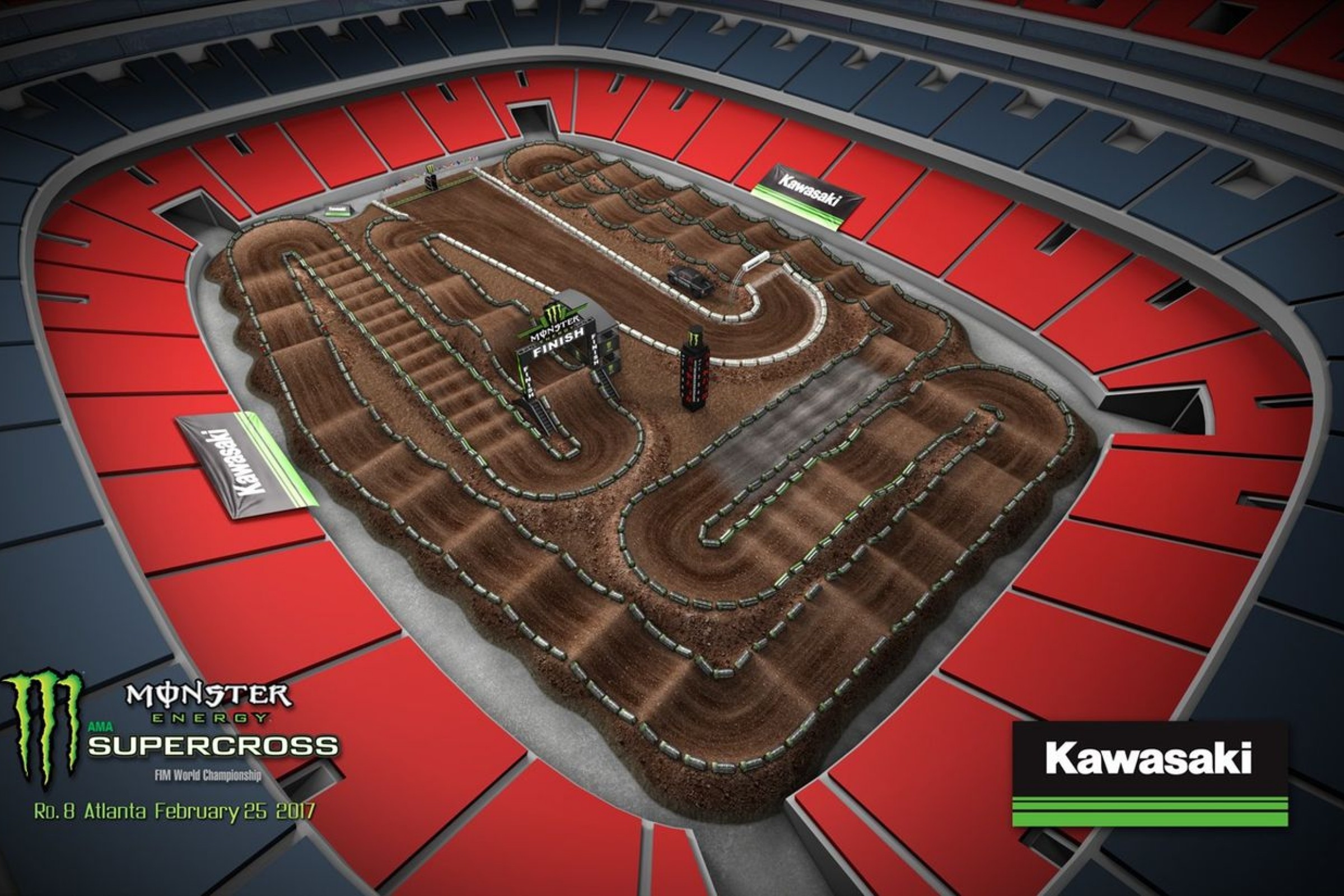 Last week, Feld Motor Sports released 16 of the 17 (Daytona is not a Feld event) track maps for the 2017 Monster Energy Supercross season. (You can view them here.)

We wanted to give our readers a chance to ask our resident supercross expert, Jason Thomas, anything they had on their mind. Below are some of the questions we received with JT’s answers.

I think San Diego will be the most technical track of the season. There are several long rhythm sections, which make big combinations possible as well as create options. Add a long set of whoops—which are typically tough in San Diego—and you have a track that is challenging both mentally and physically.

For passing, I like the football stadiums because there are more 180-degree turns. They open the door for block passing and inside/outside options. Further, I also think the tackier tracks help with passing because it makes inside lines viable. On the West Coast, the dirt is typically too hard and slippery to use a flat inside line. Dallas can be hard and slick, but being held in February this season, I think it will offer more traction than it has in the past. Dallas only has a couple 90-degree turns so I like its layout for passing.

Whichever track ends up being your best result of the season is always the most fun.

Colton361: JT, This obviously depends on the nature of how the track builders construct the track on race day, but do you foresee longer lap times in 2017? Or will we continue to see more sub 50 second tracks? Thanks

Yes, I actually do see some longer lap times in 2017. The track layouts are very busy with more jumps and whoops than in years past. There are long rhythm sections, which will slow riders down, and there are several tracks with two whoops sections, which always add seconds to the laps. This is a good change.

On The Box: JT - It looks like 14 of the 17 tracks have a tight corner just before the finish line. Can't the track builders have a little bit of an imagination and have a big sweeper, a long set of whoops, or something that allows for better racing to the line like Daytona had the year Weston [Peick] had to pin it and send it to win? I think it would add some excitement at the end of a race which is usually a yawner as it draws to an end. Just my opinion.

There are probably some logistical reasons at times for how the finish line has to be laid out. Its tough to build a long section then have the finish line at the end because it takes up so much floor space. Personally, I like bowl berms before the finish because we get to see some serious bar banging. Daytona is much different than the rest of the series in how the track is planned. The endless straightaways create some great high-speed action, but we just don’t have that luxury inside a stadium. As long as the final turns are open enough to allow for a pass, I don’t mind the current setup.

MathewV21688: JT, Which of these tracks look start-dependent to you? IMO, Anaheim 2, Indianapolis, and Toronto look like start-dependent tracks to me. And secondly, would it be possible if you sent in a track design to Dirt Wurx like how some guys did in '08 and '09?

I am going to go with Minneapolis. There are too many 90-degree turns and the 180s are accompanied with very short straights before and after. Passing requires long straights to pull alongside and berms to block pass or pivot off of. It’s impossible to know with full confidence how a track will play out from a graphic, but those are some strong indicators.

As for the ’08 and ’09 tracks, I liked the idea of getting rider influence. Some of the coolest tracks were inspired by the riders that year. I don’t think I am the right person to do something like that, but having new ideas and a different perspective is always a plus.

hamncheeze: JT, would you like to see the addition of big bowl berms and safety nets? :) :)

Big bowl berms are essential if we want the block passing and excitement of yesteryear. Safety nets might not be the final answer, but I think a solution can be found if everyone sits down and works out the details. In today’s world of litigation, keeping fans protected will be the first priority as it should be. Finding a way to improve the racing and also ensure fan safety has to be possible, though.

BD25: JT ... Which track layouts do riders prefer.. football stadium or baseball stadium.. and which do you think gives fans he best racing..

Most riders that I have talked to typically prefer the football stadiums. I am sure that someone prefers the baseball style, but I don’t really know why they would. The baseball stadiums usually mean long sweeping turns around the stadium edges, which makes passing unlikely. Shorter straightaways also lessen the chances of getting alongside another rider.

Big Dos: JT, We are seeing quite a few tracks with double apex corners for the '17 season. How do you think these will play out in terms of the importance of gate pick, likelihood of crashes etc.

I am a fan of these types of first corners because it allows for a few different scenarios. The riders on the outside have a chance to run it in deep and power around the outside, then race the pack to the outside of the next straight. The riders who are on the very inside can brake early if they get a bad jump from the line, then hug the inside all the way around and try to shave off several feet of the racetrack at a slower speed. They will then be on the opposite side of those riders who left their throttles on longer, allowing for both to come out even on the next straightaway.

In 60-90 degree first turns like Seattle, the outside guys usually end up in the Tuff Blox if they push deep, and the inside guys get squeezed to the left, leaving no room.

Carlos Quezada: JT, would you rather like to see the over under used the way they did back in 2000 - 2011 when it had a leap before or this version which is just kind of a wall?

I didn’t mind the over/under jumps back then, but they were a bit dangerous at times. The downsides are always very steep because of how the dirt is laid and there’s typically a sharp edge at the top. I have seen some horrific crashes from riders clipping the top and subsequently missing the downside from the bounce. There is a 15-foot drop to the bottom and if the rider bounces sideways or endo’s off of the top, it’s an ugly scene on impact.

Metta: JT $.... 1.Do these track maps mean anything to the riders in regards to preparing for individual events? In other words; are there any obstacles, sand sections, or rhythm sections, etc, that they may want to pin-point and work on during the week prior? 2. Are there still some track obstacles that scare even the top dudes?

Most riders will copy at least one of the track maps for their personal tracks at home. That race is always fun because the first lap of practice feels so familiar. Riders will usually do better and feel more comfortable all day at that particular event because of the thousands of laps they have done on that layout already. Besides that, riders usually look over the next week’s map and will spend some extra time on any irregularities they may see on the map. If there are a lot of table-to-table sections, maybe the rider will spend an hour just working on their speed and comfort level on that obstacle. Practicing certain nuances that may pop up on a certain weekend is pretty common.

As for scaring the top guys, there are always sections that increase blood pressure. The bikes are so good nowadays that it seems like anything is jumpable. The scariest thing is when a rider jumps something that wasn’t designed to be jumped, forcing the hand of everyone else. James Stewart used to put this sort of pressure on Chad Reed and Ricky Carmichael quite a bit.

yofiffy: For the large triple jumps, do the pros ever even use the middle bump and double? Why not just save the dirt and have them be large doubles?

The only time the top guys use that middle jump is on the first lap of practice and the first lap of a race if they get a poor start. I do think there needs to be something there for the first lap of racing. Having a safe option as a last resort when the pack bunches up or someone makes a mistake is important. If riders had to roll that first jump it would be a nightmare, and jumping onto flat ground ... well that just sucks.