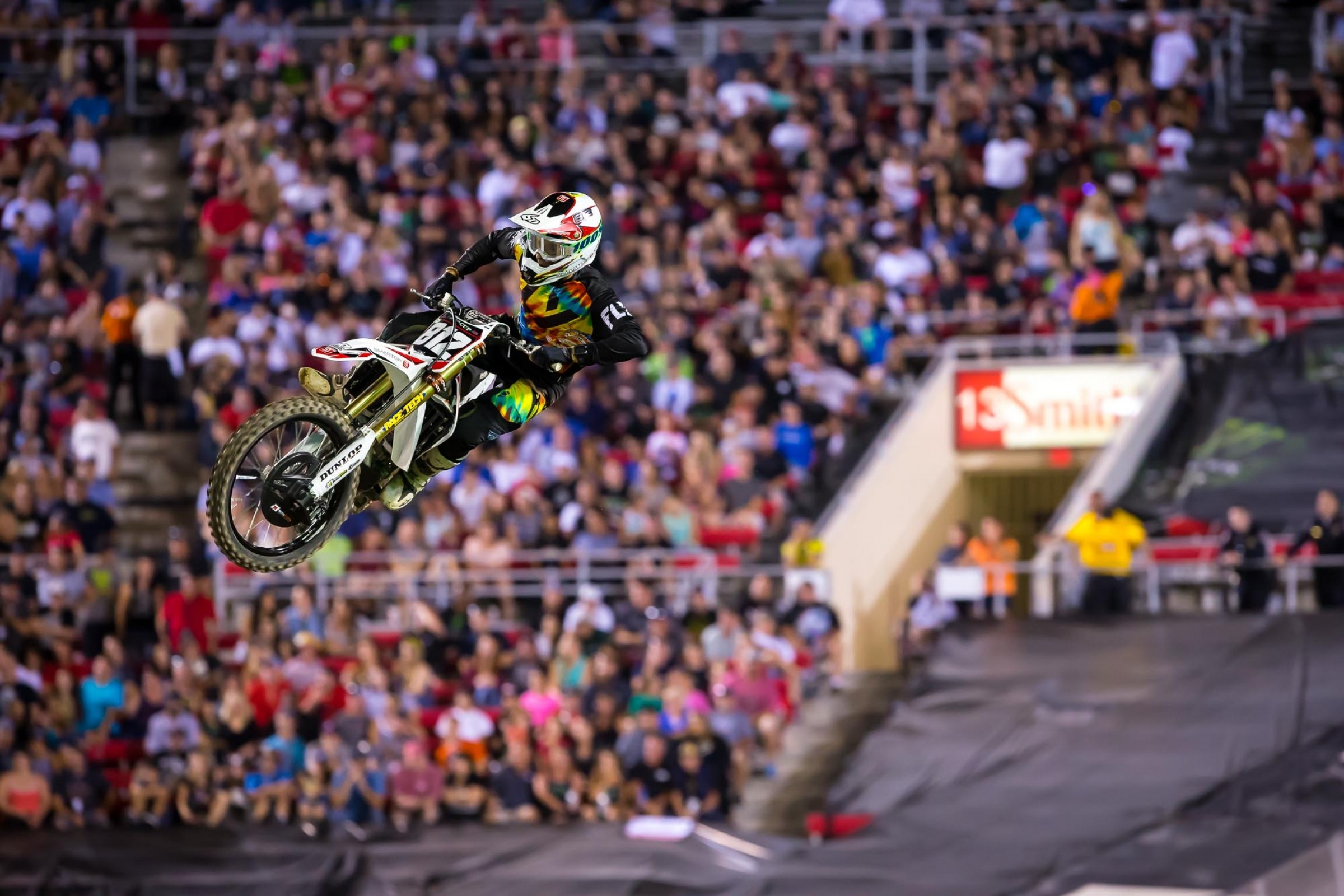 These dudes aren’t 21, but they hit the jackpot big time in Las Vegas. Cameron McAdoo continues his rags to riches tale in the amateur ranks, which started when the SmarTop/MotoConcepts team picked him up before the Ricky Carmichael Amateur Supercross at Daytona, Florida. He was fast there, fast again at Loretta’s, and then rode wild 7-1 scores to the Monster Energy Cup Amateur All-Stars win on Saturday night. He also bagged a brand-new Toyota truck—that’s huge for an amateur who hasn’t been enjoying factory paychecks!

In Supermini, Stilez Robertson didn’t have the week he wanted at the Rocky Mountain ATV/MC Amateur National at Loretta Lynn’s, but this Supermini win served as a huge rebound. First—race winner Seth Hammaker crashed in race two while battling for the lead, then Robertson held off a charge by Carson Mumford to get the overall.

We talked to the two ecstatic riders after the race.

Racer X: Pretty big night for you. You pulled a couple holeshots and got yourself a brand new Toyota Tacoma! Did you come into this thing practicing starts? Did you have that truck on the brain?
Cameron McAdoo: Oh yeah. When we found out about it at Loretta’s I was like, What are we going to do to win this? Tony Alessi set up some expanded metal down a hill for us and we practiced on it a good amount. I was confident coming in and I knew we had a fast bike, but it was tough to prepare. I’ve never done anything like that.

This has to be a big win for you. Look at the pedigree of the class, the guys who have won before: Aaron Plessinger, Austin Forkner, and more. Those guys are now winning Nationals and supercross main events. What’s this going to do for your career?
I think it’s a great starting point for my pro career. I didn’t have a lot of experience in supercross before this but I feel good and I think it’s going to be pretty good for me.

We heard 250 East Region for you next year?
That’s the plan.

How much pressure were you feeling on the second moto start?
I knew I got the first start and the truck was on the line, but I just tried chillin’ out and was just like, Let’s do this. I’ve done starts thousands of times. There was pressure, but coming down the start straight I was like, I think I got this!

When you crossed the finish line did you know you had the overall? 7-1 is kind of an odd score to take a win.
You know, the first moto I got the holeshot but there was that rhythm lane right next to the stands and the first couple laps I got the double in and three-three-three pretty easily but after that I was struggling through there and I ended up going down. Second moto I was out front and I saw Mitchell [Falk] rolling off the side of the track, and he won the first race so I was like, Okay. I saw a couple guys behind me in second and third who I knew weren’t up front in the first moto, but I wasn’t really sure. I was just so pumped to get the win, and especially the truck.

How much of an upgrade is the Tacoma from the vehicle you drive now?
Actually I used to drive a van but the transmission just went out on it! I have a $1400 Ford Escape back home I drive around because it gets good gas mileage and I’m on a budget.

Racer X: You and Carson Mumford had one of the best battles of the night. You were back and forth and the crowd was on their feet cheering. What did that feel like?
Stilez Robertson: The whole stadium was going nuts, it was cool! You see everybody standing up yelling, and the start was unreal, I loved it. I knew I had a couple places where I was faster than Carson, and I knew I needed to get around him. After that I was just able to ride my own race. He got pretty close one time but I pulled away a little bit and got the checkered flag.

You’ve won a lot of amateur championships in your career and you’re now the Monster Energy Cup Supermini champion. What does this mean for you?
I don’t know, it feels like a dream. It’s really cool and I think it’s a good stepping-stone for supercross. I think it should help a lot, hopefully.

How much training did you do on legitimate supercross tracks before tonight?
I think I started training five-weeks ago. I was at Kawasaki’s test track in the hills, the PC track, and Milestone, training with Jay Whipple. About halfway through we switched to Showa—Pro Circuit and got some sweet A-Kit stuff from Showa. I think I’ve been on that for two weeks now.

After that first main event, the look on your face wasn’t happy. Were you glad the format here was two races?
Yeah. The first main event didn’t go my way, but it was my fault for leaving the door open for Seth [Hammaker]. Second moto I was like, I gotta win! My start was decent and I knew Seth was in third and all of a sudden I heard the crowd gasp and then all I heard was Carson’s bike. I was like, Oohhh, Seth crashed. I just tried to focus on my lines and jumping into the sand every lap, it was super fun.

How do you prepare for such a massive drop-in off the start?
We got some expanded metal and I did 10 starts on it and they were all good so we were like, All right, I don’t need to do anymore, we’re solid. I didn’t do any elevated starts this year. I did some last year, but this year the drop wasn’t as bad as last year. It was tamer, just farther down. I really liked it, it separated quite a bit in our class. It was something fun, something different, and I really like the expanded metal. It’s more consistent, that’s for sure.

You’ve been to a lot of races in your career, but what was it like racing in front of this many fans?
It was pretty crazy to race in front of … I don’t even know how many fans. It was pretty crazy just to sit up on the gate above everyone. When we were up there they started the wave and the whole Supermini class put their hands up too, just messing around. That was pretty unreal to see everyone from up there.

What was the most difficult part of the track for you?
The sand section, it kicked my butt. In the first practice I was like, I gotta hit it, but I didn’t. Then I finally did it, and the first time I did it I crashed! I came back to the truck and Bones [Pro Circuit’s Jim Bacon] was like, You gotta do it Stilez, you gotta do it. So I did it like twice in the next practice but missed it the first couple laps in the first main. Bones comes back and he’s like, Dude, what are you doing? So I said, All right, all right, and I jumped it every lap in the next main. Bones was like, I told you if you jump it you’d win!