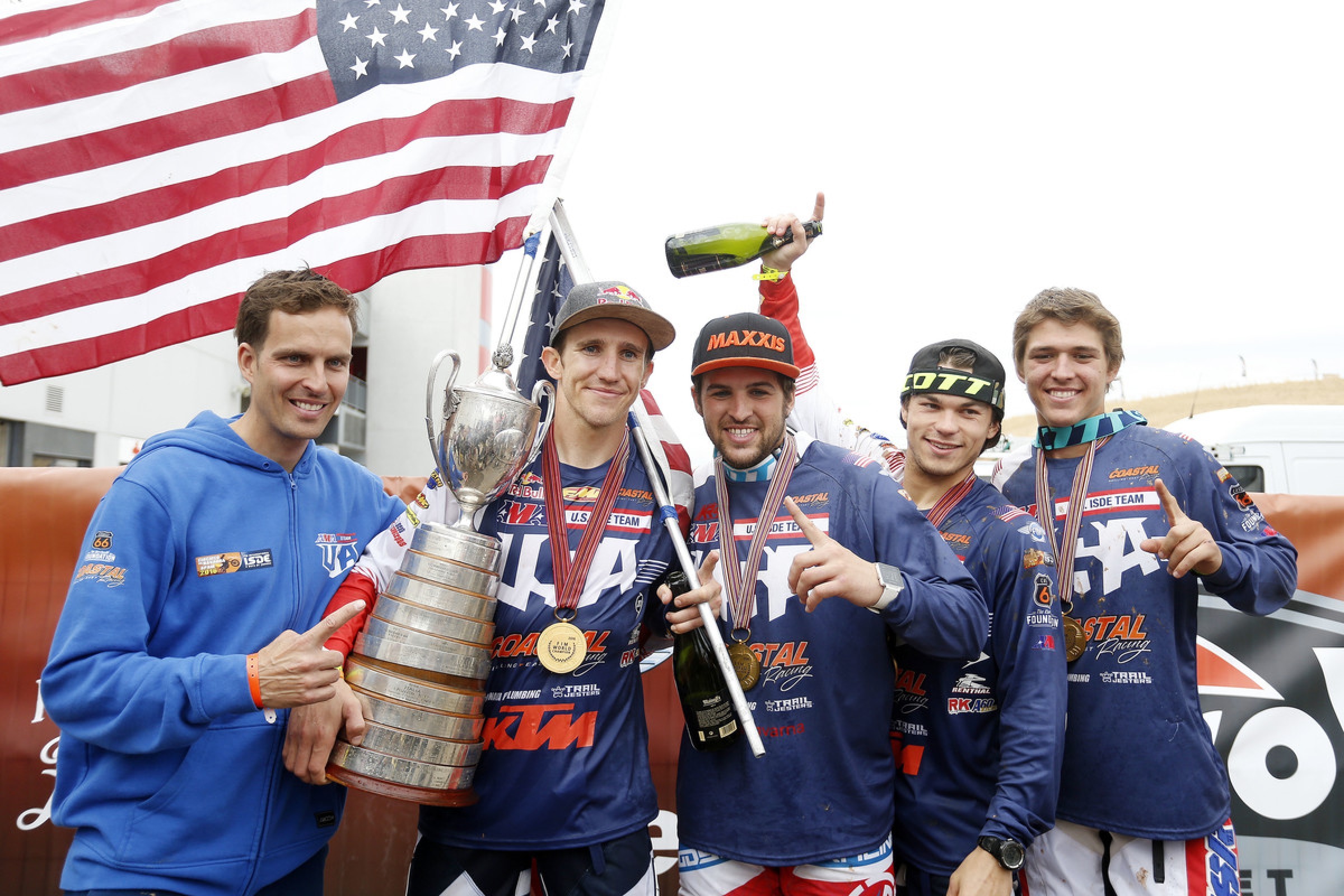 The International Six-Days Enduro (ISDE) is a team race for off-road racing. For 90 years, Team USA never won it, and was rarely a contender. Meanwhile in the team race for motocross (the Motocross of Nations), Team USA started winning in 1981 and has since won a record 22 times. It’s a strange parallel, an outright record number of successes in one and zero in another.

On the surface, the reason was obvious. The ISDE runs a completely different racing format than U.S. races. It’s not the GNCC des Nations. But even still, the U.S. has produced good off-road riders, so it seems like at some point things would have come together.

But talent alone wasn’t getting it done. I remember back in 2003, when I was working next door to Racer X in the GNCC offices, and the crew decided to “fix” the ISDE problem. It costs a ton of money to compete in this race, and U.S. riders were often going over and footing the bill themselves out of pride. That year the GNCC series grabbed a bunch of sponsors to support the effort, and then footed the leftover part of the tab itself. The funding ensured the very best American off-road riders would compete and have the proper support. A dream team was assembled, with Rodney Smith (GNCC Champ), Barry Hawk (GNCC Champ), Mike Kiedrowski (four-time AMA National MX Champion and WORCS Champion), Mike Lafferty (National Enduro Champion), Fred Andrews (GNCC and National Hare Scramble Champion), Jason Raines (National Hare Scramble Champion), and Ty Davis (125 SX Champ and National Enduro Champion). With that kind of talent, and the right funding, Team USA was finally going to battle for the win, right?

Nope. They got whooped pretty badly. Hawk’s bike blew up about two miles into the race, ending the team’s hopes. In reality, the team wasn’t fast enough to fight for the win anyway. Meanwhile, you know who did win the ISDE overall that year? Stefan freaking Everts! It was a sand race and Everts was on top of his game that year. The Americans didn’t have a chance.

But there was one lone bright spot. A young rider named Kurt Caselli, riding for the U.S. Junior team, went really fast. He was actually good at this ISDE thing.

Caselli and his dad, Rich, caught the ISDE bug and started to arrange, lead, and organize the U.S. effort. By 2006, Kurt was on the World Trophy Team and contending for the overall individual win, which was rare air for a U.S. rider. (I know Rodney Smith battled for it once, maybe a few others, but the list is short.) As Kurt got better, he convinced other U.S. riders they could get it done too, and by the turn of the decade, several yanks were running up front. Now the team had the speed to contend, but the Europeans had experience in other aspects that kept them out front. As Zach Osborne, who rode for the team a few times, said, “Those guys know how to cheat better than us.” When you’re racing in the woods and desert for hours a day, for a week, strange stuff happens.

Another step in organization was needed, and FMF KTM factory off-road team manager, Antti Kallonen, handled that by taking over team management duties. Now the Americans were flush with desire, confidence, and the right organization. With the World Team Trophy now in sight, motivation was easy. Last year could have been the year until Kailub Russell crashed out while battling for the lead, but Ryan Sipes’ individual overall win, the first-ever for a U.S. rider, spoke volumes: the U.S. was now fast enough.

Honestly, watching from afar it doesn’t even seem like there was much drama this year in Spain. The U.S. took the lead early and held it the entire way. The whole team was so good that even losing Sipes didn’t matter. Layne Michael flew in as Sipes’ last-minute injury replacement, he had virtually no ISDE experience, and he held his own. The U.S. effort and U.S. off-road scene is strong enough to where you can plug someone else in and still contend. Meanwhile Taylor Robert, in many ways the modern-day Kurt Caselli due to his versatility, took the individual overall win. This time, along with teammates Michael, Russell, and Thad DuVall, it was enough to finally capture the team trophy.

"This enormous accomplishment is historic and without question one of American motorcycling's greatest competitive triumphs," said AMA President and CEO Rob Dingman. "On behalf of all AMA members, I congratulate the U.S. World Trophy Team, its support crew, sponsors and everyone who contributed to this exceptional performance."

“It was a stressful last few days—this is a huge deal for me and for the USA,” said Robert in a KTM statement. “I kept trying to tell myself that everything would work out but I know anything can happen during the final motos. This is my sixth ISDE and it feels so good to have won with the USA team and to also get the overall individual result. The team has been great, we’ve been getting closer and closer to this year-on-year. This one is for Kurt Caselli.”

Indeed. Kurt was lost in a crash at the Baja 1000 a few years ago. But his legacy lives on through the leadership he showed with this team. He planted the belief that Team USA could win, and now we’ve seen the fruits of his labor.

“It was very challenging mentally to not go after test-wins every time but we understood the ultimate goal, which was to bring home the team victory,” said Russell. “I can remember when I was scared to death of the ISDE and now I’m part of the first winning USA team and it’s a good feeling. I wish our good friend Kurt was here to share such an amazing feat.”

You’ve got to imagine he was looking down and watching the whole thing. Cheers to Kurt, cheers to Taylor, Kailub, Layne, Ryan, and Thad. Cheers to Team USA, finally, the ISDE World Champions.