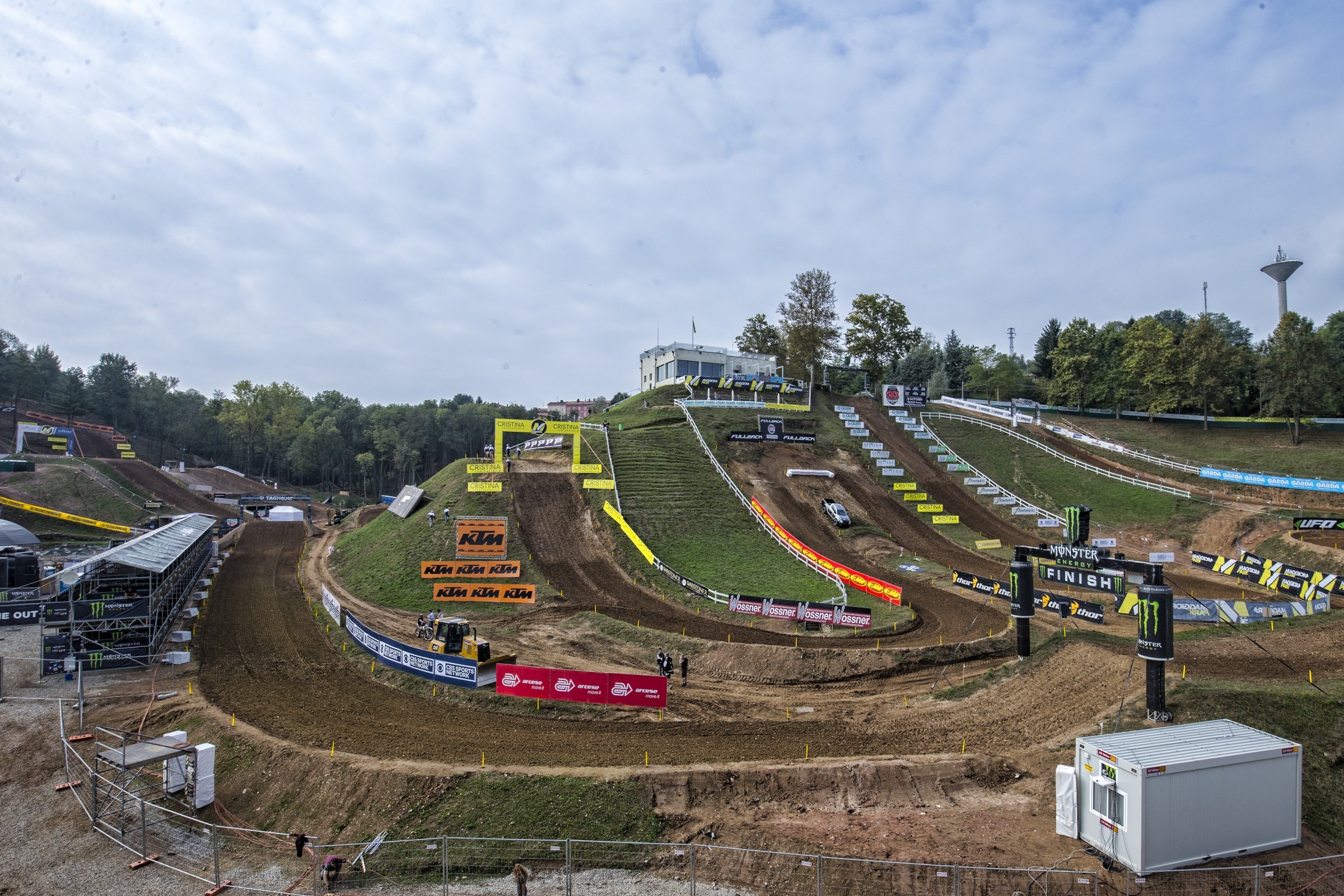 Welcome to the Motorcycle-Superstore.com Race Day Feed for qualifying from the 70th Annual FIM Motocross of Nations in Maggiora, Italy. Today will feature three qualifying races to determine gate picks for tomorrow’s racing. Action kicks off live on MXGP-TV.com at 7:20 EST.

Below is the full schedule for today. Stay tuned as we’ll have coverage right after each qualifying race.

The Open qualifying race belonged to The Netherlands’ Jeffrey Herlings. In his 450 debut, the three-time MX2 champion shredded the Open Class to the tune of a more than 18 second win in the final qualifying race of the day.

It was Herlings to the front out of the gate, as he took the holeshot ahead of France’s Gautier Paulin and Australia’s Dean Ferris. Team USA’s day went from bad to worse in the final race, as Jason Anderson went down in the first turn and was 34th early. Arnaud Tonus, who needed a big ride to save Switzerland from the B-Final, was top five early in the race.

With Herlings sprinting away, the battle for second between Paulin, Ferris and Tonus tightened up late in the race. Ferris, the former GP regular, looked right at home battling Paulin and closed to within a second of second place, while trying to fend off Tonus, who was applying heavy pressure. Paulin would open a gap in the final stages, outlasting Ferris by nearly three seconds at checkers. Tonus couldn’t find an opening and finished under a second behind Ferris.

Anderson clawed back to 14th, which may have saved the U.S. from the B-Final. Seriously! It would have been close. The Czech Republic took the final spot in the A-Final with 31 points. If the U.S. would have taken Webb’s (18) and Martin’s (9) scores, it would have been at 27 points, which would have put the team in 17th of 19th. Instead, they were able to drop Webb’s 18th from the first race and qualified 15th.

Two-time defending champions France took the top qualifying position behind 1-2 finishes from Romain Febvre and Gautier Paulin. Their worst score? A third from Benoit Paturel! Belgium finished one point behind in second, with The Netherlands (6), Switzerland (6), Italy (9), Great Britian (9), Spain (10), Australia (10), Sweden (18) and New Zealand (18) rounding out the top 10.

We’ll have more coverage from qualifying after the press conference.

In his first Motocross of Nations appearance, Spanish teen Jorge Prado rocketed to the holeshot in the MX2 qualifying race. The 15-year-old was followed by Alvin Ostlund of Sweden and Switzerland’s Jeremy Seewer, with Team USA’s Alex Martin around ninth.

After teammate Valentin Guillod only completed one lap in the MXGP qualifying race earlier in the day, Seewer need to deliver a big ride for the Swiss, and he did, getting around Prado early in the race to take the lead. The battle for the overall eventually became a two horse race between Seewer and Belgium’s Jeremy Van Horebeek, who dropped down to the smaller bike for the event.

Late in the race Van Horebeek was applying a ton of pressure to Seewer, but wasn’t able to make a pass stick. With four laps remaining in the race, Van Horebeek got aggressive and the two traded paint after Van Horebeek ran it in on Seewer. The Swiss rider fended him off for the time being, but later in the lap Van Horebeek finally made a pass stick and held on for the MX2 qualifying victory. Seewer finished second ahead of France’s Benoit Paturel with Prado fourth and the Netherlands’ Brian Bogers fifth.

Meanwhile, Team USA’s tough start continued in the second qualifying race of the day. Every time Alex Martin appeared to gain momentum, he’d make a mistake. On the first lap, Martin had worked to about fifth, but tipped over in a corner and dropped back to around 10th. He worked back into the top five late in the race, but again made another simple mistake and dropped outside the top 10. He eventually finished the race ninth.

After two races (of three) France (4 points) and Belgium (4 points) are tied at the top with Italy (9), The Netherlands (10) and Spain (10) rounding out the top five. Team USA is currently 13th. Each country is will drop their worst score, with the two best results being counted.

Tony Cairoli, the leader of a young Italian team, did exactly what he needed to do in the first qualifying race. The eight-time world champion had home crowd on their feet after grabbing the first holeshot of the 70th Motocross of Nations in Italy. Behind the Italian was Canada’s Kaven Benoit and France’s Romain Febvre. Team USA’s Cooper Webb was around fifth off the start.

Cairoli jumped out to a commanding lead early as Febvre was trying to find his way around Benoit. Around the 13-minute mark, Febvre finally moved into second and began to go after Cairoli’s lead. Meanwhile, things came unraveled for Benoit and Team USA.

Shortly after being passed for second, Benoit lost the front at the bottom of one of the big hills. Webb, with little room to get around, tried to go over Benoit’s bike, but lost control and went down. Team USA’s captain had trouble getting the bike started and fell to outside the top 20.

Febvre began to cut into Cairoli’s lead as the moto came to a close and then caught a huge break when Cairoli lost the front end with three laps to go. Fortunately for Cairoli he’d built a huge gap over third place Kevin Strijbos of Belgium and was able to rebound for second behind Febvre. Strijbos would finish third ahead of Great Britain’s Tommy Searle, Netherlands’ Glenn Coldenhoff, Spain’s Jose Butron and Australia’s Todd Waters. Webb came back to finish 18th. Benoit finished 10th.

In other news, Germany and Switzerland had a terrible opening moto. Max Nagl went down hard with Hungary’s Erik Hugyecz and wasn’t able to complete the race. Switzerland’s Valentin Guillod did not complete a lap. We’re not sure what went wrong. We’ll provide an update as soon as possible.

Luckily for teams like the United States, Switzerland and Germany, gates picks for tomorrow will be determined by the best two qualifying positions. Each countries worst score will be thrown out today. MX2 qualifying is up next.