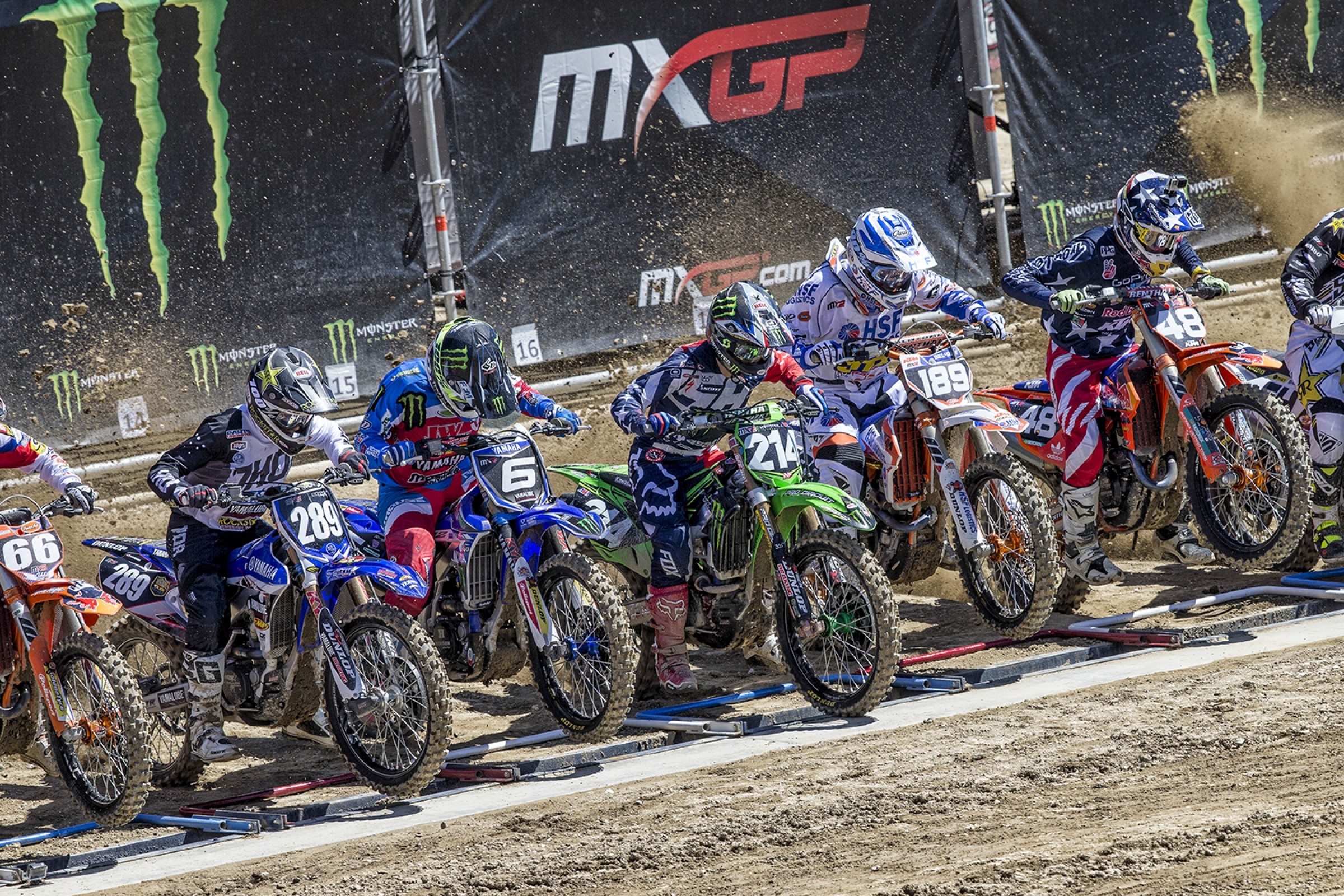 The 2016 FIM Motocross World Championship wound down on a stage that many of the MXGP and MX2 elite were relishing to tread. Glen Helen was the playhouse for the final act of the MXGP season and the second American round of the series in eight days drew the paddock to California. The San Bernardino site is unique in terms of being the only venue to host both a GP and a Lucas Oil Pro Motocross event in the same season and the MXGP crew encountered a layout that was supposedly shorter and without the controversial triple that challenged the 450MX and 250MX competitors earlier in the summer. Glen Helen offered speed, lines and some rough sections and generally received the thumbs-up from the majority even though some scorn flowed from the MX2 contingent that were unamused about the quantity of watering before their motos.

Monster Energy Kawasaki’s Eli Tomac may have rattled around Glen Helen faster than any other rider for his second MXGP victory on the bounce after a successful week moonlighting from domestic duty, but the 23-year-old still had to admit “Glen Helen is a tough racetrack; those were long thirty minute motos!” Part of his reticence over the dominant nature of his triumph was down to the sheer effort required. As at the national (starts in seventh and fourteenth on the way to a 3-3 scorecard even though he was fastest in qualifying) Tomac had to find a path through the pack but rarely looked as though he’d face much trouble in reaching the front due to a superiority of lap-time that was routinely up to a second and a half quicker than Red Bull KTM’s Tony Cairoli and Rockstar Energy IceOne Husqvarna’s Max Nagl. New world champion, Honda Gariboldi’s Tim Gajser, joined the troupe in the second moto and the Slovenian’s third place in that sprint was enough to edge Nagl from the lowest step of the box (meaning Gajser posted sixteen podium appearances from eighteen in his rookie campaign).

As at the Charlotte Motor Speedway Tomac faced little in the way of opposition among a group of riders with differing levels of intensity; some at the tail end of a long GP campaign that started in February and after almost two weeks overseas and with little in the way of championship rankings to be decided. Tomac himself was filling his obligation to put on an exhibition to the best of his capabilities and some important set-up changes to the suspension and shock of the works KX450F were key to embedding his speed on Sunday after an indifferent set of sessions on Saturday. Monster Energy Yamaha’s Romain Febvre grabbed Pole Position (the 2015 world champ and Glen Helen winner from last year had clutch trouble in the first moto and crashed in the second, only taking ninth) under some relentless sunshine. Eli’s comeback prowess at least gave the crowd (non-existent on Saturday, better on Sunday and no discernible difference compared to the last three editions of the Grand Prix at the circuit) reason to get vocal. Falls affected the races of Tommy Searle, Dean Wilson and Jeremy Van Horebeek.

A top five for Gautier Paulin was a satisfactory send-off for what has been a disappointing second and final year with HRC. Sooner or later an explanation will service for how the mercurial Frenchman and vanquisher of Motocross of Nations motos can look so ordinary in red. Nations and SMX appearances beckon before Paulin is Husqvarna-bound. The Paulin-Honda link-up was fairly promising in 2015 as the 25-year-old ran to his best MXGP championship finish of second place. In 2016 it has been abject without much rhyme or reason to the cause and Paulin dropped to thirteenth in the world, counting a rib and vertebrae injury into play and forcing him to the sidelines for five rounds.

Monster Energy/Pro Circuit Kawasaki’s Arnaud Tonus made his MXGP debut in the premier class and rode to a respectable ninth overall on his maiden outing with the KX450F; very much a training and testing run ahead of the Nations and where the Swiss lines-up with a potent team including Valentin Guillod (allegedly heading for a Honda-support ride in 2017) and Suzuki’s Jeremy Seewer. The latter received his silver medal in the MX2 category, where he classified 114 points behind a rampant Red Bull KTM’s Jeffrey Herlings.

The Dutchman spoke of the lessons learned in Charlotte where he was versed in sprint lap pacing by the likes of Monster Energy/Pro Circuit Kawasaki’s Austin Forkner and Yamalube/Star Racing Yamaha’s Cooper Webb. If Tomac ruled through flying speed and deft overtaking then Herlings’ double (and first overall victory in the U.S. for his 61st career win) was just as authoritative but from the front. For all of his verve Forkner could do little about the KTM man on this occasion and two crashes in the second moto—the latter a big tip-over from which he was lucky to emerge uninjured—dispelled any chances of a consecutive podium celebration. GEICO Honda’s Jeremy Martin was very complimentary to Herlings and Grand Prix in general, even if his timekeeping was a little off having missed Sunday morning warm-up due to a schedule misreading. The two-time 250MX champion went 2-2 on the CRF250R and further refined his initial base setting after a matter of days on the bike.

With Forkner crashing, coming all the way back to eleventh in what was an extremely watchable and enjoyable trawl, and then falling again, Mitchell Harrison’s 5-5 was good enough for the last step of the box and ahead of Max Anstie who finally bagged two excellent starts but simply could not hold his speed in the lead. The Star Racing Yamaha representative was a little overawed by the result and admitted a top five had been his initial target. Rockstar Energy Husqvarna’s Thomas Covington must be feeling disappointed not to have been in contention for the champagne after a decent run to fourth in the first moto. A disastrous opening lap of the second outing left the GP-based American rooted towards the rear of the pack and he worked back to fourteenth. Bud Racing Kawasaki’s Darian Sanayei, another GP-based American, also cursed mistakes to be fourteenth overall.

Seewer was fifth and is the sole rider in MX2 with the distinction of scoring points in each and every one of the thirty-six outings this season. He headed Kemea Yamaha’s Benoit Paturel; the Frenchman disposing Anstie of a second consecutive top three championship finish and gaining some immense emotional satisfaction in just his second year of Grand Prix and after a painful recent family bereavement.

Now begins the countdown to the 70th Motocross of Nations at Maggiora in Italy and thirty years on from the iconic American victory of ’86 at the same site.