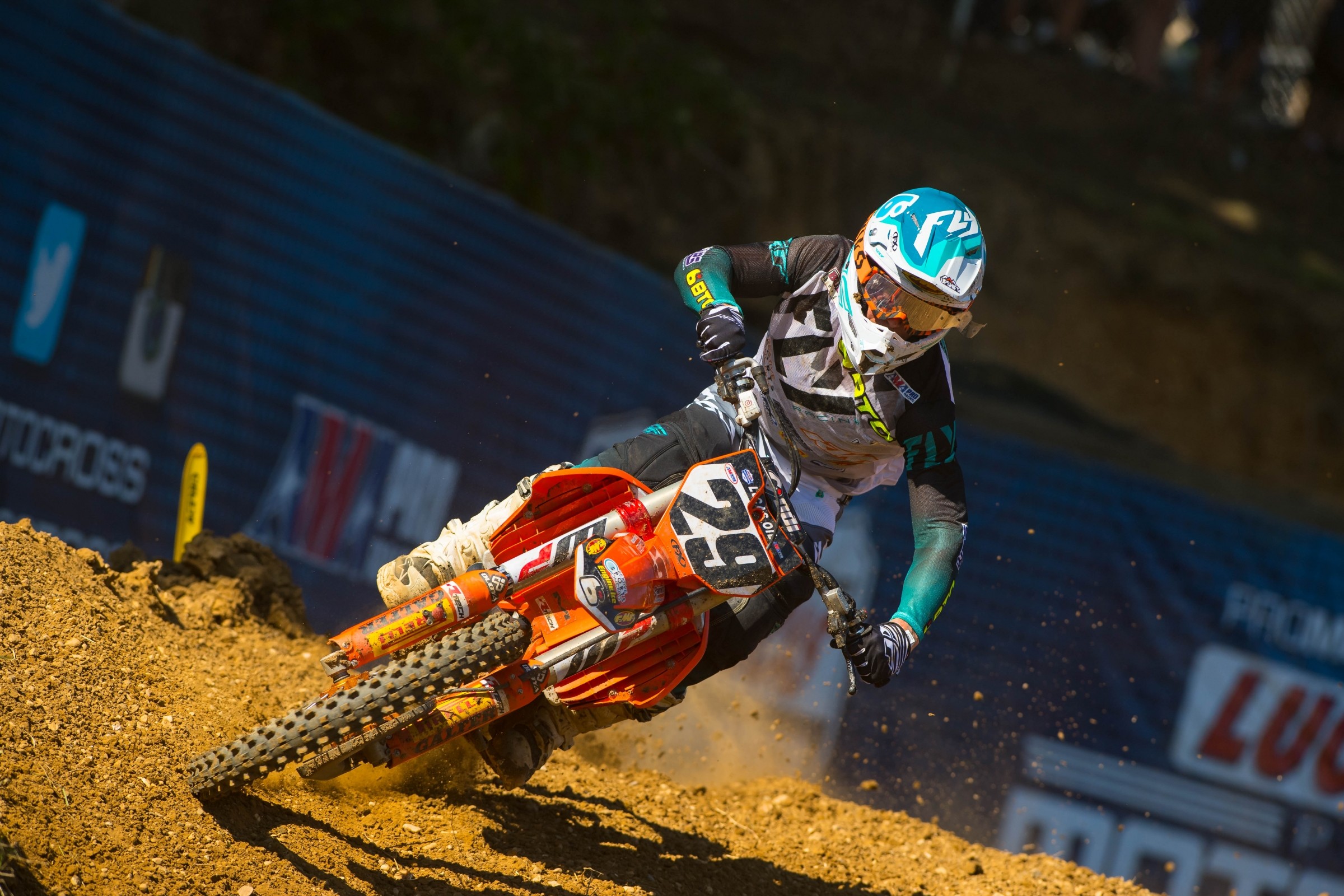 By aaron hansel and chase stallo

Riding in front of friends and family boosts many rider’s results, but for racers like Aaron Plessinger it really seems to make an extraordinary difference. In fact, Plessinger’s only two career wins have taken place in the two races closest to his local fans! The Ohio native won the Indianapolis Supercross earlier this year, as well as the Ironman National last season. Expect Plessinger to end up on the podium this weekend in front of his hometown crew. –Aaron Hansel

If someone would have told you ten years ago that Zach Osborne was going to win a National at some point you probably would have shrugged your shoulders and said, “Yeah, everybody knows that.” Well, a decade, several teams, and a European excursion later, Osborne finally broke through for that win at Budds Creek with a 4-1. It couldn’t have come at a better time either—Osborne badly needed some good news after suffering four mechanical DNFs in three weekends. We’ll see if he can get another win on Saturday. –Hansel

Ken Roczen wrapped up his second 450MX National Championship last week at Budds Creek. You might think clinching the title would be cause for Roczen to cruise and take it easy in Indiana, but he didn’t even do that at Budds Creek when the championship was on the line! Look for the champ to finish out the season this Saturday as strong as he started it at Hangtown. –Hansel

When Adam Cianciarulo crosses the finish line on Saturday it’ll mark the first time the Monster Energy/Pro Circuit Kawasaki rider has made it through an entire pro season healthy. That’s crazy to think, but it’s true. Thanks to multiple shoulder injuries, a broken wrist and a bout with salmonella, Cianciarulo has raced just 32 of 77 scheduled races (or 41.5 percent) in his SX and MX career. Cianciarulo’s results have improved steadily this season, and he even nearly won a moto last week at Budds Creek. After all the time off, it appears AC is finally inching back toward the fitness needed to go a win. Maybe we’ll see a Cianciarulo to walk away with an overdue moto win this weekend. –Hansel

Thanks to a badly broken collarbone, Jason Anderson hasn’t raced since going 3-3 for second overall at High Point. That will change when the Rockstar Energy Husqvarna Factory Racing rider lines up for battle at Ironman on Saturday. Usually when a rider comes back late in the season after missing so many races, the first race back is more about getting back into the swing of things than going for top shelf results. But Anderson seems like he’s allergic to not going as fast as possible at all times. Will he land on the podium? Barely squeak into the top ten? DNF after tangling with another rider? We don’t know, but none of those scenarios would be surprising! –Hansel

Whether you’re Fredrik Noren or Weston Peick fighting for the final spot in the top ten in points (see below), or a privateer trying to score your first career points, the Ironman National is your last chance to get work done in 2016. Take Noah McConahy, for example, who posted the following on Instagram:

"I’ve come within bike lengths of a top 10 this year, there's nothing I want more to go out one last round and give it all I got and get one. I've had an awesome year so far but it's time to end it strong! Thanks to all who have made it possible this year."

Expect to see plenty of these situations all day on Saturday, as guys fight to the checkered flag in an attempt to reach personal goals. -Hansel

Back in 2014, Chad Reed was locked in a battle with Fredrik Noren for tenth in points. While Reed wasn’t even aware, Noren, little known at the time, was keen on getting the spot. Noren got it (by nine points) for his best overall finish ever. “I really wanted to get that tenth spot. Tenth overall sounds a lot better than eleventh. I really wanted some proof—I got a trophy for it,” he said at the time. Noren finished tenth in points last year as well, and is almost certainly guaranteed a spot inside the top ten again this year (he trails Justin Brayton (ninth) and Broc Tickle (tenth) by five and three points. Both Brayton and Tickle will miss the race due to injury), but Noren has company if he hopes to finish a career-best ninth overall. Weston Peick is currently two points up on Noren with four motos left. Who takes the higher spot? –Chase Stallo

Top ten in 250MX will also be tightly contested. Mitchell Oldenburg (ninth) enters with a two-point lead over Arnaud Tonus (tenth) with RJ Hampshire (eleventh) looking to break into the top ten. Hampshire trails Oldenburg by thirteen and Tonus by eleven entering the weekend. Three riders enter, who will leave top ten in points? –Stallo

Thirteen points separate Benny Bloss from the idle Christophe Pourcel for fifth in 450MX points. While Bloss is almost assured to pick up the points needed to jump Pourcel (he’s averaged 27 points per round over the last three), he’ll have company in the race for fifth. Phil Nicoletti is just three points back of Bloss entering the final. Who comes out on top: the rookie or the veteran? –Stallo

One moto win, five moto podiums, twenty-nine laps led and three consecutive overall podiums—hard to say anything other than it’s been a successful season for rookie Austin Forkner. But the most important number is probably zero, as in the number of races missed by the Monster Energy/Pro Circuit rider. Forkner has gotten valuable track time this year and been damn consistent at that (his average finish this season is 6.8). Can the rookie take another moto victory this weekend? –Stallo

Back in the year 2000, when two-strokes still ruled and ‘NSYNC still topped the Billboard charts, Andrew Short made his pro debut at the Steel City National in Delmont, Pennsylvania. More than fifteen years later, Short will ride off into the sunset at the Ironman National in Crawfordsville, Indiana. This weekend will mark the last race of Short’s professional career; he announced at the beginning of the season this year would be his last. Last week Short took the holeshot in the second moto, reminding everyone of the talent he still posses. Lets hope Short can go out with a bang this weekend. –Stallo