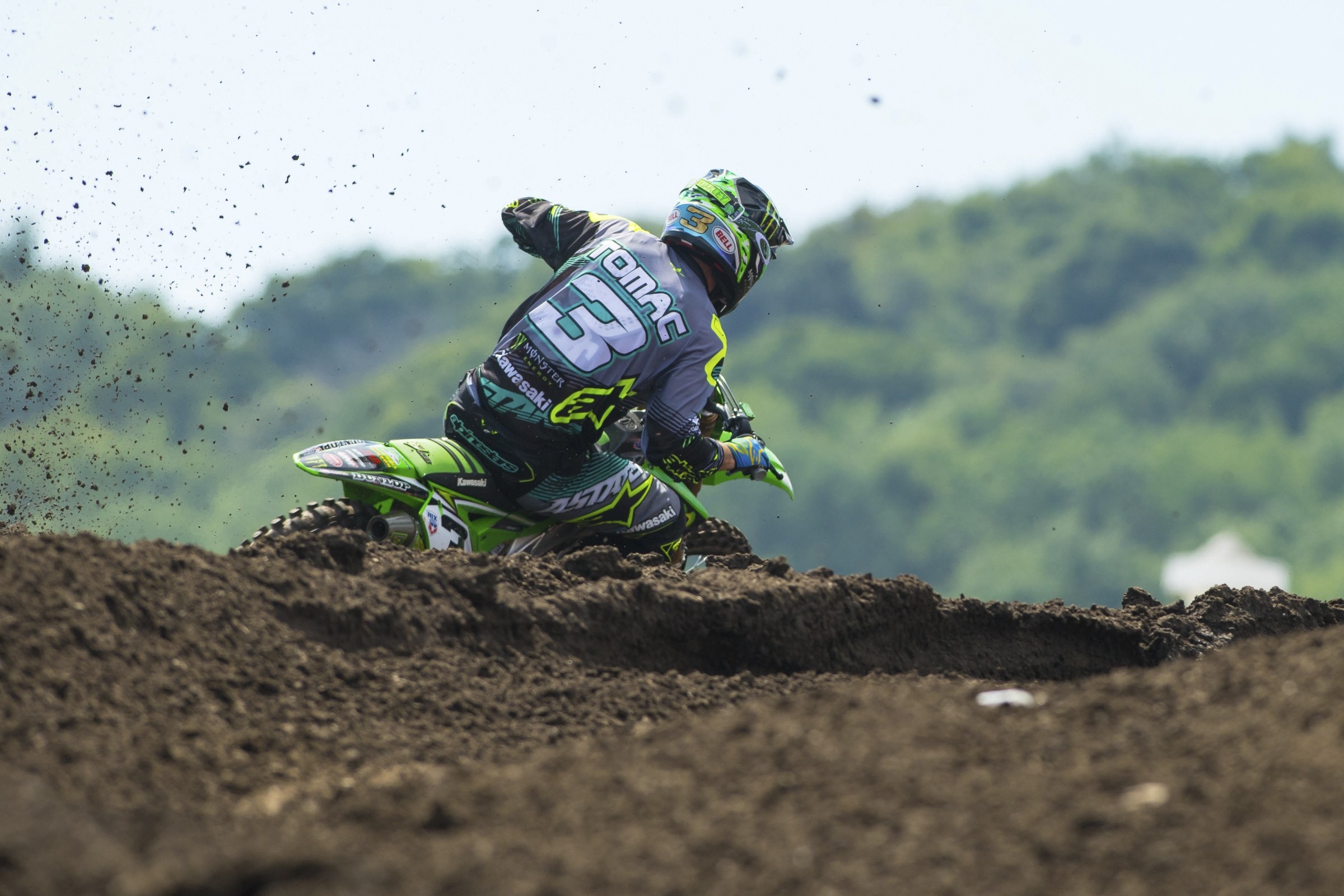 This past weekend at Unadilla, riders were faced with a rutty, treacherous racetrack. Heavy rains on Friday left the track soft and soggy for the practice sessions on Saturday morning. With all the topsoil the track crew has recently brought back in, rain creates ripe conditions for endless ruts around the course. Had this been Unadilla seven or eight years ago, the Friday rain would have caused the track to be incredibly slippery, because back then only the base hardpack was left after years of dirt deterioration.

Two thousand and twelve was the first year of the dirt reinvigoration and similarly, rain on Friday caused a rutty track for Saturday. Conditions this weekend were almost identical to that 2012 event, and having ridden that race, I can tell you that television doesn’t do justice to the true difficulty. The Unadilla track was one that required extreme precision. Some tracks are high speed and require riders to throw caution to the wind. What Unadilla just presented, though, demanded perfect technique, form and razor-like precision. The 450 results from this past weekend may seem typical, but when compared to different styles of tracks, there is evidence to my point.

At Washougal and Southwick, Eli Tomac was able to take the fight to Ken Roczen in the second moto. He unleashed his aggression and pushed the limits of the track. His strength is his intensity in conditions that allow for it. In his 250 days, it made him nearly unstoppable as 250 racing requires a frenzy level of aggression. Not many people, if any, can match Eli’s speed when conditions are favorable. He has a little more trouble, though, when the track requires finesse to go fast.

On tracks like Unadilla, where ruts run through every turn, every jump, and the length of every straightaway, blind aggression can be a limiting factor. Overriding the track will work against you. Finding the limit for what the track will allow and also re-thinking how to attack the track is paramount, and a contrast to the standard “close your eyes and hold it wide open” approach. Ken Roczen and Marvin Musquin fit this style to a tee. They are both from Europe, where track conditions are what I would consider poor at times. They grew up riding this type of track much more than Eli. They are both very technical with their style and it allows them to excel when conditions go sideways. They probably have a higher level of comfort when the entire track is one long rut.

Go look at a track like Teutschenthal in Germany and see how it shapes up. It’s eerily similar in that it requires riders to slow down a touch in order to execute the turns perfectly. The ruts are deep, rough, and aren’t always the perfect angle. Pushing too hard into turns like that will only result in the rider braking too hard, coming to a stop, and then re-accelerating. I doubt Eli grew up riding many tracks like that. American motocross prides itself on great tracks and premium conditions. There is certainly nothing wrong with that and I am grateful to have had such amazing tracks to race on in my career. For the Euros, though, they didn’t always have such great tracks to ride. I have ridden across Europe and have seen even more on television, and I know that conditions can be downright scary at times. While this may not have been ideal, it taught Kenny and Marvin lessons they were able to use on Saturday.

These two are masters at finding the perfect entry speed that will allow one continuous arc and maximum momentum through a turn. When the track has a hard limit on what it will allow, they are simply more experienced in finding it and maximizing it but never exceeding it. Kenny utilized his strengths in that second moto and was pulling multiple seconds a lap on the field. When Marvin calmed down and found his groove, he was also able to stretch his margin over Eli with this same skill set. It’s what they grew up riding and where their advantage lies.

This article may seem like it’s only highlighting where Eli has struggled, or where his liabilities may be, and that’s not my intention at all. I simply want to convey how different skill sets can make a huge difference from week to week. When the track is fast and allows for high intensity, Eli is perhaps the best in the world. He is able to push the limits past where others can or are willing to ascend to. I still claim that his second moto at Hangtown in 2015 was the fastest I have ever seen a motorcycle ridden. That was Eli hitting his stride in conditions that allowed him to unleash hell. In that same vein, Kenny simply wanted nothing to do with Eli’s pace at Washougal a few weeks ago. Eli was in his element and after years of racing him, Kenny probably knew that he would have to take big risks to go with Eli on a track that suits him. Kenny has a big points lead and fortunately was able to just move over and let Eli have his day. Flash forward to the next race at Unadilla and the situation was completely different. Kenny found conditions that favored him and he exploited the track and Eli in the process. We saw two different tracks, two different conditions, and two very different outcomes.

Kenny is precision personified; his technical perfection is perhaps the best ever. Eli aspires to overpower his way to victory. Kenny is low rpm and flows around the track like a mid-summer breeze. Eli chooses to bounce on his rev-limiter and declares thermonuclear war on the racetrack. Kenny shakes hands and shares a cup of tea with each rut and berm he encounters. Eli slams his black coffee on the table then slaps the berm’s hat off. They are as different as two approaches can be, and the results of each vary from place to place. It goes to show that there is more than one way to go fast, and being able to find that perfect form in every condition is a hard skill to master.