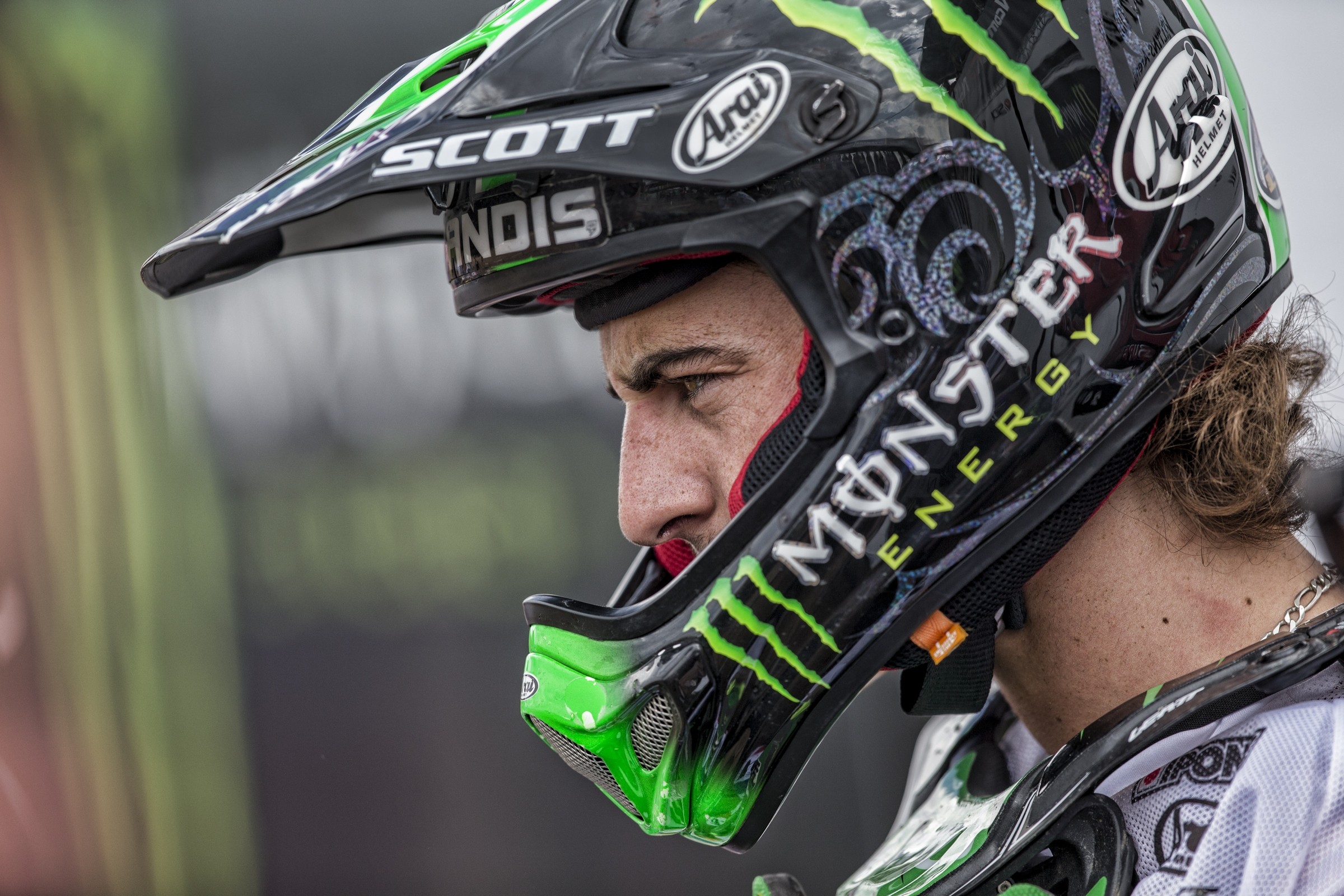 Monster Energy Kawasaki’s Dylan Ferrandis will swap green for blue and Europe for the United States in 2017 after signing a deal with Yamalube/Star Racing Yamaha earlier this year. The 22-year-old Frenchman has been itching to carve U.S. soil for a number of years but has also been enticed to try and rob Jeffrey Herlings of some MX2 superiority. Ferrandis was the only rider to beat the Dutchman in a straight-up duel in Italy earlier this year in what was one of the most thrilling motos seen in MXGP so far this term.

By winning in the Czech Republic one week before our chat he became the first rider to break Herlings’ overall streak in 2016 with the Dutchman currently convalescing over complications due to a broken collarbone. Sporting his own style and fashion (pirate facial hair, bandanas, tattoos, trips from the pits to the track on a skateboard) and a streak of individualism that sometimes borders on the rebellious, Ferrandis is the epitome of the Monster Energy athlete. He is also well mannered and reciprocal with respect and his English is at an impressive level after essentially growing up in the paddock.

We caught up with Ferrandis across the weekend of the Grand Prix of Belgium at Lommel and just five rounds of a six-year career in Europe left before heading to the U.S.

Racer X: You won the Czech Grand Prix last week and that’s your second after a maiden triumph last year in Argentina. Is it important for you to leave Grand Prix with that status as a winner? Do you think it will carry more currency in the U.S?
Dylan Ferrandis: Of course, it is always good for popularity and my career to get more wins. I would not say I was unhappy but winning when Jeffrey [Herlings] is not there doesn't feel the same. My moto win from Italy was much more intense. So I was pleased to win. I mean, it’s not my fault he became injured, I was also injured at the beginning of the season and the sport is like this. So for the image wins are important and to do it with a double in Loket was really good. Maybe the American fans watch some of the GPs and if they see I am winning then it is great for the future. For sure my plan was to be world champion before I went to the U.S. but I missed the chance with injury. I have been a contender and I have won motos and GPs. I don't think winning the title is so important for that [the U.S. move]. I have been fighting for it for a few years now and I think I had the biggest rivalry with Jeffrey and I believe that guy is one of the very best 250 riders in the world. I’m fighting with this guy every weekend and I’m sure I will find some new rivalries in the U.S. but I know what I need to do in order to think about a championship now. I think I can do something good.

How do you feel right now because you have wanted to go to the U.S. for several years but there are only five GPs left before you finish a chapter of your life?
It will be a big change and I think the biggest part is leaving behind family and friends. I know I have to be focused for the final GPs because I also have a good challenge coming up with the [Motocross of] Nations. I’m still motivated and I haven’t been thinking too much about the U.S. because the deal is signed, and plans with the house and car and other logistics are going in a good way. I just need to keep focused on the last races. The Nations also helps me to keep pushing for these GPs because it is a big event. It helps with the mentality.

It must be difficult not to think about the move because there has been a lot to organise, and you must be excited.
Yes, of course, but I went to the U.S. last winter and I saw that it is quite easy to find everything in California, especially compared to where I am in the south of France—renting a house or car is pretty difficult! All that kind of stuff is easier over there.

Where will you live and when do you leave?
I’ll be in Murrieta and I have to make the SMX Riders’ Cup for Kawasaki [Supermotocross on October 8 in Germany], which will be my last race for them but not my last in Europe because I will also come back for the Paris-Lille Supercross.

Someone like Marvin Musquin went over with Yannick Kervalla, Ken Roczen with his father, Arnaud Tonus didn't travel with anybody—what’s your plan?
My mechanic right now (Nathan) will come and be my practice and race mechanic. I’m also talking with my girlfriend about making the move. For sure some of my family will come for a couple of weeks and around the beginning of the season. Jimmy Button has been helping me in the U.S. and is a good friend of my agent Jeremy Debize. I met him last winter and we have a good feeling together. I think he will be important for me and he has a lot of contacts.

Have you been keeping on eye on the results in the U.S. with Star Racing? The Martin brothers are doing well and Webb also.
Of course! Maybe they have different stories but most of the time they have three bikes on or near the podium. That gives me a lot of confidence for the future and I’m really excited to ride that bike. When you see their competitiveness then you get the feeling you have made the right choice.

What will be the biggest challenge and what will you miss most about France and your current way of life?
The biggest challenge for sure is supercross because here in Europe it is so different and much easier. I did a supercross event in France during the little break in the GP schedule and it was pretty easy to win. Riding those tracks [in the U.S.] you need everything a lot stiffer and I noticed that when I did the Monster Cup two years ago. I am mentally ready for what lies ahead and I think I will have some time to learn. All the Americans have so many laps and experience with the tracks but I know I will have a good bike, good team and good trainer—I should be working with Gareth Swanepoel I think. What will I miss most? The family, friends and the nutrition! The baguettes! Good food, good wine. Where I live is a very good region for wine so I’ll miss that.

Bayle, Pichon, Vuillemin, Pourcel, Musquin: you are joining part of a long French story in the U.S. No pressure, but it must be nice to be in that group.
Yeah, it’s cool. We have shown that the French nation has some good supercross riders and, well, I don't want to really say it, but maybe we have big balls to leave everything we have to chase the American dream. Apart from [Ken] Roczen it seems that only French riders make the move. I know it will be a big challenge but if you want a career as a motocrosser then you need to be in America because it is the place to be. All the French riders before me were a bit special and I know I am special too—and by that perhaps I mean a big strange for some people—and I think the Americans might have a strange view of the French but I don't mind!