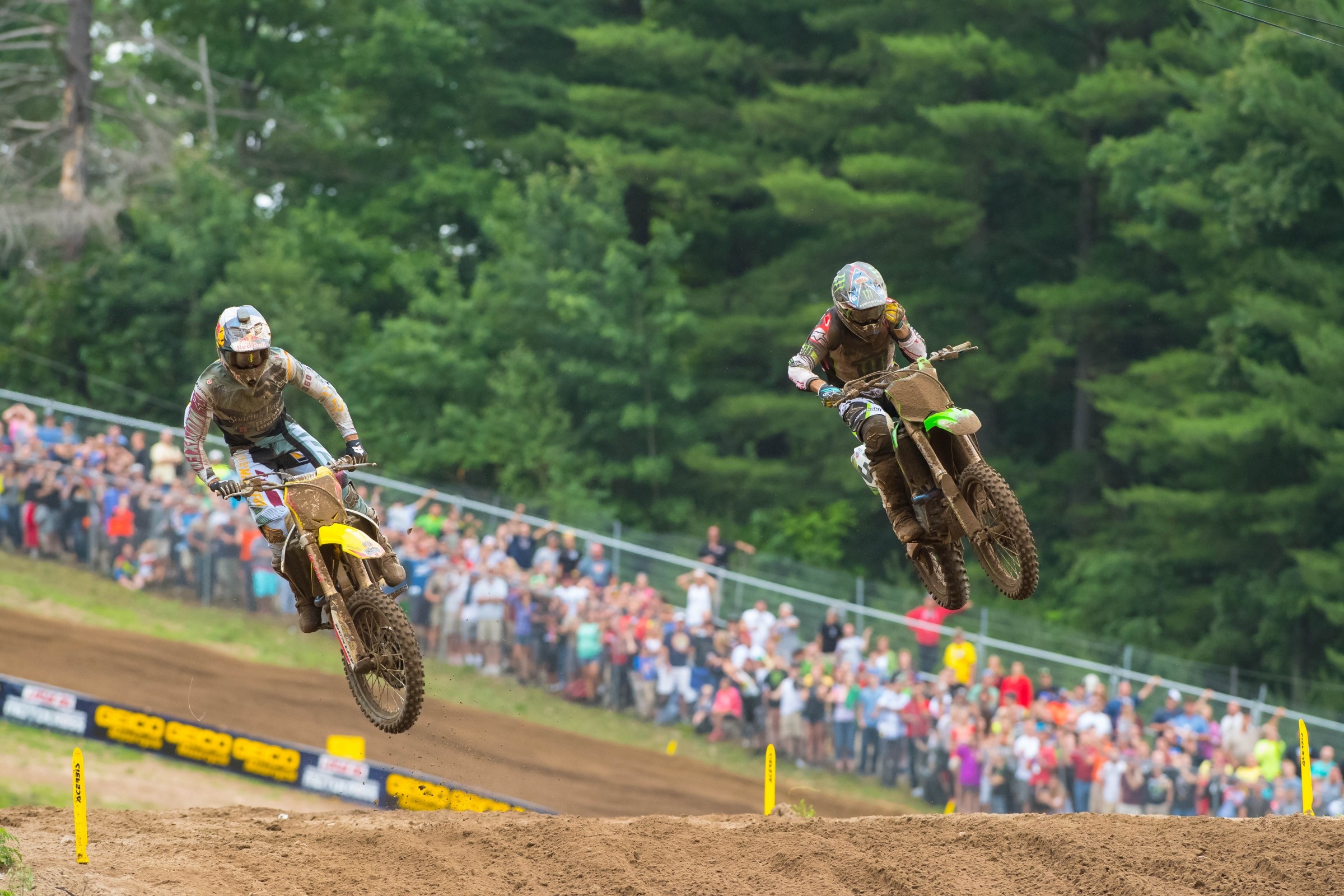 Eli Tomac finally got himself a win. It took far longer than I’m sure he and his Monster Energy Kawasaki team would have liked, but he came in and controlled both motos en route to a 1-1 finish at Southwick on Saturday. I’m sure there will be many columns written about Tomac delivering a great ride in the sand. I will leave those to someone else. I want to talk about Ken Roczen’s day and what this all means.

Kenny had been on a hot streak. He had won every moto, in fact, besides the weird mechanical failure suffered at Glen Helen. He left zero doubt that he was fastest rider in the series and he was even making it look easy. His confidence was at an all-time high and he was lowering his competition’s confidence week after week. If you watched the facial expressions and body language of both Kenny and Eli, it was easy to deduce who was having a great summer and who was searching for answers. This weekend in Southwick’s sandbox, however, Kenny finally had to fight some adversity.

It wasn’t that he was riding poorly. In fact, he looked great. He was able to pass riders and move to the front, just like he had done all season. This time, though, Eli was able to go with him. For several laps, Eli was a yo-yo, moving to Kenny’s rear wheel and then falling off the back a bit. When he finally did make his move in the first moto, I was interested to see Kenny’s response.

Kenny had been supremely confident this year so surely he would counter-attack right away. He wouldn’t want to let Eli have an ounce of confidence and if he felt able, he would fight back ferociously. “If he felt able” was a key factor, though, because this time he wasn’t able to. I was surprised to see Eli stretching it out and Kenny seemingly unable to respond. I wondered if he would have something to share about a bike issue on the podium or if he would simply give Eli credit.

As we now know, in his post-moto interview, Roczen shared that he was struggling with his forks (coincidentally the same forks that failed him at Glen Helen). He felt that the air fork was pumping up in the deep sand and the performance deteriorated accordingly. He knew that Eli was using a spring fork and wouldn’t have the same situation to deal with (there has been an issue with air forks building additional air pressure during the race, which adversely affects their performance. The deep bumps at Southwick only make that problem worse than usual). Kenny felt that his bike was getting worse and Eli was at an advantage because spring forks maintain consistent performance throughout the moto.

No doubt, there is a mechanical element to all of this. But I think there is a crucial aspect at work here—the effect that the mind has over performance. As Eli pressured Kenny and finally made the pass, I think Kenny’s mind was his worst enemy as he began to note the fork dilemma. I have no doubt that he was struggling with his suspension and he would have loved to make a mid-moto change. But I also think that he let that frustration get the best of him. As Tomac went by, Kenny looked to give in to the anger and let it disrupt his focus. Not only did he give up the chase on Tomac, he gave up 25 seconds in the process. At the checkers, he had let Marvin Musquin close in within reasonable distance, too. I think he was just managing Musquin’s progress and limping to the finish but I also think he completely gave up on that moto.

One moto, or even a moment in a moto, like Cooper Webb’s last lap pass for the win at Muddy Creek, can change the whole course of a series.

Now, we can’t know just how bad Kenny’s bike was affected. For all we know, it could have been a heroic effort just to hold on to second position. I would bet against that, though. I think his pride over letting Eli finally get a win played a role. When he realized that Eli was going to inevitably win, whether because of a fork situation or simply because Eli was having a great day, he lost that razor edge focus. I feel he could have kept it far closer than he did. Maybe he just knew it was futile to chase Eli in that first moto and wanted to save energy. Maybe the bike was so unstable that he had no choice but to back it down and salvage what he could. I realize those are very possible scenarios. Still, I feel the resentment and anger about what he was feeling from the forks was instrumental in that moto turning into a run-away.

The second moto was a different story, though. Kenny’s team made bike changes and his performance was much better. Sure, Eli was still the better of the two and won his second moto of the day, but Kenny was close. He pushed Eli the whole way and even on the last lap, I thought he had a chance to pull off an incredible surprise move. Kenny’s body English on the bike, his intensity, and effort level all looked completely different compared to moto one. He looked more comfortable and much more willing to fight. He didn’t get discouraged, he didn’t let Eli go, and he fought till the end.

Of course, there is the possibility that his bike was just that much better and he was simply able to go faster. He may claim this and say my theory is just psychobabble and I’m okay with that. I just happen to think there was more to it. I think he lost his poise a bit in that first moto and needed to regroup. Between motos, he found some resolve and even though he wasn’t able to beat Eli, he put up a much better fight. He fought until the checkered flag flew, even if it wasn’t the result he wanted.

These championship series’ are marked by the ebb and flow of confidence. Many believe it is the single most important aspect of the sport. With talent levels so marginally close, every manufacturer building incredibly great motorcycles, and yet still such large swings in results, it makes sense, right?

Look at Justin Barcia’s overnight improvement last summer, for example. Nothing changed on the bike. He didn’t suddenly learn how to ride better. He just had a good moto in the mud and then believed he should be at the front of the pack.

The big question now is: will the same thing happen for Eli?

Remember, he was unquestionably the best and fastest rider for the first five motos of 2015. He hasn’t had that same magic and mentally, that has taken a toll. Until last weekend, Roczen had a huge advantage in the mental side, and Eli couldn’t find any sort of edge or angle to build from. Kenny was able to fight off challenges when Eli was on his game and run away with big victories when he wasn’t. That script flipped in Southwick’s sand, but we won’t see conditions like that again. As the tracks return to the conditions where Kenny has been seemingly unbeatable, it all gets interesting. If Kenny comes out this Saturday and re-establishes his place at the top of the pecking order, Eli’s win will be nothing but an anomaly. Kenny’s fork issue will be validated and Eli will have to wonder if he can replicate that result on a “normal” track.

But, if Eli can come out and take it to Kenny again, that will have huge ramifications. Eli will gain a huge boost mentally and enter every moto thinking he can and should win. He will steal every ounce of hard-earned confidence that Kenny gained over the first six races. It’s crazy to think that confidence can be so fleeting but that’s exactly how this sport works. Just like a football game, confidence and momentum are fluid. One moto, or even a moment in a moto, like Cooper Webb’s last lap pass for the win at Muddy Creek, can change the whole course of a series.

Eli stole some of Kenny’s mojo at Southwick and a huge opportunity is waiting at Millville for both. Eli can turn the tide if he can find a way to win again. Kenny can end Eli’s ascension with a rebound win. I have no idea who will win this weekend, but I know this: sure, there are points on the line and huge money for whomever wins, but they are really battling for pride and pure competitive rivalry. That is unquestionably the best, and most important, part of each race.