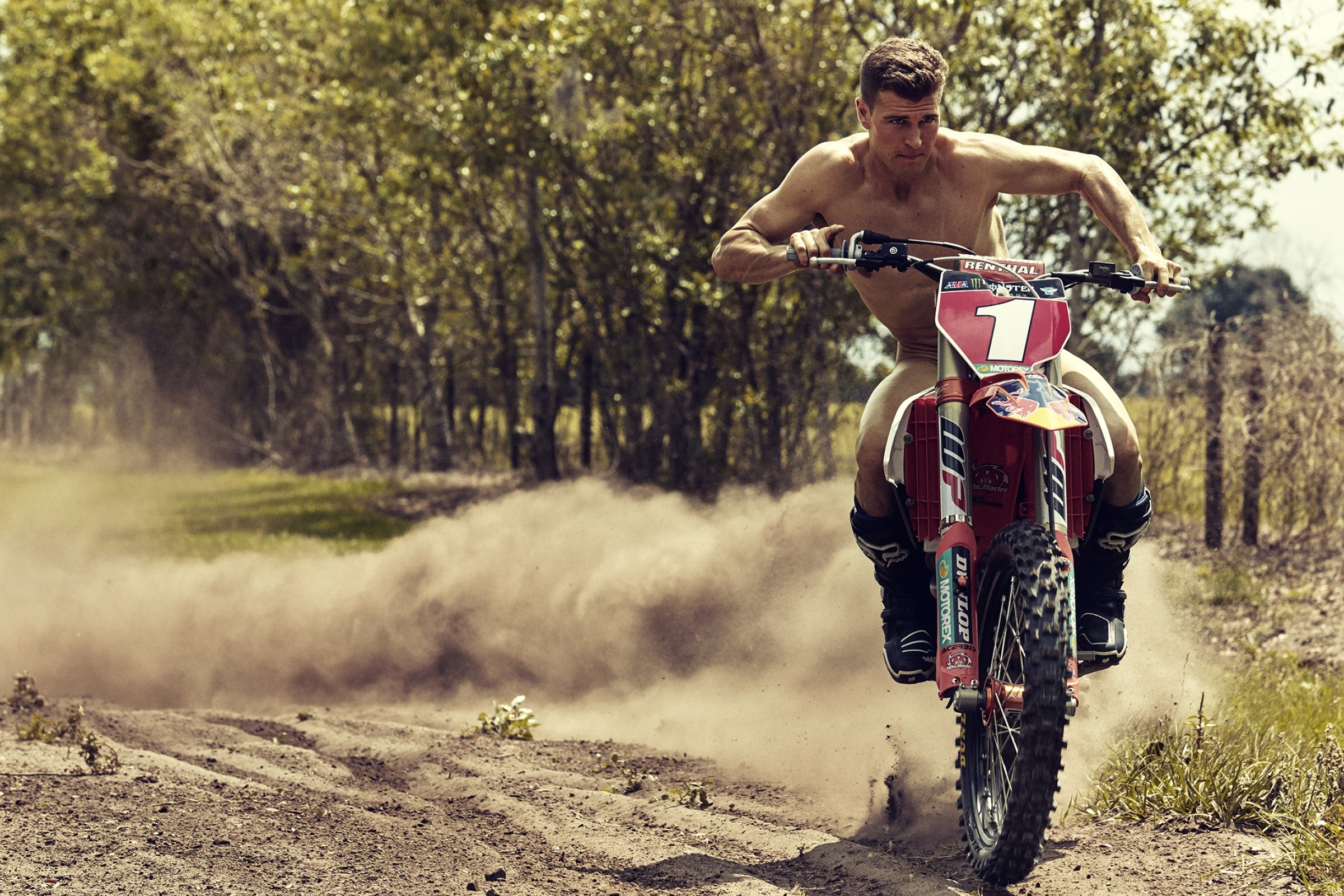 The eight-time AMA Supercross and Motocross Champion isn’t the first motorcycle athlete to appear in the issue. Travis Pastrana was featured with his wife, Lyn-z in 2014, and Tarah Gieger was featured in 2013. Dungey is the first 450 Supercross champion to pose.

Dungey, of course, does appear nude in the photos—as does every other athlete that has ever been featured in The Body Issue. Don’t worry, the athletes are always posed in a manner that prevents you from seeing stuff the censors wouldn’t want you to see. Dungey’s appearance is about more than just tastefully riding his bike in the nude, though. In the lead-up to the issue, which is available online today, and on newsstand July 8, ESPN Body Issue reporter Morty Ain sat down with Dungey to discuss a number of different things. If you read the story, or watch the video, you’ll quickly get the message of the issue: showing how physically and mentally demanding dirt bike racing is.

This is just a small except from the piece on XGames.com:

“I definitely think the physicality of the sport is overlooked and underappreciated. Anybody who gets on a dirt bike would be quick to find out that it's a very hard workout. Nobody can see our faces underneath [our helmets]; our faces are beet red. Picture running up a steep incline at 5 or 10 percent grade for 35 minutes at a pace where you're dang near about to quit -- you're at your max and you can't take no more. That's what we're feeling when we're on a dirt bike. It takes a lot of suffering.”

Anyone reading ESPN the Magazine knows NBA and NFL players like Wade and Miller are elite athletes. Dungey’s piece shows the world motocrossers are as well.

Beyond that, Ain found out something about Dungey you’d never imagine. Supercross triples? No prob. LaRocco’s Leap? Easy. But roller coasters? He’d rather not.

“Roller coasters? Oh dude, I'm not a fan. I think it's a control thing [laughs],” he told Ain. “On the dirt bike, I feel like I'm in control. But when it comes to all that stuff, my mind gets thinking too much.”

There is more of the same in the video published today:

This is far from the first time Dungey, who is currently recovering from a cracked C6 vertebrae sustained in the second moto at Round 3 of Lucas Oil Pro Motocross from Thunder Valley, has generated mainstream press. In 2015, he became the first motocross/supercross racer to win an ESPY for Best Action Sports Male Athlete. (He’s also been nominated this year. You can vote here.)

In 2016, he became the first motocross/supercross athlete to appear on the cover of the Wheaties box, joining such legends as Michael Jordan, Barry Sanders, Babe Ruth, Larry Bird, John Elway…. The list goes on and on and on.

It’s becoming quite easy to argue that Ryan Dungey has done more for this sport, in terms of mainstream press, than anyone. It’s not for him, though. It’s so the sport can grow, with his help.

In 2015, I wrote the Racer X Illustrated Rider of the Year story on Dungey, and asked him how important it was to receive the ESPY. This is part of his answer: “Getting an ESPY and getting that mainstream recognition and doing things like ESPN and SportsCenter, I’m not up there doing it all for myself. It’s for all of us. It’s important that all of us realize that it’s not me specifically that did this; it’s everybody’s commitments and everybody’s sacrifices that everybody’s made along the way from the teams, the personnel, you, everybody there at Racer X. You name it. Everybody in the community. And that’s why I believe we’re starting to get that mainstream recognition, which overall is going to help our sport.”

That is who Ryan Dungey is. Doing what he can to leave the sport in a better place, deflecting the credit from himself, even when he’s going so far as to pose in the buff on his bike.

Today is just another example.

You can subscribe to the latest issue of ESPN the Magazine here.