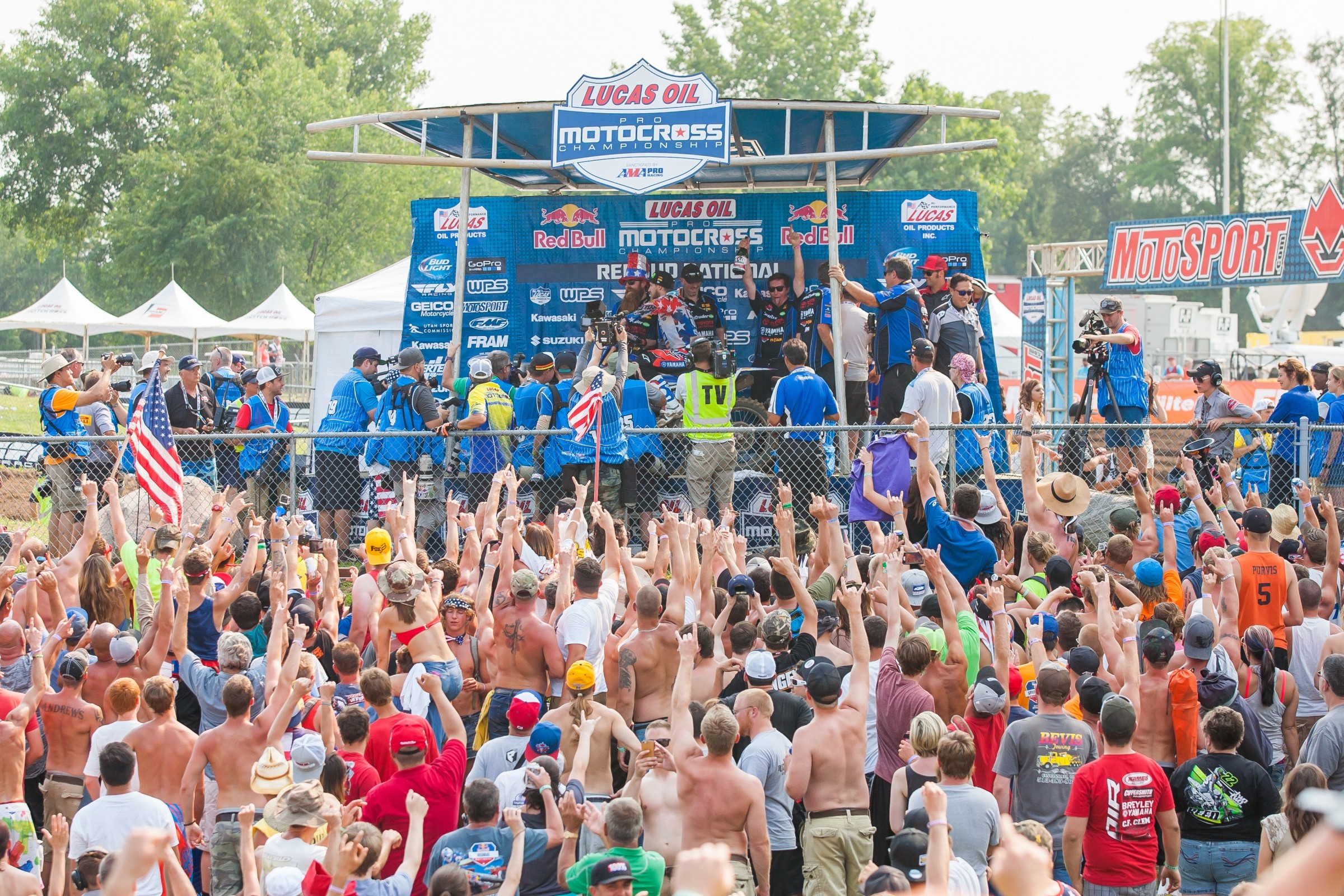 RedBuuuuuudddddd!!! Anyone who has ever been to Buchanan, Michigan for the Fourth of July motocross extravaganza surely has that unforgettable phrase burnt into their memory. RedBud (RedBud Track n Trail for you old schoolers) is arguably the best national of the season and a favorite of riders and fans alike. Set just inside the Michigan line, fans travel from all over the Midwest for a weekend of racing, spectating and God knows what else that goes on over in Lot B. The weekend is ratcheted up even further when our Independence Day holiday lands on a Monday, like this year. That gives race-goers, party-goers, and those who simply can’t remember why they came or even where they came from, a chance to regroup before heading back to work on Tuesday morning.

Amateur racing will rage throughout the weekend down on the night track, giving everyone a way to partake in the action. No other race on the schedule has more of a party atmosphere than RedBud and that enthusiasm spills into race day for riders and crew members, too. Everyone simply seems to be having a good time at RedBud. If for no other reason than to pay respect to the late Gene Ritchie, this year’s RedBud is going to be next level on every front.

The track itself has undergone huge changes from what it once was. If you pop in a VHS from say, 1995, you’ll notice how hard-packed RedBud used to be (yes, I know that no one uses VHS anymore. YouTube it, kids). It would start out muddy and rutty in the morning but as the summer sun set in, those ruts would dry into a treacherous gauntlet of a racetrack. Nowadays, that hard clay has been covered and inundated with tons and tons of sand and mulch. The soil is deep and soft, adding incredible traction and huge braking bumps. It’s a far cry from the old RedBud, but in my opinion, a great deal better.

The jumps are big enough to make pro riders second-guess their skill set. It’s not that they are dangerous, it’s just that the takeoff’s are very tall and the distances very big. LaRocco’s Leap is the most famous jump on the calendar and of course the trademark obstacle of the event but there is also a huge double looming on the far hillside as well. After clearing these jumps a few times on Saturday morning, most riders will find their comfort zone but those first few attempts of the day are enough to make more than one rider reconsider his career choice.

The sand whoops are a fairly new addition (in the grand scheme of the event) and on the hotter editions of RedBud, dreaded by the riders in the second moto. The whoops become incredibly rutted at the beginning but the ruts are traded for a square-edged base on each whoop toward the end. These rolling whoops are usually pretty simple for riders of this caliber, but as energy levels drop and fatigue sets in, things can go awry quickly. This section is also a great place to make up time, but passing can be tricky.

The smart riders will stay down the right side if under duress, then simply control the inside before the right hand turn at the end of the section. That turn becomes one line on the exit and into the next tabletop, forcing the following rider to tuck back in behind if he doesn’t secure the pass in the previous whoop section. It’s never fun to ride defensively but savvy riders know this is a section that can be managed.

The start is one of the deepest on the series. The big RedBud tractors do their work before each and every gate drop, churning the Midwest clay into a virtual quicksand of moto magic. Watch for the bikes with the most torque to pull the starts here. My money would be on the Yamahas and KTMs for good starts all day long in the 450 class.

Yawn. Ken Roczen. Kenny is en fuego. That’s “on fire” for you English-only folks at home. He’s controlled this entire series and if not for a fork malfunction at Glen Helen, could be on a hell of a streak. He’s been impressive to say the least.

Eli Tomac closed the gap and showed that perhaps there is light at the end of this tunnel. He pushed Kenny to his limit last weekend and while he still lost six more points, he was absolutely on pace to win. Compared to his first couple of weekends, that was a hugely positive step.

Cooper Webb set the home crowd fans ablaze with his last lap heroics in Tennessee. He took the overall win and firmly stamped his legitimacy for this outdoor title. If his wrist is indeed ready to go and he can get down to business during the week, things may be turning Cooper’s way sooner than later.

Shane McElrath damn near won the second moto at Muddy Creek and turned his entire season around in one day. I thought he would have a good day last Saturday but no one could have predicted that level from the likable kid from North Carolina.

Broc Tickle rode the hometown momentum to a podium finish and he couldn’t have picked a better time. He, along with several others, are in the running for a few factory-level rides left unoccupied. That finish had to help his chances for landing a deal for 2017.

Justin Barcia tangled with his teammate Phil Nicoletti while both were running up front in the first moto. That couldn’t have been fun back at the truck and things just haven’t clicked yet for JB51. I still think he will figure this out and be a podium guy before summer winds down.

Injuries have taken a toll on the 450 field. Thanks for nothing, injury bug. You suck.

Alex Martin is riding great but crashes and DNF’s are killing his title hopes. He needs to string together some podium finishes to crawl back into this picture.

Justin Barcia makes the mistake of taking out his other teammate, Weston Peick. He is soundly and publicly beaten for this mistake.

The Martin brothers both rebound, each landing on the podium.

After visits by Chad Reed and Steve Matthes, there is a buzz about MXGP in post-race videos and interviews. But then RedBud bitch slaps all of that nonsense and everyone remembers why riders come to America.

Alex Martin holeshots and wins a moto in convincing fashion.

Twenty-seven children are conceived in Lot B over the weekend.