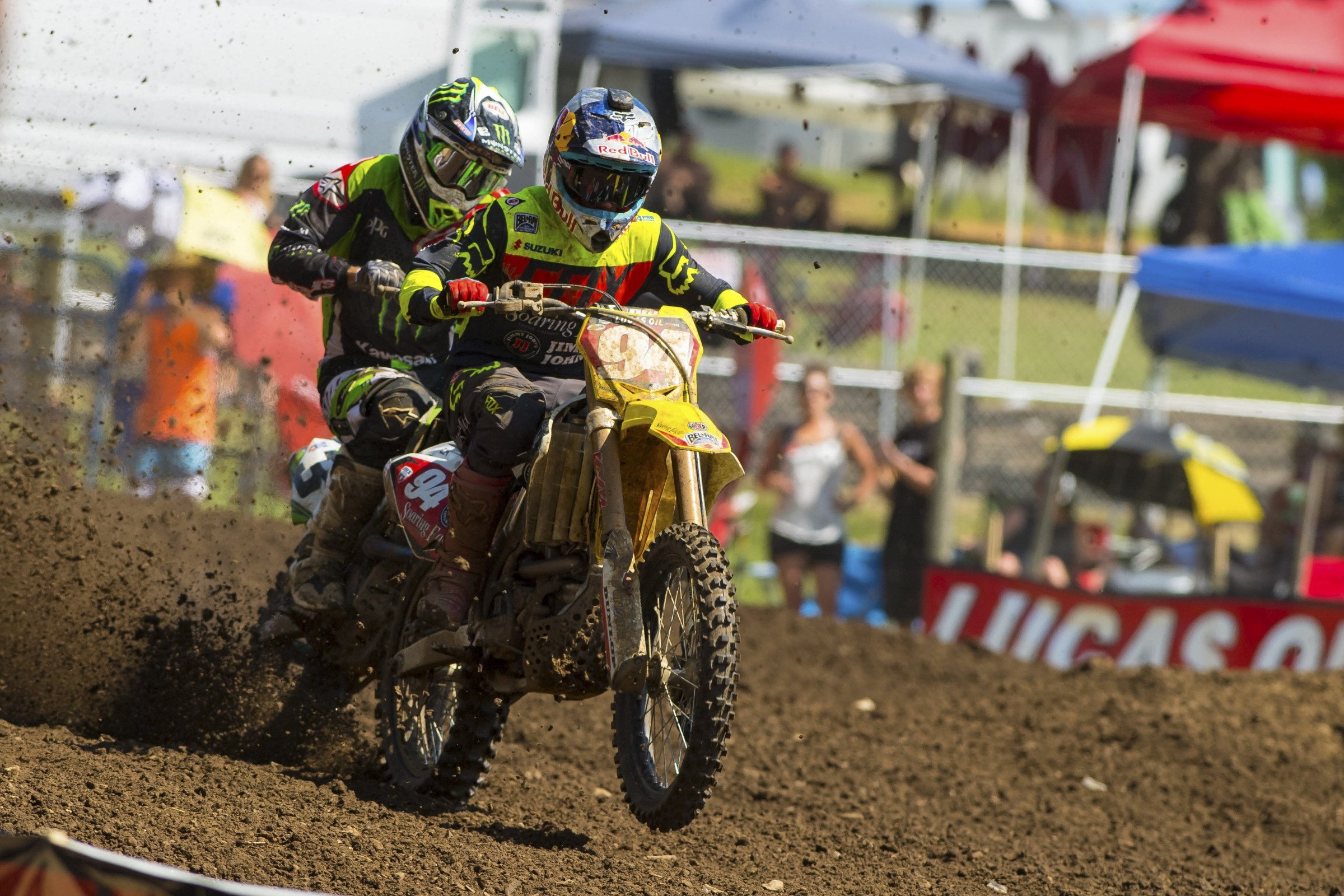 Many riders will tell you there’s no stronger motivation than racing at a hometown track. There’s just something about having your friends and family hanging over the fences cheering you on as you turn laps on a track you’ve been racing your whole life! It can be enough to take a rider to the next level, which is what happened with Shane McElrath at Muddy Creek when he led seventeen of eighteen laps in the second moto. Now that he knows what it’s like to be up front for an extended period of time, we’ll see if he backs his first career podium up this weekend at a rowdy RedBud. –Aaron Hansel

Finally, a battle for the lead! Ken Roczen’s been about as untouchable as it gets this season but he finally had a fight on his hands from Eli Tomac last week in Tennessee. Yes, Roczen walked away with another perfect day, but Tomac fans have got to be pumped the Monster Energy Kawasaki rider was finally able to battle up front, something they’ve been waiting for all season. We’ve seen some unreal battles between these two in the past, and now that Tomac seems to have some of his early-season issues sorted, we could be in for another heavyweight duel on Lucas Oil Pro Motocross’ biggest weekend of the summer. –Hansel

The Cooper Webb that showed up at Muddy Creek one week ago is the Webb we’re used to seeing—the guy that wins. Before the season opener, we weren’t even sure if he’d make it this far in the series, due to the broken scaphoid, a long-healing bone in the wrist, he suffered before Hangtown. Well, he did indeed make it this far, he’s managed to stay in the hunt, and it appears he’s starting to hit his stride. And with seven rounds left, he’s got plenty of time to make Joey Savatgy’s twelve-point lead disappear. Heck, with the way the 250 Class has been, that lead could disappear in a single moto, then come back the next! We’ll see if Webb gives up ground to Savatgy or gets closer to the red plate at RedBud. –Hansel

With Zach Osborne taking his best career moto finish at High Point, we thought he might be a threat for another podium, or even a win, in Tennessee. Well, he wasn’t, but not because of a lack of speed. He was fast in qualifying (third), took third in the first moto even with a not-so-great start, but crashed early in the second. Even so he was able to charge back up to tenth, despite being outside the top twenty at one point. Don’t let his sixth overall from Muddy Creek trick you into believing his near overall win at High Point was a flash in the pan—he’s perfectly capable of challenging again this Saturday. –Hansel

Well, Broc Tickle is listed as hailing from Holly, Michigan, but he actually grew up in North Carolina. His wife is from Michigan, so that’s how he got the new address. So while this weekend would seem to be his home track, Muddy Creek actually was. And as it did for McElrath, it did for him: Tickle nailed his first podium in a long time (2012, to be exact). Now we get to see if Broc can carry that momentum and confidence forward. If you’re in any fantasy leagues, be sure to make Tickle one of your top picks this Saturday. -Hansel

Remember a year ago at this time? Justin Barcia was coming off a 3-1 performance at Budds Creek (literally racing in a creek) for his first career 450MX win. He came to RedBud, stared down eventual champion Ryan Dungey and took a second straight overall with a gutsy 2-1 performance. (You really need to go back and watch this battle; it was one of the better ones all year.) This year, things haven’t exactly gone to plan thus far for BamBam. He’s yet to podium, hasn’t led a lap and has only one holeshot (he seemingly nailed every one last year). There’s still time for Barcia to turn it around, and with the 450 Class looking more and more like a mash unit everyday, the opportunity is there. Will RedBud be the turning point? –Chase Stallo

Racing outdoors! This is not an April Fools joke. The four-time Arenacross champion returns to Lucas Oil Pro Motocross for the first time since 2009. “I’m really happy to have the opportunity to race the outdoors,” he said in a team press release last week. Bowers is filling-in for the injured Josh Grant (who was filling in for the injured Wil Hahn) at Monster Energy Kawasaki after Grant decided to undergo double ankle surgery—an injury that had been causing him trouble over the years. The last time Bowers raced RedBud (2009) he finished eighth overall in the 450 Class, sandwiched between Michael Byrne (now retired) and Nick Wey (kind of retired). How will the bear do this weekend? –Stallo

Entering High Point, both Jeremy Martin and older brother Alex were in prime position for the title. Each were coming off overall podium performances at Thunder Valley (Jeremy second; Alex third) and each trailed points leader Joey Savatgy by less than ten points (Jeremy 3; Alex 9). Since then they’ve had bike problems at High Point; Alex crashed in moto one at Muddy Creek; and Jeremy was unable to fight through the pack after less than stellar starts. They now enter the weekend each a full moto (plus some) behind in points (Jeremy 32; Alex 47) and in desperate need of a win. The good news is that RedBud is a track that works well for them—those sand whoops were literally modeled after the ones in the Martin’s backyard in Minnesota. Will the fortunes of the brothers turn on Saturday? –Stallo

Austin Forkner is quietly having one of the better rookie seasons we’ve seen in some time. Through five rounds the Missouri native has only finished outside the top ten twice, has one moto podium (Glen Helen) and four additional moto top five finishes. Impressive stuff! Yet, it seems like the majority of the attention has swung to his teammate (points leader Joey Savatgy) or the fleet of Star Yamahas at the head of the pack every weekend. Maybe that’s a good thing. He’s been able to calmly adjust to the rigors of Pro Motocross without every result held under a microscope. That soon may change, because he could challenge for wins by the end of the year. –Stallo

Since 1978, RedBud has hosted a round of Lucas Oil Pro Motocross on Fourth of July weekend. It’s fitting that the largest, rowdiest crowd in motocross welcomes in Independence Day every year. This year will hold an extra special meaning, as the founder of RedBud, Gene Ritchie, passed away this past February. If you’re going to the event, you’ll see this special sign that was done to honor the late founder. This one is for Gene. –Stallo