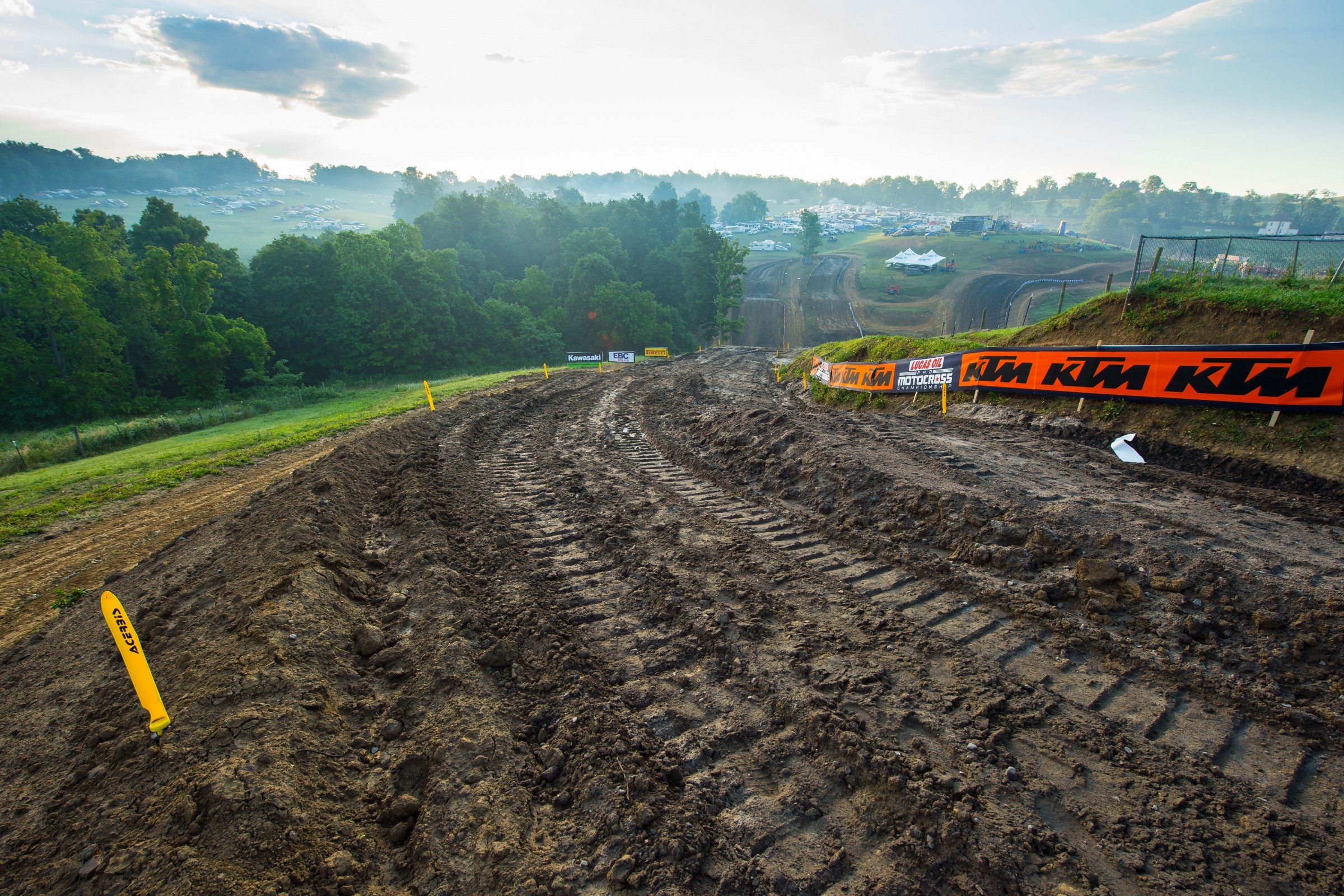 Tracks in the Lucas Oil Pro Motocross Championship have significantly changed in the last 20 years or so. Most of the venues are the same now, but how the dirt is prepared and subsequently how the track surface responds is very different. Racing in its current form looks very similar from track to track. The promoters have tried to provide great traction each week and offer the best racing surface possible. That means bringing sand and mulch in, softening the harder dirt.

If you go back and watch an old race video from the 1980s or ‘90s, you will notice tracks like RedBud and Hangtown were very hard packed, almost like concrete in some sections. Soft, deep, groomed loam seems better than that. If you see a photo or video designed to make you all pumped on riding, is it a guy blasting a deep, soft, sandy berm, or a hard packed, slick, concrete-like section?

In the past, when track workers would water the track during the day, it made the track even worse. The water wouldn’t soak in to the hard surface, so it just made it more slippery. The addition of the sand-type dirt creates a much more workable surface that will absorb moisture. The track stays much more manageable, creating better racing and safer conditions. In the old days, some tracks were rock hard in the second motos, and riders were tiptoeing around the early laps because of the mud and puddles. Now you have full-speed sprinting—racing—right off the start. This conscious change by promoters has been widely discussed and for the most part has been considered a good change, I think.

There is also the line of thought that it has taken away the variance and uniqueness of each track across the country. That side of the argument feels that riders may have lost some of the adaptability with tracks being so similar. The series used to offer so many different surfaces, forcing riders to improve on all sorts of different tracks—hard pack at Hangtown, sand at Southwick, and everything else in between. Some even think that hurts our riders at the Motocross des Nations, which often still offers up those hard packed, slippery, choppy conditions. Over here the tracks are all good, but more similar to each other. The only factor to change the script for our tracks is the weather. Rain, or even the threat of hard rain, can force the tracks into conditions that we wouldn’t otherwise see. This weekend in High Point was a perfect example of that.

The High Point track can feature some of the best traction on earth. My earliest memories of racing there are full of Dave Coombs, Sr. driving around in his tractor with a huge disc on the back, turning the southern Pennsylvania soil into motocross heaven. Seemingly in between each moto, the track would have some section that had been made perfect again but as the moto wore on, huge ruts and bumps would come back. The dirt was so pliable and workable that the lines would constantly change, keeping riders on their toes to adjust their lines. With the tighter schedule due to live television, that available time to do track work has deteriorated. As soon as one moto finishes, the next moto is heading to the starting gate. In recent years, the track doesn’t change as much during the day. With the big rain on Thursday night, however, that dynamic was turned on its ear. The rain created a very soft track surface and ever-changing lines. The ruts were deeper than I can remember in a long time, forcing riders to think more in their approach. Riders were making mistakes all over the track. The laptimes were varying by multiple seconds per lap, which simply doesn’t happen on most weekends.

If you go back and look at Hangtown, for example, the laptimes were within the same second lap after lap after lap. Riders were hitting the exact same lines over and over, not making mistakes and almost robotic in nature. Compare that to High Point last weekend and it was a huge difference. You could see riders switching up their lines, being forced into the outsides because of the massive inside ruts. And once those outside ruts got too deep, new ultra-inside ruts formed.

The LitPro segment from practice was great evidence of this, as Marvin Musquin and Jason Anderson’s lines were very different but almost identical in overall time. Musquin was sweeping everything, covering more distance but also carrying more momentum. Anderson was shortening the track but also having to slow down much more for each corner. Both had completely different approaches, but equally effective.

Speaking of Musquin, I think that coming from Europe, he excels when the track is out of the “norm.” He grew up racing on all sorts of different surfaces, winning two world championships along the way. His strength is in his technique. He has great finesse and an ability to put the motorcycle in exactly the line he wants, even when the turn is off-cambered or has ten ruts. When the track slows down and takes more thought, he always shows his prowess. So much of American racing is mind-numbing speed with one or two options for every turn. I don’t think that’s Marvin’s ideal scenario and you can see it in his lackluster results in the early rounds. At High Point, though, he was able to dissect the track and maximize his efficiency. He could use unorthodox lines and utilize his skill set.

Overall, I think that the “new era” tracks are better. I raced nationals back then and also recently enough to fully understand the pros and cons of each approach to track prep. It used to be downright scary to push the edge the old way. I can remember racing the first lap of the Gatorback national in 1997 and not being able to see where I was going at all because of the dust. I can also remember slowly creeping around the first lap of the 2000 Hangtown national because the track was so icy after watering the asphalt-like surface. I can also remember the 2009 Millville National, where the entire track was prepped before each moto, and everyone hit blinding speeds in the early laps. The fear factor was present at all of those races, but for a completely opposite reason.

Ideally, you find a happy medium. Having tracks with safe jumps, moist dirt, multiple lines in every corner and discernable variations around the country would be fantastic. It is also much easier said than done. If forced to choose, though, I will take today’s tracks even if they are all “similar.” RedBud in the 1990s was not that awesome or fun to ride. The second motos were hard, slippery, and dusty. Now, it’s widely considered as the best track on the calendar. Hangtown was basically like racing on the nearest freeway but now has pretty decent traction. Thunder Valley in Colorado is rock hard and slippery by nature but track owner David Clabaugh turns it into a soft, rutty track for the national, offering great racing and traction.

Sure, we lose some of the uniqueness we could see but everything is a trade-off when it comes to finding a perfect scenario. Ultimately, promoters made the decision to make tracks softer and better for the riders. Softening the track makes it safer, as well. I’ll take that decision every time.