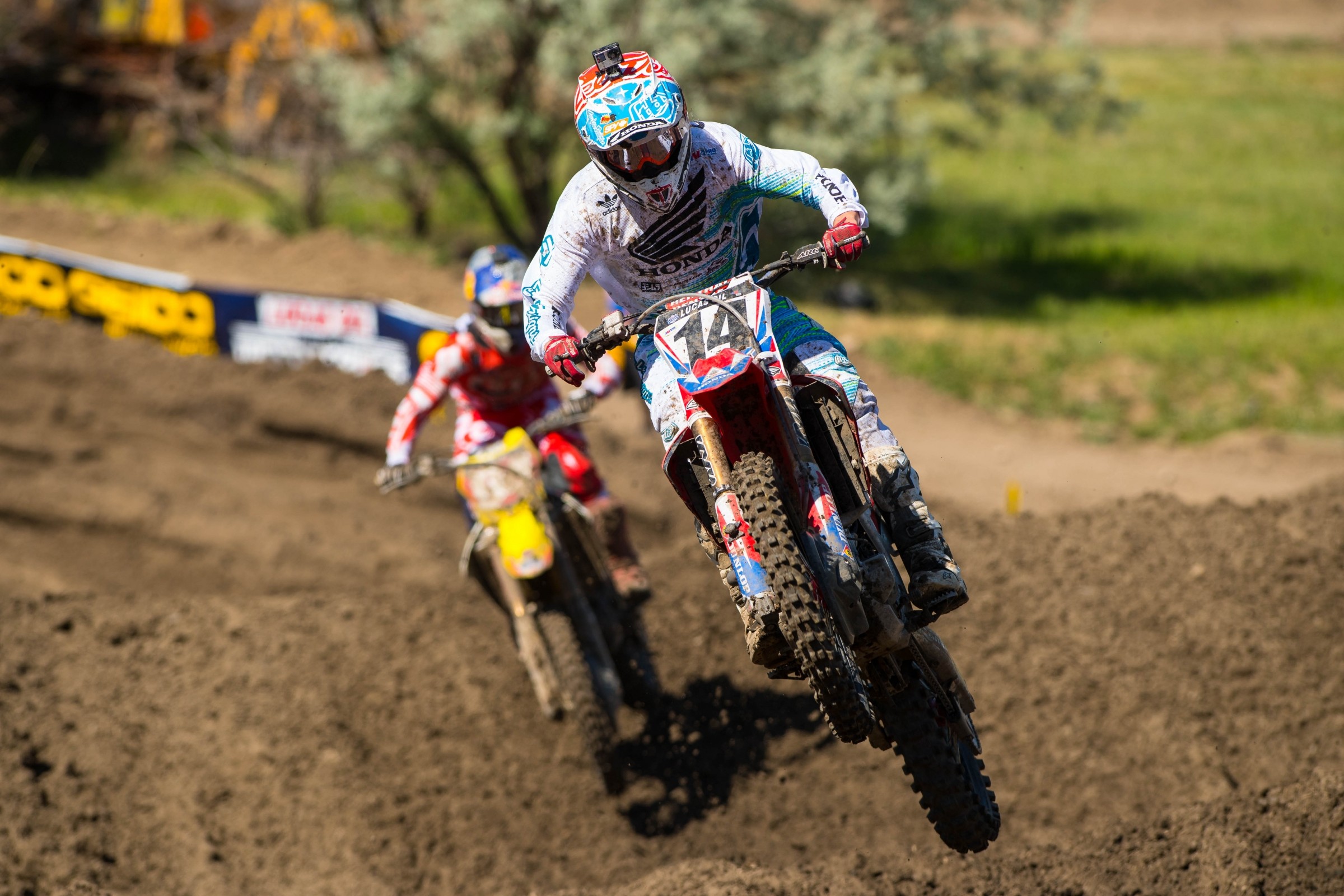 3 on 3 Questions After Thunder Valley

1. Who will benefit most from the break?

Jason Thomas: My first choice was Ryan Dungey but with his injury news, I will go with the 250 defending champ and fellow Minnesotan, Jeremy Martin. JMart hasn't looked like the 2014 and 2015 versions of himself. While he’s won one moto, we haven't seen the dominating performances of previous years. His brother has been better than him on more than one occasion and he seemingly could do nothing about it. I am not sure if it was his split with Johnny O'Mara or if he was still feeling the effects of a head cold but he just hasn't been on the level I expected. I think the weekend off will give him time to sort some things out and regroup before Mt. Morris. He is still sitting in a very good spot for the championship and would still be the favorite if placing bets in Vegas. I like his chances to come out swinging on June 18.

David Pingree: Adam Cianciarulo. AC has had a rough three rounds with a few sprinkles of hope mixed in. His speed is good at times and he did get a couple good starts, including one in Colorado. It has been so long since he’s competed I have to think that the first three rounds came at him pretty fast. He’s likely identified weaknesses and is focused on coming into Round 4 swinging. Adam also hit the deck pretty hard in the second moto at Thunder Valley and, from what I understand, he flew home with a pretty sore shoulder. Hopefully it’s just a bruise and nothing a few days off won’t fix. I’m a big AC fan and I would love to see him dial it up to ten, or maybe even eleven, during the next run of nationals.

Steve Matthes: I'm was going to go with Jeremy Martin but JT covered him already. So another rider that I think can use the break to get better is Cooper Webb. I spoke with Webb after Lakewood and he mentioned that the week prior was the first time he got to practice during the week. His wrist is feeling better, he'll get another week of healing time and we'll stop seeing these sub-par (for him) second motos. I've been impressed with Cooper going out there to try and get his first 250MX title before he moves up and maybe, just maybe, he'll be able to do it.

2. How different are the tracks on the east?

Thomas: They are quite a bit different but it's not just the tracks; it's also the weather. Both the loamier dirt and the humidity change the game a bit. The bumps form differently and the aggression level can be ramped up but I feel the heat and humidity is more of a factor as it takes such a toll on the body and mind. These elite level racers are good on all sorts of soil but when it's 95 degrees and the humidity is cranking, that's when we see who has it and who doesn't.

Ping: The tracks are different and the soil is different but it’s nothing all of these riders haven’t seen before. The big factor is the environment. That includes everything from the temperature to the humidity to the hotels and restaurants and food. Many of these guys are creatures of habit and it can throw them out of their rhythm if things get too different. There was a reason Ricky Carmichael ate at Outback the night before every single national. As far as the humidity and heat, those living in Florida have an advantage. Other states can get heat waves at times but there isn’t a national with worse weather than a typical day in Florida. Those riders will have an edge when it heats up.

Matthes: All I know is that every team I ever wrenched on always had issues at the first East Coast race. All the testing we did at Glen Helen, Cahuilla, and Hangtown didn't mean a whole lot as the tackier dirt grabs your bike and "holds" it down a bit. The deep ruts didn't help either. Suspension needs to be stiffened up (also because the riders start going a bit faster as they get more comfy outdoors), the motor usually needs to be beefed up a bit and you've got to watch the temperatures of the bike as the temps outside get hotter. So a lot changes when you head east in terms of the motorcycles.

Thomas: I think he is doing a great job of improving his outdoor skills and fitness. That being said, I don't think he will become a title threat outdoors. The top three are too strong and too versatile at all of the tracks. I am interested to see how Cole does as we move east and the conditions change. Much like question #2 above, I think he may have a tougher time on the East Coast dirt he didn't grow up on and humidity he isn't accustomed to. That being said, he should be applauded for how he has performed thus far. He is exceeding everyone's expectations.

Ping: Before the series started I picked Cole to be the breakout rider this season in the 450 class and I think he is on course to make me look like a genius. Suck it, Matthes. Cole has shown great speed and backed that up with some good motos, including a podium in Colorado. I don’t know if he can get into the mix to win races this summer but he can definitely hit the podium again and be consistently in the top five. That, in my opinion, would certainly make him an “all-around guy,” which is even better than an “outdoor guy.”

Matthes: Why did Ping tell me to "suck it?” I'm confused. Did I say he couldn't be good? Anyhow, I think he can and will get better. I was speaking to HRC Honda team manager Dan Betley about Cole and he mentioned that Cole's started trying a new training program where they think he's adding more strength than he has in the past. Dan also mentioned that Seely's surrounded himself with guys like Jeff Ward and Brian Lopes who don't tell him what he wants to hear but what he needs to hear. Seely's the type of guy who wasn't a star when he was younger and he's a pretty humble dude for the most part so to change things up, they want to take an honest look at what he can do better (IE: the outdoors).