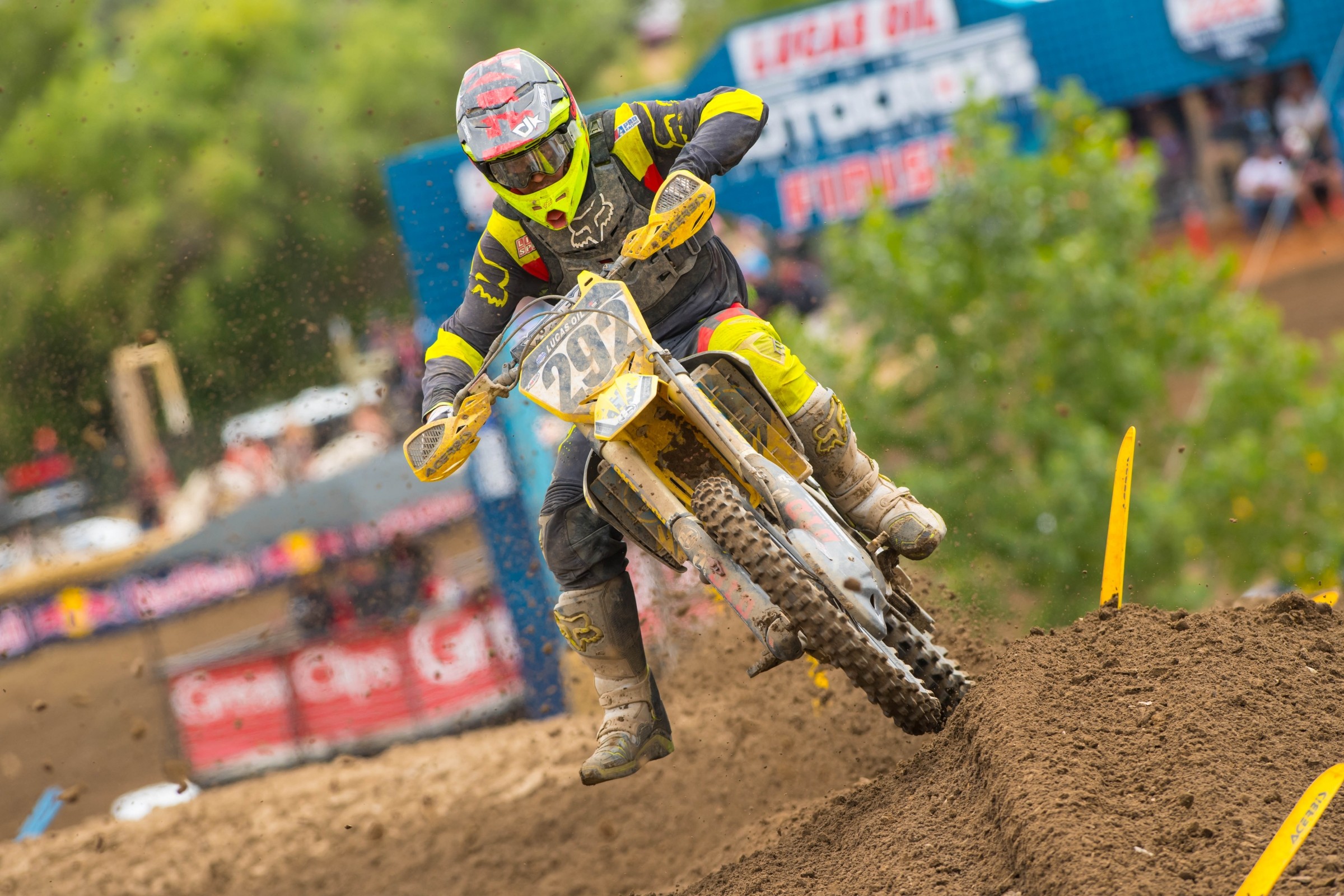 Towards the end of the 2010 Lucas Oil Pro Motocross Championship Red Bluff, California’s own Austin Howell made his professional debut with the then-Rockstar Suzuki team (now Rockstar Husqvarna) at Unadilla. It was a planned transition; he had ridden for the Rockstar Suzuki amateur team. As he looks back on it now the move to the pros wasn’t that much of a shock considering that he had been groomed for this moment. Howell was supposed to take his experience that he gained in the 2010 nationals into a successful 2011 season and perhaps live the luxury of a factory rider.

Flash forward to present day and Howell just recently made his comeback to the Lucas Oil Pro Motocross Championship after not racing an outdoor race for over two years.

“Finally! It’s been way too long,” Howell told us about his return the Monday after Hangtown.

A string of injuries have keep Howell on the sidelines, leading him to question his motocross career. Howell fractured his C-3 in his neck on four occasions in the span of four months during the 2014 season. The first break happened before the supercross season at a practice track.

He’d try to make a few comebacks in 2014 but as soon as he would try to ride he would just aggravate the injury further.

“The first time I did it I was in the hospital for a couple weeks with internal injuries,” Howell said. “It’s been injury after injury that’s been bugging me really.”

The final straw was at the Glen Helen National in 2014. That is when Howell decided to reevaluate his racing career and try to get his neck strong enough to return to racing.

“When I broke it at Glen Helen I was over it. I took my time and came back for supercross and then something else put me on my butt,” he said.

That something else was a knee injury that forced him out of the 2015 season and took him off of the bike for over a year. “It was a pretty scary moment in my life,” Howell admitted. “I had doctors telling me that I would be lucky to even walk again.’’

All of the tissue and ligaments were gone from Howell’s knee and a full reconstruction was diagnosed. If Howell were to get a reconstruction then it would have been difficult to come back to riding, so he decided to work on getting it stronger himself.

While rehabbing his knee Howell got a job building fences. He soon realized that his knee was holding up pretty well, so he started to train and prepare for another comeback.

Austin and his father sat down and created a plan for his return to racing this summer. Austin had saved up enough money from his fencing job to make it to all of the races with some help from his parents. For Austin, this summer is about settling some unfinished business as well as having fun on the road and racing dirt bikes again.

The plan is to race the entire Lucas Oil Pro Motocross Championship this summer out of his van. Austin’s girlfriend actually quit her job to join him on his journey to make it back to where he wants to be in the sport. His father is planning on flying in every weekend to help him bike maintenance.

For Howell’s first race back at Hangtown he felt that it went pretty well, but he also feels like he can do so much more in the remaining rounds.

Thank you for everything you do for me i love you . I will keep pushing and be at the top soon just need a little more work to myself and equipment and we will be there @rebecca301

Despite a rock breaking the lens of his goggles in the second moto Howell finished 27th overall with 30-23 moto scores. With the first round jitters out of the way he is expecting to build on this performance at Glen Helen.

“It was like it was 2010 all over again, it was just so much fun. I can’t even express my feelings enough about it. I just had a blast,” he said about his return. “No matter what happens this season I’m just glad to be back riding.”

With the first two rounds in California the traveling portion of the summer hasn’t started yet. Howell will start his road trip right after Glen Helen with his girlfriend and set out for Thunder Valley and then keep heading towards the East Coast.

He hopes to hit up a lot of practice tracks on the way as well as keep a good diet and training routine. These are of course obstacles of the road, but it’s all about the process. Howell knows that this trip could be a once of a lifetime opportunity and he’s not going to miss out on it, especially since he’s finally healthy and feeling better than ever on his bike.

“I’m just looking forward to this outdoor season and turning some heads,” Howell explained. “I really want to get on a team and that’s my goal.”