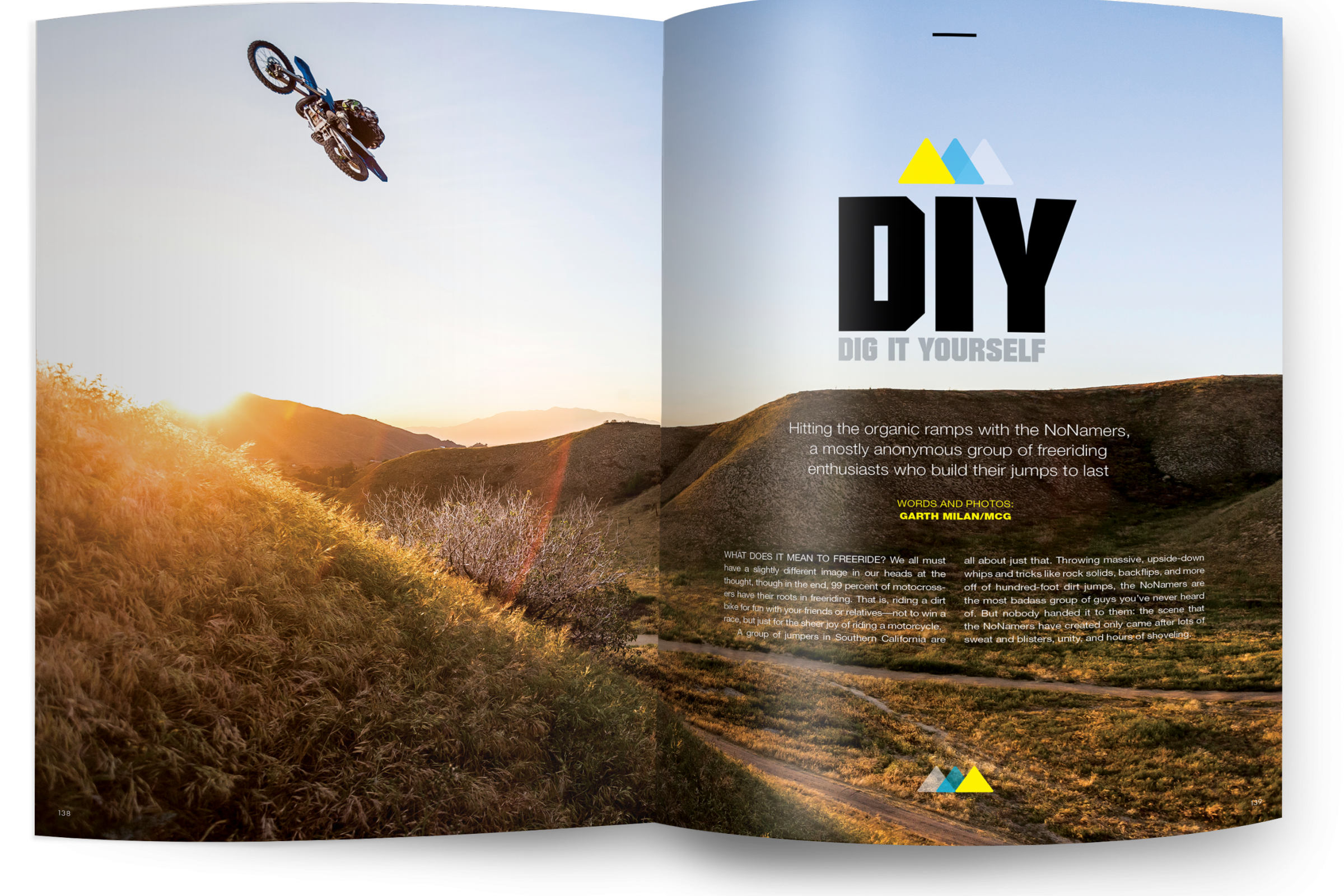 In the Mag, Who Are the NoNamers?

I’ve always looked up to dirt jump builders in the BMX world. It’s not that motocrossers don’t build beautiful jumps and/or tracks, but typically these mounds of gorgeous dirt are shaped up with the help of gigantic earth movers, tractors, and water trucks, all in the cozy confines of a gated, private property. However, just as washing air filters and changing oil are part of the daily grind for us, poaching illegal trail areas armed only with shovels and buckets of water is the norm for BMX builders, and they all take great pride in sculpting perfect, manicured lips and landings that look more like art than piles of dirt when finished.

After shooting freestyle motocross for the better part of the last two decades, I have always felt a bit underwhelmed by the hand-sculpted lips I’ve come across while shooting in the hills. Most are built to endure an afternoon’s session at most, and hastily thrown together while the dirt is drying after a big storm and the boys are itching to ride.

But none of this applies to Vinnie Carbone or his crew of riding buddies, the NoNamers. Similar to BMX builders, the jumps these guys sculpt are made for the long haul, and when they are done perfecting them, the hits truly are works of art that can be sessioned over and over again.

Having seen some of the jumps that these guys were hand-building out in the hills of SoCal on social media like Instagram, I was anxious to speak with Vinnie and find out not only his motivation for all the hard work he and his friends put in, but also just how much hard work went into the construction of these pristine jumps.

Getting in touch with Vinnie was actually quite easy; a quick direct message on Instagram was all it took, and next thing I knew, I was out in the hills shooting the same jumps I had only seen on social media prior. The hard part was juggling both of our schedules, along with a drier-than-called-for El Nino weather season that left us with far less rain than we had hoped for. Between waiting on upcoming storms to provide much-needed moisture to the surrounding hills, and my ridiculous shooting schedule, the deadline for the feature came and went. Luckily, Vinnie and his friends were able to put in some time perfecting the jumps at the last minute, and after spending a couple of days shooting and interviewing him, the feature came together perfectly, just past our original deadline time.

When the dust settled, I think we truly captured the heart, soul, and dedication to riding that Vinnie and his friends all share. Some of the jumps, including a completely hand-built quarterpipe, took hundreds of collective man-hours to build, but Carbone and his buddies will be quick to tell you that every drop of sweat was worth it when they are enjoying the fruits of their labor. Check out the “Dig It Yourself” feature in the July ‘16 Racer X Illustrated to be inspired by the NoNamers’ hard work.