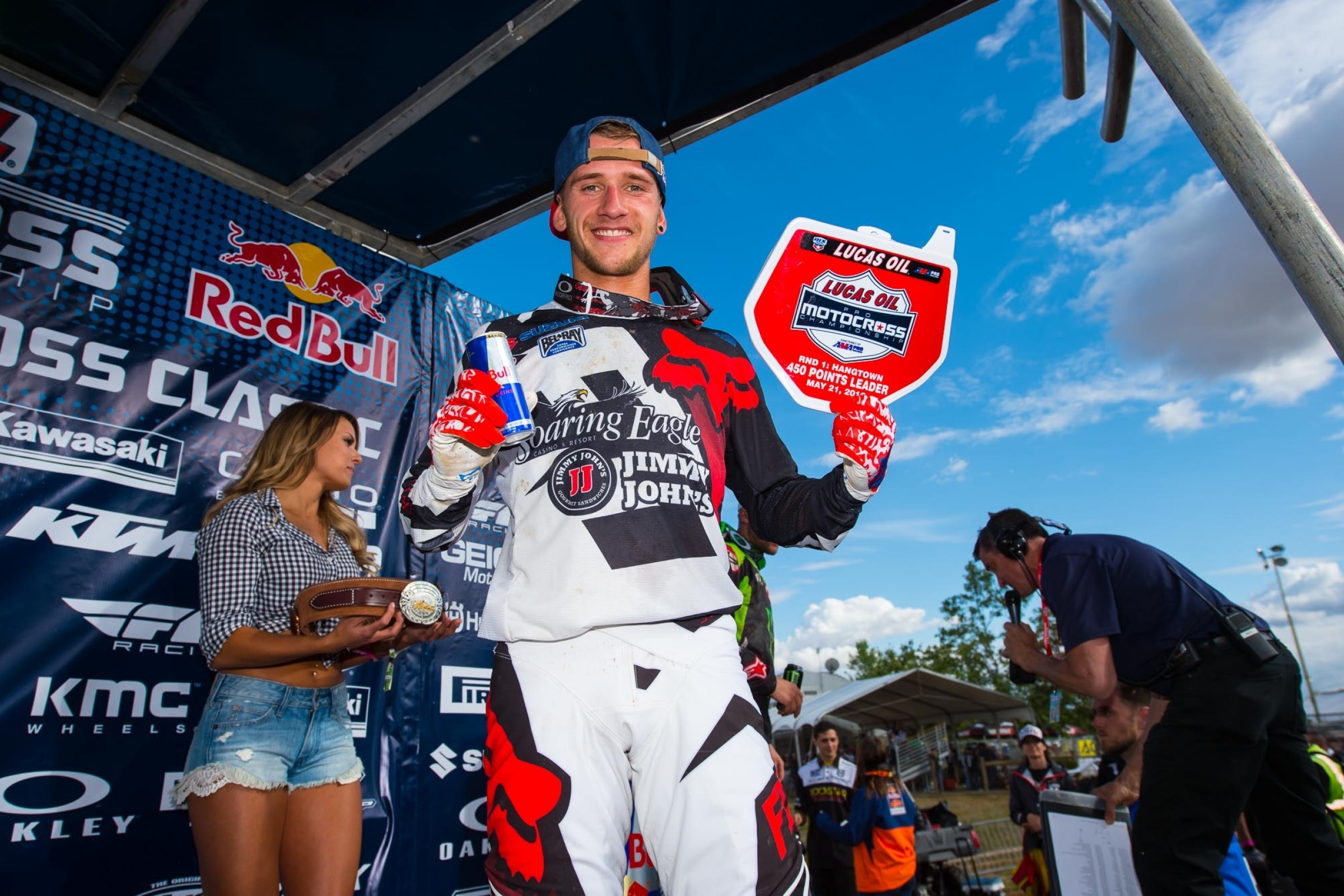 What a difference a year makes! Last year Ken Roczen struggled at Hangtown due to a back injury he suffered not long before the opener, but this year was a completely different story. Roczen took firm command at the GoPro Hangtown Classic, passing into the lead and thoroughly trouncing the competition in both motos at the Lucas Oil Pro Motocross opener.

Here’s what he had to say about it in the press conference immediately afterward.

Racer X: Outstanding day for you. Take us through it.
Ken Roczen: It was good. We’re in a way better position now than we were last year, especially coming in with that injury. That’s all behind us now and I’m pretty happy with the bike and the way me and the team are working together. I can focus on my riding now and it makes a big difference. I’ve always done well at Hangtown, but today was very different than it usually is. The track was a lot harder than it normally is, and I think it was prepped differently because of possible rain coming in. It got pretty slippery there in the second moto. Obviously it gets rough and stuff, but it was also very notchy and hard in certain spots. That made it different. It’s good to get the first one out of the way. It’s always tough coming in here and we only had one weekend off. It’s a new season and everybody has a chance at another title, and for the whole season, I want to bring it every single weekend. Last year I was playing catchup the whole time and we were in a bad place. But now I feel like I can go from weekend to weekend and progress with my riding. It’s going to be a hard battle and it’s only the first race, but I’m super happy I put myself in a good position. But like I said, it’s a long year and there’s going to be a lot of good racing.

You won a championship before so it’s not a surprise that you’re winning, but were you surprised with how it went today?
I don’t know if surprised is the best word. I think everybody, coming into this race, has an empty mind. Sometimes you can feel great and you get smoked, or the other way around, where you don’t feel that great and you win. I think everyone is going to get better from here on out. It was the first race and there are a lot of jitters. It’s not that I surprised myself, but I am very positive about today. It’s good to take that momentum, especially right off the start instead of being way back in points like I was last year.

Does this type of riding aggravate your back at all?
Every once in a while it’ll bug me a little bit, but it can’t get any worse. The fracture is there and people live with it their whole lives.

Is there anything about your riding style that puts you ahead of Ryan Dungey here? He’s never won here.
I don’t know. I think a good rider has to be good on any soil. I would say I’m solid no matter what dirt I ride on. It just happens to be that we come here and I find myself in first and he was in second. Or like Eli [Tomac] last year. It doesn’t necessarily mean anything. We have a lot of racing left and we don’t know what’s going to happen in the next few races.

Normally this track is rougher but it was prepped differently because of the threat of rain. Talk about the differences.
I think last night, or this morning, whenever it was, they sealed the track pretty good. You never know, if a bad storm is coming in it can rain pretty heavy. In Indiana one year they ripped it really deep and it got swamped and it was almost unridable. So I think they tried to be smart about it and obviously we got really lucky with the weather. It will always get rough just because of how many riders are out there. It seems like at a certain point the bumps aren’t necessarily getting bigger but the dirt is getting harder. Sometimes it makes it uncomfortable for us. We often have a little stiffer suspension setting because we’re not used to riding really hard tracks because most of the time we go to Nationals and it’s ripped really deep. Some of the parts got really dry and that got tough--with two laps to go I almost crashed on a downhill. I hit a back kicker and almost went over the bars. It had no give because it was hard. There’s a bump there and you’re not going to move that bump.

There was a jump in improvement for you in the second half of supercross. Were there any changes you made then that translate to what you’re doing now?
I’ve talked about it maybe ten times lately. It was more of a minor change that we made, and it really has nothing to do with outdoors. I’ve been fit all year and I’ve been riding well all year but it just seemed like there was something missing on the bike. When we made the change it allowed me to put the bike where I want to put it.

In that first moto you built a gap before Dungey got into second, but you passed him and walked away in the second. Does that give you any type of a mental boost?
Both motos were pretty much the same, and in the first moto I was actually behind him too. I don’t know how or what I did, but I made some moves and found myself right at the front pretty quickly. The second moto was the same way and I actually didn’t think I was riding that good in the middle. Then toward the end I switched up my lines a lot. I was able to keep my momentum a lot more, which helped me out with my riding. Overall it helped me pick up some speed.