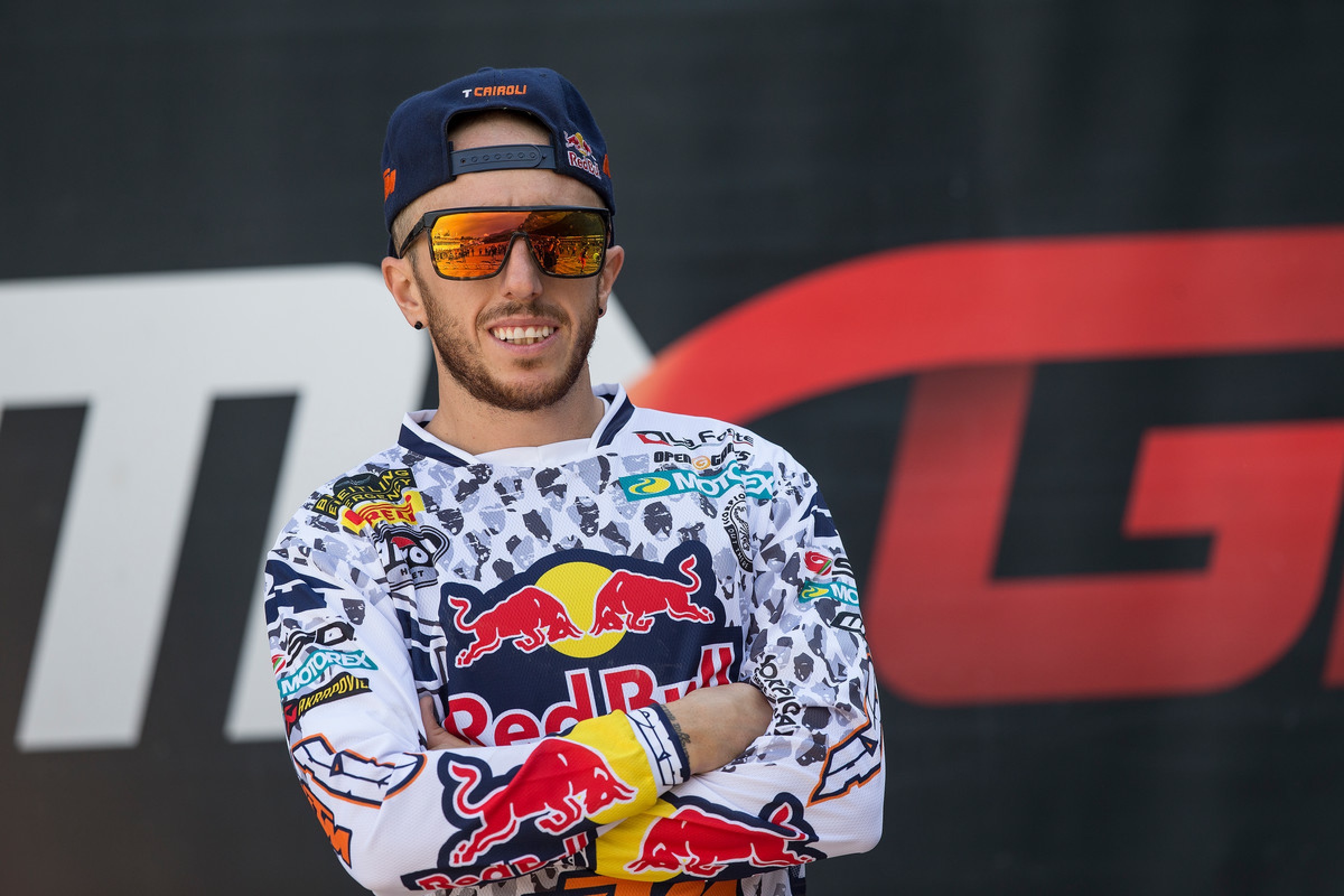 Red Bull KTM’s Tony Cairoli was cautious about talking-up his chances on home soil for what was the eighth round of eighteen in the MXGP series and third racing weekend in a row. The Sicilian notched a first triumph in a year the previous Sunday in Germany and stated that his resurgence to the top of the Grand Prix pile—now a raging hunting ground for energetic and fearless rookies it would seem—was very much a work in progress.

The crowd that packed into the Pietramurata circuit in Arco di Trento, one of the most stunningly set locations on the calendar and within a stone’s throw of Lake Garda, were entirely appreciative of 222’s ability to again nail effective starts and go 1-2 for a second win in succession. A pocket of public was not so satisfied. Trentino had seen a hefty gathering of Slovenians make the relatively short hop across the border in support of MXGP series leader Tim Gajser for the last three years (it is now four that the Trentino region has hosted a stop on the Grand Prix trail) and they saw their hero crash from a certain second moto twenty-five pointer and embark on (another) recovery to fourth that meant yet another podium for the 19-year-old HRC star but no repeat of his maiden GP spoils in MX2 at Arco only twelve months previously.

Northern Italy was battered by thunderstorms that turned a dry event on Saturday morning into a mudder for qualification. Thankfully the climate did not reverse again across the meeting and the dowsing of the track actually helped slow and roughen the stony hard-pack. This is the course where Ryan Villopoto infamously looped his way into retirement and where some of the braking and acceleration bumps can be some of the sharpest and trickiest on the calendar. The rain created deeper ruts and embellished line choices but the narrow layout still meant that overtaking often involved a touch of plastic.

Cairoli, Romain Febvre, Evgeny Bobryshev and Jeremy Van Horebeek along with the enraged Gajser provided some excellent entertainment in the second moto. Cairoli could not hold on for a second 1-1 in seven days and it was Febvre who blasted to the front and back onto the podium after missing out in Teutschenthal. In the first moto the defending world champion was again picking the Yamaha out of the soil after becoming entangled in the problematic first turn. He would fall again and need to plot a course up to sixth by the chequered flag. Gajser’s 4-4—a second moto pass on Van Horebeek on the last lap—meant he squeezed onto the podium again by one point in front of the much improved Team Suzuki’s Kevin Strijbos. Rockstar Husqvarna’s Max Nagl had threatened Cairoli in a static first race (in comparison) but the German fouled-up his second start to the degree that he dropped to fifth overall.

Snippets of form and indefinable speed here-and-there in Italy and at a meeting where dots of fatigue were hitting MXGP after working across the length of Europe in three weeks were still no match for Cairoli’s consistency and the former champion is starting to close on the battle for the title. Just four points separate Gajser and Febvre at the peak of the standings and the KTM man is one moto win (25 points) from a long overdue reunion with the red background for his number.

“It is always very difficult to win in your own country,” he said afterwards. “This is not one of my favourite tracks because I always struggle on this type [of dirt]…but I am gaining confidence and feeling with the bike. I know I am missing some speed on the first laps and Tim was pulling away [in the second moto]. I’m working on that and Romain was pushing, pushing as well. He was just faster on some sections. The red plate is my goal for sure.”

Round nine travels to Talavera de la Reina in Spain; ominously the scene of Cairoli’s first win on the 450 last summer.

MXGP welcomed back two more French athletes in the form of HRC’s Gautier Paulin and Monster Energy Kawasaki’s Jordi Tixier. The former has been dealing with a muscle problem sustained through his effort to return from a fractured rib and vertebra and another crash in the first moto forced an early boot-clean. Paulin was an encouraging sight back near the front in the second race and although his future for 2017 would seem to be up in the air it is hard not to imagine Paulin having a role to play in the destination of the ’16 title dispute in the rounds to come. Tixier was making his long-awaited debut in MXGP on the works KX450F after needing additional surgery to mend his wrist break from late summer 2015. The ex-MX2 champion will obviously need more race mileage but his eleventh overall here hinted at some potential.

Exercising a degree of caution with a sore foot—courtesy of what he believed were the germs of a conspiracy to stop him winning in Germany—Red Bull KTM’s Jeffrey Herlings left it extremely late to challenge and ultimately lose his perfect record to Monster Energy Kawasaki’s Dylan Ferrandis in the first MX2 moto. The Star Yamaha-bound-racer-for-2017 had already raised an eyebrow on Saturday by alleviating Herlings of his Pole Position streak and his speed and tough repost to Herlings’s bid to snatch victory in the final laps was the bump-down-to-earth the sensational Dutchman had been missing after a dream opening to 2016. The KTM man tried damn hard even up to the last corner but Ferrandis was resolute and was only the second rider this season to see the Monster bridge flames as winner.

Herlings, who admitted he had been on antibiotics during the week to recover from a virus he contracted prior to the German GP and was on the brink of calling KTM Race Director Pit Beirer to miss the event in Arco due to his ankle ailment, was in no mood for games in the second moto. His perfect status scrubbed, Herlings was quick to keep his run of Grand Prix victories intact and is now up to eight.

“I came here to see what I can do and took painkillers to get through it,” he said. “It was a tough track and tough circumstances with the weather. Luckily I had three good starts this weekend and had a good battle with Dylan in the first moto. I was a bit scared of catching my ankle on the ground. We went back and forwards and had a really good race. In the second moto I just wanted to do my own thing.”

Ferrandis raised his own stock thanks to his part in the best spectacle in MX2 this year and resumption of the very first duel between the riders in the opening moto of the season in Qatar. A week later in Thailand, Ferrandis would be counted out of the bigger picture with a damaged shoulder that sidelined him for four events. Herlings’ teammate Pauls Jonass found some form and improving fitness with third overall. Suzuki’s Jeremy Seewer suffered through a combination of starts and crashes that banished the impressive Swiss away from the podium for the first time in six grands prix and down to fifth. Full props to TM’s Samuele Bernardini who has been gaining attention for some fantastic starts and decent staying power among the leading group. The young Italian posted a career-best on home turf with fourth overall.

Finally a small breather for MXGP this week before a Spanish-French double at Talavera and then St Jean D’Angely and two more hard-pack tests ahead.