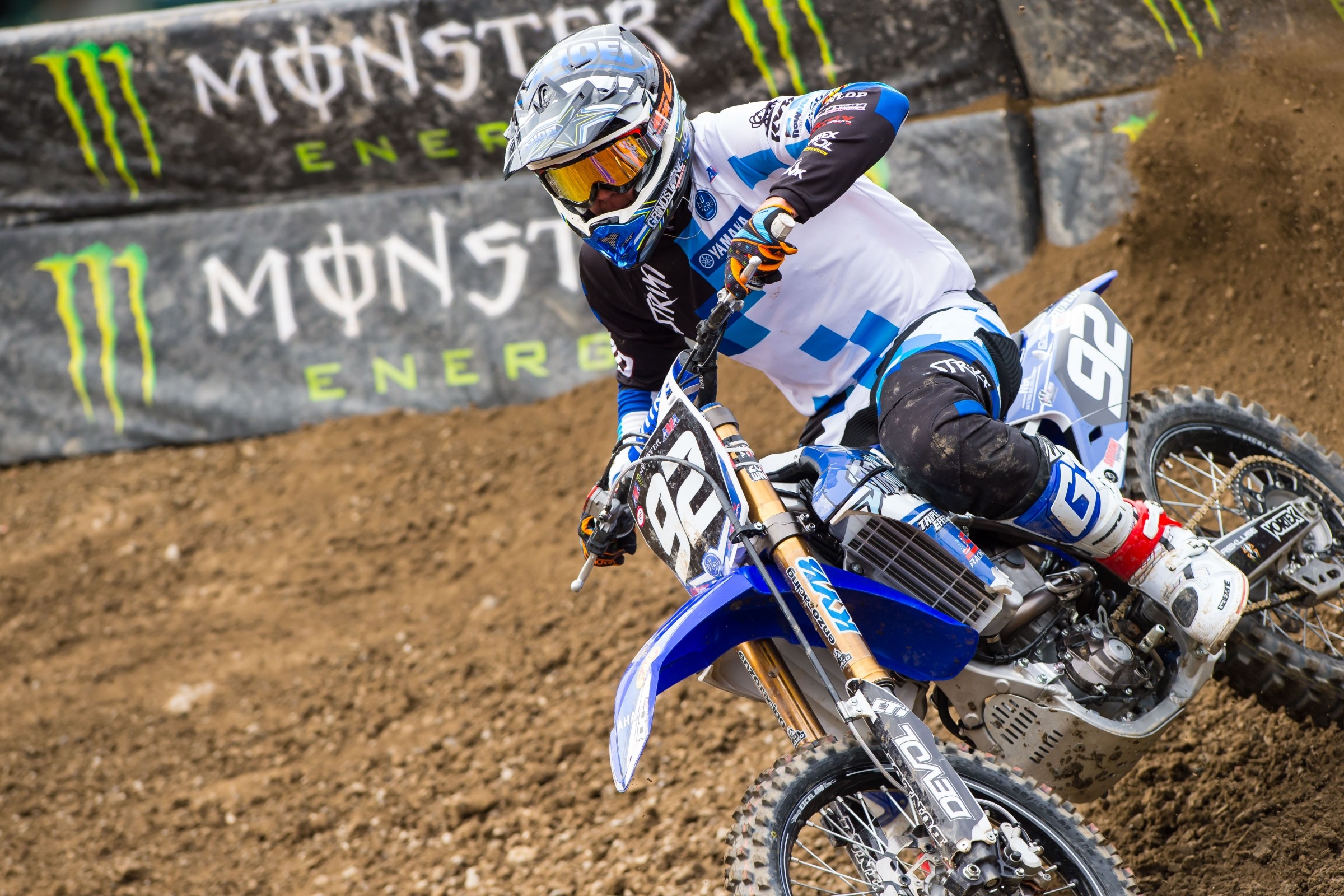 Idaho isn’t a state that’s been known to pump out a lot of motocross talent over the years. Then again, neither was Minnesota (besides the late great Donny Schmitt), until the last eight years or so. However, don’t sleep on Idaho! The potato state has two riders who have been making some noise on the circuit. One of course is Jimmy John’s/Soaring Eagle/RCH Suzuki’s Jake Weimer, while the other is a somewhat new face in 20-year-old Ryan Breece.

Breece wasn’t actually planning on racing professional motocross until he won his 250C Stock title at Loretta Lynn’s in 2010. The original plan was to play college football at Boise State as a middle linebacker.

In 2014 Breece had made big improvements in his riding. He gained some great support from local sponsors and he devoted all of the time he used to spend on football on moto. He cut a lot of weight in the process too. In 2015 Breece’s name started popping up on the lineup of the 250SX West Region races, with his best finish a fourteenth.

This past weekend was a busy one for Breece. He raced both the Arenacross and Arenacross Lites class in Amsoil Arenacross on Friday night and then raced Monster Energy Supercross on Saturday. We caught up with him on Monday to find out more about his past and his iron-man effort in Las Vegas.

I bet you are after the weekend you just had. You raced arenacross and supercross in the same weekend. You’re crazy.
It was such a gnarly weekend; my hands are so toast! Last year I did the AX Lites main event and I only raced the first four laps in the AX class. I had to pull off because I was too winded. This year I raced four main events in two days! It was a crazy weekend.

What’s cool about this is the fact that you won the AX Lites main event last year and then you were able to do that again this year. This year you were able to get into the top ten in the AX class too.
Yeah, I was able to get into the top ten. Unfortunately I had to start in the second row for both of those AX main events. It was hard to get a start, but after a few laps the carnage was out of the way. I was able to pass some guys and I battled with them.

You went from the tight confines of arenacross into a mudfest in about 24 hours. How hard was the adjustment?
It’s hard to transition with the racing, especially on back-to-back nights. That’s what we train for though, right? It took me an hour to wash my bike it was so muddy.

Was last year the first time you dabbled in arenacross racing?
Yeah, last year I did two rounds of arenacross just to get my name out there. I want to do as much racing as I possibly can. I’m tired of doing everything on my own. So I was thinking about making a name for myself there.

Then you moved onto supercross and had some decent showings. That’s when your name started showing up a lot more.
Last year I had a supercross only deal. I got injured at Anaheim 2 and I took a few weeks off. I came back at Santa Clara and finished 17th in the main event there. I hadn’t done much racing to that point, so I tried arenacross. I wasn’t able to podium, but I got my name out there. In supercross 14th was my best finish last year. That finish was pretty good for privateer status.

It’s hard to get in the mix with the big teams like GEICO Honda, Star Yamaha, Pro Circuit Kawasaki, and the smaller teams.
We have a comparable bike to some of the factory bikes, but you know they have some good motors behind them. I’m not able to get the funding together to have that type of bike. My motor builder Dan Crower does a great job and it’s working.

I put together my entire program. I was able to get the Strikt Racing team to help transport my bike to the races. I had to add my own sponsors, but a couple sponsors came from the team, which helped out a bunch.It’s been a long journey, but I’m excited to keep it going.

Were you not able to do the outdoors due to another injury or was that more of a funding issue?
No, it wasn’t a funding issue. I got a little bit of support to do the first three rounds. I got injured at the Colorado National, which took me out about six months. I headed over to Germany to race for a Honda team and did pretty well over there. I came back and started training for supercross, but then I broke the pins in my ankle. I had to get surgery and it was a struggle to get back.

Man, you’ve been busy! You’re originally from Idaho?
Yeah, I’m from way up north in Coeur D’Alene. It’s a small town with a great view.

I guess it’s just yourself and Jake Weimer representing Idaho on the circuit right now.
It’s cool! I actually have a Weimer jersey in my room. I’ve been a fan since way back. He came up to a race in northern Idaho and I saw him up there. He was heading to Loretta’s on his Suzuki at the time. It was cool getting to meet him and seeing how his program worked. I followed in the guy’s footsteps.

If he reads this interview then you probably just made him feel really old.
[Laughs] No kidding, huh?

Yeah, a Weimer Suzuki amateur jersey is hard to come by these days.
It’s cool to see him back on them though! I give props to the guy. I know he works hard. I follow him on every social media site. I don’t know if he knows about me, but it’s been cool to see him progress throughout the years. I definitely want to follow in his footsteps. He set a good example to a lot of young riders.

How did you end up in California?
That’s the biggest trouble living in Idaho, there isn’t a place to ride. I was able to move down to southern California to the Grindstone Compound. I’ve been staying down here and training so I can get on a team.

Have you been in talks with any of the teams yet?
At this point not really, I’ve talked to a few people while getting ready for the outdoors. I’m really just trying to get on the bike as much as I can.

Are you interested in racing other places, like Canada for example?
Honestly, anything that keeps me on the bike I’m down for. I just love racing! Where I live in Idaho the Canadian border is only about forty-five minutes away from me. Canada definitely interests me, but I’ve never been there before. I’ve seen a lot of the tracks up there and it seems interesting. I’d definitely like to do that. It seems like every year that a privateer continues on with the circuit that they get better support each season.

Do you feel like that’s how it’s been for you?
Each year is a progression. The way my program worked for supercross is that I had a small shop called St. Marie's Cycle. They gave me a couple of demo bikes for the year. I was able to have a couple of bikes and then my motor guy Crower hooked them up. It was light on the funding if you know what I mean. I don’t know when I have to take the bikes back. I’m just thankful for them to allow me to have the bikes that I have. They work really well with me and everybody at the shop is really helpful. If I need something they will get it done for me.

You said you were laying low today. Are you doing anything fun?
Not really. I might head over to the beach and watch the sunset. It’s so peaceful. I have to wash a few bikes. I’m watching some supercross.

What do you like to do in your spare time?
I do a little bit of surfing. I head over to Cape Clemente and surf some waves. When I’m home I just hop in the boat and wakeboard or ski whenever I can. Idaho is a lake state so it has great views and a lot of water. My dad has a couple of jet skis that I like to cruise around on. I just enjoy the time.