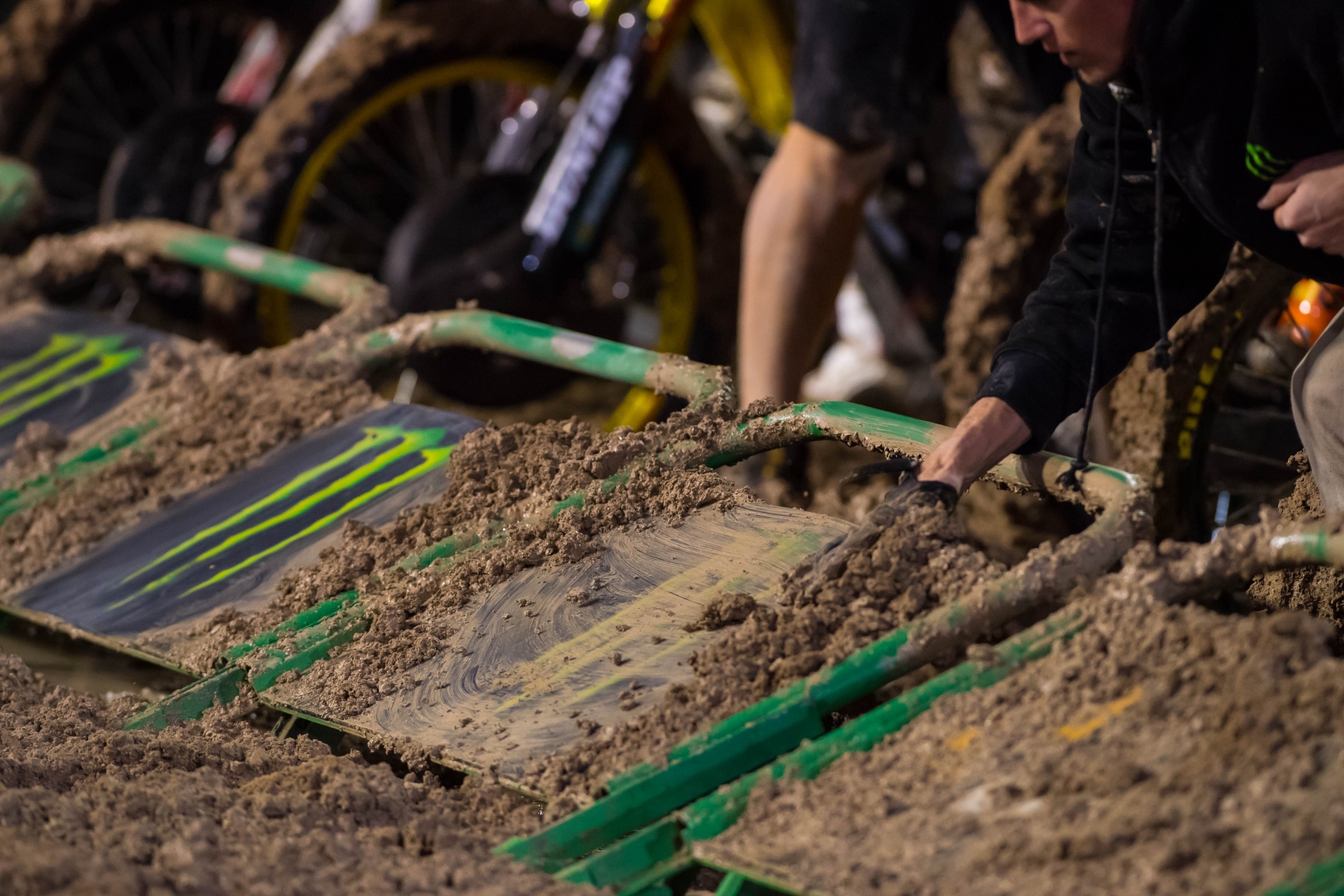 Was this the best we’ve ever seen Ryan Dungey? The stats say so. With an even deeper field (Roczen, Tomac, Anderson, Reed raced every round) Dungey eclipsed nearly every statistical category from his 2015 championship season. It’s also worth noting how close those these stats are, which underscores Dungey’s robotic consistency over these last two seasons. This year he scored more points (391 to 390), had a better points percentage (92% to 91.76%), had more wins (9 to 8), and led more laps (172 to 148). The only statistic where he dropped off was heat race wins (9 to 12). This season also marked the second consecutive where he podiumed in 16 of 17 rounds.

Ryan being Ryan, he’s left no stones unturned in his program, and told Racer X after the race that he and Jason Anderson actually practice in the mud at Baker’s Factory in Florida.

“Mud doesn’t come easy to me, either,” said Dungey. “We’ve been working in it. We’ve been riding in it more the last couple years of my career because I know it’s a weakness of mine. But it was cool to be able to win a mud race. It’s been a while.”

Anderson reiterated: “[When it’s muddy] Dungey is always the one that wants to suit up and ride,” said Anderson. “If it’s muddy I’m thinking, we’re going to have to sit on the couch today. But if he’s out there, I’m doing it. I can’t be the one left out.”

On this night it helped, with Vegas seeing an unusual amount of rain. Most of the area received .010 inches on Saturday, which is a lot considering the city only gets about 4.19 inches of rain a year. But there was much more than .010 inches on Saturday at the track, as a huge dark cloud hung over the stadium all day (insert your favorite bad luck joke here. Yes we saw Filthy Phil Nicoletti in the pits, too). Our man Matthes lives in Las Vegas, but his wife said it wasn’t even raining at their house when the track was getting pummeled by huge drops. The weather made for an extremely muddy track, and despite there only being pride and bonus money on the line, Dungey pushed hard to capture his ninth win of the season—the most in a single season in his career .

Ken Roczen, coming off consecutive wins in Foxborough and East Rutherford, was looking for his third straight victory, and even briefly took the lead from Dungey before crashing shortly after—even taking Dungey down with him. “Unfortunately, I hit the wrong rut and went down,” he said in a team statement. “After that, my bike was really bent up and we couldn’t get it straightened out so we had to call it a day.”

The Dungey/Roczen—or should we say Captain America/Iron Man—rivalry now moves to Lucas Oil Pro Motocross. “I’m healthy and ready for the outdoor season,” said Roczen. “I’m super-happy with the 2016 supercross season, especially with how consistent we were over the last third of the schedule. Me and the team are really looking forward to the 2016 Lucas Oil Pro Motocross season.”

For the first time since the 2014 season, Trey Canard failed to reach the podium in Monster Energy Supercross. Canard missed all but five rounds in 2014 and when he did return he averaged a 5.6 finish. This year, Canard missed just two rounds. Speed wasn’t a factor, Canard still had plenty of it, but with just five top five finishes, the Oklahoman is ready to get to outdoors. “I think the whole Dirt Wurx crew did an awesome job getting the track fixed up enough to allow us to ride. The track was dangerous though, so I’m just happy to come out safe,” he said in a team statement. “That’s the bright side but I’m still disappointed, and I’m happy supercross is over. It’s been a tough season so I kind of just want to turn the page and move forward.”

After a strong podium last weekend, the mud did in Cole Seely this time. “I’m definitely not happy with tonight’s result,” he said in a team statement. “That’s not how I wanted to finish the season. The track conditions were horrible and it was really just about survival throughout the race. I never got totally comfortable; I fell once and was just fighting the track. Honestly, after seeing what happened to Dan while sitting on the starting line, I wasn’t into it. I’m really happy he’s okay considering how bad it looked. I’m definitely setting my sights on outdoors now."

You know who else is ready to go outside? Justin Barcia. We talked to Monster Energy/Autotrader JGR team manager Jeremy Albrecht about it and he said the whole team isn’t sure what’s happening to Barcia, he is riding very well during the week but isn’t showing it on weekends. We also talked to Barcia and he basically said it really sucks having to come back mid-season from injury two years in a row, and he hopes everything turns around at the Nationals. His finishes since coming back from a thumb injury in supercross were 16-15-11-19-15-10.

“Another season that I have to look past and forget about... Injuries have put me in a challenging spot mentally and physically two years in a row... I wasn't ready to come back last year in sx and mentally wasn't ready to come back this year for me it would of been best to get ready for Mx all spring but things aren't always that easy... I'm very excited for motocross happy healthy,” Barcia said on Instagram.

Weston Peick finished a disappointing second season with JGR with a crash filled night that saw him out of the main event. Following his two-race suspension at the opener, Peick crashed hard in Oakland and sustained a arm injury and was never fully healthy. “Well that was a tough outing to the last Sx race of the season went down and messed up my wrist and wasn't able to continue racing. Nothing broken just sore, looking forward to having a solid outdoors,” he wrote on Instagram.

Better late than never! Broc Tickle always excels in tough, rutted, muddy conditions and this was no different, as he logged a season-best sixth. His previous best during an injury-shortened season was 11th at Anaheim 1.  “It went pretty well for me,” explained Tickle. “We had a big storm come in right as practice was ending so I knew it was going to be important to run the main event without crashing and to be as smooth as possible and minimize the mistakes. I’m normally pretty good in those situations. I qualified out of the semi and made some passes early in the main event so I was happy about that. I had some guys go down in front of me and ended up sixth. With the conditions as bad as they were, it seemed like the track was a lot like a motocross track so, for me, it was good.”

BTOSports.com-WPS KTM had a three-bike team running in Las Vegas, the first time they’ve had that since Andrew Short went out for the season in Atlanta. Davi Millsaps was back and told us he felt tight, rusty and just generally bad after missing nine races with rib/lung injuries, but he looked darned fast by clocking eighth-fastest in practice. He was up front in a main before a crash did him in. Benny Bloss made the main and finished 19th. Justin Brayton had a big crash in practice and wasn’t feeling well, but he gutted the night out with an LCQ win and rallied to seventh in the main. The Iowa native had a bounce back season in his second year with the team. Although he fell short of his podium goals, Brayton finished outside of the top ten just three times.

Marvin Musquin crashed while running top five and was forced out of the main shortly after with bike problems. We asked Roger Decoster what happened to Marvin and got the usual blunt answer from The Man: “I think he gave up.”

Finally, a tip of the cap to Nick Schmidt. The Fly Racing/TPJ Suzuki rider made 16 of 17 main events (missed Anaheim 1) in a very deep field and tied a season-high with a sixteenth in Las Vegas.

Riders were flirting with the 1:02 mark in practice when it was dry, and Barcia had the 22nd fastest time with a 1:08. Look at how much time the mud added to the top 22 times in the main.

How fast was Aaron Plessinger in the mud? When made a stop in the mechanics’ area on the second lap after an early crash, he was in 19th place. Besides one lap in the 1:30s, he then proceeded to reel off laps in the 1:24 to 1:25 range on laps 5-12, save for the last two laps where he ran a 1:23 and a 1:22! In comparison, Stewart, trying to stay safe with the title locked up, was running in the 1:30 range for a few laps, and race leader Joey Savatgy also ran five of his last six laps over the 1:30 mark. The dudes up front were playing it safe, but kudos to Plessinger for never giving up.

Also fast was APless’ teammate Jeremy Martin. He went down in turn one and was buried in the muck seemingly forever, and then he crashed again for good measure on the first lap. His laps weren’t as consistently fast as Plessinger (he also spent some time stuck behind teammate Cooper Webb, trying to unlap himself while not upsetting Webb’s title run) but he did log the fastest lap of the race on the final lap, hitting 1:21. JMart’s 1:28 average lap is fast because it doesn’t account for the first lap of the race, when he was down twice, and Plessinger’s super-fast 1:25 average is helped by the fact that the AMA doesn’t not count crash or mechanic’s area laps into the average.

How bad was the track? Let RJ Hampshire tell you: “Main event was the gnarliest track I’ve even ridden in my life.” He finished 16th. “I think I had four crashes, just tried to finish the race. So glad to be healthy.”

Or let Jimmy Decotis tell you: “It was insane,” said Decotis, who finished 19th. “Heat race was pretty tricky but the main event was like nothing I’ve ever ridden—one of the hardest tracks I’ve ever ridden.” And this dude grew up racing in New England!

Jordon Smith had a trying night, he crashed in the first turn of his heat race, got run over, and tweaked a rib. He tried to gut out the main event but failed to finish—he will be back for the Nationals, though.

Savatgy won it for Monster Energy/Pro Circuit Kawasaki, and his teammate Gannon Audette logged another strong ride with a fifth. Tyler Bowers and Chris Alldredge were putting in good rides too—but it all broke loose on the last lap. First, Alldredge crashed badly on the last lap. We hear he has injured his leg/hip, which is terrible. Look for a further update on him later this week.

Only a few moments later, Tyler Bowers was trying to hold off Christian Craig in a race to the finish (for seventh). He held Craig off but then got sideways on the slippery top of the finishline jump, and his KX250F went flying off the bridge…and onto Team Honda HRC team manager Dan Betley, who was standing beside the jump. It was a scary moment but we saw Betley walk away a few minutes later. Total damage to Betley was six stitches in his arm, a big bump on the head and some bad scrapes. “It was a strange day with plenty of drama, including a little for myself!” said Betley in a Team Honda press release.