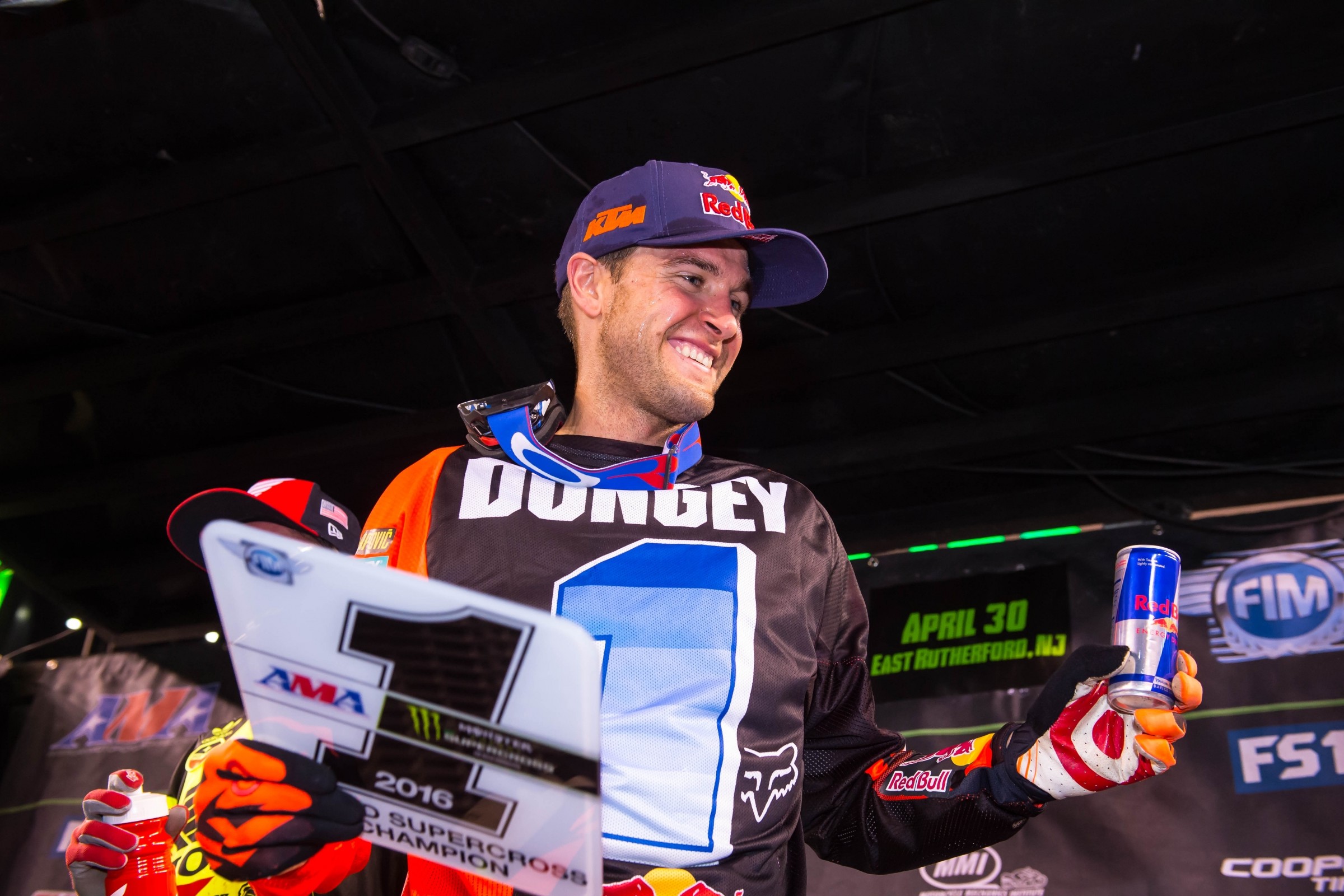 Redux Being the Man

If there’s one cool thing about KTM’s electric start, it’s that it makes for a neat party trick. About an after the podium had cleared at MetLife Stadium, the KTM folks had retreated into their pits, which consists of two semi-trucks and Ryan Dungey’s motorhome. The party had begun, but the music choice was rather atypical.

I didn’t hear any music! Just factory 450SX-Fs cranked over in neutral and twisted to the rev limiter over and over. That music rang out loudly until Dungey hopped on his bike and turned the volume up with a big burnout. The regular Red Bull KTM U.S. racing personnel was on hand, including the team mechanics, technicians and managers, as well as some of the folks from the Troy Lee Designs KTM team, Aldon Baker and training mates Marvin Musquin and Jason Anderson, Dungey’s parents and wife, all the big KTM brass from Europe, and assorted fans who decided to search for autographs past 11 p.m. They were in for a treat.

That burnout wasn’t enough. Dungey and Musquin’s bikes kept getting cranked over and panic revved in a sound of celebration. Dungey’s bike came back out from under the tent, the front tire was wedged against the tailgate of one of the trucks, and Roger DeCoster (!) jumped on, smoked the tire and went through the gears until the back tire was completely gone.

A few mechanics went to work installing a fresh rear wheel in case another burnout needed to happen, and while this commotion was going on, someone grabbed Dungey, lifted him up, and dragged him under the tent while the crowd chanted “Speech! Speech! Speech!” Dungey looked reluctant to draw that kind of attention, plus his five years of success with the brand, and especially the last 18 months, have been rife with victory speeches on the podium.

But what’s one more?

As usual, team truck driver Don Baynes, a former Marine, led the charge from the side door of the semi. Bayne organizes quite a few team unity sessions, always ending with the Marine cry of “Oooh-Rah.” He had already brought the team through that on the podium with the number-one plate earlier. This time he set the scene and let Dungey have the floor.

Dungey said some great things, most of the stuff you’ve heard before. He thanked DeCoster for taking a chance on him coming out of the amateurs—in the Suzuki days—laughing that it was “because of my corner speed” which is now what the legend says. He thanked everyone he could….then the panic revving began again.

As Dungey made each point, someone would hit the starter button, yank the throttle and salute with another trip to 12,000 RPM or so. It was like all those political rallies you see on TV right now, only instead of applause after each “I promise to rebuild this economy and get everyone a job!” followed by cheers, it was “I can’t thank this team enough for working so hard!” followed by another electric start and a panic rev.

He’s riding at an all-time level, and promoting even above that. That might be the biggest load anyone has ever carried in this sport, and just three weeks from now they’ll all start at zero and come back after him again in Lucas Oil Pro Motocross

The vibe was really building. The masses demanded a DeCoster speech. Then Dungey’s mechanic, Carlos Rivera, who punctuated it all by saying back-to-back was good, but he wants a three-peat (a big series of panic revs followed that one!). Even KTM’s CEO Stefan Pierer got in on it to thank everyone, and give a brief synopsis of how KTM rose to where it is now. A panic rev followed. I don’t know how many CEOs of other brands would go to a supercross, let alone hang out in the pits with a team shirt and jacket.

The vibe was certainly fun but I eventually had to leave—Saturday nights are work nights for me. I did ask Aldon Baker if Dungey was going to get a grace period on the racing diet. Maybe a championship cake?

“Man, why does everyone always have to put sugar on top of it?” Aldon said with a smile. “This is sweet enough!”

It’s easy to enjoy the vibe at any championship celebration. Monster Energy Kawasaki had no shortage of fun when Ryan Villopoto was reeling off four straight, although by the end Villopoto himself was looking more relieved than elated. For Dungey, I could see 2017 shaping up as a nice anniversary year. His first full pro season was 2007, so there’s a little tie-in to having a career of about 10 years. Villopoto’s first full season was 2006, he made it to 2015 (kind of). Ricky Carmichael went 1997 to 2007. Will Dungey press on beyond next year? Maybe it depends on how much he likes to eat cake.

For now he sure seems okay without it. None of the things that normally trap riders at the top seem to get to Ryan Dungey. He’s not walking around on surgically repaired body parts, he’s okay with the training, and his family unit is more solid than ever. But finally on the podium on Saturday, he let a little bit out. He finally admitted that the pressure of holding that red plate and never getting to have a bad race—yes, logging 31-straight podium finishes in supercross—can wear even on him. For Dungey or anyone at the top, success isn’t really about any one individual race weekend or even any one particular championship. This is more akin to keeping the number-one ranking the same way NCAA college football. Any loss gets magnified; any bad day or night looms large. Plus, every competitor comes at you with full force, but also free of the championship pressure. If they beat him, even once, they’ve conquered the world. If Dungey wins, it’s just another expected victory. He can’t afford to crash out of a race or have a bad weekend because he has a points lead to maintain. Everyone else can absorb a few bad nights and walk away without answering for it.

Just as an example, Ken Roczen’s last seven races include three wins and three close seconds behind Dungey—and one strange dud in Detroit, where he finished sixth. He got to just shrug his shoulders and quietly file that one away. Dungey finished fourth over the weekend and multiple theories emerged as to why.

This isn’t a role saved for Dungey; it’s the spot every leader of the sport falls into. For the last 15 months, Dungey hasn’t just been Monster Energy Supercross or Lucas Oil Pro Motocross Champion, he’s been something bigger than that. Simply, he’s been “the guy.” The number-one rider in the sport, the person every other rider is gunning for. That’s a lot of weeks at the top, a lot of weeks at the test track, a lot of weekends at the races where he cannot falter.

On top of it all, he’s taken on a leadership role off the track more prolific than we’ve ever seen before, from Wheaties boxes to SportsCenter appearances. Each particular thing is small, but they add up to time no one else at his level ever cared to spend. He’s also outside his motorhome late every Saturday night signing every last autograph.

Dungey has handled both roles amazingly well. He’s riding at an all-time level, and promoting even above that. That might be the biggest load anyone has ever carried in this sport, and just three weeks from now they’ll all start at zero and come back after him again in Lucas Oil Pro Motocross. I’m glad he enjoyed his night, even if he can’t enjoy some cake. For all he’s up against, he’s done an even more phenomenal job than simply hoisting another number-one plate can display.