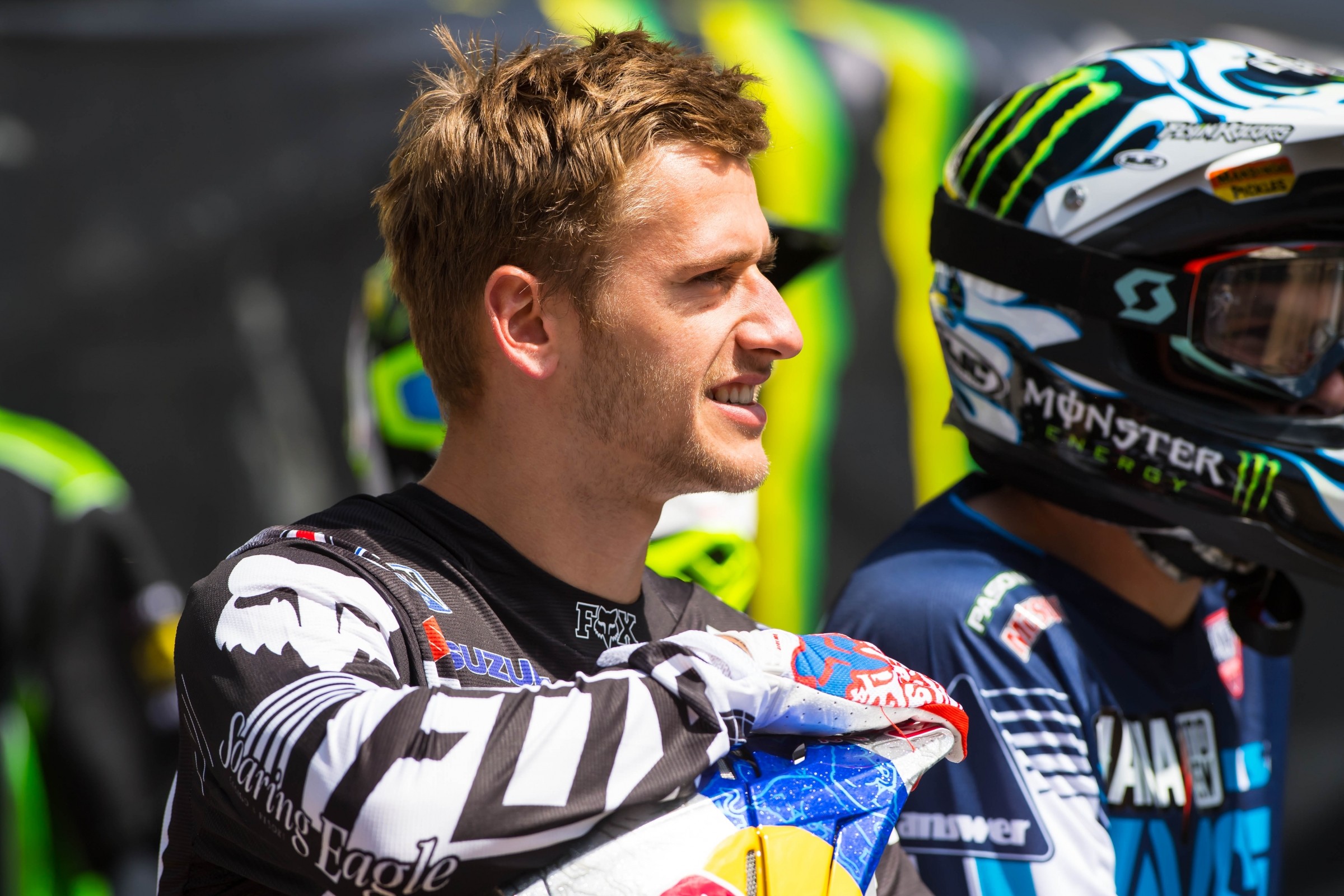 This was very much bordering on a lost season for Ken Roczen and Eli Tomac. Riders at their level (and pay grade) don’t enter a season searching for seconds and thirds, the goal is to battle for championships. But in this Monster Energy Supercross season, Ryan Dungey summarily whipped up on them and everyone else.

Dungey’s entire program was firing on all cylinders from the start. Roczen and Tomac were not. It’s taken four months but they finally seem to have their bikes where they want them, and it’s showing with much-improved rides. For the second week in a row, they went 1-2, with Roczen scoring the win and Tomac second.

It’s not often the riders that finish first and second find themselves overshadowed, but with Dungey wrapping the title, he got all the spoils.

The timing might be coming around for these two challengers, though. While Dungey has had his eyes on the coming supercross prize, and the resultant pressures that come with that, Roczen and Tomac have been able to work under the radar. Roczen fully admits he’s looking to get a head start on the nationals. Tomac still wants to find that supercross success. But for both, a whole new season and a second chance starts in three weeks when Lucas Oil Pro Motocross races into Hangtown. It appears these two will be much more ready for the opener there than they were at Anaheim.

Roczen has recorded 2-2-2-1-1 finishes the last five weeks. It’s his best stretch so far this season, and his New Jersey win actually marked his first ever back-to-back supercross wins. Things seem to be clicking for him just as the motocross season approaches. Is he thinking about that?

“I actually didn’t even ride supercross this week,” he said. “I was just riding outdoors and flew straight here. I haven’t ridden since Tuesday, so it was pretty long.”

After so many supercross reps this year, a missed week on the supercross track won’t impact him much anyway.

“The track tonight wasn’t in the best condition so I think even if I would have just done my normal schedule it would have been kind of awkward,” he said. “But otherwise it was pretty much a perfect night. I grabbed the holeshot and never looked back. I was racing the clock the whole time. We were really consistent and really fast and just kept clicking the laps down. That’s exactly what we were looking for. Like I’ve said before, in the last five or six weeks or whatever, we just made some changes to the bike and that seemed to work out great for me. I’ve been fit all year and really looking forward to the outdoor season now.”

Some riders don’t want to look at that head on and admit they’re going for the gold in the next series. They’ll usually say the right things about wanting to win the last supercross, first. But Roczen, the 2014 450 National MX Championship, isn’t denying it at all—he wants this championship badly.

“Absolutely. You’ve got to treat it with respect for sure, but I’m in the best shape I possibly can be in my eyes. We already did some great outdoor testing and we have a lot more up our sleeve. Right now life is good but we’ve got to definitely keep the focus. I think this is actually my first back-to-back wins ever in supercross. So, stoked about it. Honestly, there’s not too much to say about tonight. It was pretty much a perfect 20 lapper.”

It’s changing. At least I’m back to the front, where before I was scratching my head wondering why I was getting beat so bad

As for Tomac, he hasn’t had the success Roczen has this year, so far only notching a Daytona win. Last week’s podium looked to signal a turnaround, but we’ve seen that happen a few times this year only for the next weekend to be a struggle again. Finally, the New Jersey ride backed it all up—this turnaround might be for real.

“I feel like we’ve been good the past three weeks and we’ve at least gotten two podiums the times we’ve done it. It’s changing. At least I’m back to the front, where before I was scratching my head wondering why I was getting beat so bad,” said Tomac, echoing his thoughts from last week. “So now I can do what I want to do and race the track the way I want to and go where I want and I can fight for the top spot. It’s good to be here now and really I’m just looking forward to the next SX at this point.”

Tomac hasn’t been having any of this “just wait until outdoors” stuff. Last year’s amazing five-moto performance to start the nationals almost tainted his supercross rep in a way. Eli has shown great capability in supercross before—including a 250SX West Region title. He’s won some 450SX races with some great rides. But last year’s early outdoor blitz was just next level, and it might not even be repeatable. It was that outstanding, that amazing, that exceptional. In Eli’s mind, he’s just as capable of winning indoors as out. But there’s a good chance he’ll once again look much better outdoors this year because his supercross campaign got off to such a slow start.

Slow starts, by the way, prevented him from even having a shot at Roczen for the win in New Jersey. Eli logged the fastest lap of his heat race, but he started so far back that he didn’t even qualify. After making it in through the semi, he was left with a bad gate pick outside the starter’s box, which was no-go on the short start straight.

“A lot of times it almost does your whole night in, unless you rip kind of a crazy, lucky start,” Tomac said about that gate pick. “So I managed what I could. I came out pretty good for what it was and started to make some passes.”

Finally Tomac is riding like he was expected him to all year. He and Roczen would love to win one more supercross before the year is out, but whether their focus has shifted to the nationals or not, you can expect them to be much more capable from the get go in that series.