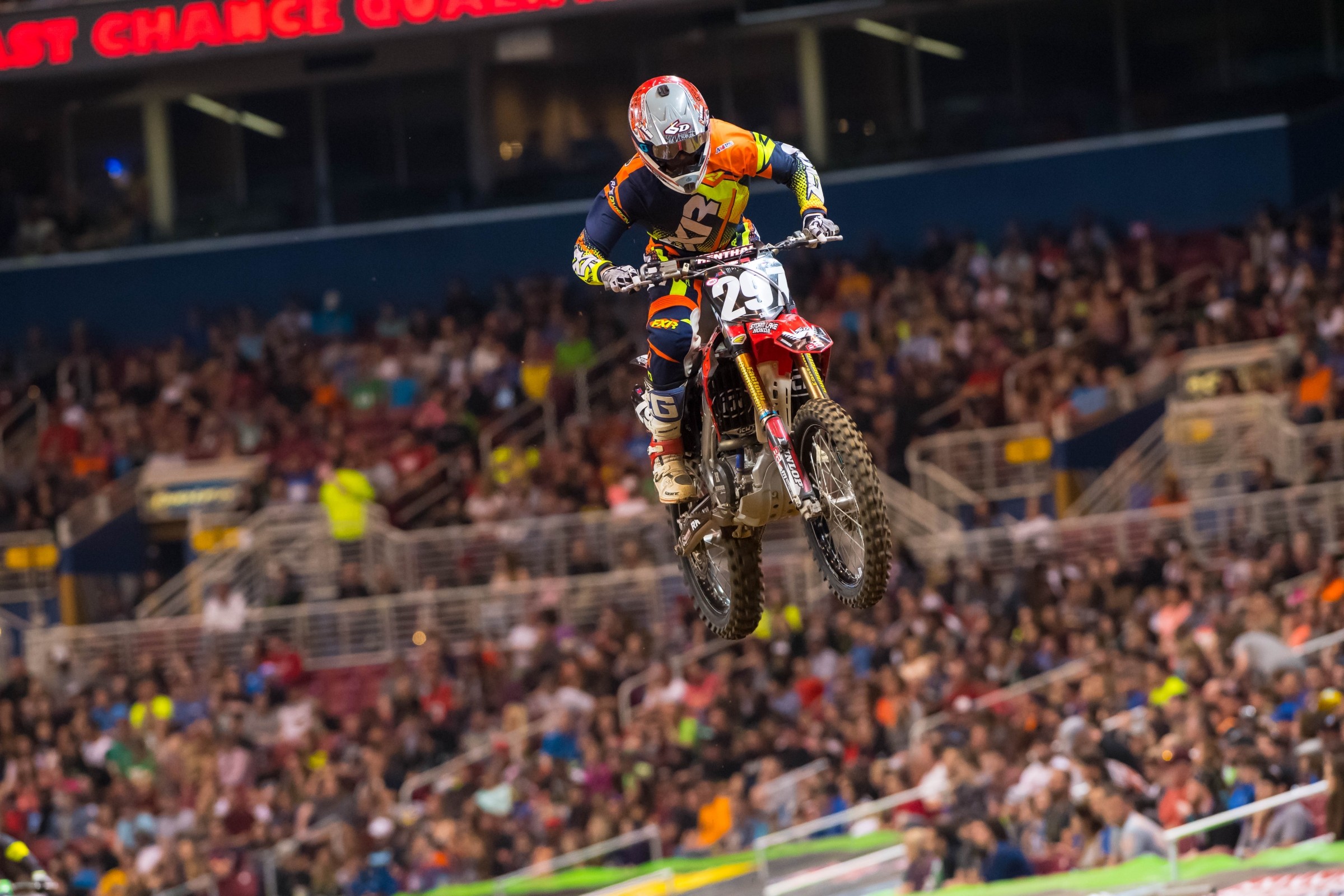 Minnesota has pumped out some extremely talented motocross racers lately. We’ve covered riders like Gannon Audette, Jesse Wentland, Zach Williams, Mitchell Oldenburg, the Martin brothers, and that Ryan Dungey guy many times. However, we have one more rider to add to that list now and he goes by the name of Henry Miller.

Miller first popped up on our radar at the opening round of Amsoil Arenacross in Cincinnati earlier this year. He had to cut his teeth in Ricky Carmichael’s Road to Supercross in order to earn his supercross license. Miller, who is on the verge of turning 19, showed some speed, but admitted he crashed a lot. He was able to gain the points needed to advance, and got all of his crashes out of the way.

“That was probably the most brutal thing that I’ve ever done,” Miller admitted. “It’s a whole different ballgame trying to teach yourself how to switch from motocross to arenacross. You just have to push yourself and not be afraid.”

A week before the 250SX East Region started, Miller decided to sign up for Atlanta and just made the deadline for the race. He drove his lone bike from Club MX in South Carolina (where he calls home for a part of the year) to Atlanta in a van and attempted to qualify.

As a matter of fact, Miller drives himself to all of the races without anyone else accompanying him. His hotel room is his van, and the fold down bed in the back of it makes for all of the comforts of home.

“It’s just me, my radio. I’ve got cruise control set, and I’ve got my bike in the back,” Miller says. “Toronto was a heck of a drive, though!”

Before the Toronto Supercross, Buddy Brooks of the TiLUBE Honda team approached Miller and offered him a bike to race—as long as Miller can get himself to the races. Miller and Brooks worked together during Miller’s amateur career and the two of them wanted to continue the relationship. Since the switch to the TiLUBE team Miller has made the past three main events in Indianapolis, St. Louis, and Foxborough.

“It gave me a lot more confidence and I put it in the main event,” Miller says of the switch. “It was a dream come true.”

Now that Miller is under the TiLUBE tent he has a mechanic at the races to help him out. Before he linked up with the team he would find a friend at the race to pack his gate and hold the pit board for him. Imagine having to get to the races, setting up your pit, doing bike maintenance, and getting everything ready in between practice sessions alone. On top of all that you have to find someone willing to help you out in the night show. It's stresses like these that Miller doesn't have to worry about for the remainder of the supercross series and part of the outdoors.

The upcoming Lucas Oil Pro Motocross Championship is going to be another huge test for the young Minnesotan. His TiLUBE Honda squad will only be making an appearance at a select few of the nationals. Miller will continue driving to each of the rounds, but at some of them he will just be a lone wolf. He’s hoping he can pick up a mechanic for the day at some of the rounds. Miller is also looking for a co-pilot for the races that are farther away. The lonely drives can get tough. It leaves Miller with a lot of time to think.

“It teaches you about life when you’re doing everything alone and spending your own money,” Miller said.

It might sound like a crazy feat to some, but for Miller this is normal and he isn’t complaining about his situation at all. According to him, he’s chasing the dream he’s had since he was a little kid and he isn’t going to let anything stand in his way.

“We’re at the make it or break it point in my career,” Miller said. “Hopefully I can break through and make this last another five years or so.”

In his spare time Miller likes to golf and fish, but those times are few and far between. Right now Miller is focused on making it to the next race and solidifying himself as one of the top up and coming riders in the sport of motocross.

“There is nothing I would rather do than ride my dirt bike everyday of the week,” he said. “I would never give up on it. It’s a good feeling when you enjoy what you’re doing everyday.”