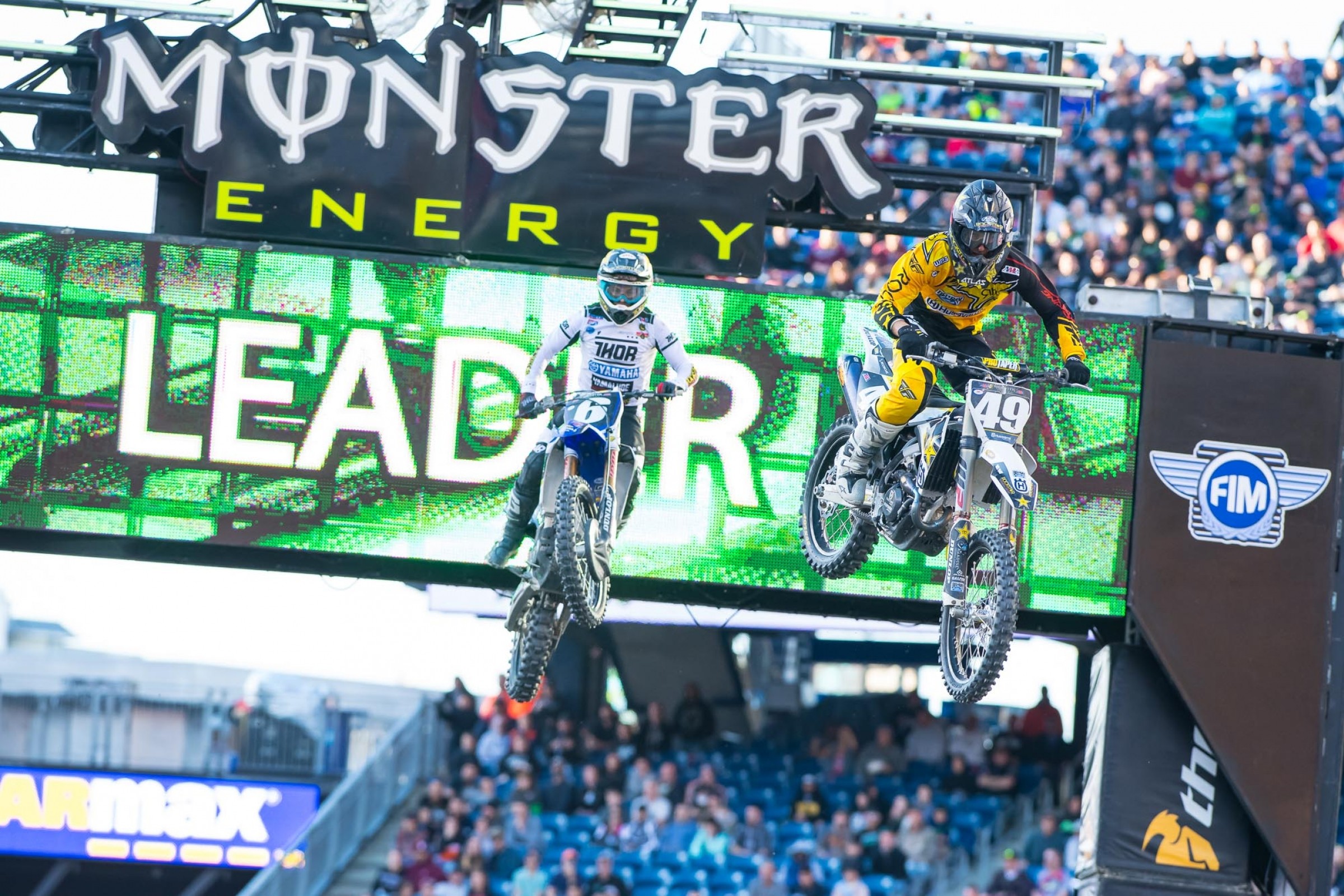 So did the Foxboro supercross work? Don’t let the crowd shots fool you—this is a big stadium. The crowd was solid and they were hearty as expected. The morning started with rain, and the track was a mess. Whatever, the sun eventually came out and by the night show the track was actually dry and slick in spots, and the water did no damage besides adding a few ruts. The fans still milled around the pits despite the early rain, because they don’t care about that up here. And the big stadium floor allowed for good, long lap times, and the weather wasn’t even cold thanks to the daytime schedule. Overall, seemed like a solid event.

But no one liked it better than Soaring Eagle/Jimmy John’s Suzuki’s Ken Roczen. He was simply on fire. “The first step I took on this property I was feeling it,” he said on the podium after taking the win. “The track was tough, it was hard and slick in parts and sticky in others.” Roczen was just unstoppable on this night, he passed Ryan Dungey and got away in both the heat race and the main event, finally flipping the script after three close seconds to Dungey at the last three races. Roczen says he’s really happy with his bike now and is starting to regret not having made these recent changes earlier in the season.

Roczen needed to stop Dungey’s win streak to stop Dungey from clinching the championship, and he’s working hard to do that. Monster Energy Kawasaki’s Eli Tomac keeps putting in the work, too. This supercross season had long grown into a disappointment for him, but the team was adamant that they hadn’t changed their schedule to focus more on testing for Lucas Oil Pro Motocross. They still want to win in supercross, and during testing this week they made some progress. It showed. He also got Dungey in the main and made Roczen work for the win, keeping heat on him for most of the race. A few mistakes down the stretch let Roczen get away, but second is still good momentum for Eli. He said the track was tough but actually kind of fun. The slick spots in the corners led to some flat tracking action, which he liked, but Tomac admitted the whoops where really gnarly and rutted out. He rode it in safely at the end.

We didn’t see the same Ryan Dungey tonight as usual. After holding back everything Roczen could throw at him at the last three races, this time he didn’t have an answer for him. Dungey still fought hard, though, trying a few moves to repass Roczen, and trying to hang with Tomac, too. But once they got him they eventually got away, and then he was left battling with Jason Anderson for third. Dungey’s 30-straight podium streak was on the line here, and Anderson eventually made the pass. Then Anderson lost his front brake, he assumes a rock bent his front rotor. Anderson was able to maintain a decent pace but the lack of a front brake led to mistakes, especially in the 180-degree corner heading into the whoops. That led to mistakes in the whoops, and eventually that opened the door for Dungey to get him back.

“I tried to get the tires to the ground and get maximum traction, but I was having a hard time doing that,” said Dungey on the Supercross Live! broadcast. “Ken and Eli they were going for it. Just one of those tracks where it wasn’t coming as easy to me as some of the other ones. Once Jason got by me I was able to settle in a little bit, get back on him and make the pass by the whoops. I just didn’t have anything for them [Roczen and Tomac] tonight.”

A string of Hondas followed. Trey Canard didn’t get the start he needed to make a podium run. Sound familiar? He finished fifth on the Honda HRC machine. Justin Bogle’s recent run of strong finishes continued with a sixth. Take out Indy’s rut fest and Bogle’s been a top ten stalwart—and top five threat—for the last month on his GEICO Honda. Cole Seely returned to racing after missing a few rounds with an injury, he was quietly effective and netted seventh. He only got back on the bike on Monday and had only ridden supercross on Wednesday!

Chad Reed was buried off the starts once again on his Monster Energy/360Fly/Chaparral Yamaha, running 12th for a lot of the race before moving forward to ninth. He found Autotrader.com/Monster Energy JGR Yamaha’s Weston Peick ahead of him on the final laps and tried hard to get him, but Peick hung tough to net eighth.

Josh Grant has been riding much better lately as he gets back into the racing groove with Monster Energy Kawasaki. But he threw a solid finish away with a crash while running seventh. The opened the top ten for Red Bull KTM’s Marvin Musquin. Musquin, still working his way back from a wrist injury, struggled most of the day with the big whoops.

The 250 race was excellent. When Malcolm Stewart took the early lead it looked like it was over, but the course broke down in a hurry and his lines stopped working. Suddenly the chase pack of Martin Davalos and Shane McElrath were on him, and then it almost looked like Daytona for a moment, as Mookie held the lead but was also holding everyone up! Mookie had to yield to Davalos and Jeremy Martin, but regrouped for third. Malcolm actually wasn’t bummed after the race, saying he will take positives out of a consistent finish on the podium. He also finished just ahead of championship-rival Aaron Plessinger, pushing his points lead to five points. With Malcolm, the rub has always been consistency, so when he collects a podium on a tricky track, and avoids last weeks’ three-crash type of carnage, he finds it hard to complain.

Been an up and down season for Davalos, winning the opener, missing Toronto with visa issues, and then crashing the last few races. Then here he rides smart, solid and strong, working his way from third to first and holding up under heavy pressure from Jeremy Martin to take the win. After the race Davalos told us he might have tried a little too hard and rode too loose the last few weeks, he was trying to go for it since he was way back in points. Also, his teammate Zach Osborne discovered something new on the bike in testing, and Davalos tried it and liked it. He stayed focused this time and took his second win of the year.

Oh what could have been for Jeremy Martin. His start was terrible but he was fast. He caught up to Davalos and it looked like the pass was coming, until he made some mistakes in the whoops and Davalos got away. Martin is now 14 points down on Stewart, he really could have used the three extra points that come with the win.