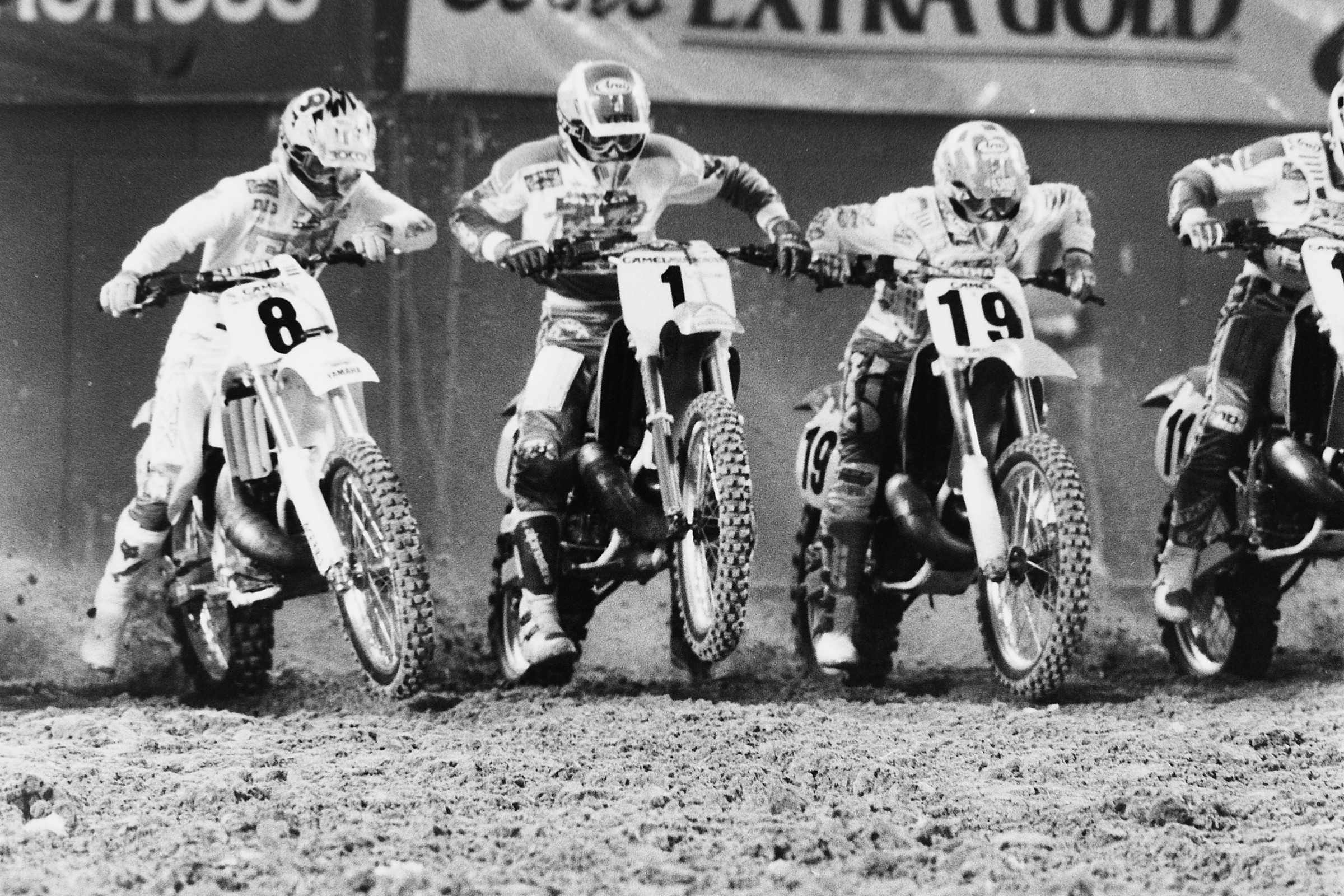 Twenty-six years ago, Foxborough, Massachusetts, a small town of 16,865 inhabitants situated 25 miles southwest of Boston, served as a host for supercross. While the new Gillette Stadium will host the 15th round of the 2016 Monster Energy Supercross Championship, in 1990 the old NFL venue was named Sullivan Stadium, the series was known as the Camel Supercross Series, and each of the 18 individual main events was dubbed the Coors Extra Gold Superchallenge.

Saturday, June 2, 1990, was the scheduled race date for round 15 of the 18-round Camel Supercross Series and a titanic three man fight for the then blue and yellow colored number one plate (those being the colors of Camel cigarettes) had broken out. The players were defending series champion Jeff Stanton of Team Honda, Jeff Matiasevich of Team Kawasaki and 1989 250cc World Champion Jean-Michele Bayle, also of Team Honda. Also players in what had been a highly entertaining, if not erratic, supercross title chase were Team Yamaha’s Damon Bradshaw and veteran rider Jeff Ward. Add to the mix exciting rookies like Mike LaRocco, Mike Kiedrowski and Larry Ward, and former champions Rick Johnson and Johnny O’Mara, and you can see why many consider the 1990 season one of the best in the sport’s history.

The rider carrying the most momentum into Foxborough was Jean-Michele Bayle, who after scoring the first supercross main event victory of his career two months prior in Irving, Texas, had won four of the last six series rounds. Hailing from Manosque Alpes-de-Haute-Provence, France, Bayle, who initially stunned the American motocross community a year earlier by winning the season opening Gainesville National in Florida, had become an army of one in trying to become the first non-American to win the world’s most prestigious motocross title in its modern form.

Bayle was on such a charge at mid-season that despite missing two races earlier in the season due to an elbow injury, the No. 22 Honda rider had fought his way all the back to hold down the third spot in the title chase with 231 points. Just ahead of him in first and second were Jeff Matiasevich and Jeff Stanton with 253 and 246 points, respectively.

“There’s four races left, and I’m going to think of it as a four-race series, like we’re starting over at Anaheim,” said Matiasevich after placing sixth at Giants Stadium in New Jersey, the round leading into Foxborough.

Added Jeff Stanton: “All I have to do is beat him [Matiasevich]. But I have to beat him by bigger margins.”

A few days before the Foxborough event, Bayle commented in Cycle News: “Right now the championship will be very hard to attain. But I will try to win race after race. I want to be the one to win the most races this year.”

28,020 fans filed into the first race held at Sullivan Stadium since Team Honda’s David Bailey won the 20-lap main event there on July 28, 1984, to watch the first of four straight weeks of racing to decide the winner of the 1990 Camel Supercross Series.

Bayle won the first of the three heat races that would set the main event, racing across the finish line nearly 10 seconds ahead of nearest challenger—Guy Cooper of Team Suzuki. Damon Bradshaw, the 17-year-old 250cc class rookie who had won the Anaheim, Houston, Pontiac 1 and Charlotte rounds of the series, won heat two.

Jeff Ward, who had raced to third at Foxborough six years prior, was triumphant in heat three. When the gate dropped to launch the 20-lap main event, it was Bayle and his Cliff White-tuned works Honda motoring out of the first turn in the lead, with Ward, LaRocco, Stanton, Matiasevich and Bradshaw giving chase in that order.

Five laps in, Bayle was beginning to put daylight between himself and second place rider Ward. A few seconds back, LaRocco and Stanton tussled over the third place position. At the halfway mark Bayle continued to lead comfortably, while Ward and LaRocco held station in second and third. A somewhat unremarkable 10 laps later, it was Bayle meeting the checkered flag in victory, his fifth of the season.

Ward and LaRocco rolled home in second and third to finish out the podium. Stanton, meanwhile, placed fourth on the night, and in doing so, picked up valuable points on Matiasevich who placed a lowly ninth.

“The most important thing is that I gained points,” said Stanton afterwards, citing the fact that he was now a mere point behind Matiasevich in the fight for the championship. “However, I have to get it together and beat Bayle. He keeps coming on strong and I have to beat him.”

Back in the pits after a winning ride he made look effortless, Bayle was a man of few words, saying, “I got a very good start and was very smooth. I did not make mistakes and I win again.”

What about Matiasevich? Wrote the late Henny Ray Abrams who covered the race that night in New England for Cycle News: "Matiasevich, on the other hand, had nothing to say and was unavailable for comment after the main."

Matiasevich was a rookie to the 250 class and his results were starting to wane late in the season. But remember Stanton saying he would have to start beating Bayle? The man from Michigan stepped up and did, capturing the two ensuing rounds at Oklahoma City, Oklahoma and San Jose, California. By then he had enough of a points cushion to cruise to sixth in the Los Angeles Coliseum to win his second consecutive Camel Supercross Series championship by a mere seven points over Bayle.

Stanton enjoyed that while he could, as a year later Bayle absolutely dominated American motocross, winning not only the 1991 Camel Supercross Series, but the AMA 250cc and 500cc National Championships, as well. But Bayle’s win at Foxborough had served as an early warning shot that his takeover of American racing was coming soon.

As a topical footnote to that night at Foxborough, it was Team Suzuki rider Denny Stephenson winning the 125cc Eastern Regional main event and with it the 1990 AMA 125cc East Region Supercross Championship.