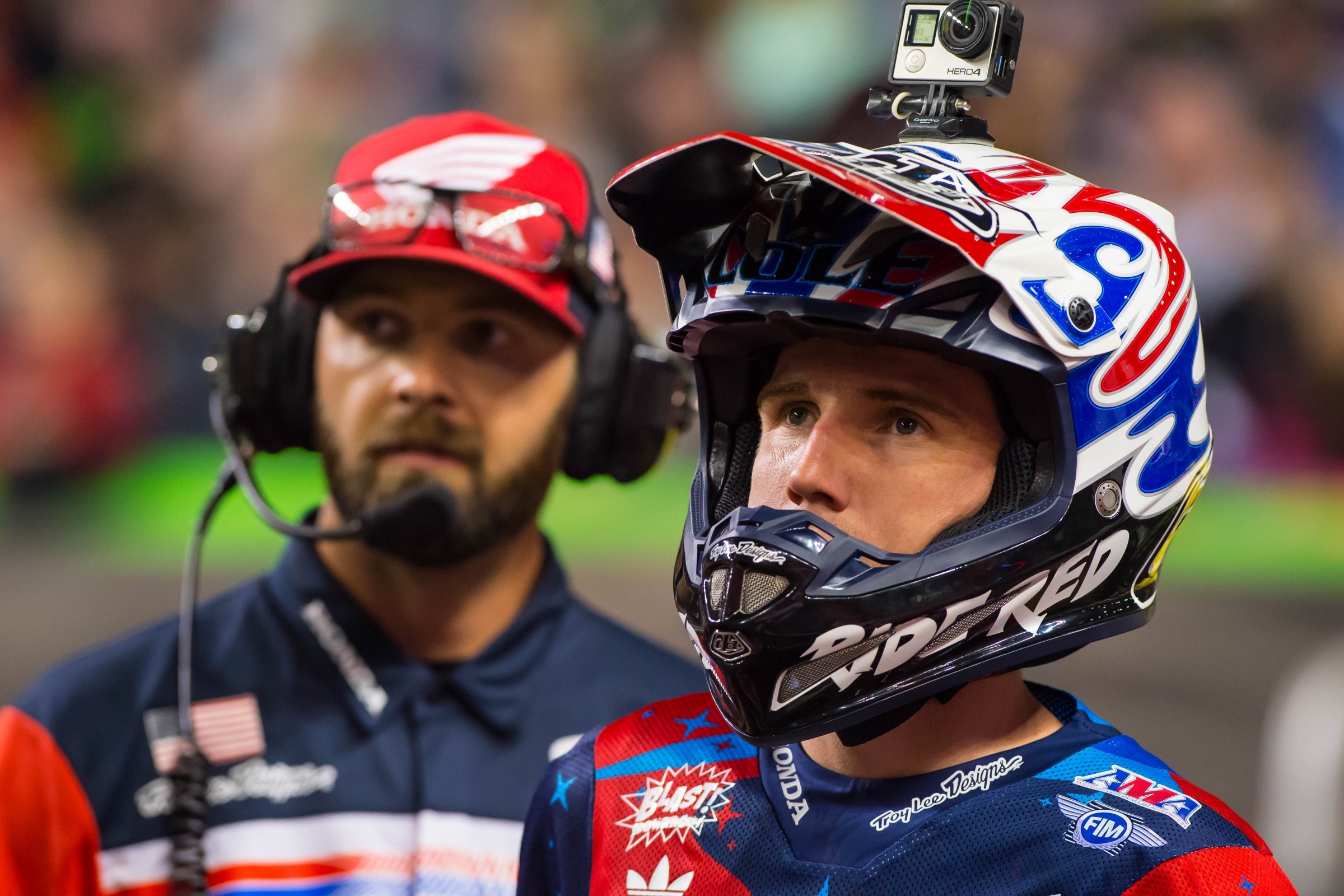 Kyle Chisholm – Shoulder, Concussion, and Humerus
Comment: Chisholm dislocated his shoulder, broken his humerus, and sustained a concussion in San Diego. Some recent X-rays revealed his elbow is healed, and Chisholm is now currently working on strengthening his shoulder with therapy. Chisholm is focusing on being strong and ready for the start of Lucas Oil Pro Motocross.

Tommy Hahn – Foot
Comment: Hahn suffered a grade-three medial sprain in his right foot in Toronto. He tried to get back to racing in St. Louis but it didn’t work out. He’ll miss the rest of supercross.

Wil Hahn – Collarbone, Labrum, and Scapula
Comment: Hahn is out for three to four months after getting caught up in a big crash in Atlanta.

Davi Millsaps – Ribs, Lung
Comment: Millsaps crashed in Daytona and sustained three broken ribs, a severely bruised and partially collapsed lung, and some internal bleeding. Depending on how things go in the immediate future there’s a chance Millsaps could race in East Rutherford, but nothing is certain yet.

Christophe Pourcel - Internal Bruising
Comment: Racer X has learned that Rockstar Energy Racing Husqvarna’s Christophe Pourcel will sit out Round 15 of Monster Energy Supercross from Foxborough, MA this weekend due to internal bruising sustained in a crash at Indianapolis.

Andrew Short – Concussion
Comment: Short was involved in a midair collision with Phil Nicoletti and Wil Hahn in Atlanta. He’s unsure if he’ll be able to line up for more supercross.

Cole Seely - Back
Comment: Seely chipped his C7 vertebra while practicing at Milestone MX a few weeks ago. He missed Santa Claria, Indianapolis, and St. Louis, but will race in Foxborough.

James Stewart – Ankle, Back
Comment: Stewart jarred his back in St. Louis and later crashed when he and Weston Peick got together in a heat race. He will miss the remainder of supercross and focus on a return outdoors.

Tevin Tapia – Wrist
Comment: Tapia cased a jump and broke his scaphoid in the preseason. He’s back on the bike, and is getting ready for Lucas Oil Pro Motocross.

Dean Wilson – Knee
Comment: Wilson crashed and tore his ACL and meniscus, and sprained his MCL. He had surgery, then had to go back under the knife when signs of infection were discovered. He plans on returning to racing roughly halfway through the Nationals.

Daniel Baker – Ankle
Comment: Baker will miss the rest of Monster Energy Supercross after tearing some ligaments in San Diego.

Zach Bell – Collarbone and Infection
Comment: Bell was hoping to be back for Santa Clara, but contracted a bacterial infection after having surgery to repair a broken collarbone suffered in Oakland. The infection required a second surgery, followed by a six-week period on an IV antibiotic. Bell said on Twitter he saw his doctor this week and is only about 40 percent healed. If you’d like to help Bell financially, go here.

Adam Cianciarulo – Wrist
Comment: Cianciarulo broke his wrist during a preseason crash. He will return for Lucas Oil Pro Motocross.

Kyle Cunningham – Wrist
Comment: Cunningham suffered a fracture of the radius in his right wrist Toronto. He’ll be back racing in Las Vegas.

Justin Hill – Concussion
Comment: Hill crashed during practice in Detroit and hit his head and wasn’t able to race the night show. He hasn’t raced since and will miss Foxborough.

Jackson Richardson - Shoulder
Comment: Richardson injured his shoulder and decided to have surgery—he had some damage that’d be giving him trouble. He’s back riding, but since he’s 250SX West, Las Vegas would be the soonest we’d see him line up for more Monster Energy Supercross.

Jesse Wentland – Fingers
Comment: After crashing in Indianapolis Wentland issued the following statement on Instagram: "After getting landed on by another rider I suffered a deep cut in between my pinky and ring finger and a broken middle finger in my hand. Thank you to all of my friends, family and team/sponsors for the support. Hope to be back racing as soon as I can."