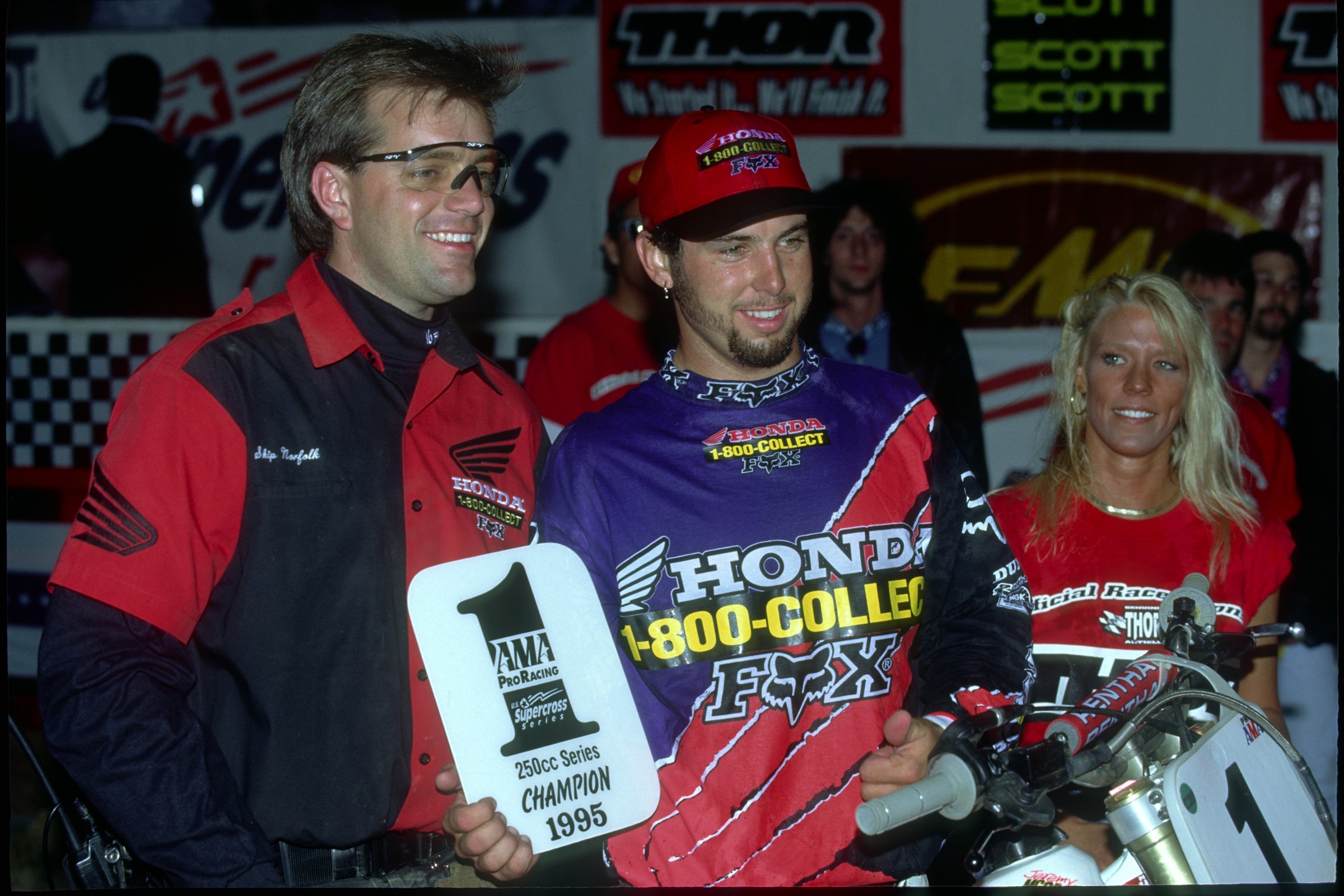 This weekend outside of Boston at Gillette Stadium, home of the New England Patriots, Red Bull KTM’s Ryan Dungey will very likely claim the 2016 Monster Energy AMA Supercross Championship. That’s great news for Dungey fans but not for anyone who likes to see championship battles go down the last race, or even the last laps of the last race—because after this weekend there will still be two races left! With talk percolating of a new “race for the championship” format coming to supercross as early as 2017, we thought we would go back and see just how many times in series history a title fight has gone down to the final round, beginning with the first Yamaha Super Series of Stadium Motocross, back in 1974.

That 1974 series used a strange golf-like scoring system where riders earned points similar to their race results—one point for first, two for second, etc.—and the rider with the lowest total number overall was declared champion. Pierre Karsmakers had a score of fifteen over seven total motos (three mains at Daytona, four at Houston); next-closest was the late Rich Thorwaldson with 37 points, then the late Buck Murphy with 53.

In 1975 the series had more traditional scoring, though not like we have today. Jimmy Ellis won all three rounds that counted (Dallas, Daytona, Houston) as well as the one that didn’t (the Superbowl of Motocross at the Los Angeles Coliseum, which was still an Inter-Am race). He totaled 450 points to Marty Smith’s 248, so it’s safe to say he clinched early.

The 1976 series switched to the current points structure, and it went down to the last round, where Kawasaki’s Jimmy Weinert beat Honda’s Pierre Karsmakers by 10 points (327 to 317).

In 1980 the series ballooned to seventeen races and was won by Mike Bell, who clinched it at the sixteenth round, the second half of the Philadelphia doubleheader. He won the title over Kent Howerton 395 to 346.

In 1981 the series was back down to eleven rounds, and Mark Barnett clinched one round early, at the Los Angeles Coliseum, the tenth round. He beat Mike Bell by 294 to 247.

Donnie Hansen won the 1982 title (a supercross first for Honda), and he clinched it early at the eleventh of twelve rounds, again at the Los Angeles Coliseum. And good thing, because he ended up crashing in September before the last round—November 16 in San Diego—and never raced again.

The 1983 AMA Supercross Championship consisted of sixteen races, and it went down to the wire, with David Bailey stealing the points lead and eventually the championship after Mark Barnett’s bike broke at the next-to-last round at Foxborough, Massachusetts. Bailey won by just two points, 420 to 418, over Barnett.

Eighty-four was kind of funky, in that there were two “AMA-only” races run by Jim France at Daytona and Talladega, and fifteen races held by the other promoters, collectively called In-Sport. Johnny O’Mara won the add-it-all title with two rounds to spare, topping Rick Johnson by a score of 591 to 538.

In 1985, the series was chopped back down to eleven rounds and went down to the wire, with Jeff Ward winning by two points (229 to 227) over Broc Glover after the AMA decided not to penalize Ward for riding backward on the track, as it had done previously to Danny “Magoo” Chandler and others. It should be noted that a funky scoring system awarded heat-race points, plus there were TWO main events held at every round but Daytona. The idea was scrapped after one year.

The 1986 AMA Supercross Championship started out as a barnburner, with the instant classic duel between David Bailey and Ricky Johnson at the Anaheim opener. But after Bailey got banged up his Honda teammate Johnson eased away with the title and clinched in the eleventh of twelve rounds.

Jeff Ward took his second AMA Supercross Championship in 1987 with much less drama than ’85; he clinched the title at the thirteenth of fourteen rounds.

Team Honda’s Johnson returned to the top in 1988, winning his second AMA Supercross crown by clinching at the ninth of ten rounds over Kawasaki’s Ron Lechien, 233 points to 190, with Ward third at 177 total points.

Johnson seemed like he was going to clinch early in 1989, too, winning five of the first six rounds, but then he tangled with Danny Storbeck at the Gatorback National and snapped his wrist. His new teammate, Jeff Stanton, stepped into the void left by RJ’s injury and ended up clinching the title at the penultimate round in Oklahoma City. Stanton was more than two races ahead of Lechien at the end of the series, winning with 302 points to 245 for the Dogger.

We saw a much closer championship in 1990, as Jeff Stanton battled throughout with his new teammate, the imported Jean-Michel Bayle. Stanton needed all eighteen rounds to win by seven points after the finale.

Bayle was extraordinary in 1991, clinching at the sixteenth of eighteen rounds on his Cliff White-tuned Honda CR250, then announcing his plans to quit SX/MX for a new career in road racing. Honda made him stay for one more season, and he basically sleepwalked through ’92, leaving all three of his titles—AMA Supercross, 250 Motocross, 500 Motocross—up for grabs.

One of the most dramatic championships of all was 1992. Jeff Stanton would battle back into contention after early frontrunner Damon Bradshaw crashed spectacularly at Indianapolis. Then the last round of the series was postponed for nearly a month due to the Rodney King riots in Los Angeles. When it finally all went down on a hot Saturday afternoon at the Los Angeles Coliseum, Stanton won and seized the championship from the rattled Bradshaw by just three points.

The Jeremy McGrath era would follow, the King of Supercross reigning supreme for seven of the next eight years, clinching the title early in each of his championship seasons—the first on Hondas, the last three on Yamahas.

- In 1993 McGrath clinched at the fourteenth of sixteen rounds over Mike Kiedrowski.

- In 1994 McGrath clinched at the fourteenth of fifteen rounds over Mike LaRocco.

- In 1995 McGrath clinched at the thirteenth of fifteen rounds over Larry Ward.

- In 1998 McGrath clinched at the fifteenth of sixteen rounds over Ezra Lusk.

- In 1999 McGrath clinched at the fourteenth of sixteen rounds over Lusk again.

- In 2000 McGrath clinched at the fifteenth of sixteen rounds over David Vuillemin.

The one outlier was 1997, the year Kawasaki’s Jeff Emig beat McGrath for the AMA Supercross crown after Jeremy had made an eleventh-hour switch from Honda to Suzuki. Emig needed every one of the fifteen rounds to win the title by fifteen points over McGrath.

In 2001 Kawasaki’s Ricky Carmichael took over at the top of the class and won the last thirteen rounds of AMA Supercross in succession. It should be no surprise that he clinched at the fourteenth of sixteen rounds on his Chad Watts-tuned KX250.

In 2002 Carmichael again clinched early, this time at the fifteenth of sixteen rounds, only he was now on a Honda. He topped Yamaha’s David Vuillemin, the early points leader, 356 to 321, with third-place McGrath way back at 250.

In 2003 Carmichael was widely expected to dominate, and for the first ten rounds he mostly did. Then Chad Reed got hot and ended up winning the last six races in a row. But Carmichael finished second every time and limited his point losses to eighteen points. In the end he kept the title by seven points over Reed.

Carmichael missed a shot at a fourth straight title due to injury in 2004, and Reed was right there and ready to take over. He would have clinched early over Kevin Windham but was docked 25 points for using a fuel with trace amounts of lead in it. He won by nine points at the Las Vegas finale, but it should have 34 for the Yamaha-backed Reed.

In 2005 Carmichael returned, now riding a Suzuki RM250. He clinched at the sixteenth of seventeen rounds and was exactly 25 points ahead after Reed won the final race in Las Vegas.

The 2006 season was a crazy one. Due to the confusing and overlapping AMA Supercross and FIM World Supercross Series, two point standings were listed: the AMA one, which included Daytona but not the two races in Canada, and the FIM one, which included the two Canadian rounds by not Daytona. In a real thriller, both titles came down to the final round. Carmichael claimed the AMA Supercross crown by three points over Stewart, and Stewart claimed the FIM crown over Reed.

In 2007 the Kawasaki-mounted Stewart clinched his first AMA Supercross Championship at the sixteenth of seventeen rounds.

The 2008 fight did go down to the last round, with Reed winning the final race and beating GEICO Honda’s Kevin Windham by 13 points after a late surge by the veteran.

The 2009 AMA Supercross Championship was very heated between Stewart, now on Reed’s old Yamaha, and Reed, who moved his #1 plate over to Makita Suzuki. Stewart ended up winning the championship at the final round over Reed by four points (377 to 373), though the winner of two of the last three rounds was Ryan Villopoto.

In 2010 Makita Suzuki’s Ryan Dungey clinched at the fifteenth of seventeen rounds, but he was getting tons of pressure with four rounds to go. Monster Energy Kawasaki’s Villopoto got off hard at St. Louis, snapping his leg and ending his run at the title.

Villopoto got his vengeance in 2011, winning by four points at the last round after holding off a valiant charge by Honda-mounted Reed.

Monster Energy AMA Supercross saw an odd ending in 2012. Ryan Villopoto clinched at the thirteenth of seventeen rounds, having won nine of the first thirteen rounds. At his home race in Seattle, the fourteenth round, RV put his foot down in a corner and twisted his knee badly enough to require surgery, knocking him out of Lucas Oil Pro Motocross and the final supercross races. Even missing the last three rounds, Villopoto topped Davi Millsaps by a score of 323 to 266.

More of the same in 2013, with Villopoto clinching at the sixteenth of seventeen rounds, with Millsaps again the runner-up, this time by a score of 371 points to 338.

Villopoto’s fourth and final title was clinched at the fifteenth of seventeen rounds in 2014. One day after the final race, he announced that he had a knee problem and would not race the rest of the summer. He would never race another Monster Energy AMA Supercross.

Finally, last year, Red Bull KTM’s Dungey clinched at the fourteenth of seventeen rounds. It marked KTM’s first AMA Supercross Championship in the premier class. He is now on the verge of doing it at the fifteenth round of the current series, which takes place this weekend in Foxborough, Massachusetts.